PEZ Roadside Stage 13 TT – It’s the day we’ve all been waiting for – the 54km time trial in Albi to shake out this Tour’s finalists. The weather took a turn for the worse, with pouring rain replacing oppressive heat – and some rider’s faired worse than others. PEZ chased Saunier Duval-Prodir’s David Millar on his run. 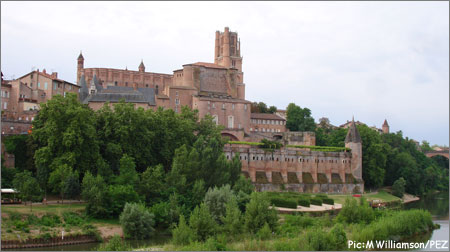 Aside from the crap weather today, Albi is a beautiful place.

Michael Albasini (Liquigas) rolls-past, our man is next – there he is, he doesn’t look happy, but who would in this damn rain? Into the start house, and the speaker tells us that he’s “Champion d’Ecosse” – not that we remember, but it’s good to hear the old country getting a plug. 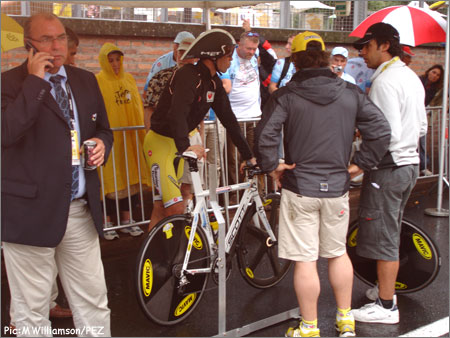 Millar’s bike gets the thumbs up.

David Millar (Saunier Duval-Prodir) still has traces of the sweat rash on his legs that had the Spanish TV commentators making jokes about him not being used to the sun. The count-down beeps and we’re off, within a couple of hundred metres the Renault’s clock reads 60 kph, ahead, Millar flicks through lethal-looking roundabouts at 40-plus as we leave Albi behind and head into the lushest of green countryside. 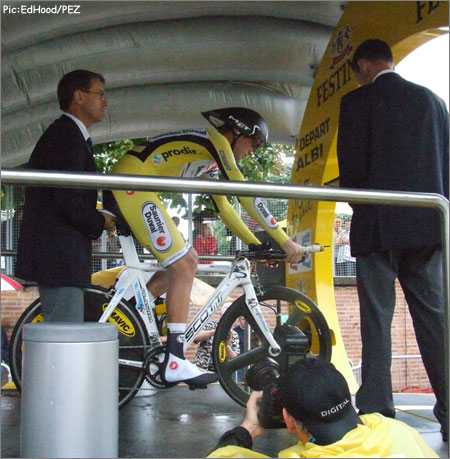 The Saunier team cars ahead of us splash through huge puddles soaking crowds of spectators, who laugh as the wave hits them. The first drag and he’s out of the saddle to keep the revs going; we make his cadence 100-plus most of the way round. Over the top, back in the tuck and he’s cruising at close-on 60 kph as the road drops gently to long, well-surfaced flat, straights. But the trend is upwards and one little drag follows another, to sap the strength of the weak. 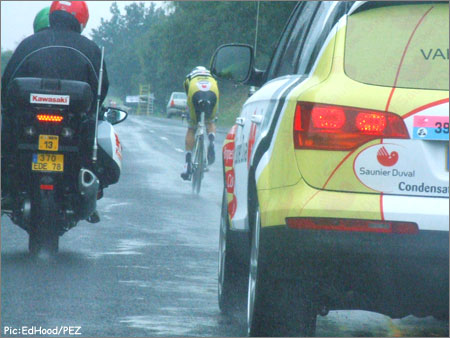 After wind, rain is the TT-specialists’ worst enemy.

The rain is drumming on the car roof as he flicks through a series of mini roundabouts at Frejairolles; 45 K to go, he’d do that in one hour dead, that’s the speed he’s rolling-at as he breasts the rise. He’s fearless on the wet bends, never missing a beat whilst we screw-up our faces and gasp. Still the tendency is up, one little hump after another; the Belgian camper vans are out in force up here, but the inhabitants of Flanders never get too excited about a chrono – it’s not like it’s a real race, is it? 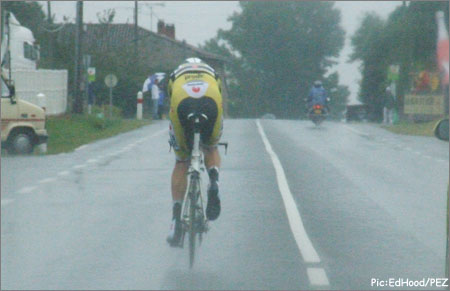 Despite the drags, Millar never leaves his tuck; the road is narrower now and it’s hard for us to see him behind two Saunier cars and a mini-bus full of VIPs. It’s raining so hard now that most fans have given-up trying to keep dry and are resigned to being soaked to the skin. We’re passing maize fields now, and there’s Albasini, that gap was two minutes at the start. As another drag lifts ahead of us, Millar is past the Italian – with 24 minutes racing gone. 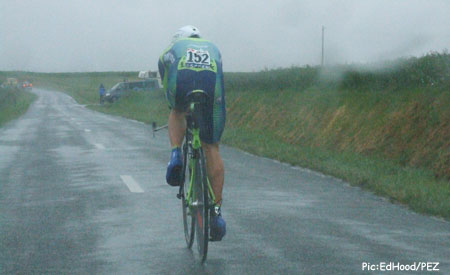 Albasini tries to lift his game but his bobbing shoulders contrast with Millar’s seemingly-serene progress. A roundabout – Millar arches round it without lifting from the tuck; Albasini eases and sits-up, that’s difference between a decent time triallist and a great one. The road dips then climbs steeply, Albasini has gone. Here’s the big descent – sinuous, dangerous and long.

Millar is clocking 60/70/80 on the slick tar which snakes-down the side of the tree-lined valley, his bike-handling is impressive, his long, lean body is out of the tuck and he’s on the brake lever part of the bars as he slices each bend line-perfect. 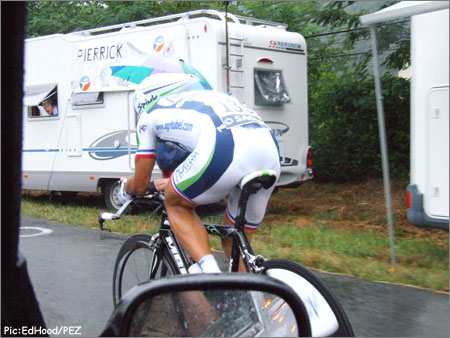 Nicholas Vogondy – another of Millar’s victims.

Ambialet, at the bottom of the decent and Millar claims another victim – Nicholas Vogondy (AG2R), he doesn’t put-up a struggle as the tall Scotsman whistles past without a glance. We can see that Vogondy’s not messing-around, his face is showing pain, but Millar is just too quick.

We’re back on flat roads now, after the excitement of the descent and we can admire Millar’s poetry in motion – flat back, flowing cadence, straight and true across the water-logged tar. A motor cycle commissaire warns the Saunier team car about following too close and they back-off. 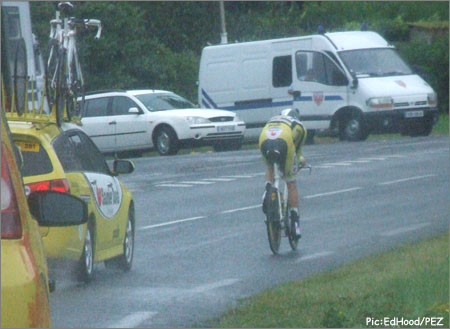 A couple of kilometres later, the motor cycle moves-on and the car is back within inches of Millar’s back wheel. There’s a left-hander and ‘bang!’ the climb starts, he sits-up immediately, hands on the arm rests, spinning a small gear and looking good. On one of the hairpins he’s down to 20 kph but he’s soon back up to 40 and has to freewheel a bend as he’s going so fast.

It’s a long, long climb and the rain continues to pour as he raises a sprint over the top. There are 15 fast kilometres to go and he’s back in the tuck at 60 kph. He’s piling-on the pain, 70 and his legs buzz like bee’s wings. There’s a roundabout at 10 to go, he flicks round like it doesn’t exist. 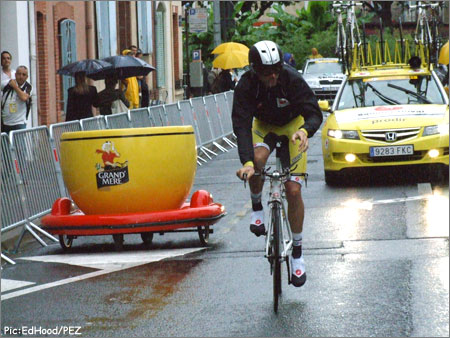 It’s flat, wide and fast now – another roundabout, he’s so graceful, a sweeping smooth line across the dangerously slick tar and then out of the saddle at once to get back up to speed. A level crossing then a 90 left – 50 kph, wow! There’s the 5 K banner and we’re in the suburbs of Albi as the team car horn blares in his ear, just inches behind him.

It’s ‘full-gas’ now as he clips the curbs and runs straight from one apex to the next. It’s 50-plus, all the way, past cafes, shops, schools, offices and drenched fans. With 2 K to go, there’s a cobbled right-hander – no chances taken here. Into the long finishing straight and the clock says 70; there’s the flame rouge and he’s shoveling the last coal on the fire. At 200 to go, we peel-off left as he continues his solitary way to the line, those long cranks whirling. 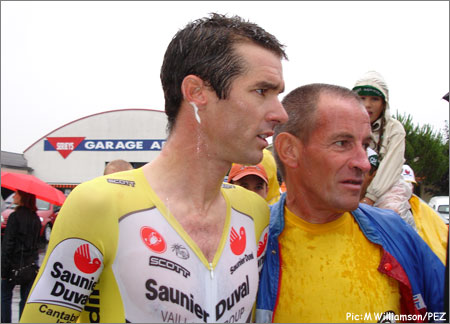 His face hides nothing.

We catch-up with him after the line; there’s no mercy when you are a star – the Eurosport microphone is stuck in his face and a fan needs an immediate picture of himself with Mee-larr. The team car has vanished and he has to borrow a top from Astana to protect himself from the still-torrential rain – it’s not all glamour being a pro. 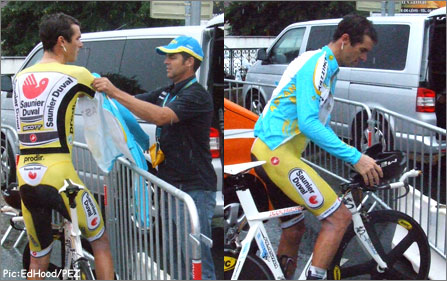 But what did the clock say? When he finished he was third fastest, behind Bradley Wiggins (Cofidis) and Leif Hoste (Predictor/Lotto) both of whom had dry conditions most of the way round – a luxury that he certainly did not enjoy.

He would end the day in 20th position, 3:27 behind the screaming Vino – a disappointing day at the office. 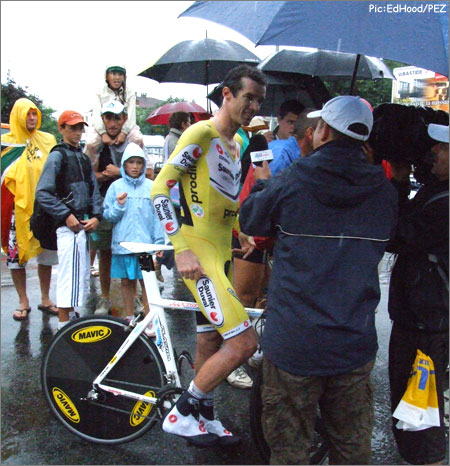 David – can you give us a gew words?