TdF Stage 3 Roadside – Say “au revoir” to the British Isles and “bonjour” to the continental coast. Today’s Tour stage takes us into the French and Belgian countryside…these small towns are what Le Tour is all about. 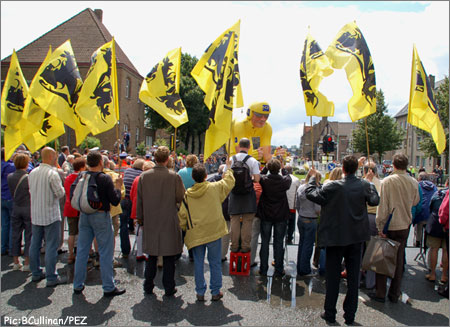 Diksmuide is one of those charming, quaint, simple little towns that you dream about. Stuck in a corner of the Flanders region of Belgium, the Lion of Flanders was roaring as the caravan made it’s way through under sunny skies early this afternoon. It seemed like the whole town turned out to welcome le Tour to their homeland.

But this is passion with a purpose. You see, there’s a big criterium in Diksmuide right after the end of the Tour de France…and the locals wanted to find way to attract attention to their late July crit. 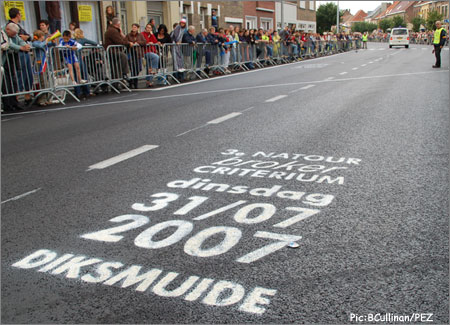 So, they had a brilliant idea. Since this is a major dairy product area of Belgium, why not promote the local products and the crit at the same time. So, they painted an unofficial, diagonal “prime” line right across the route of the Tour, smack dab in the middle of Diksmuide.

But it gets better. The city fathers came up with a unique prime prize. Instead of awarding the first rider to hit their line, they decided to give a prize to the last Belgian in the peleton. 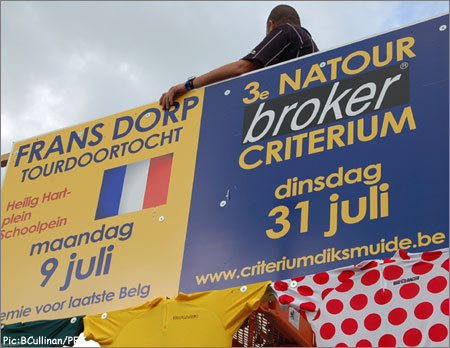 And what does that Belgian “lantern rouge” receive? The prize, for being the last of their countrymen across the line is Diksmuide… 250 kilograms… a quarter of a metric tonnes… of butter. I kid you not.

And, since they can’t stop the race and pack 250 kilos of butter into a musette for the lucky last-placer, they hold the butter in reserve, divide it up into smaller 250 gram pieces, and then sell all of those bits of butter, with all the money they raise going to local charities. 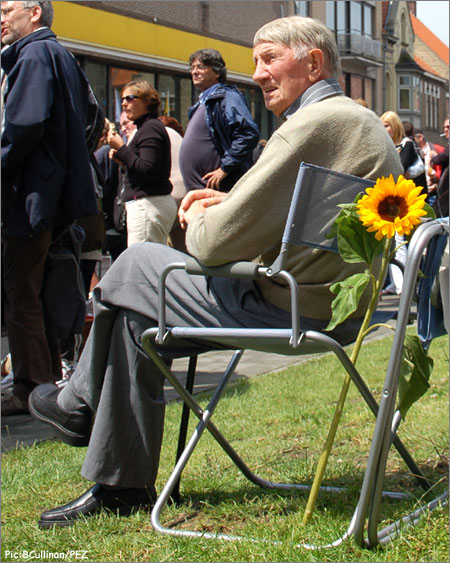 Oh, did I mention that the whole town turned out? Both old and young lined the streets of Diksmuide today. The race veterans copped the best spots along the route… it’s been six years since the Tour passed through these parts. You get the feeling that some of these guys have been sitting here since then. 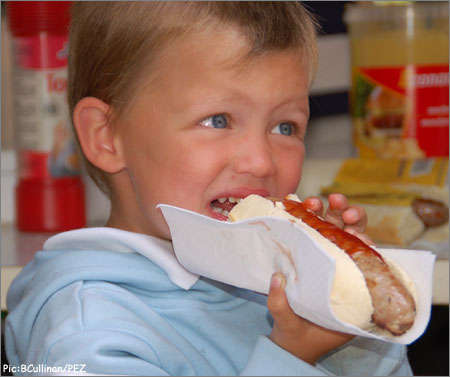 This little guy wasn’t even born when the Tour came through Diksmuide in 2001. He seems a bit more interested in his bratwurst than the bicycles. 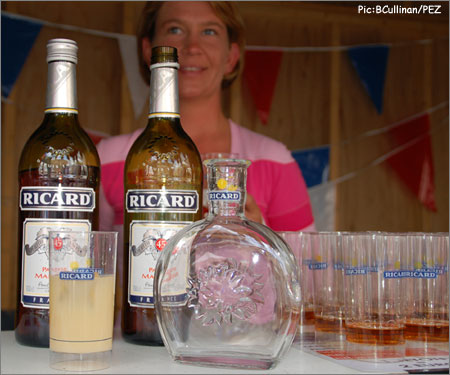 Warning…keep the kids away from this stuff. There’s a local concoction make from Ricard, a French liqueur. Mix in a little water and a couple of cubes, and it really brings out the anise flavor. After a dozen or so of these, you’re ready for battle. 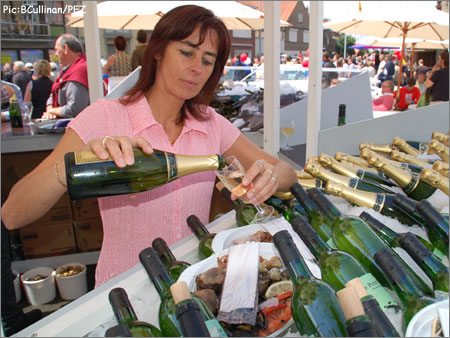 There was food… and drink… for all, but this was the ultimate. Chilled seafood, and champagne that seemed to flow from bottomless bottles. 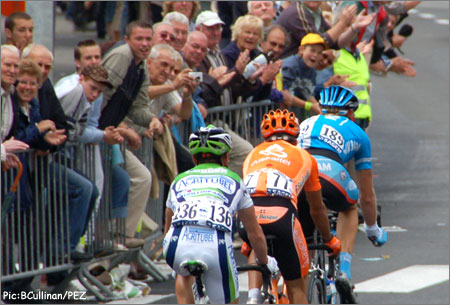 Then it was time to get down to business in Diksmuide. The helicopters overhead signaled the arrival of the first riders…this group of three got off the front…

…who were followed a few minutes later by the CSC train, pulling the peleton along as a pretty good clip. 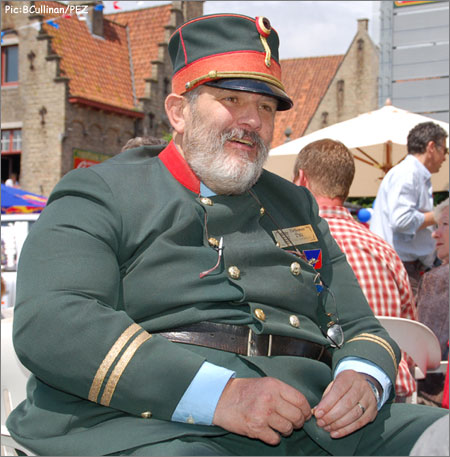 The Diksmuide city fathers were out in all their regalia, keeping a close eye on the race… and watching for the last Belgian in the bunch. 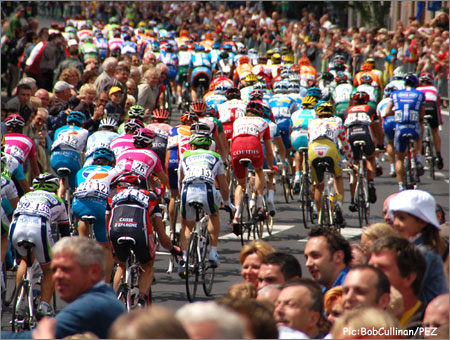 Back up front, the masses snaked their say through the streets of Diksmuide… 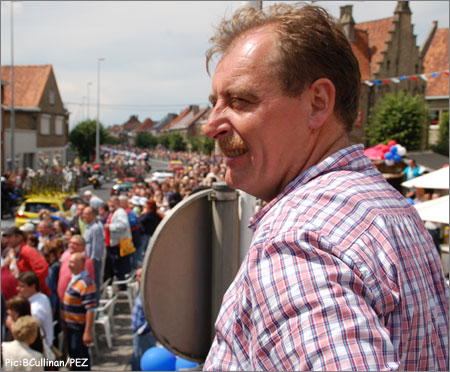 …while the official spotter looked for the last Belgian in the race. The butter prize winner was getting close. 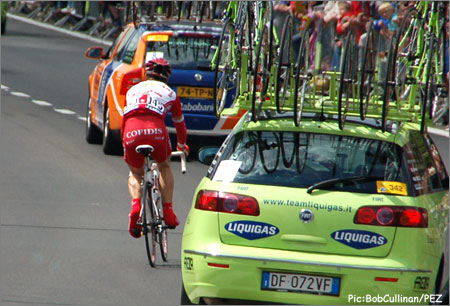 Just when we thought we’d have to go to the video tape to sort-out the winner of the prize, there he was. A roar went up from the crowd as Cofidis rider Nick Nuyens crossed the “butter line” to take the prize. Make no mistake about it… Nick knew the lactate was on the line, and he seemed to hang back a bit from the peleton, to insure that he’d be the last Belgian in the bunch. Nice goin’ Nick. 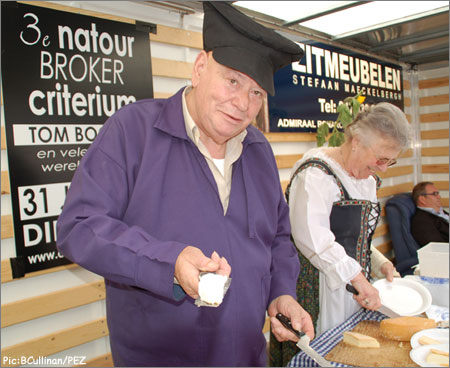 And there were consolation prizes, too. Everybody in Diksmuide dove into the cherished Belgian cheeses as soon as the race passed by. And yes, this photo does give a whole new answer to the question ‘who cut the cheese’. 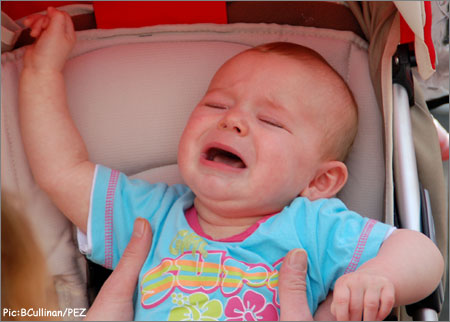 So, why was this little guy so unhappy? He was probably pouting because he didn’t win the butter today. C’est dommage, mon ami. 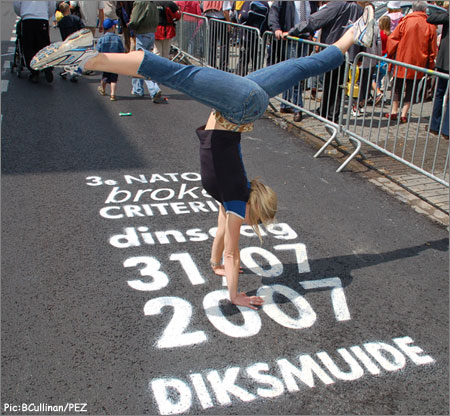 But others were jumping for joy. Yup, this is Dr. Kristin Wingfield, my official PEZ driver and translator for le Tour. She popped a major handstand right on the course, to remind us all to support the big Belgian criterium later this month. Oui, oui.

Vive la France? Not yet… vive la Tour! We’ll begin in Belgium on tomorrow, and wind up just east of Paris in Compiegne. Another flat and fast day is ahead… but it’ll be hard to beat the Belgian butter line in Diksmuide.