While the shock of Vino’s positive test threatens to spoil a lot of fans’ hope for the cleansing of cycling, the fact remains there’s still a whole Tour de France to finish. It’s ‘rest day’ in the Pyrenees, so PEZ dropped in on Discovery Channel and Predictor-Lotto for a little catch-up.

Pez Sez: – Like most cylcing sites PEZ is getting hammered today as news of Vinokourov’s positive test stuns us all. At this pont we have no more info than is already available on a few other websites, but will publish anything new we get. As is our policy, we won’t waste your time by regurgitating what you already know, and will continue to focus on what we love – bike racing. For any readers considering tuning out of cycling – I urge you to stay true to the sport you love – we owe our support to the guys who are clean – and they need us fans too. So keep watching the Tour.
————–

“Rest day? Yeah, that’s the day we do the rest of the work!” As always, Disco’s ace mechanic, Alan Buttler has the quip to suit the situation, but we know what he means. (And that’s two T’s in Buttler for that eagle-eyed Pez rider who noted I got it wrong, last year!) The first three days, we’ve been on the road constantly, and Martin has been doing a lot of driving; even last night, after the stage, en route to our hotel in Lourdes, we had to cross the Col d’Aspin – no rest for the wicked.

Lourdes is like a religous Disneyland, many of the local populous are so fed-up with “pilgrims” that they barely acknowledge your existence, albeit, the staff in our pizza restaurant, last night, couldn’t have been nicer.

Don’t be fooled by the traditoinally impressive sites – anyone who’s been to Lourdes know its a wacky place.

I woke-up at my usual time this morning and after washing up, I did more washing – clothes that is – if you travel light then you have to keep up with the laundry. I let Martin sleep a little late, he had a migraine last night, with all that driving (and listening to me) whilst I found a cafe where I could catch-up on the emails and get a game-plan together for the day.

Back at the hotel we took advantage of that most wonderful thing – lobby wi-fi; no salle de presse for us tomorrow! The charge for a day’s wi-fi, on le Tour is now 30 euros – how do they do it so cheap? We had pics to get back to Pez for a couple of features we have planned, then it was time to go.

No Tickee, no entry at Disco’s hotel.

DISCOVERY CHANNEL
So, what how does a mechanic spend his rest day? To get the answer, we travelled to Pau and the Hotel La Navarre, with its security guard on the gate. “It’s a good job Lance isn’t here, if he was, you just wouldn’t get in,” Monsieur Buttler told us.

“Apart from the fact that we get a bit of a lay-in, up at 08.00 instead of 06.30, and there’s no driving, a rest day is every bit as hard as a stage day.” We asked him to elaborate; “The first thing is that all the reserve bikes have to be given a proper wash, usually we don’t need to, or they perhaps get a bit of a wipe.

Then there’s the fact that the guys go out for a run, so the race bikes all have to be washed, after they come back. A thing that a lot of people forget too, is that whilst the Tour is a huge event, it’s not the only race on the calendar. There’s a race programme to consider after the Champs Elysees; we have San Sebastian, Eneco Tour, Tour of Poland, Tour of Germany and the Vuelta all coming-up. That means you have to be thinking ahead all the time, it’s like playing snooker, they say you should be thinking four shots ahead. 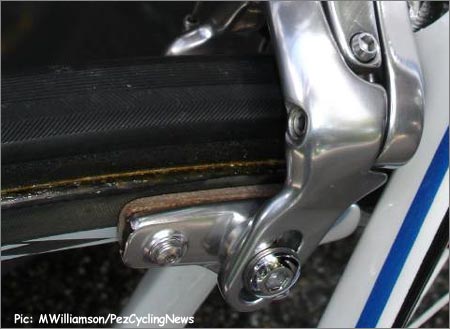 For example, tomorrow is the last day in the mountains, so all the mountain wheels can go, but there’s no point in sending them back to the Service Course, they can go straight to San Sebastian in the small truck.”

We had noticed Alan’s colleague, Craig Geater carefully brushing tubular cement onto cotton base tapes and asked if that’s one of the rest day chores; “Yes, we ride tubulars exclusively now, so the rest day gives us a chance to catch-up with cementing tyres on. In previous years we rode clinchers on the spare bikes, but now that all the wheels – road, mountain and time trial, are carbon, we’ve changed 100% to tubulars. The problem was that when you ride brake blocks for carbon rims, then change to aluminum rims, you go through brake blocks like nobody’s business.”

PREDICTOR-LOTTO
A quick breenge (Scottish word, meaning to proceed, with all speed) down the D117 to Ousse and a visit to the Hotel des Pyrenees, HQ to Predictor/Lotto and our man in the heart of the peloton, Dario Cioni.

I explained to Dario that our readers would like to know about how a pro spends his rest day; “I try to sleep as long as possible, this has been a Tour where we haven’t had early starts, usually we have been getting-up at 08.00, but today I slept until 09.45. But you have to remember that we didn’t finish dinner until 10.30 pm last night, so I stayed-up late because I did not want to go to sleep with a full stomach.”

On the subject of food, what do you eat on a rest day? “Normally for breakfast on race day, I would have pasta, but today I just had a light breakfast like I have at home before training. At arouind 2.00 pm we had a light lunch and we’ll have dinner a little earlier than usual, at around 7.30 pm, pasta, meat and vegetables. One of the good things about a rest day is that everybody has more time, so we can have a longer massage than usual.”

We had met-up with Dario, Fred Rodriguez and third-placed on GC, Cadel Evans earlier in the day as they went for their rest day spin.

How long were you out for, Dario? “I’m tired today, it was a very long, hot, hard stage yesterday, so I just did one hour. Cadel did around two hours; the entire team went out together, but the Belgian guys wanted to stop for a coffee. Cadel didn’t want to stop, so I went with him because I had the spare tyre and pump(!)”

I asked about what the riders do with the rest of their time on rest days; “Today I organized my suitcase, all the cold-weather clothing can be packed-away now. Also you catch-up on your washing, watch some TV, read a little and go on the internet to see what is on PEZ [Ed. – and no, I didn’t make that up, I’ve got a witness!]. Some guys sleep in the afternoon, but I don’t, in case it puts me off sleeping at night; I go to bed quite late – maybe 10.30 or 11.00.”

Whilst we had the man across the table, we asked about his thoughts on team mate, Cadel Evans race; “At the start of the Tour, one of our goals was to get a podium place, so if Cadel holds third until the end the team will be happy. After watching Rasmussen and Contador yesterday, it’s hard to see how they can be attacked; but you never know, maybe they took a lot out of themselves yesterday?

It was time for PEZ to head for Lourdes, write and post that copy, emails those pics. It’s now 19.30 and we still have another piece to write – oh yeah, Vino just tested positive. Rest day – not today.

Carmichael Sez: Hurry Up To Recover