One of the things about getting a bit older is that you actually recognise the best days of your life whilst you are living them, rather than years later. The last ten days have been some of the best of my life. I should also say that the faith and trust that Richard Pestes places in me to try and transport you, our loyal readers, to the greatest race in our sport, means an awful lot to me.

Let’s Start With The Highs
Following David Millar in the time trial at Albi was memorable, until you follow a pro in a time trial, you have simply no idea of how fast they are, how supple they are and how downright courageous they are. Watching Millar on rain soaked descents and slick roundabouts had us shaking our heads in admiration. 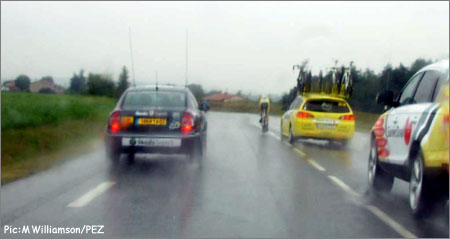 Driving the parcours on two stages was special, the Tour attracts a gold-plated audience. There may be the odd bunch of high-spirited kids who get a tad too excited, but in the main, it would be hard to meet nicer people. The first thought we had when the Rasmussen story broke, was; “those poor Danish fans we met, they’ll be heart broken.” 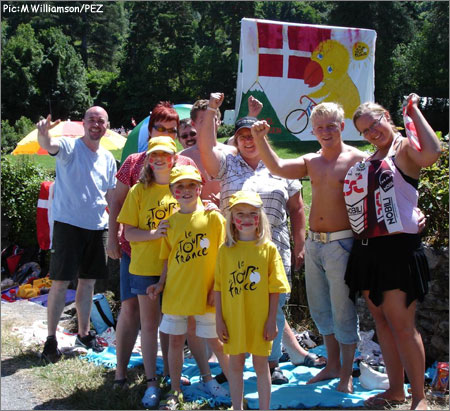 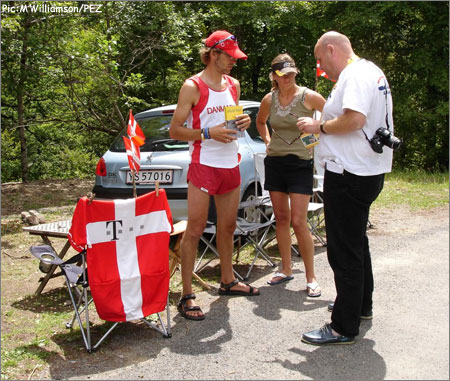 I try to avoid over-using superlatives, when I write, but the Pyrenees deserve them. The scenery takes your breath away; sometimes you can only stare in wonder as one range follows another. There are sculpted peaks, jagged peaks, rounded summits and all manner of rock formations – amazing. 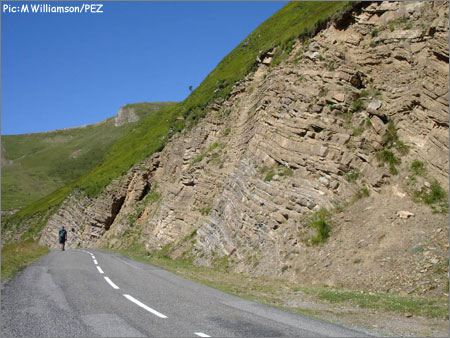 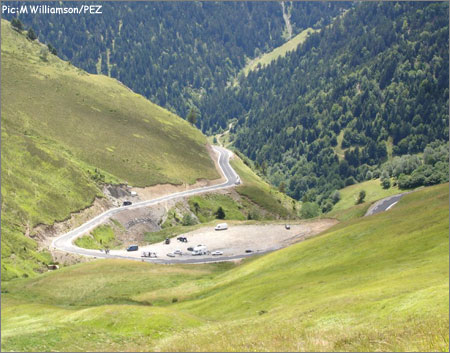 Little things creep into your mind, like the young guy with the horn attached to his track pump on the Col de Bailes, honking-away like a man possessed, just for the sheer joy and hell of it, sending averyone around him into helpless laughter. 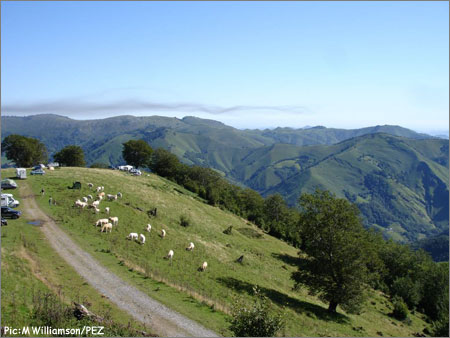 It was great to sit down with Dario Cioni for a soft drink, and a chat on the rest day. To see his laugh when we told him he was good-looking enough to be a male model once he quit cycling. 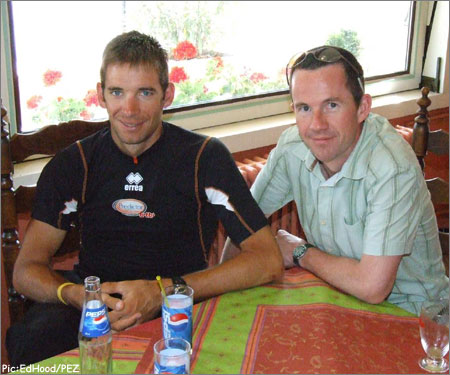 In Cahors we scurried around for almost two hours setting-up pictures of bikes, then did an interview with James Alexander, the QuickStep bus driver. As the circus left town, we felt that we’d earned a drink. There’s not much finer than sitting at a street cafй with a cafй au lait and a cognac watching a French town sliding back to post-Tour normality; and that’s not to mention the pretty girls. 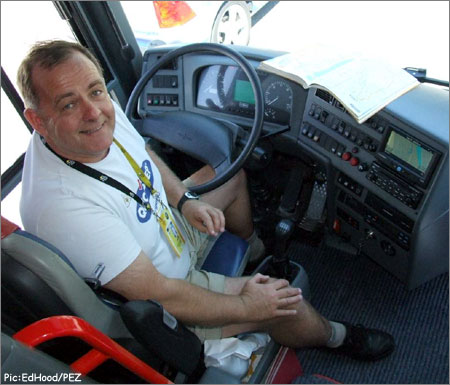 Watching Sandy Casar win the stage into Angouleme was a highlight too. The Tour and France itself needed that stage. As the famous athlete, Roger Bannister once said; “All other factors being equal, it’s the man who wants to win the most that the victory goes to.” That day, Sandy Casar was that man – the look on his face is what bike racing is all about. 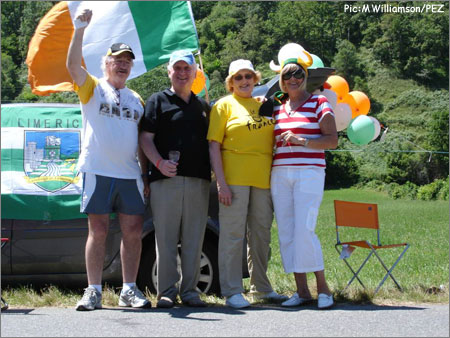 The last TT was a highlight too, watching Charly Wegelius flick his Cannondale through those little villages without missing a beat as we had to pump on the Renault’s brakes, just makes you think just how good the pros are. That same day, the sun blazing-down, rolling through the vineyards of cognac, the road rolling to a horizon lined with camper vans, the helicopter above us, Martin honking the horn trying not to run-over any toes as the flags waved and the crowds roared – so special. 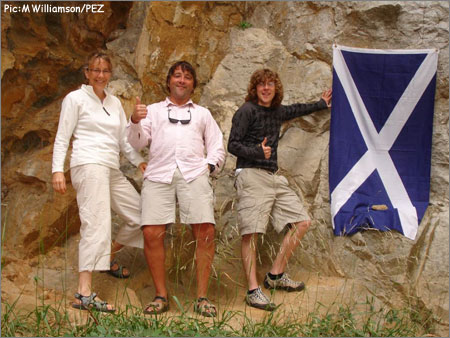 The Champs Elysees, the final laps and the youngest rider in the race at 21, Geraint Thomas who we interviewed just a few days before, on the front and riding hard for his room and Barloworld team mate, Robbie Hunter.

There are so many; as I opened by saying – some of the best days of my life.

Was It A Great Tour?
A great experience for the mind and soul. But, a great Tour? No. Call me old-fashioned, but sport is supposed to be about the best things in human beings – dedication, determination, persistence, pride, heroism, humility and honour, to name but a few.

I remember sitting in front of the tv in 1998 as the Festina nitemare unfolded, my eyes moist with tears at what was happening to the sport I loved. We consoled ourselves with; “it can only get better after this?”

But just last year, I was right-there in Strasbourg as the scandals broke on ‘Black Friday.’ “This has to be a watershed!” I thought, but the Floyd affair proved me wrong.

Last year I left the race at the mid-point, when Richard told me this year that I was going all the way from the Albi chrono to Paris, I was so happy.

But Vinokourov’s ride in that first TT puzzled me, his collapse the next day confused me, then when he rose Floyd-like from the ashes next day, I said to Martin; “It’s only a matter of time before Astana explode.” It gave me no pleasure to be proved right.

The next day, I wrote an; “everything will be fine, now that Vino has gone” type-piece. I had no sooner emailed the story than Cristian Moreno was being bundled into the back seat of a squad car.

Late that same night, Rasmussen was gone. Martin and I sat numb, in a tacky, late night restaurant in Lourdes, what was there to say?

Contador: The (Un)Fortunate Winner?
The race started next day with no yellow jersey; explain that to the kids; ‘he was fired for telling lies.”

After the last tt it had changed a little; “after the time trial today, it looks like you have won the Tour, do you take drugs?”

Cheating, lying, deceitfulness, suspicion, lack of trust, disbelief – these are not the values our sport stands for. The UCI is complaining about the ASO asking Astana and Cofidis to leave the race – why not? If that’s what it takes to get the teams to get the message, then so be it.

We’re flying home to Scotland as I write this, the guy next to me is reading an English newspaper, The Independent, the headline says; “Contador holds on to earn hollow but unlikely victory.” If Bert is clean, it’s such a shame his win is being devalued. If he’s not, then he shouldn’t be in the race.

And, there’s a coda; as I walked down the steps from the plane at Prestwick, I checked my BlackBerry for messages, there was one from my buddy Dave; “Mayo positif for EPO.” 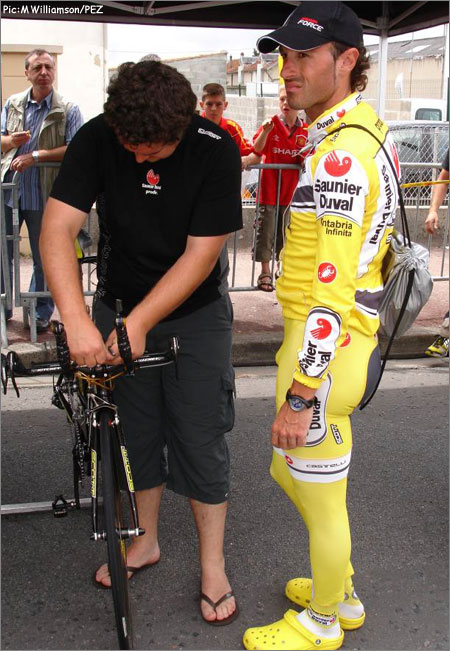 The icing on the cake?

The appropriate response is never far away from my lips on the 2007 Tour; “saddened but not suprised.”

I hope that I do the Tour for PEZ in 2008, all I ask of the ASO and UCI, is that I can aplaud the riders doing the winning, with no doubts in my mind.