Orthez, in the foothills of the Pyrenees… it’s a beautiful morning, the mist is burning-off, and long shadows from the greenest of trees have groups of spectators using them as shade from what is aleady a hot sun. The road is rolling gently through the maize fields and meadows and every few seconds I have to stop writing to wave to wide-eyed children. 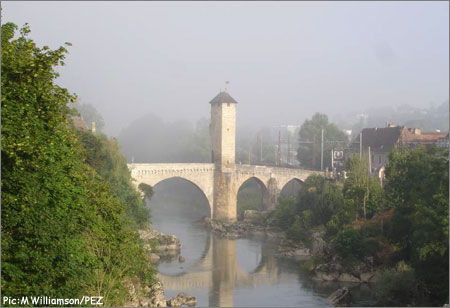 It’s marvellous to be here, to be part of this – but in the back of my mind there’s an image of a man lying on a bed in a locked and guarded safe-house; blood is trickling down through a tube into his arm. The blood is not for any medical condition, it’s extra blood, to boost his oxygen up-take by up to 10%. It’s going into his system so he can deceive all these people standing by the roadside; people who have decorated their villages, organised fetes and are standing, waiting on the greatest free show of human endeavour on earth. 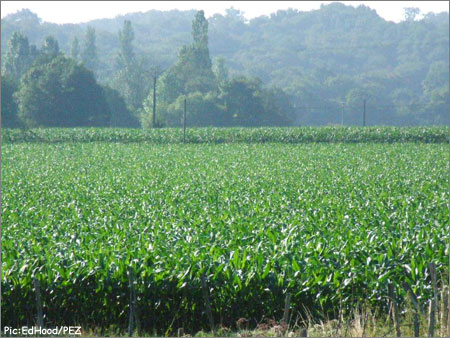 Let’s see, if today, we can wash that image out of my mind. The parcours aren’t too demanding yet, but dead-ahead, dark and spanning the whole horizon, are the Pyrenees. One third, two first and two hors categorie climbs. “Bienvenue au Pays Basque” says the sign, thank you, we’re very happy to be here. it’s not all sweetness and light though, there’s ETA painted on the tar – the Basque separatist movement who blew-up Tour cars a few years back (and I’ve just learned, caused problems today)

The road is flat now, but huge dark shapes fill the windscreen. Tardets at 48.5 kilometres, there’s a “Go Julian Dean” sign – Kiwis. We stop, there are Aussies there too; “what’s your take on the Vino situation, guys?” I ask. “Great, that’s Team Mafia gone, all we need now is for Ras to go and Cadel’s laughing!” Aussies! 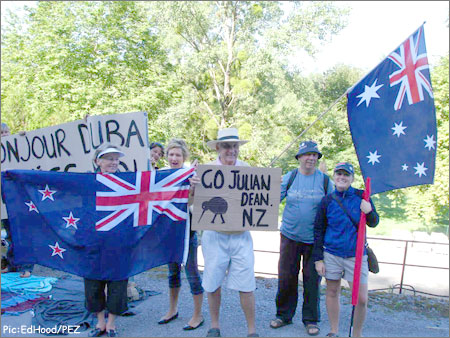 “Sommet 15 k”, the hors categorie Port de Larrau and there’s no messing as our bonnet slants skywards. This is steep from the start but the gradient keeps changing, absolutely no chance of a rythm on this climb; it’s a killer, maybe one of the hardest climbs we’ve seen in this Tour so far. I’ll need to talk to PEZ about audio for the site, those clanging cow bells are cool. 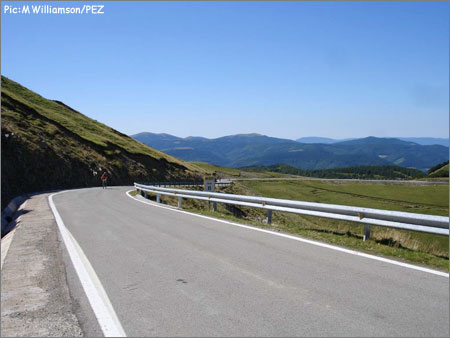 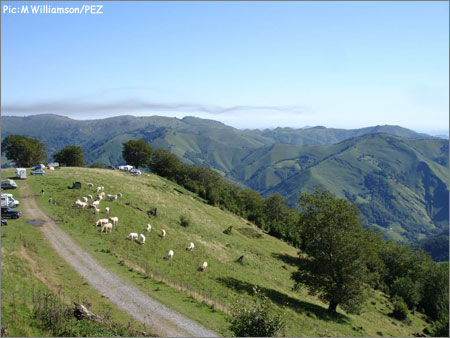 The top, and we’re in Espana, although I wouldn’t say that to a Basque. The descent is well surfaced, barriered for the steep drop-offs and fast, with huge sweeping curves down towards thick pine forests. The tar drops steeply through the pines as a smooth, beautifully surfaced ribbon of black. The descent isn’t too long and we’re still at 890 metres when the road all of sudden kicks-up and we’re on the 3rd cat Alto Laza, it’s well surfaced and the trees catch a lot of the suns rays. It’s not long by Tour standards, at four kliometres, there are just a handful of fans at the top – and no smiles. The descent is technical and awkard to read because of the bright sunshine, and shadows from the trees. Some of the hairpins are adverse cambered and dangerous. The gradient eases and the road begins to chase a stream down the valley.

Hold it! A bar, it’s more of a hut, actually; “dos cafe con leche y una Veterano”. The bearded owner explains that he has no Veterano, but does have Patxaran, the local Basque tipple. Our two coffees and my Patxaran comes to three euros, I want another one, but Martin drags me back to the Renault. It’s a lovely surface as we roll towards what appears to be a cliff face – are we going up there? We sure are, 14 k to top of the first cat Pierre Saint Martin Pass, says the sign. 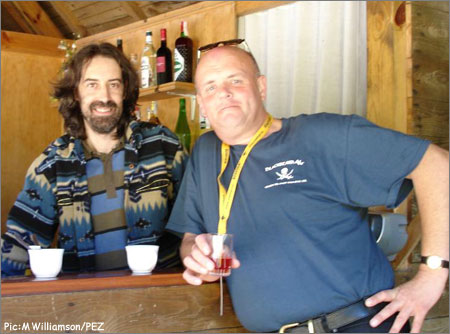 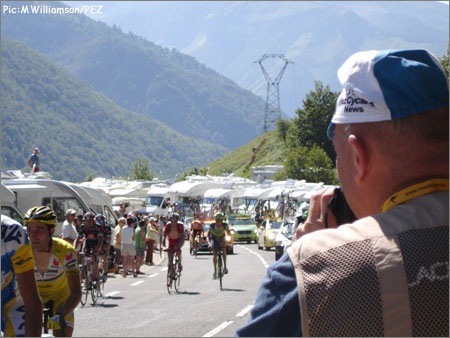 The Euskaltel pavement artists have been out; but who’s left in the squad that can produce the goods? Iban Mayo has ‘defected’ and Roberto Laiseka has called it a day, maybe Miikel Astarloza? Let’s hope so. As we climb into the jagged Basque heartland and the orange hats, jerseys and T-shirts proliferate, you realise that Euskaltel is more than a cycling team, it’s a symbol of Nationhood, national pride brought to life. Up, up the smooth tar climbs, we’re way-past the tree-line now and there’s only alpine meadow and hardy alpine flowers around us. 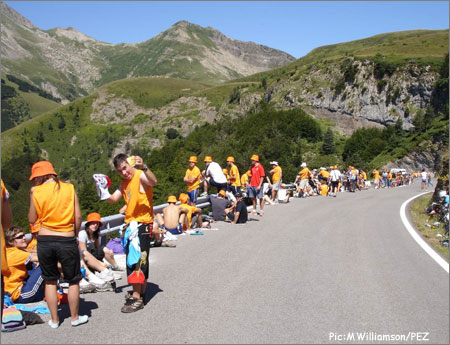 This climb is savage, there is simply no respite and the sun blazes-down from a cloudless sky. It’s breezy too, with the flags standing stiff. The top, and the views are stunning, as we say ‘hello’ to la Belle France again. The descent is well-surfaced wide, open and fast. Back into the tree line now and the bends tighten and drop through cuttings in the rock. Straighter now and fast as we loose height rapidly. Then it’s back to hairpins as we drop, down, down. I’m conscious we haven’t done any interviews for a long ways, but roadside fans have been thin on the ground and those Basques don’t speak much English; besides, they need all their breath to scream for their orange idols. 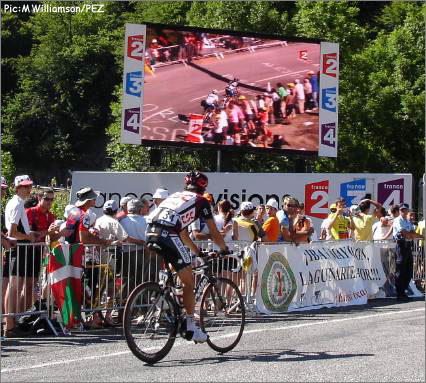 After 25 minutes, straight, of descending, the road begins to level as we hit the valley floor. Arette at 156 K and the second feeding station; it’s on a horrible little snap – just the job, trying to grab a musette on a climb with legs dead from 25 minutes of freewheeling. The fans are still sparse, but that won’t be the case on the Marie Blanque or Aubisque.

Long stretches of gently-dropping valley road are easier for battered muscles but still that sun scorches the tar. Escot, at 171 kilometres and the Marie Blanque starts here; it’s cat one and 9 kilometres to the ‘sommet’. It starts innocuously enough, winding through the trees, the surface isn’t great, but it’s not steep or too narrow. Soon however, it becomes apparent why it’s cat one as the gradient bites and one long, steep ramp follows another. There’s no shortage of fans up here and the higher you go, the steeper it gets. We search in vain for flags where English is spoken, but no dice. We’ve seen a lot of climbs this week, but for us, that was one heavy-duty ascent. 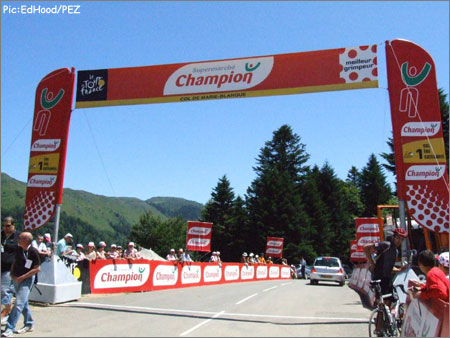 The descent isn’t steep initially but as it nears the valley floor it gets twistier and the Renault’s brakes start to fade as hairpin follows hairpin. The valley floor, at last and the crowds are big; an Irish flag – brakes! All the way from Limerick, with Robbie McEwen’s signature on the shirts. Vino? “But first will you have some wine with us? We’re very disappointed, we saw Vinokourov with his damaged knee and felt sorry for him, but it’s such a bad example for the kids, isn’t it?” It’s a wrench, but we have to go – Pez has four new readers though. 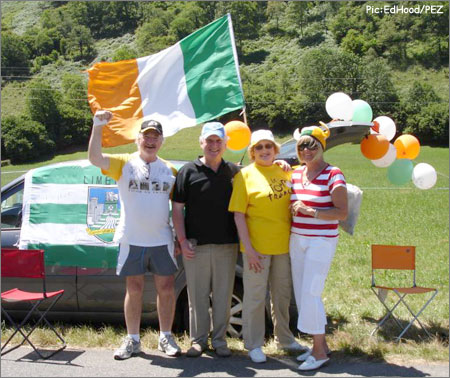 The final climb, the Aubisque is real-close now and there’s ‘chicken’ fans, what’s their take on Astana? “It’s disappointing about Vino, but when we saw him on Monday – he reminded us of Landis last year; just too fast! It’s such a beautiful sport and whatever happens, the Tour must go-on; but it would be good to see the guy with the best legs rather than the best doctor, winning” 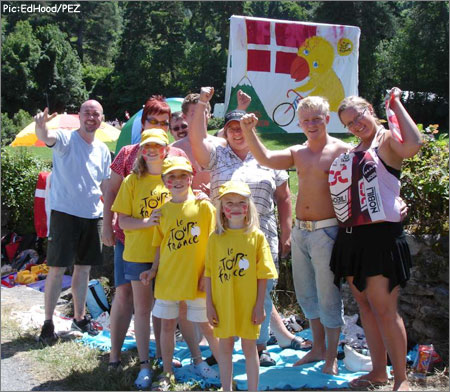 We’ll drink to that one, but it’s onwards and upwards for us.

The Aubisque doesn’t play games, it’s steep from the start but the surface is good and lower down it’s well-shaded by the trees.

“Martin, how many Astana hats or flags have you seen today? None? Me neither, that’s strange.”

Just after 10 K to go you are out of the trees and into the blast furnace. Through the tunnels and back into the trees, the air is cool and there’s no smell of tar. But most of the way, from here up, you’re in the sun. It’s steepn and the higher you go, the gnarlier the surface gets.

At six kilometres to the summit, we can go no further, it’a a shuttle bus to the top. 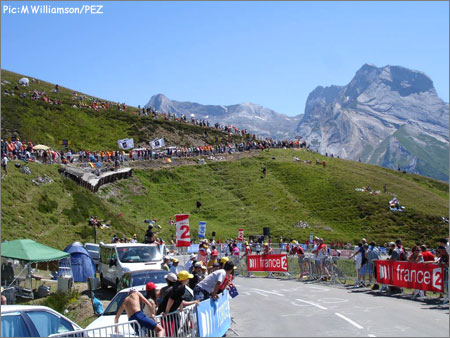 All aboard, and as the road nears the summit it gets narrower and twistier. Beyond the village of Gourette at four kilometres to go, the views are incredible, you are higher than the surrounding peaks, the sky is impossibly blue and the sun is intense. The gradient does not ease and a rider would have to drive all the way to the line – cruel. The top, and what does the Pez crew do? We jump right out of that mini-bus and start to walk – down! There is no traffic allowed against the race flow, so the bus takes you up, but not down, well, not for a long, long time, anyway. But we need to get you the pics that no one else does, so we snapped our way back down that mountain – we hope you like the pics. I had to stop at Gourette and buy socks, the old bare pieds inside the shoes were on fire. 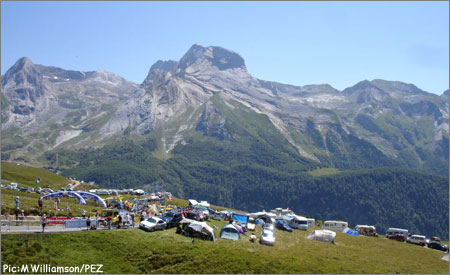 We just about made it back down to the permanence before the riders, but not quite; Rasmussen and Contador were first-up, then Evans and a very determined looking, Leipheimer with Sastre on his own, just behind. 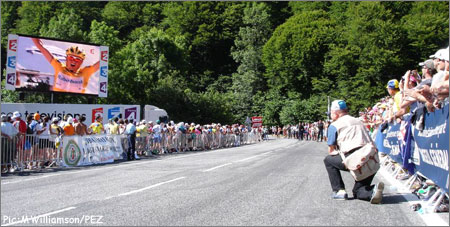 The race report you’ll get else where on Pez, but we hope you like our shots and we can tell you that as we caught Rasmussen winning the stage, on the giant screen outside the permanence, there were as many ‘boos’ as there were cheers. He said it’s because the crowd are taking their frutration at Vino, out on him. (!?)

And, did I lose that dark image, in my mind? Yeah, for sure! I did too much waving to cute kids and talking to great folks to hold-on to any of that stuff.

Carmichael Sez: Racing For A Contract

Tour de PEZ: Riders Give Us The Dope