PEZ Roadside Stage 9 – The Tour’s final day in the Alps is also Bob’s final report on this year’s race. The PEZ Roadside coverage continues later this week, but for now let’s enjoy Bob’s race day on the Galibier.

It’s the Woodstock of cycling… 8,000 feet up in the Alps, The PEZ crew spends the day with the crowd of crazies atop the Col du Galibier.

The mass migration of man and machine began days and days ago. The people came from both sides of the climb, ascending from Valloire on the north, and Briancon on the south, and representing nearly every part of the cycling world. 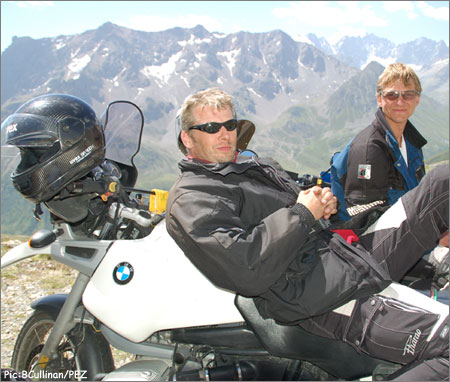 These Germans, who rode their BMWs up here two days ago, camped in tents and fought the elements just for this view… 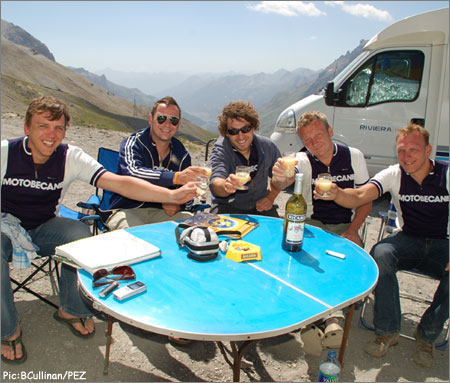 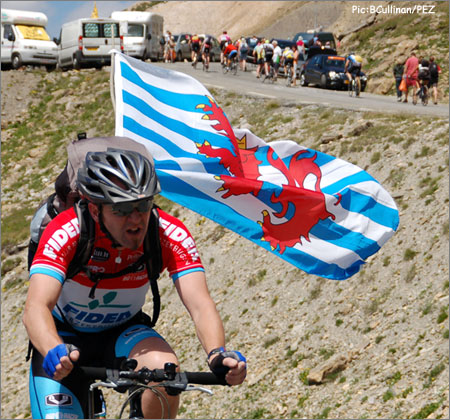 …the guy from Luxembourg who carried his colors all the way up the hill from Briancon, just to cheer-on Frank Schleck… 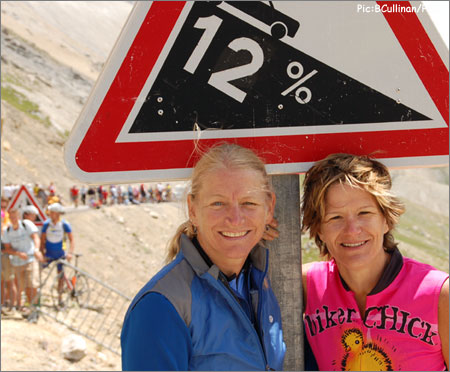 …Jennifer, from Viva Travels in Vail, and Kim, her client from Florida… 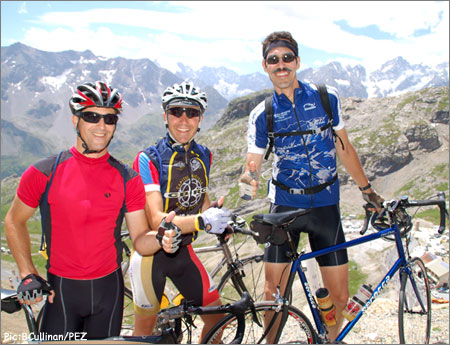 …and three more Americans, givin’ the sign of approval to this amazing sight. 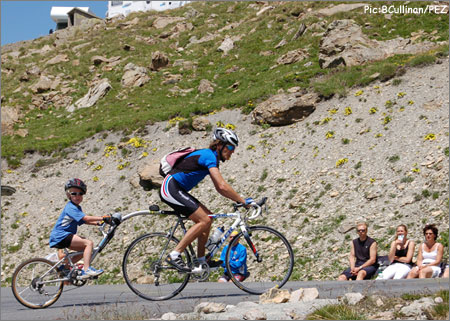 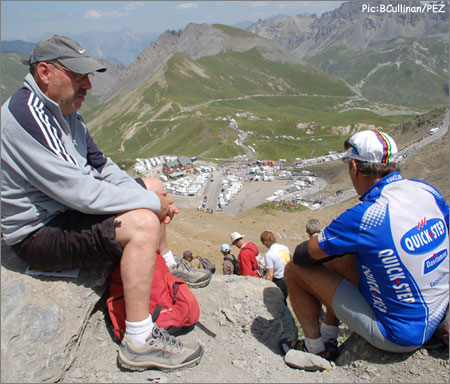 …to the old guys perched on a perfect spot at the top. 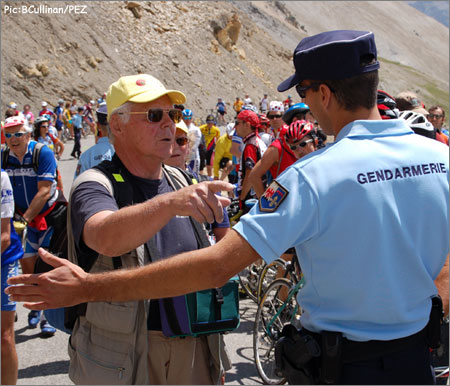 But not all made it to the top. The crowds were so huge at the summit that the Gendarmes had to shut-off all access to the top of the col a full four hours before the first riders rolled through.

So, how crazy was it? 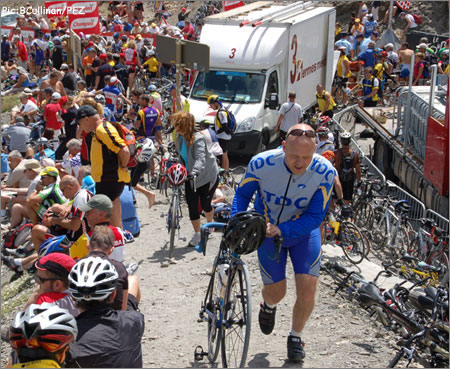 …it was unbelievable. Hundred and hundreds of bikes, and thousands and thousands of people, all scrambling for the idea place to watch the race. 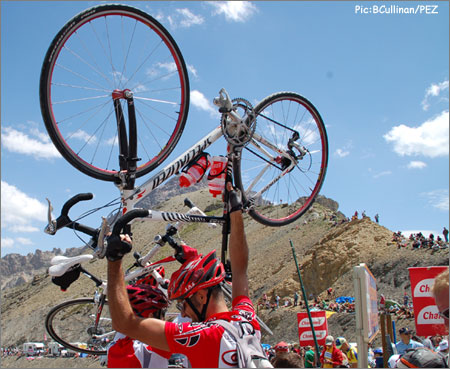 If there wasn’t room to roll the bike, you had no choice but to carry it to your stake-out spot, but if you think this looks like a pain… 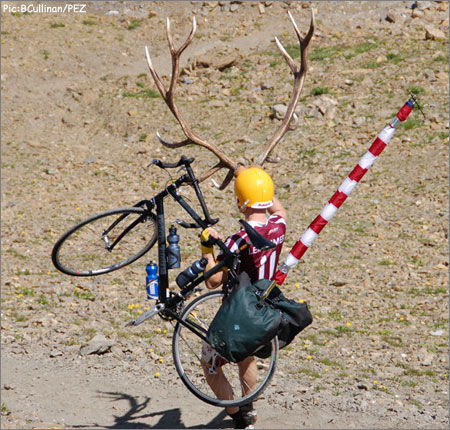 I’ve seen this dude before, at the Tour of California. If some people march to the beat of a different drummer… then this guy has his very own band. Nice horns. 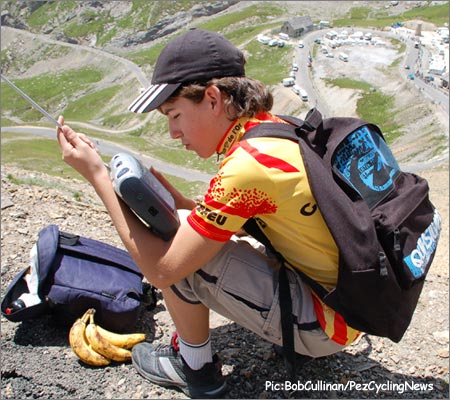 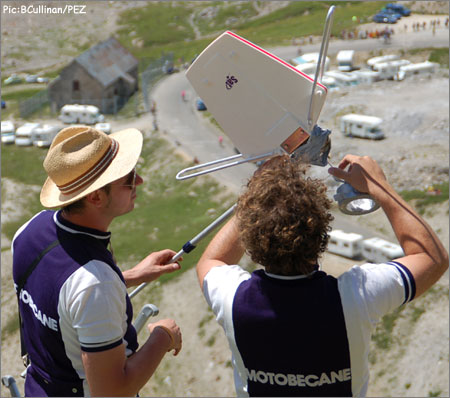 …but the Belgian boys had the best idea. Rig-up the antenna, fire up the 20-inch TV and power it all with a portable generator. 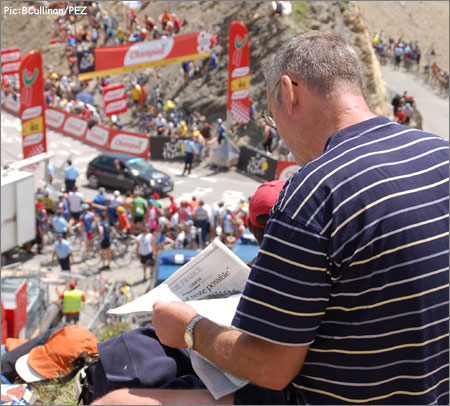 The waiting is as much a part of the Tour as the flags and the fans. It’s often hours and hours from the time the people arrive until the first riders come into sight. So, whaddaya do to pass the time? Well, you can catch up on your reading… 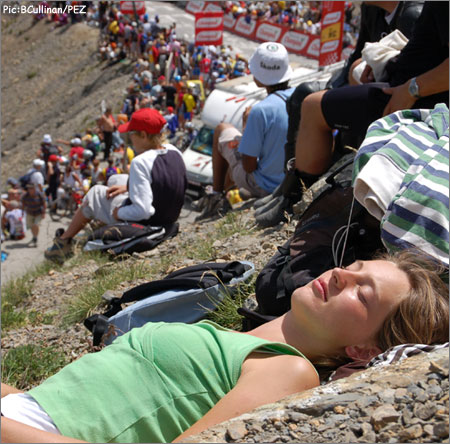 …or maybe just cop a quick nap to try and conquer the inevitable sleep deficit that nearly everyone seems to suffer from during this three-week party. 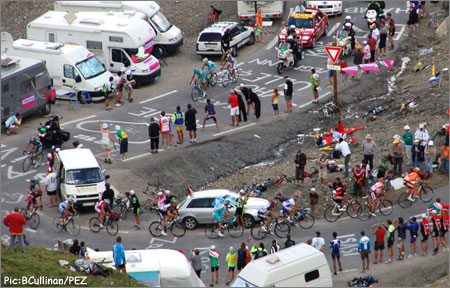 But sleep won’t last long. Before you know it, the helicopters are overhead, and down below, you can see the tiny dots of cyclists as they surge and suffer up the mountain. 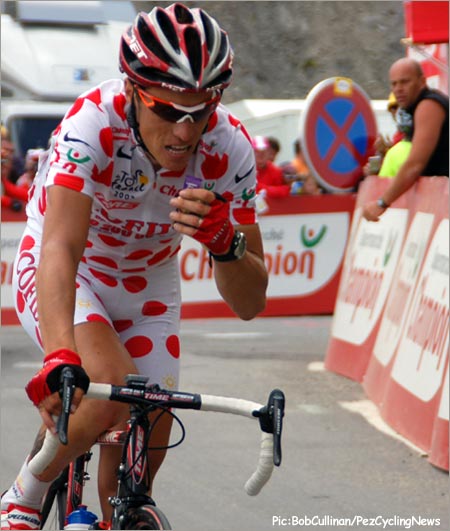 Cofidis climber Sylvain Chavanel was in the polka dot jersey today because GC leader and top climber Michael Rasmussen had the choice of wearing yellow or polka dots. So Chavanel got the honors, but he was off the pace today, bringing the dots jersey up a bit too late to score any more points KOM in front of the French fans. 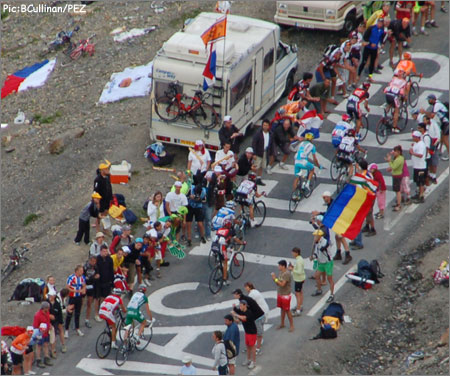 The paint on the road is there to cheer on Thomas Dekker, but it’s an international group of both riders and fans that crowd this part of the course. 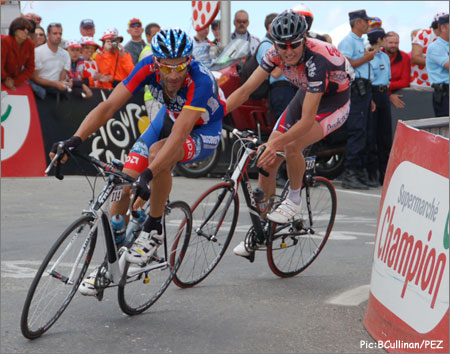 US national road champ George Hincapie had a pretty good day today, but what’s the deal with the new beard? I thought it was only hockey players who didn’t shave during the playoffs. 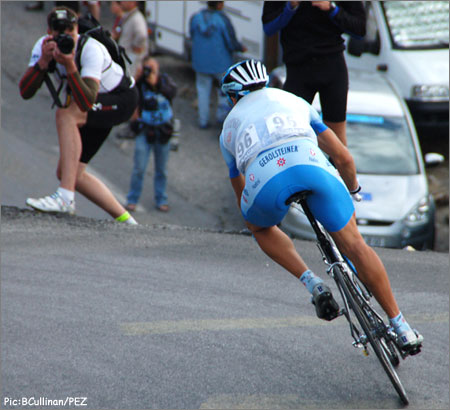 Check out the guy on the left – every fan wants to be in the perfect position, the place where they can get that one primo photo. Nice, eh? 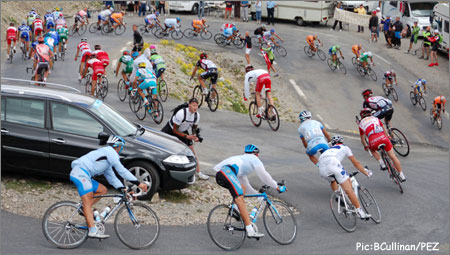 The last big pack of the day snakes their way down the treacherous hairpins on the back side of the Galibier, headed toward the finish line in Briancon… 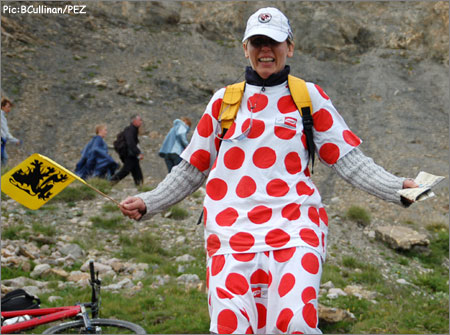 …while the fans make their way down off the mountain, too. It’s all over in a flash of noise and color. You may wait for hours and hours for those few seconds, but it’s all so worth it.

What a day… what a race… what a Tour. It’s been an incredible experience for all.