Champs Elysees that is… – The taxi driver gives us a few words of apology as he assists his female passenger in parting company with large quantities of red wine onto the hallowed cobbles. It’s 6:00 AM on the Champs Elysees, Paris the last stage of the Tour de France is just hours away and PEZ joined the bright young things coming home from parties, the technical crews and the cops, to sneak in a quick lap of the most famous finishing circuit in cycling.

Crews arrive early to set up the course.

The finish line is at the bottom of the Avenue de Champs Elysees, one of the most famous streets in the world. It’s cobbled, small neat sets in ‘fan’ patterns, well laid and with only the odd rogue, rough patch. 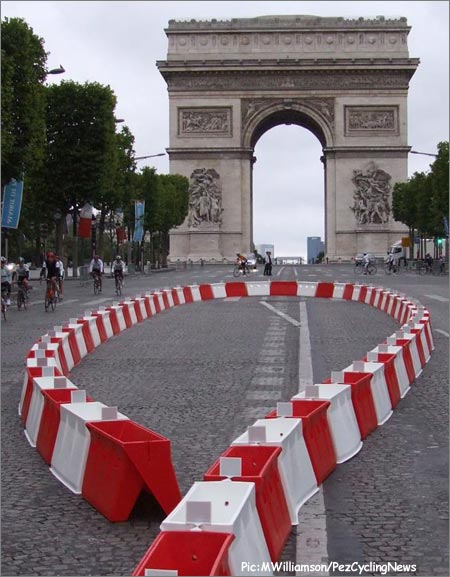 Straight in front of you is the Arc de Triomphe, that special symbol of the French capital, along with the Eiffel Tour, which is over to your left, but on the opposite bank of the River Seine, we’ll see that romantic stretch of water again, later in the lap. 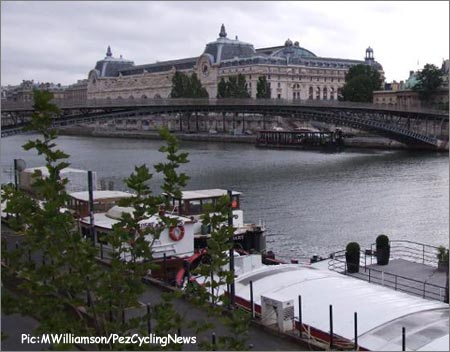 On the left of the finish straight are the corporate hospitality tents, sparkling crystal sits on virginal white linen, ready to get red wine spilled all over it, as the guests get merry.

There are acres of ‘cheap seats’ too, they’ll be at a premium in an hour or two.

These fans were camped out 8 hours before the race was due to arrive.

The Champs Elysees runs all the way up to the Arc de Triomphe, and like Sean Kelly says; “Wot ye doant reealiyz, iz dat it gitz steepur, de furder op ye go!”
I couldn’t have put it better meself, Sean.

Martin and I were on Felt carbons, on loan from those nice guys at Velo Sport Vacations, and cool machines they were too. I checked out the Felt website, if you’re into aero-stuff then visit the interview on the site, with Felt founder, Jim Felt – very interesting.

Aero isn’t a big consideration on the cobble’s though, as you grind up towards the turn, it’s a bit like one of those criteriums they have on sea front promenades, up one side and down the other.

Because of the volume of traffic, the cobbles are not as even here and in some places, tar has poured-over them to try and smooth them over.

The Champs Elysees is a sought after address and many big companies, like Peugeot and Toyota have flagship showrooms alongside the famous cobbles.
In the Toyota window they were busy polishing concept cars ready for the Champ’s biggest day of the year.

Despite the on again, off again political relations between the US and France, the Champs is home to McDonalds, Nike, Planet Hollywood, Gap, and Disney.

The bike accelerates quickly down the slope with out any pedalling, if Gert Steegmans was on the front, I can’t begin to guess at what the speed would be like.

At the bottom is that Sargasso Sea of cobbles, the Place de la Concorde, you bank right and head diagonally across the Place to pick-up the Quai des Tuileries and the luxury of perfect, smooth tarmac, the Seine is on your right and the Jardin des Tuileries is on your left.

Incidentally, the best seats in the house are on the Place de la Concorde, facing up the Champs Elysees, you see them coming straight towards you and on both trips across the Place, plus you get a great rear-view of the sprint developing. 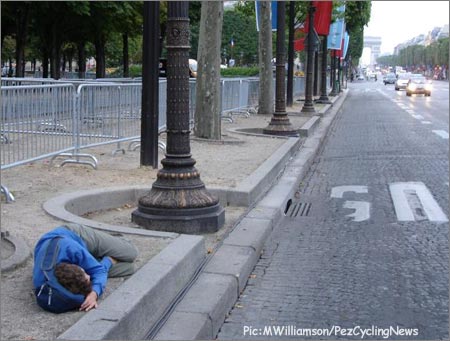 Another dedicated fans stakes his spot.

Scotty would be saying: “She’ll no’ take any more, Jim!” on this riverside stretch.

PEZ-Man Ed Hood – throws all caution to the wind for our cycling-inspection of the Champs Elysees. 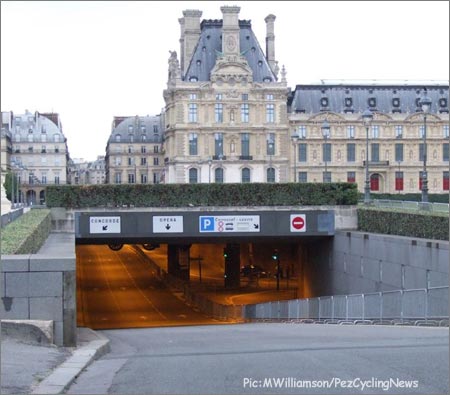 Then it’s 90 left and into the tunnel, it’s like the big-dipper at the fun fare, the tar is smooth and at race speed the momentum takes you up the other side, at ‘Ed speed’ it felt like the Aubisque.

As you burst out into the sunlight, there’s the golden statue of Joan of Arc, I wouldn’t like to have crossed that girl, not with that face on, and that lance in her hand.

It’s 90 left again and onto the cobbles of the Rue de Rivoli; arcaded shops on your right, the Jardin des Tuileries on your left, now; when we were there at just gone 06.00, the boys were just coming home from the party and having big problems opening their mayonnaise sachets.

Ah – clubbing till 6 AM – remember those days? Me neither.

You’re not going to do a ‘Jeff Pierce ‘87’ today and sneak away to win on your own, it’s a block headwind; use your strength to take your sprinter up instead,

At the end there’s that cobbled sea again, crank left and aim at the corner over on your right; hang the right and there’s the finish straight, cobbled, long, flat and fast.

Don’t let the roar of the crowd pump that adrenaline too hard too early, it’s longer that it looks.