Five, four, three, two, one – the big sweep second hand clicks to zero and the unbelievable becomes reality; we gasp, along with the thousands of people packed-into Luxembourg City centre. The man with the yellow jersey-topped-skinsuit as last year’s winner of the Tour de France has committed the ultimate in novice ‘time-testers’ errors and missed his start in the prologue of the 1989 Tour de France.

Your name may be Pedro Delgado and you may have the Vuelta and Tour among your glittering palmares, but rules are rules and just like in the most humble of local time trials, it’s the time that he reports to the time keeper that counts, not the time he’s on the road. It was two minutes and forty seconds after his allotted time that the popular rider from Segovia in the Spanish mountains fumbled and panicked his way out of the start house. 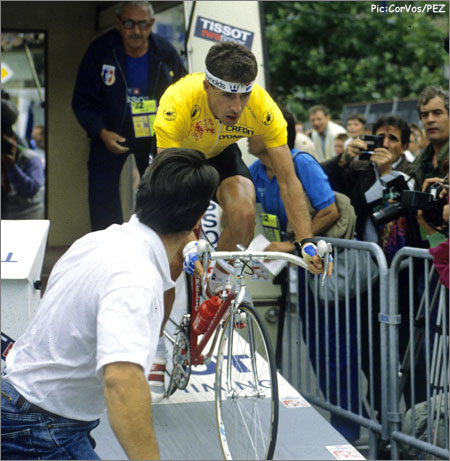 It must not have been with the best feelings that Delgado rolled out of the start-house.

After just 7.8 kilometres of the Tour, Delgado was 2-54 down on the leader; 2-40 for his late start plus a further 14 seconds deficit on the winner on actual time. Surely, we agreed, Pedro had exhausted his bad luck on the first day and would now go about chipping-back the deficit and winning the Tour.

The winner on that sunny day in one of the world’s most affluent cities was that most stylish of Dutchmen, Erik Breukink riding for the Panasonic team. Breukink was class on a bike, smooth and stylish, he could win a short stage race, like the Criterium International or Tour of the Basque country and he could make the podium of a major tour – 3rd in the Giro in 1987; 2nd in 1988 and 3rd in Le Tour in 1990. But he didn’t have that streak of granite in his soul that it takes to win a Grand Tour, in this edition he would collapse as soon as the race reached the mountains.

The big guns filled the placings behind Breukink – Tour-winner in 1983 and ’84, Laurent Fignon of France was second; Irishman and 1988 Vuelta-winner, Sean Kelly was third and in fourth place was 1986 Tour-winner, ‘back from the dead’ after a near-fatal hunting accident and a long winless-spell, Greg Lemond of the USA.

Alert! Alert!
Perhaps Delgado’s disastrous prologue should have alerted us that this was going to be one of the most incident-packed and exciting in the race’s long history.

The Sunday was a split stage, a 135.5 kilometre road race around Luxembourg in the morning, followed by a 46 kilometre team time trial in the afternoon. 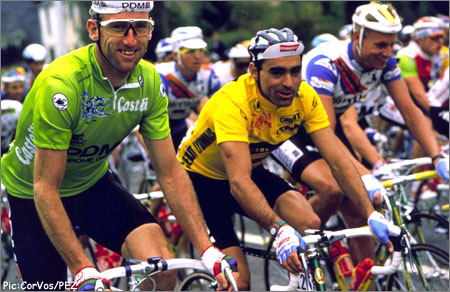 A happy Da Silva rides next to incredible Sean Kelly.

The road race had a fairy tale ending as Luxembourg-domiciled Portuguese Acacio Da Silva dropped his breakaway companions to finish in solitary splendour and take the stage and the yellow jersey.

(We’ll gloss over the stories that he lived in Luxembourg to duck his national service in the army, back in Portugal.)

The team time trial was held on rolling roads and was that ‘test of man and machine’ as beloved by those who like their clichйs.

In the 70s and 80s the team time trial had been the exclusive property of Dutch Manager, Peter Post’s Raleigh and Panasonic squads. Fignon, aided and abetted by his prologue-specialist, strong-man, side-kick Thierry Marie, had challenged this dominance and his Systeme U squad demoted the Panasonic ‘Postmen’ to second place by 32 seconds – a big margin at this level. Incidentally, that Systeme U team had a guy by the name of Bjarne Riis in-there, looking a lot heavier than he did when he won the Tour in 1996 – but let’s not talk about him!

An Aesthetic Discipline? Hardly
As another disgraced DS – Manolo Saiz – once said; ‘it’s a very aesthetic discipline’; he’s right in that there’s little to beat the sight of a slickly drilled team rolling along at speeds approaching one kilometre per minute, the lead-man swinging-off the front of the line, easing back down the line and flicking-onto the tail-end of the line – pain, speed, concentration, skill; beautiful indeed.

In many cases though, it’s a brutal event where the climbers and sprinters are bludgeoned by their square-shouldered, big geared, chrono-specialist team mates. We were spectating on a long drag and the teams whistled past just inches from us, the speed they were climbing at was hard to take-in. It was as if they were in the last metres of some frantic sprint-finish.

Robert Millar’s Pain
Our fellow-Scot, Robert Millar rode for the French ‘Z’ team that year and was stone-last in the pace-line as they hurtled past, glued to that wheel as if his life depended upon it; indeed his survival through to his beloved Pyrenees did depend upon it – Manuel Guijarro (Kelme) and Het Volk-winner, Johan Capiot (TVM) were both dropped, missed the time-cut and were on their way home on only the Tour’s second day.

Millar’s day would come though; I can still remember leaping around my living room as Millar dropped Delgado at the top of Superbagneres to take stage ten, the pedals on my bike turned by themselves that night.

Talking of TVM, Aussie ‘beast’, Phil Anderson was at the head of his squad on the drag and had already blasted four of his team (including the unfortunate Capiot) out of the back, with five to count there was no room for error as Anderson hammered a huge gear at the front to take the survivors to an eventual ninth place just three seconds behind the more cohesive ‘Z’ men who took eighth.

Delgado Bids Adieu To Tour Victory
The big ‘jaw-dropper’ though, was the last place of Delgado’s Reynolds squad (which would eventually morph into the legendary five-Tour-winning Banesto team of Miguel Indurain) despite the presence of noted strong-men against the watch, Julian Gorospe, Melchor Mauri and a young ‘Big Mig’ who had won the early season Paris-Nice.

The cause of this disaster once again centred on their team-leader making an elementary mistake. An embarrassed Jose-Miguel Echavarri, Delgado’s manager, explained; ‘Pedro didn’t eat enough after the morning stage and got hunger-knock!’ Reynolds lost a massive four minutes to Systeme U; it’s safe to assume that without their travails the Reynolds riders would have finished in the top ten that means they would have only conceded around two minutes to the winning French squad.

This meant that Delgado had squandered at least 4-40 after just two days of racing. 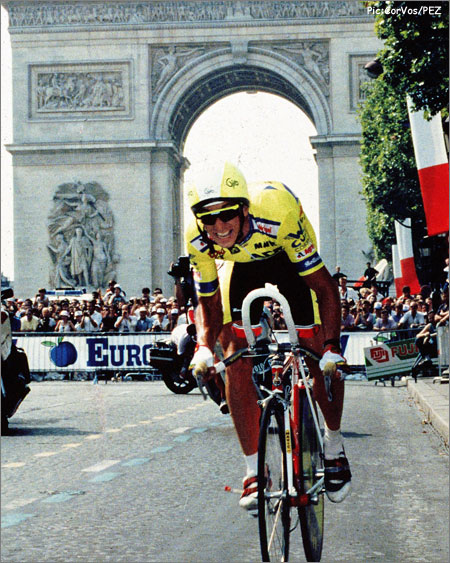 It would be a few more weeks yet before Lemond unleashed his final day fury.

There was plenty to talk about in the car on the long drive home.

You Know The Rest
Three weeks later Lemond grabbed the Tour from Fignon in the last time trial with an overall winning margin of just eight seconds. 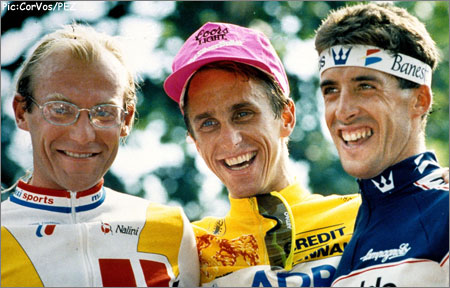 The man that finished in third place had conceded 3-34 to Lemond, his name – Pedro Delgado. 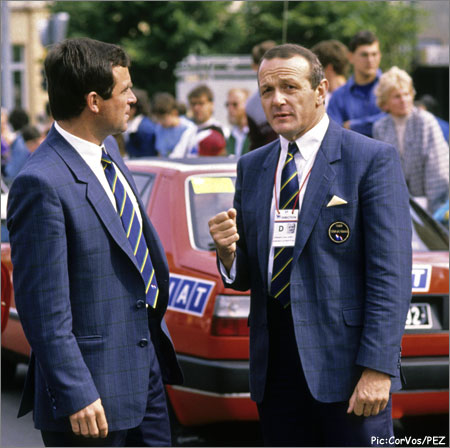 Wait a tick, I know those guys from somewhere…

Tour time is closing in – just a few days until the big show hits the streets of London. We’ll be there front to back and have a few surprises in store for what will be our best Tour coverage ever. So keep it dialed right here!