Carmichael Sez: After More Than 3000 Kms, Le Tour Will Be Decided By Seconds

Stage 19 Analysis: For riders who go to the Tour de France with a legitimate shot at riding into Paris wearing the yellow jersey, there are a handful of key days within the 23 that encompass the entire race. Tomorrow’s TT is the final day to lock up victory – and the Podium is anything but settled.

While it’s critical to be attentive and engaged every day, the mountain stages and the time trials are the days where the eventual winner builds and defends his margin of victory. In 2008, we’ve seen a very evenly-matched group of contenders lay it all on the line, yet no one has been able to open up an unassailable lead. Just like last year, we’re heading into the final individual time trial – just one day before reaching Paris – with the yellow jersey and all three positions on the final podium up for grabs. 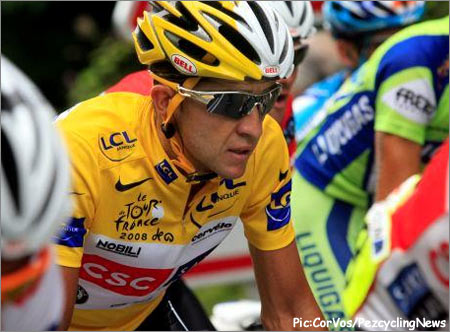 The current leader: Carlos Sastre
The Spanish leader of the CSC-Saxo Bank team is finally in a position to win the Tour de France. He’s finished third and fourth overall before, and finished in the top 10 on five occasions, but pulled on the first yellow jersey of his career after his win at l’Alpe d’Huez on Stage 17 earlier this week. But Sastre is a rider who excels in the mountains and struggles in time trials, and his 1:34 lead over Cadel Evans may not be enough to keep the Australian from taking the yellow jersey off his back the night before the race reaches Paris.

Fortunately, there are a few things working in Sastre’s favor. Stage 20 is not a pancake-flat time trial. Many of the best time trial riders are able to go fastest when they can maintain a very high and steady pace. Rolling hills can disrupt a rider’s rhythm and make it difficult to stay at his highest speed. If Evans struggles with the undulations on the course and Sastre is able to attack those small rises, he may be able to maintain enough of his current lead to hang on the yellow jersey.

The fact we’re at the end of three weeks of racing may also work in Sastre’s favor. Head-to-head and fully rested, Evans would most likely be two seconds faster than Sastre, per kilometer, over 53 kilometers, and that would mean Sastre would lose at least 106 seconds when he can only afford to lose 93. But at the end of the Tour de France, the man who has recovered best since the last mountain stage may have the advantage.

And of course you can’t discount the added motivation a rider gets from wearing the yellow jersey. It’s an unquantifiable advantage, much like home-field advantage, but it’s real and riders have been known to rise to the occasion when they are riding in yellow as the leader of the Tour de France.

The Challenger: Cadel Evans
Cadel Evans came to the Tour de France as the leading contender. He finished second overall to Alberto Contador by just 23 seconds, and must be thinking that he’s experiencing a bit of dйjа vu this year. Going into the final time trial last year, Contador held the yellow jersey and Evans trailed him by 1:50. The scenario was very similar: Evans was a much stronger rider against the clock and it was entirely possible that with a great ride he could take the yellow jersey off Contador’s back. This year Evans’ chances are probably even better than they were last year. He only has a 1:34 deficit to make up against Sastre, and historically Sastre has not been stronger than Contador in long time trials. 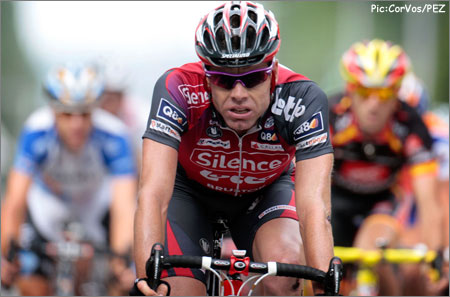 Evans doesn’t necessarily have to have the ride of his life tomorrow in order to win the Tour de France, but he cannot afford to make any mistakes, either. The course is challenging and the difference between winning and losing the entire Tour de France may come down to just a handful of seconds. It’s going to come down to details: taking clean and fast lines through turns to minimize the loss of speed, taking risks by staying off the brakes as much as possible, and even keeping his head low as this is an important component of maintaining optimal aerodynamics. And even though the course is 53 kilometers, Evans needs to find the shortest distance from the start to the finish. This means moving across the road as the road twists and turns in order to save a few meters here and few meters there. At 48kmh (30mph), you travel 13.3 meters per second. So, if two riders are going the same speed but one can shave 133 meters off the total distance by taking better lines though corners and bends, he’ll finish ten seconds faster. Evans will already be riding faster than Sastre, but may need these extra seconds as well in order to take the yellow jersey. 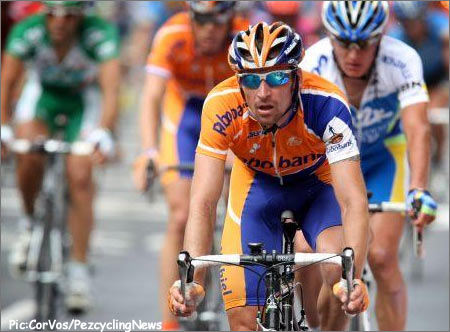 Watch for Menchov to ride himself onto the podium.

The other four men currently in the top six overall are fighting for positions on the final podium in Paris. Among them, Frank Schleck and Bernhard Kohl are unfortunately not great time trial riders and will likely fall from their second and third place positions to at best fourth and fifth, but probably even lower than that. Kohl will win the King of the Mountains competition, however, and finish in the top ten overall, which is a great result for him. And Schleck will probably win the Tour de France in the coming years, but not this year. Denis Menchov stands the best chance of moving up into third place overall. He is a strong time trial rider, and though he may not be able to overtake either Evans of Sastre, he may very well be able to hold off Christian Vande Velde. For his part, Vande Velde will probably move up into the top five overall, which is an outstanding result for him and for the Garmin-Chipotle team. A spot on the final podium is theoretically possible for Vande Velde, but I think he’d need the ride of his life and for at least one of Sastre, Evans, or Menchov to have an absolutely disastrous ride.

After more than 3000 kilometers of racing, the 2008 Tour de France may be decided by a handful of seconds, so whether you’ve been watching every minute of coverage on the Versus network or you’re just getting interested in the Tour de France right now, find a TV tomorrow morning (starting at 6:00am Eastern) and watch Stage 20.