Stage 10 Analysis: The CSC-Saxo Bank team came to the Tour de France with one mission: to win the yellow jersey, and they brought a balanced team that contains some of the strongest and toughest riders in the world to do it. A few days ago they showed they have the power to rip the peloton to pieces on flat roads, and today they detonated the front group on the Col du Tourmalet. It’s impressive that they have two men in the top six overall, but it’s how they rode on the way to Hautacam that should concern their rivals.

Team director Bjarne Riis is a smart tactician, and putting world time trial champion Fabian Cancellara up the road in a breakaway was very wise. There’s no doubt Cancellara would have been dropped by the leading group on the Tourmalet, but his power would be of great use in the valley between the Tourmalet and the Hautacam if he could reach the Tourmalet summit ahead of the group containing the favorites. 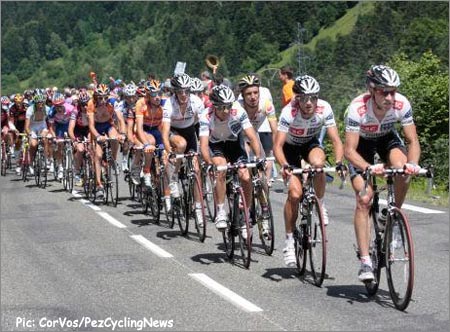 With Jens Voigt and the rest of Team CSC-Saxo Bank setting a hard tempo all the way up the Tourmalet, the peloton shrunk rapidly. The German is one of the most respected riders in the peloton and there seems to be no limit to the amount of suffering he can endure. To put his effort in perspective, he was probably the biggest and heaviest rider in the group he was leading, and he rode with enough power to dispatch Damiano Cunego and Alejandro Valverde, normally two of the best climbers in the pack.

Over the top of the Tourmalet, the group containing the yellow jersey favorites did indeed catch up to Cancellara. The Swiss locomotive drove the pace through the valley and onto the lower slopes of the Hautacam. This was crucial to the team’s strategy because it prevented a large regrouping.

When you reach the top of a major climb with a front group that only contains climbers, there’s enough horsepower in the chasing groups for riders to catch back up on the descent and flat valley roads. This means teammates return to the sides of their leaders, bringing with them food, bottles, and the security of having a supporting rider for setting the pace or providing a quick wheel change if necessary. Voigt and Cancellara drove the pace on the way to Hautacam and essentially retained the tactical advantage CSC-Saxo Bank had established on the Tourmalet.

Once on the Hautacam, it was up to Carlos Sastre and Frank Schleck to finish what their teammates started. Schleck did his best to win the second major summit finish of his career (he also won atop Alp d’Huez in 2006), but had to contend with a pair of Saunier Duval-Scott climbers. Outnumbered, Schleck was attacked again and again, until he was finally dropped by Leonardo Piepoli and Juan Jose Cobo. His efforts, however, moved him up into second place overall, and with Sastre finishing behind him and now sitting sixth overall, CSC-Saxo Bank has two cards to play in the race for the yellow jersey.

One question some people will ask is whether CSC did all their hard work on the wrong mountain. They set a blistering pace on the Tourmalet, but would it have been better to have the whole team at the front on Hautacam instead? Possibly, but if CSC had waited, the group containing the favorites would have been much larger through the valley and at the base of the final climb. That would have made the race a lot more difficult to control. Waiting also means you could be forced to respond to the tactics of another team instead of being able to dictate the race according to your own plan.

CSC-Saxo Bank wanted Stage 10 to unfold their way, and sometimes that means you have to commit the resources to take control early. And though they captured neither the stage win nor the yellow jersey, they may have laid the foundations for a strong assault on the top of the leader board in the mountain stages to come.