Stage 20 Analysis: What do you do when your primary rival is about equal to your strength in the mountains and superior in the time trials? You wear him down with relentless pressure and wait until fatigue strips away all of his advantages.

Then you go in for the kill. For Carlos Sastre the kill came on l’Alpe d’Huez on Stage 17, and today’s time trial performance from Cadel Evans showed that the Australian wasn’t able to recover from that beating, or the others he’s taken over the past three weeks.

Cycling is not the only sport where competitors use fatigue to wear down their opponents. The two-minute drill in football is partly based on the same concept. You keep the pace on the field extremely high, not only because there’s not much time left in the game, but because that high pace exhausts the defensive players and reduces their effectiveness. In combat sports like boxing and mixed martial arts, an athlete with greater conditioning can keep the tempo of the fight high in order to gain the upper hand against an opponent who otherwise would be more powerful. Fatigue is the great leveler, and in many cases can turn an underdog into a champion. 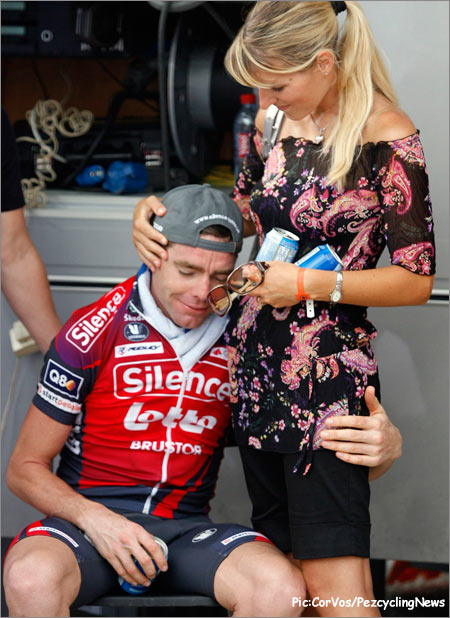 Cadel Evans started the Tour de France as the leading favorite to win. He had the pedigree, having steadily progressed from eighth to fourth to second over the past three years at the Tour de France. He had the climbing prowess, being nearly impossible to drop in the big mountains even if he lacked the explosive power to attack effectively. And of course he had the advantage in the time trials, especially over the other potential yellow jersey contenders.

Carlos Sastre came to the Tour de France with a similar pedigree, greater prowess in the mountains, and a distinct disadvantage in the time trials, but he came with a tremendous team and the best conditioning of his career. And that’s what made all the difference.

Team CSC-Saxo Bank systematically dismantled Evans and his Silence-Lotto team. While that in itself was impressive to watch, it’s important to remember that they could only ride that hard because their team leader was in such good condition. Sastre had the fitness to maintain the infernal pace they set without digging too deeply into his energy reserves. With less fitness, Sastre would have been just as destroyed by his CSC-Saxo Bank teams efforts, or would have had to hold them back a bit, which then would have let Evans have an easier ride and perhaps conserve more energy. 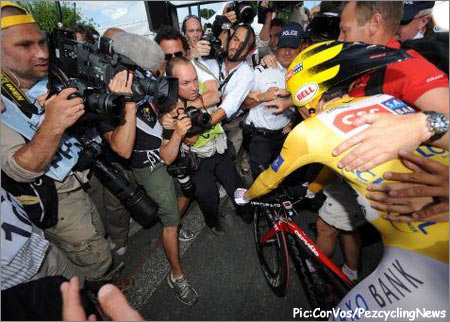 You have to have a lot of patience to play the fatigue card in a bike race, especially a three-week Grand Tour. To his credit, it took two and half weeks before Evans began to show real signs of cracking. And even after conceding 2:15 to Sastre on l’Alpe d’Huez and falling to 1:34 behind the Spaniard in the overall classification, it seemed perfectly reasonable that with two transitional stages before the today’s final individual time trial, Evans would have the time to recover and take the jersey back with a dominating ride.

The fact Evans only had the legs to pull back 29 seconds from Carlos Sastre today indicates he never recovered from the Alps. Many riders said that Stage 19 yesterday was one of the hardest of the entire Tour de France, and I’m sure that didn’t help matters any for the Australian. Like all Grand Tour contenders, Evans is able to adapt to the stress of the first two weeks of the Tour de France and generally gets stronger in the third week. This year, the relentless pace seems to have been too much, and instead of adapting and gaining strength, the fatigue got the upper hand. And once that happens, there’s not much you can do to get back to performing at your best.

For Carlos Sastre, this has been the perfect Tour de France. The route suited his strengths (lots of mountains) and minimized his disadvantages (no prologue, no long first-week time trial). His team was the strongest in the race and dictated the strategy on all the key days. And he had the fitness to conserve energy even while his teammates rode everyone else into the ground. He only attacked once, but against rivals that had been fatigued by the work of his teammates, it was the only attack he needed to make.