Stage Analysis: Stage 14 was an example of experience and patience winning out over brute force, with Oscar Freire showing why he’s a deserving wearer of the green jersey.

Today’s sprint finish started very far out from the finish line, too far for the men who started it to maintain their speed and cross the finish line first. On the right side of the road, Erik Zabel was on the wheel of his teammate, with Freire nicely tucked into third position, when an Agritubel rider (perhaps Geoffroy Lequatre) launched a hard acceleration on the left side. Immediately the charge was on and it appeared that the riders on the right side would be caught out.

But starting from nearly 600 meters out from the line, and after a long a predominantly uphill stage in tremendous heat, no one in the peloton had the power for a successful 600-meter sprint. The men who surged on the right rapidly faded while Zabel’s Milram teammate patiently continued his lead out. When Zabel and Freire finally launched their sprints, they were only 300-400 meters from the line, but they have the power left to accelerate, catch, and then pass the men who had been too eager to wait. 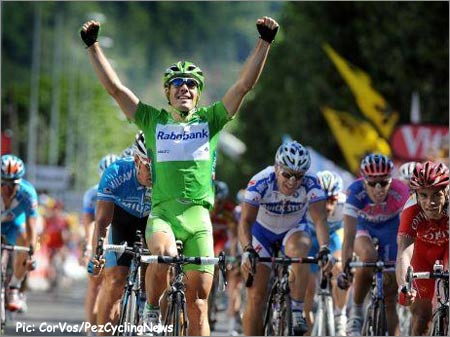 Patience is critical for winning a sprint, but it’s very difficult to be patient when you’re amped up and there’s a Tour de France finish line in sight. There are three distinct components of a sprint, but each is short-lived, so you have to have excellent timing to go along with your power.

The Jump
The jump is the initial launch of a sprint. It’s a violent acceleration that can take a rider from 50 kilometers an hour up to 60+, and it’s also the best opportunity to establish a gap between you and your rivals. This is where you try to use the element of surprise to jump when the other sprinters are either not ready to go or are in positions that make it difficult for them to respond. For instance, if you see your biggest challenger boxed in or caught in traffic, it’s a good time to jump because he’ll have to find a way through other riders before he can respond. A strong jump can put you several bike lengths ahead of your nearest rival, but it only lasts a few seconds.

The Acceleration
Once you jump, you have to keep accelerating. Because of the extreme power demands of accelerating into the wind at 60+kmh, this stage of a sprint is also short lived. Even the best sprinters can only accelerate for 5-10 seconds before they reach their maximum speed. Many sprinters try to time their final surge for the finish line so they cross the line just as they reach their maximum speed. If you go too early, you’ll start to fade and someone who started later will have a good chance to overtake you.

The Run
The final component of a sprint is the period when you’re trying to maintain your maximum speed. This is where you really start to see differences between sprinters. Mark Cavendish has both a tremendous jump and great acceleration, but he’s young and can’t maintain his top speed for very long. As a result, he stays in the wheels as long as possible and launches his sprints in the final 200 meters. In contrast, Mario Cipollini had a good jump and a strong acceleration, but he could maintain his top speed for a very long time compared with other sprinters. This was part of the reason he was at his best when he had a huge and very fast leadout train. Robbie McEwen, Thor Hushovd, Oscar Freire, and Erik Zabel are somewhere in the middle of these two extremes. They have the jump necessary to win in short sprints and the top speed to hold off challengers in medium-length sprints, but no one had the power to win from 600 meters out when the sprint began today.

A big part of the reason Oscar Freire has been a world champion three times and now won four stages of the Tour de France is that he knows exactly what he’s capable of in an important sprint. He knew he couldn’t launch his sprint when there was a surge from the left side of the road today because it was simply too far out from the finish line. So he waited patiently and positioned himself so he could jump another 200-250 meters down the road. As the earlybirds faded, he reached his top speed and powered through to the win.