Stage 7 Analysis: The Caisse d’Epargne team came to the 2008 Tour de France to win a yellow jersey for Alejandro Valverde, and thus far they’re executing the kind of tactics that may very well get the job done. Today, not only did the team have the presence of mind to have at least two teammates alongside Valverde in the lead group of the shattered peloton, but they put Luis Leon Sanchez up the road in the second half of the stage. Like George Hincapie did in Stage 15 of the 2005 Tour de France, Sanchez played his cards exactly right and ended up with a brilliant stage win. Here’s how he did it.

For teams aiming to win the yellow jersey, the tactic of putting a man in a breakaway on a stage that includes big climbs close to the finish is to provide support for the team leader in the event he either attacks on that final climb or becomes isolated by the aggressive tactics of other teams. Since the team leader is in the group behind the breakaway, there is no reason for the rider in the breakaway to work. He basically gets to sit on the back of the group and conserve energy in the draft. That way, when it’s time to go to work in support of the team leader, he has the energy to get the job done. In many cases, even though he’s been in the break, this rider may have more energy to burn than the teammates who have been alongside the leader at the front of the peloton. 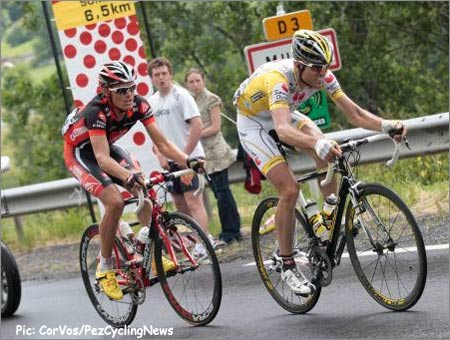 Sanchez had no need to work in the break, with Valverde so high on gc.

There are two ways this tactic can benefit the team leader:

1. If Valverde had attacked and bridged up to the breakaway, Sanchez would have been able to accelerate and set a fast pace for his team leader in order to maximize his chances of staying away from chasing rivals.
2. If attacks from rival teams isolated Valverde or put him off the back of the leading group, Sanchez would have been able to slow down and wait for him, and then attempt to pace him back to the leaders.

George Hincapie has successfully played this game twice. In 2007 he was in a three-man group ahead of Discovery Channel teammate Alberto Contador on the climb up the Peyresourde. Contador repeatedly attacked Michael Rasmussen on the climb but the duo was pretty much together as they reached the summit. That’s where they caught Hincapie, who picked up his teammate and powered down the descent in pursuit of Alexander Vinokourov. Though Vinokourov won the stage (he was later stripped of this victory due to doping), Hincapie’s efforts helped Contador finish with a significant time gap to Cadel Evans, who was chasing behind the Hincapie-Rasmussen-Contador group. 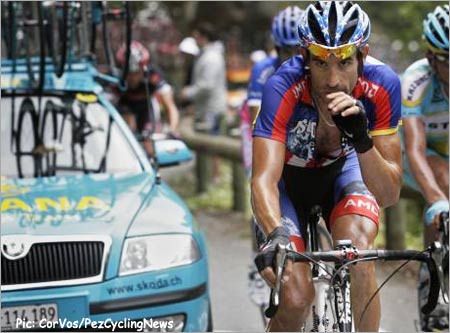 Hincapie has placed in the break on stage 15 in 2007, and later helped guide Contador to the finish.

In 2005, Hincapie won Stage 15 to Pla d’Adet because he was the teammate who had been sent forward into the day’s breakaway. With Lance Armstrong behind in the peloton, Hincapie didn’t have to work with his breakaway partners and was able to conserve energy over the day’s major climbs. On the final climb to the summit finish, it became clear that Armstrong wasn’t going to need Hincapie to drop back to support him, so he was given free rein to go for the win. Since he hadn’t been pulling on the front of the break, he had the energy necessary to accelerate to his first Tour de France stage win.

Like Hincapie in 2005, Luis Leon Sanchez was given the opportunity to go for the win today and used the fact that he’d been conserving energy on the tail-end of the breakaway to his advantage. He attacked hard on the descent off the day’s final climb and time trialed the final nine kilometers to finish six seconds ahead of the lead group. It was a perfect tactical move for Caisse d’Epargne in support of Valverde, and netted Sanchez the first Tour de France stage win of his career and team’s second in this year’s race.