We’re proud to welcome back Chris Carmichael for his second year of Tour coverage on PEZ. With more Tour de France wins under his belt than any other coach, plus the experience of riding it himself, he’ll offer a truly unique perspective on the race with his daily stage analysis. Chris sets the stage with a look at how this year’s rule changes will affect the racing.

The Tour de France is searching for its soul, and it just might find it in the 2008 edition of the grand race. After back-to-back years marred by doping scandals involving top riders, it seems organizers are doing all they can to distance themselves from recent editions of their own race. As a result, the 2008 Tour de France will travel a more nostalgic course that looks more like Tours from the 1950s and 60s, as if organizers are hoping to avoid modern problems by presenting a retro race. One thing’s for sure, it won’t look like any Tour de France you’ve watched in the past ten years.

What’s different this year?
1. No prologue time trial
Every year since 1967, the Tour de France has started with a short individual time trial or prologue. This year the first day of the Tour will be a full-on road race, complete with a tricky uphill sprint finish. It’ll be more exciting than the prologue, but it won’t give anyone – even the riders – any indication of how fit the major overall favorites are. 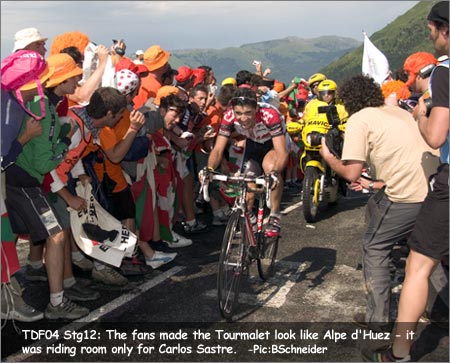 No time bonuses means you can’t just neat the next guy by a wheel to gain a bunch of seconds – this year’s Tour wil be raced in ‘real’ time.

2. No time bonuses for stage winners
The Tour de France is all about time. For years, 20, 12, or 8 seconds were deducted from your overall time if you finished first, second, or third on a stage. These time bonuses, coupled with the results of the prologue, had a tremendous impact on which riders were in contention to wear the yellow jersey in the first week. Later on, time bonuses awarded at the end of major mountain stages sometimes played major roles in determining the overall Tour champion. Remember 2003? Lance Armstrong won the stage to Luz Ardiden and Jan Ullrich finished third, 40 seconds back. But because of the 20-second time bonus for the win and Ullrich’s 8-second bonus for third, Amstrong’s overall lead jumped from just 15 seconds at the beginning of the stage to 1:07.

For 2008, organizers decided to forego time bonuses for stage wins. This may help make the first few days of racing even more aggressive than normal, because it won’t just be the great time trialists and sprinters who have a realistic chance of grabbing the yellow jersey. Later in the race, the lack of time bonuses on mountain stages will mean that the yellow jersey favorites will have to fight for every inch of road. No more winning the stage by half a bike length but moving ahead in the overall results by a full 8 seconds. 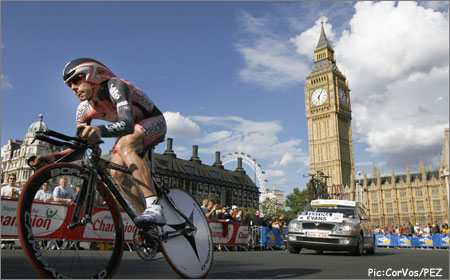 Without a long TT to use to his advantage, Cadel will have to rely on smart riding, and his legs, if he’s to prove the bookmakers right.

3. Short individual time trial in the first week
The modern Tour de France playbook goes something like this: predominantly flat and fast stages in the first week to give the sprinters plenty of time to show off, a long individual time trial and/or team time trial, followed by 2-3 days in either the Alps or Pyrenees Mountains (depending on if the Tour is moving clockwise or counterclockwise around France), a few transitional stages to get from one mountain range to the other, 2-3 stages in the second mountain range, a few more hilly/transitional stages, a long final time trial, and finally the procession into Paris.

Not only is there no prologue, but the first two road stages aren’t tailor-made for the sprinters and there’s a 29.5-kilometer time trial on Stage 4. This individual race against the clock is significantly earlier than normal (it’s typically been held on Stage 8-9) and it’s nearly half the normal distance (in recent years, the first-week time trial has been in the 47- to 55-km range).

A shorter time trial should be good news for yellow jersey contenders who normally struggle against the clock. Riders like Carlos Sastre and Alejandro Valverde are great climbers who excel in the mountains, but like many climbers they struggle to generate the huge wattage necessary to power through the wind during an individual time trial on flat ground. Favorites like Cadel Evans and Denis Menchov rely on time trials to distance themselves from the climbers, but 29.5 kilometers is too short for them to open up big time gaps over their rivals. The Stage 4 time trial will help define the group of riders who are in contention to win the yellow jersey, but it won’t have nearly as much impact as first-week time trials have had in previous years. 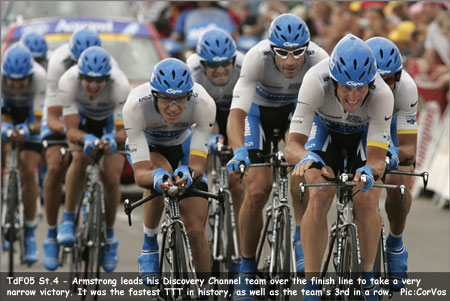 4. No Team Time Trial
I love the team time trial, especially because it’s been more than 15 years since I last had to ride one. It’s an event that obviously favors strong teams, but can be disastrous for teams that lack time trialing horsepower. Squads built to support a mountain specialist, for instance, typically have lightweight riders who climb like mountain goats but are weak in time trials.

In cycling you can go faster as a team than any one rider can go on his own, and you’ll go even faster if several of the guys on the team are bigger, heavier, and more powerful… like locomotives. Teams that excelled in the team time trial (like the US Postal and Discovery Channel teams, CSC, and T-Mobile) often finished at least three minutes faster than teams built around climbers (Euskaltel-Euskadi, Saunier-Duval, Caisse d’Epargne). Eliminating the team time trial removes one of the most beautiful of all cycling events to watch, but it will help keep the time gaps between yellow jersey contenders smaller before the race enters the mountains.

What does all this mean?
It’s time to throw out all the old formulas about how to win the Tour de France. Though the Tour de France is never completely predictable, the changes made by the Tour organizers this year are an attempt to increase the number of riders who have a legitimate chance to ride into Paris in the yellow jersey. In effect, the changes discussed above have limited the competitive advantages for some teams and lowered the barriers to success for others. By leveling the playing field, the race should be more exciting, more aggressive, and less predictable… at least on paper.

The problem is that the Tour de France is not contested on paper or in a laboratory. The organizers can make whatever changes they want to the course, the stages, or the rules; as long as it’s still a three-week stage race that travels through the Alps and Pyrenees, the Tour de France will be won by the strongest and wisest man in the race. Who will that be? Most likely Cadel Evans, but if there was ever a year that Alejandro Valverde could win the Tour de France, this would be it.