Stage Analysis: It’s been a long road to the Tour de France for Danny Pate, but with today’s stellar performance in Stage 15 the world is finally getting to see what this quiet man from Colorado Springs is capable of.

As exciting as it was to watch the action in the yellow jersey group, I was most impressed by Danny Pate’s performance today in the breakaway. He looked to be struggling a bit on the Col Agnel, but rode well and recovered on the long flat run to the day’s final climb. Once there I expected him to rapidly lose ground to Simon Gerrans and Egoi Martinez, both of whom have greater reputations as climbers, but Pate hung on. Actually he did better than hang on, he responded to every acceleration from Martinez and even tried to get away on his own a few times before finishing third on the stage. For a rider known more for his strength in time trials on flat roads, the kid from Colorado Springs showed he has the engine to ride with the best in any race in the world. 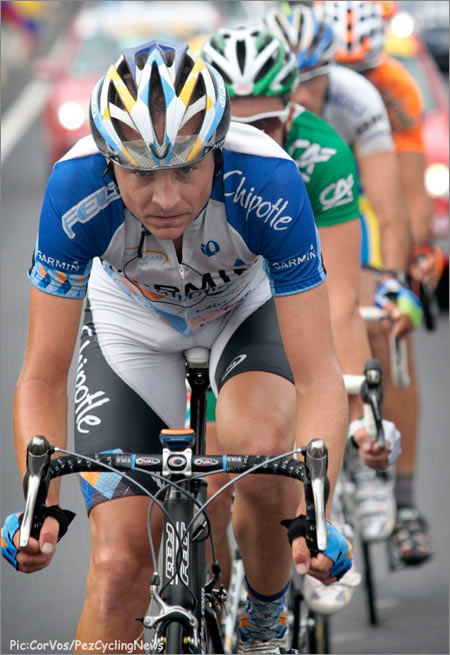 People involved in American cycling have known about Danny Pate’s incredible talent for many years. He was an outstanding rider as a junior and continued to excel when he reached the Under-23 ranks. He won the U23 Time Trial World Championship in 2001 and spent part of a season in Europe. But the environment on an Italian team wasn’t a good fit for him, and at the time perhaps Europe itself wasn’t a good fit. Some say he became disillusioned with the European pro peloton after witnessing doping or being pressured to dope.

He returned to the States and raced for a few smaller domestic pro teams, including Prime Alliance, Healthnet, and Jelly Belly before joining the TIAA-CREF development team that Jonathan Vaughters founded after his retirement from professional racing. With Vaughters, Danny found the supportive environment in which he could flourish, and his enthusiasm for the sport and his results both started to turn around. Over the years he’s narrowly missed winning several big races, including the USPRO National Road Race Championship on three occasions. But even without the big wins, it was notable that he was always present at the front at the end of big races against the guys who were competing on ProTour teams in Europe.

In some ways it was almost fitting that Danny was always a high finisher at big domestic pro races, but not the man on the top step of the podium. The limelight is not something he craves or even wants. That’s not to say he’s not competitive or that he doesn’t want to win. On the bike he’s a tough rider with a giant aerobic engine who thrives as races get more difficult, but he leaves that part of his personality on the bike. Off of it, he’s much quieter and easily slips into anonymity.

I for one am happy to see Pate thriving in the environment Vaughters has created at Garmin-Chipotle. There was a period when it seemed Pate would not find his way back to the top of the sport, and for a while he wasn’t interested in going back to Europe even if offered the chance. Soon after the then-Slipstream-Chipotle team was selected for the Tour de France, Vaughters was asked about which riders he was planning on taking. He commented that he would take Danny Pate “kicking and screaming if I have to”, because he believed so strongly in Pate’s potential and his convictions. Well, I don’t know if kicking and screaming were involved, but I’m sure glad Danny Pate is racing the 2008 Tour de France. There’s no doubt he’s a Tour-caliber rider and it’s great to see him applying his strength and talent in the world’s biggest race.