Stage 8 Analysis: After a full day of riding in the rain, and with two corners inside the final 1200 meters, everyone in the peloton was hoping no one ended up on the ground. Fortunately, the riders beat the odds and everyone stayed upright in order to set up a great sprint finish won by Team Columbia’s Mark Cavendish (and did you catch that final acceleration! Man is he fast right now – ). It’s a testament to the riders’ highly-developed handling skills that no one crashed in a finale that had the potential to turn into a giant mess.

Rain complicates matters at the Tour de France, and can make the final kilometers of a stage even more treacherous than usual. The roads within towns are always a little slicker than the roads in the country; there is more engine oil on them because they are more heavily traveled. When you add rain to the mix, the oil rises to the surface and makes the roads even more slippery. The fact it had been raining, and raining heavily, for some time was beneficial because it washed at least some of the oil off the road. A light rain is the worst because it lays down enough water to make everything slick, but not enough to wash the oil off the road. The first few minutes of any rainstorm are also hazardous. 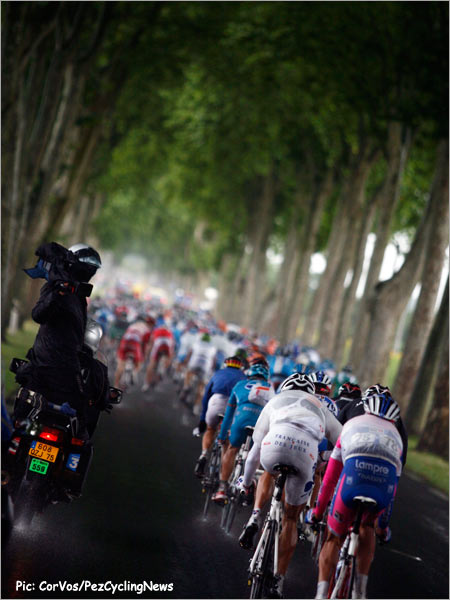 No place in the bunch is safe when the roads turn wet.

Then there is the road paint. The paint used for crosswalks, directional signs, no-parking zones, lane dividers and shoulders is a nightmare when it gets wet. The rain water combines with oil and grime and then stays on top of the paint, forming a layer that’s as slick as ice. Metal grates, sewer lids, and railroad tracks are no better; there are few things slipperier than wet steel.

Since there are no rain delays in bike racing, the riders just have to deal with the conditions and try to minimize the danger. Slowing down is one option, but with a Tour de France stage win at stake, they don’t slow down very much. The guys at the front can try to pick a line that misses as much paint as possible, but that only works for the first handful of riders; if you’re in the big bunch, you don’t have the luxury of picking the perfect line. Often, the best you can do is change the way you use your brakes and distribute weight on the bike.

The more you lean your bike, the greater your chance of sliding out on wet roads. When you’re going into a corner in the rain, it’s better to keep your bike as upright as possible so your center of mass is closer to the line connecting your front and rear wheels. When you lean over, your center of mass is directly under your body, and the contact point with the ground is far away.

Your mass is what’s keeping your tires pressed to the road. When the road is dry, you can maintain traction even when you lean way over. When the roads are wet, however, you have less traction and need more of your bodyweight over the wheels, pressing down on the tire to maintain as much traction as you can get. 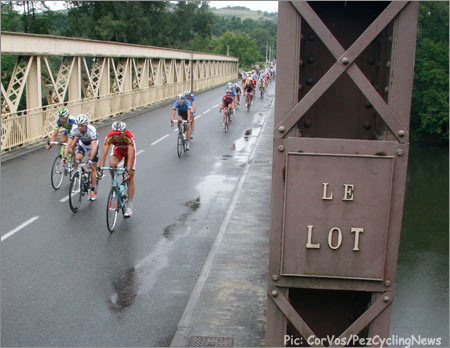 Water, oil, painted lines… treachery is all around.

It’s also important to brake before the corner and release the brakes, if possible, while you’re actually turning. Adjusting your speed prior to initiating the turn is safer because if your tires slip a little, you have a chance to correct and save yourself if your brakes are not engaged. If the brakes are engaged, the wheel locks up as soon as it starts to slide, and it’s even harder to stay upright.

Personally, I think the rule adjustment a few years ago that extended the “safe zone” from the final kilometer to the final three kilometers has led to safer finishes on days like today. Now, if there’s a crash in the main group within the final three kilometers of a flat stage (but not a mountain stage, as we saw when Stefan Schumacher lost the yellow jersey at the end of Stage 5), everyone caught in or behind the crash receives the same finishing time as the stage winner. In the past, that zone only encompassed the final 1000 meters. Everyone knew crashes were likely in wet finales, so they rode like mad to get to the front in hopes of being ahead of the carnage. This only made matters worse because it meant riders were taking greater risks in the middle of the pack. Extending the safe zone has allowed riders in the middle of the pack to relax a little bit, give each other a little more room, and hence make it to the finish line in one piece.