Final Anaylsis: The 2008 Tour de France was the culmination of a long journey for Carlos Sastre, and for many other riders in the peloton it was an important step along their own progressions through the sport of cycling.

The route from a cyclist’s first race to the top of the podium in Paris is long and arduous, but the route is pretty well defined. Riders progress along the route at different rates, and many have to endure setbacks and detours along the way, but the basic pattern for developing a potential Tour de France champion has been the same for many years. Carlos Sastre is the latest man to reach the promised land, and there are more riders taking steps to join him. 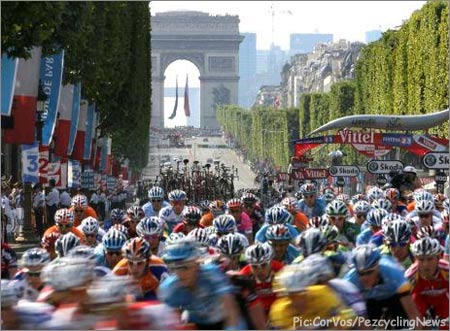 The Beginning
Talent is the first component to being a Tour de France champion, and I don’t just mean genetic advantages like a large lung volume, long femurs, and a high VO2 max. By numbers alone, there are men and women who should be able out-perform the best competitive athletes in the world. The cyclists who rise to the top of the sport have the rare combination of physical gifts, an intense competitive drive, a strong work ethic, and an often-undefinable “talent”. It’s the natural ability to see, in a split second, exactly what needs to be done in order to win, and the unhesitating confidence to go for it. You can teach a good rider how to race, and he’ll win races here and there, but truly talented riders have traits that simply cannot be taught. Identifying talented cyclists is imperative, and then you have to start the process of building the endurance, power, habits, and experience necessary to win the Tour de France

Riding the learning curve
The next step in a rider’s development is to learn how to race and win in Europe. Programs like the U23 National Team house in Izegem, Belgium and the Garmin-Chipotle development team have provided many young American riders with the opportunity to race and learn in Europe. When I started coaching the US National Team in the early 1990s, I immediately took guys like Lance Armstrong, George Hincapie, Bobby Julich, and Fred Rodriguez to Europe because there’s no other way to learn the skills, tactics, and culture of the European peloton. I didn’t expect them to start winning immediately, nor does Noel Dejonckheere or Jonathon Vaughters expect that form the current young riders. They’re there to learn and get better, and soon the best rise to the top and start winning one-day amateur races and placing in the top 20 in three-day amateur stage races.

Progressing through stage races
Young racers aren’t immediately thrown into three-week stage races because they simply don’t have the endurance yet. Fortunately, the amateur and professional racing calendars are full of shorter events that are three to six days long. This is where up-and-coming riders start figuring out whether they are better one-day racers or stage racers. It’s also where they learn important lessons about recovering between the end of one day and the beginning of the next. They start out just riding to survive these races, and then they progress to leading their teams and trying to win them. When he was an amateur, Lance won the pro-am Settimana Bergamasca stage race in Italy, and then he won the Tour de Trump and Tour DuPont as a young professional.

Moving up to the big leagues
After gaining experience in stage races lasting 10-14 days, many riders are ready to ride their first Grand Tour. Finishing a three-week race is a right of passage in the pro peloton, and it changes the way they view racing, suffering, training, and recovery. Riders aren’t expected to win, or even place very well, in their first Grand Tour. There have been exceptions, of course. Greg LeMond, for instance, finished third in his Tour de France debut and Jan Ullrich finished second in his. A more typical progression is to ride as a domestique in a few Grand Tours as you gradually gain endurance and experience.

Two Garmin-Chipotle riders, Danny Pate and Will Frischkorn, experienced a hard initiation to riding Grand Tours. Prior to the start of the Tour de France this year, neither man had even started a Grand Tour, let alone finished one. Yet, both men rose to the occasion and were very impressive in their Tour debuts. Frischkorn was in the day-long breakaway on Stage 3 and finished second. Pate rode in the long winning breakaway on the way to Hautacam and finished third atop one of the hardest climbs in the race. Hopefully this was just the first of several Tour de France participations for both men, and perhaps we’ll be talking about them as stage winners in years to come.

A continuing trend
Regardless of who wins the Tour de France, there are always riders progressing to the level of potential Tour de France champions. Andy Schleck was the Best Young Rider at the Tour of Italy last year and won the same competition at the Tour de France this year. John Lee-Augustyn was the first man to reach the summit of the highest paved road in Europe at just 23 years of age, and Mark Cavendish won four sprint stages of the race as a 23-year-old as well. Of the young riders at the Tour, Andy Schleck probably has the best chance of someday winning the yellow jersey, but in the coming years we may be talking about Roman Kreuzinger, Vincenzo Nibali, or Thomas Lovkist as potential Tour winners as well.

A lot of cyclists pay their entry fee, pin on a number, and enter their first bike race. A small number of them progress through the ranks to become professionals, and an even smaller percentage are successful enough to earn a starting position in a Grand Tour. Winning a stage in a Grand Tour can be the defining moment of a rider’s career and wearing the leader’s jersey puts him in an elite club. The right to wear the yellow jersey into Paris as the winner of the Tour de France, though, is reserved for true champions. Today Carlos Sastre added his name to long list of Tour de France Champions and the men who preceded him will be happy to welcome him to the most elite club in cycling. Congratulations, and enjoy the spoils of victory. You earned them.

—–
I’d like to thank Richard Pestes and everyone at PezCyclingNews.com for the opportunity to contribute to their excellent coverage of the 2008 Tour de France. And thank you to all the readers for your great feedback. I hope you enjoyed the Tour de France this year and will continue to support cycling and this greatest of all races.