TDF Stage 3 Analysis: Stage 3 of the 2008 Tour de France is a perfect example of why gambling is so popular all over the world. On paper, every aspect of the stage suggested that it would come down to a field sprint, but races are not won on paper. Over the course of 208 kilometers, it was a series of decisions and circumstances that shifted the odds in favor of the four daring men out front. Whenever the human element is involved, there’s always a chance for unexpected results.

There’s a long-distance breakaway pretty much every day at the Tour de France, but the course and the conditions for Stage 3 of the 2008 Tour de France meant all the pre-race predictions pointed to the break being wiped out in the closing kilometers to set up a field sprint for the green jersey contenders. Instead, a breakaway of four riders spoiled the day for the sprinters and finished just over two minutes ahead. Here’s why: 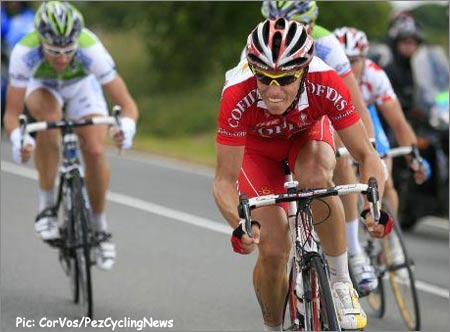 The stage 2 breakaway had some – but not all – of the elements needed to stay way.

1. The break started early
Will Frischkorn from the Garmin-Chipotle team attacked just half a kilometer into the race and was soon joined by three other riders. With more than 200 kilometers still left to race, the peloton was happy to have a group out front because it meant fewer attacks and a far steadier pace for the pack. Starting early also gave the breakaway riders enough time to build a very large lead, which increased at one point to around 15 minutes.

2. The composition of the group was just right
There was no one in the breakaway who can be considered a threat to win the Tour de France, which meant there was no incentive for the teams of the yellow jersey contenders to chase. There wasn’t even anyone in the break who was a threat for any of the other competitions in the race, like the green points jersey, the King of the Mountains jersey (which wouldn’t have mattered anyway since there were no mountain points up for grabs today), or even the Young Rider’s competition.

3. The size of the group was good
Two riders would not have had the horsepower to stay in front of the peloton for the entire stage. Four was a good number because it gives each rider just enough time to recover between pulls on the front. On a stage like today the peloton would probably have been OK letting a group of up to about eight riders get away, but a group any bigger than that would have been shut down because it would have had enough power to finish 15 or 20 minutes ahead of the pack. 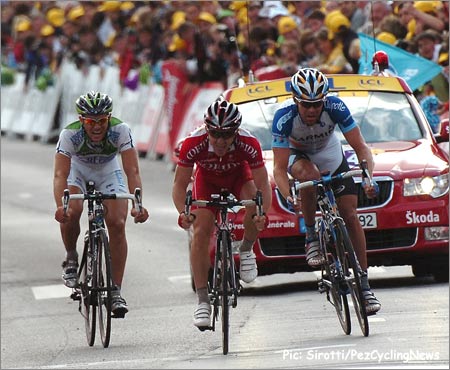 Today the boys pulled it off – the rare win from a race long break.

4. There’s a time trial tomorrow
Stage 4 is the first really significant test for the men who hope to ride into Paris in yellow, and there were also a handful of specialists who really want to win tomorrow’s time trial. This meant there were several teams who had good reasons to keep the pace steady in order to help their leaders conserve as much energy as possible. With the sprinters’ teams being the only ones with any real incentive to bring the breakaway back, there were fewer riders willing to go to the front and raise the pace.

5. The weather was cold and windy with sporadic rain showers
Cyclists race in all variations of weather, but tend to ride fastest when the skies are clear and temperatures are in the 70s and 80s. When it’s either cold or extremely hot, it affects the riders’ morale and motivation and they tend to slow down a fraction. Rain also plays into the mix by making the pack a more dangerous place to ride. A small group can often go faster in the rain because they can negotiate slippery corners and roundabouts at higher speeds. Several years ago, a particularly cold and rainy stage near the German border saw a breakaway finish more than 13 minutes ahead of the field.

6. There was a strong tailwind in the final 15 kilometers
In the final hour of racing, the breakaway always loses ground to the peloton simply because the riders are fatigued while there are lots of fresh and motivated legs driving the peloton. Turning into a tailwind with 15 kilometers to go was like adding one or two men to the breakaway, enabling the riders to keep the pace high. Tailwinds favor the breakaway over the peloton because the faster you’re going, the harder it becomes to go even faster. If the small group is going 25mph into a headwind, a hard-working peloton can go 6-10mph faster and wipe out the gap. But when the small group is going 30mph with a tailwind, it’s exponentially harder for the pack to reach and maintain the 35-40mph speeds necessary to catch them.

7. The breakaway stayed committed to the task
Many times we see the organization within the breakaway start disintegrating with 20 kilometers to go. Guys start thinking about beating the other riders in the group instead of staying focused on keeping the pace as high as possible. They start skipping pulls, playing games, and launching attacks. This has doomed many a breakaway, but not today. The four men kept sharing the work all the way to the final kilometer, driven in large part by the fact that the yellow jersey was in the offering if they could reach the finish line with a big enough time gap to the peloton.

Thankfully, I’m not a betting man because I would have lost my shirt today. The odds of a breakaway winning Stage 3 were almost negligible at the start, but gradually improved as the kilometers clicked by. Four guys, five hours of work, a more than a little luck turned the tables in favor of the breakaway and netted Sammy Dumoulin a stage win, Romain Feillu the yellow jersey, and Will Frischkorn the Most Aggressive Rider prize. Nice work, boys.