Stage 9 Analysis: This was one of those strange, in-between days at the Tour de France. The Col de Peyresourde is a hard climb, and so is the Col d’Aspin, but the overall layout of the stage meant it wasn’t difficult enough for the biggest dogs to bare their teeth. Not to worry, that comes tomorrow.

Today’s race wasn’t easy by any stretch. The pace set at the front of the main peloton cut the group down to between 30-35 riders, with everyone else riding their own tempo in groups behind. That is, of course, except for the three breakaway riders who were steadily being reeled in as the peloton first crossed the summit of the Peyresourde and then moved on to the Aspin. Stefan Schumacher tried to attack, but not only was he brought back, his move encouraged others and the pace increased so much he was dropped right out the back of the leading group. 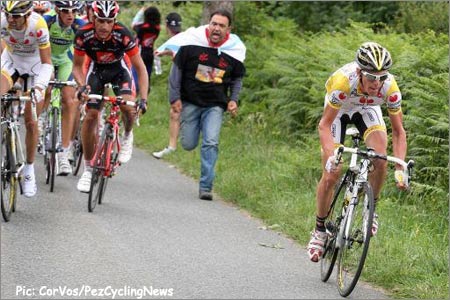 Ricco’s 30km effort to gain 77 seconds was worth if for the stage win, but the gc boys aw waiting for opportunities with a better roi.

The reason we didn’t see men like Cadel Evans, Denis Menchov, Carlos Sastre, or Alejandro Valverde attack today was because the stage wasn’t well suited for that kind of effort from a General Classification rider. When you’re aiming to ride into Paris in yellow you have to be very careful about how and when you use your energy. Attacks in the mountains are very costly in terms of energy, and you need to make sure that cost reaps huge benefits.

Riccardo Ricco put in a great acceleration and finished a little more than a minute ahead of the GC contenders, but that was a 30-kilometer effort to gain 77 seconds. It was the right move for him because winning a stage and gaining any amount of time is certainly better than finishing in the lead group and gaining nothing; and his goal at the Tour this year is to hunt for stage wins and test his limits so he can come back to try and win the overall in the coming years. On a side note, it’s entirely possible that he could shift his attentions to the climber’s jersey competition or even the young rider’s competition and potentially win one or both.

For the GC men, gaining 77 seconds by way of a hard 30-kilometer effort represents a poor return on investment. They want to gain 77 seconds, or better yet 2-3 minutes, in 10 kilometers or fewer on a major summit finish like tomorrow. Energy management is the name of the game, and it pays to hit your opponents as hard as possible at the places where you can reap the biggest gains for your effort. On the summit finish to Hautacam tomorrow, there will be no descent for anyone to regain time lost on the ascent. If a rival cracks, there’s nowhere to hide and no place to catch their breath or regroup. You just have to keep going and hope to limit your losses. 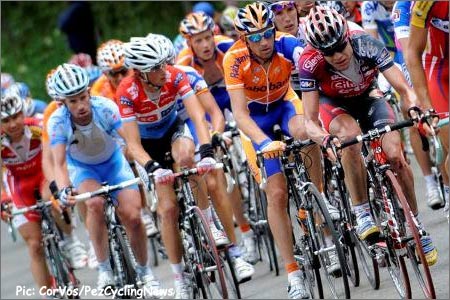 GC gains from these two days in the Pyrenees will come down to the final climb to Hautacam.

With a major showdown looming on the slopes up to Hautacam and the first rest day of the Tour de France the following day, no one has any reason to hold back tomorrow. That includes the teammates of the GC contenders. As a result, expect to see a very high pace set on the Col du Tourmalet, the 17-kilometer monster of a climb that reaches an altitude above 2,100 meters (about 6,940 feet). Teams like Caisse d’Epargne and CSC-Saxo Bank will likely use the Tourmalet to try and isolate Cadel Evans and Denis Menchov, and possibly even put them in difficulty themselves (especially since it’s uncertain how hurt Evans is after crashing pretty heavily today).

Personally, I think Carlos Sastre is – or should be – the most motivated of all the riders to go for the win tomorrow. He’s Spanish and the climbs in the Pyrenees are lined with Spanish cycling fans, he has an 88-second deficit to Evans, and though his deficits to the other GC contenders are smaller, he’s still behind Valverde and Menchov as well. Sastre has a strong team for the opening half of the stage, and even the Tourmalet, and then it will likely be up to teammates Frank and Andy Schleck to help him on the final climb. That’s not a bad duo to have at your side. If Sastre is serious about wanting to win this Tour de France instead of just maybe getting on the podium, it’s time to step up to plate and swing for the fences.

Tour de PEZ: Into The Pyrenees!