Stage 6 Analysis: I’m impressed, not only with the performances of the top contenders in this year’s Tour de France, but with the route the organizers laid out for the first week of the race. I’ve long been one of the people who says it’s the riders – more than the course – that determine how aggressive the racing is, but the layout of the first six stage of this year’s race has forced the overall favorites to show themselves, and that’s good for the image of the Tour de France.

Over the past several years, dating back to the Miguel Indurain era and all the through the Lance Armstrong era, the overall favorites were all but invisible in the first week of the race. With a succession of flat road races designed to highlight the talents of the sprinters, the best strategy for the overall contenders was to hide in the peloton and only concern themselves with staying out of trouble. But with two uphill finishes, an individual time trial, and a trip into France’s Central Massif region, we’ve been treated to repeated showdowns between Cadel Evans, Denis Menchov, Alejandro Valverde, Kim Kirchen, and Carlos Sastre. As interesting as it is to watch the sprinters compete for the green jersey, I think the Tour organizers realized that the fans really want to see the yellow jersey put in play among the top men in the race. 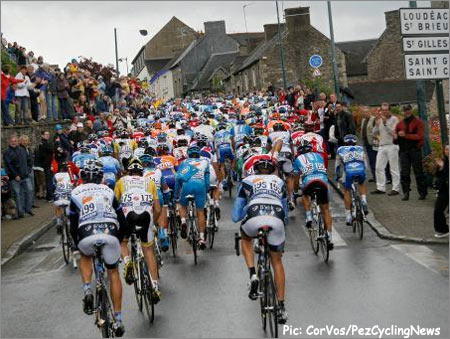 The most imaginative first week parcours in many years has forced the gc men to show themselves early.

The Massif Central region of France is a tough place. Sitting right in the middle of the country, it’s not really mountainous and it’s certainly not flat. The roads are constantly going up and down, and twisting and turning through valleys. The climbs are relatively short and nothing like the major mountain passes the racers will contend with in the Pyrenees or the Alps, but in some ways that makes this region even more difficult to race through.

The Tour de France takes either a clockwise or counter-clockwise route around France, and although trips through the Alps and Pyrenees are guaranteed, the rest of the route varies significantly from year to year. If the organizers stick close to the Atlantic coast and spend more time in the northern and northeastern parts of the country, we tend to see more flat and rolling stages that are good for the sprinters. They often take the race through the Massif Central as well, but the 2008 route is unique in that the race will pass through this region twice – in the first week and again in the third.

When the Tour de France goes into the major mountain ranges, the peloton splits into distinct groups. The front group whittles its way down to a select bunch of the best climbers and overall contenders, with a few strong teammates around for help. The rest of the pack can’t keep up with the front group and settles in to a steady pace behind in order to ride to the finish. But in the Central Massif, the climbs aren’t big enough or long enough to shatter the field. Instead, the lead group remains relatively large and in addition to the climbers and the overall contenders, many of the stronger teammates and opportunists in the pack are able to stay at the front. As we saw today, that leads to aggressive racing and a lot of attacks if the Massif Central comes early in the race. Coming in the third week it’s great territory for breakaways and hard on everyone in the fatigued peloton. 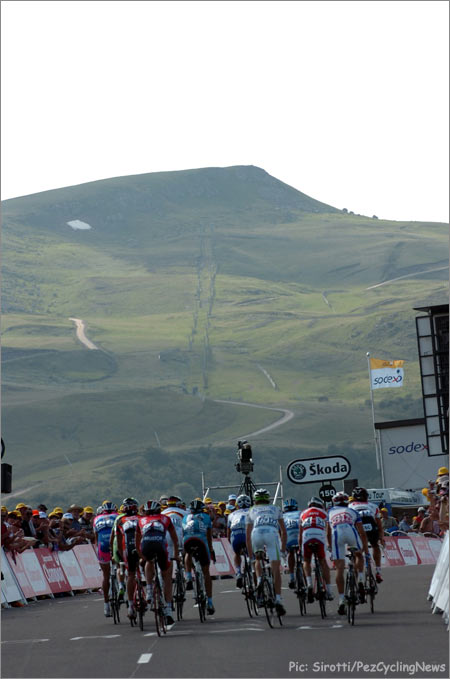 What were the ASO thinking? – A mountain top finish in the first week….???

While all of the overall contenders for this year’s Tour de France were present at the front of the group on today’s final climb to Super-Besse, the most impressive rider thus far in the race has to be Kim Kirchen. The Team Columbia rider has finished in the top 5 on four of the six stages thus far in the race, and is now leading the green jersey points competition as well as being the overall leader in the yellow jersey. Perhaps what’s most incredible about that is his consistency over such varied stage finishes. Before the Tour started, George Hincapie indicated that he believes Kirchen has what it takes to challenge for overall victory, and although we haven’t seen him in the Alps or Pyrenees yet, George may very well be right.

Regardless of the route planned by the organizers, the Tour de France is always won by the strongest and wisest man in the race. The difference this year is that the strongest men are having to show their cards earlier and more frequently than in years past. That may become an important factor in the third week of the race, where we may see riders paying for the efforts they’ve had to put forth over the first six hard days of racing.