It may not have been Gene Hackman’s greatest role, but as football coach Jimmy McGinty in “The Replacements”, he told his struggling quarterback, “Winners want the ball… when the game is on the line.” On paper, there wasn’t really any good reason for Alejandro Valverde to go for the win on today’s first stage of the 2008 Tour de France, but he’s a winner so he went for it anyway, and now he’s the man in the yellow jersey.

It’s been more than 40 years since a road race decided the first wearer of the Tour de France leader’s jersey, and with a two-kilometer climb leading to the finish today it was uncertain whether we’d see a sprinter, overall contender, or opportunist cross the line first. One thing was certain, and that was that the overall favorites needed to be very attentive and stay near the front. You may not be able to win the Tour de France in the first week, but you sure can lose it, by getting caught in or behind crashes or just by getting caught in traffic while your rivals ride away in front of you. 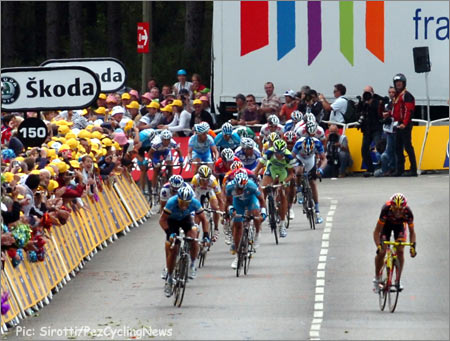 A quick look at today’s results shows that all the overall favorites (Valverde, Cadel Evans, Carlos Sastre, Denis Menchov, Frank and Andy Schleck, Damiano Cunego, Kim Kirchen, etc.) were present and accounted for at the front of the pack at the finish. Valverde won and is now in the yellow jersey, which is a dream come true for any cyclist, but can be a double-edged sword for an overall favorite so early in the race.

Having the yellow jersey places enormous pressure on a rider and his entire team. If Caisse d’Epargne decides to defend the jersey during Stage 2, we’ll see their black and red jerseys setting the pace at the front of the peloton for many kilometers tomorrow. It’s an honor to ride with the yellow jersey in the team, but it also burns up a lot of energy riders’ will need over the next three weeks. 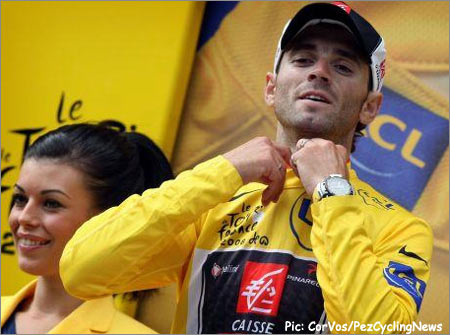 There’s no better feeling in cycling than puling on the maillot jaune – and there’s also no greater responsibility.

For the wearer of the yellow jersey, there are also additional – and time consuming – responsibilities before and after every stage. There’s the podium presentation, a press conference, doping control, and more interviews; the spotlight shines very brightly on the leader of the Tour de France. Staying close to the lead but out of the spotlight is typically seen as the perfect place to be in the first week of the Tour. You don’t want to lose time to any of your rivals, but a little less pressure early on in a Grand Tour may make a big difference in the final week of the race.

So, if it’s not great for an overall contender to be in the yellow jersey during the first week of the race, and it’s hard on his team as well, then why did Valverde make a point of saying he wanted to win today’s stage and then go out and do it? Because the yellow jersey was on the line and when you’re a champion and there’s a chance you can get your hands on the most coveted prize in your sport, you’re honor-bound to go for it – regardless of its strategic implications.