Stage 5 Analysis: Imagine flying along in a peloton that’s traveling well over 30mph and you hear a distinct hiss coming from your back wheel, followed by that squishy feeling of a tire quickly going flat. Within seconds the peloton is gone, cars and motorbikes are whizzing by, and you’re feet are on the ground for the first time in more than 200 kilometers. You get a quick wheel change and get started again, and now you have to make it back to the peloton, and not just to finish – but to help lead out your top sprinter. Sound like fun? Well, in some ways it is.

Hincapie Comes Through Traffic to Deliver Cavendish
A professional since 1992, George Hincapie has seen just about everything road cycling has to offer, and today was not the first time he’s had to chase back to a charging peloton after a flat tire. But to make matters more difficult than usual, he had just 11 kilometers to chase back on and then get to the front to help his teammates set Mark Cavendish up for the stage win. George made it back because he’s an expert at using the long caravan of cars following the peloton to make up ground quickly. It’s not a technique very many amateur racers ever get the opportunity to learn or utilize, but if you make it into some pro-am races in the US or you become a pro, it’s an essential skill. 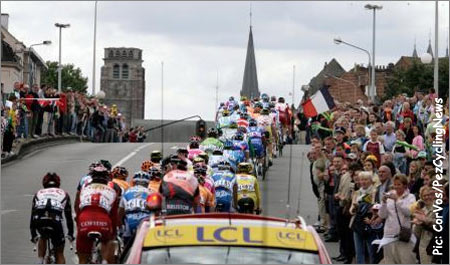 Good news: The site of the commissaire’s car signals the tail end of the field. Bad news: the strung out pack means the pace is high.

The anatomy of the caravan
Each team has two cars following the race, and there are also a bunch of vehicles carrying officials. For the racers, these 40+ cars form a kind of ladder they can use to climb back into the pack. The position of your first team car depends on the general classification, so the Gerolsteiner car was the first in line today because Stefan Schumacher was wearing the yellow jersey. Having a car near the front of the line is very important because it means quicker service if a rider gets a flat, and shorter trips to and from the car to pick up bottles throughout the stage.

Cars are your friends
Quick service after a flat or crash is important so a rider can get going again before the last car passes. Once you’re in the cars, as long as you’re not hurt or utterly exhausted, your chances of getting back to the pack are very good. If the cars are gone and you’re on your own, it’s very difficult to get back, especially in the final 20 kilometers of a stage when the sprinters’ teams are driving the pace at the front.

Playing in traffic
Technically, you’re not allowed to sit in the slipstream of any cars in the caravan, but as long as you’re making progress toward rejoining the pack, the officials will let a rider draft behind cars along the way. Moving up through the cars is an art form because the speed of the caravan changes as the road goes up and down hills, around corners, and through towns. When the cars are going fast, you sit inches behind the bumper and look through the car so you can anticipate when it’s going to speed up or slow down. When the caravan slows, you swing out of the draft and maintain your speed so you leapfrog forward and get behind a vehicle farther up in the line. This way, you’re not burning a lot of energy trying to pedal past the cars. 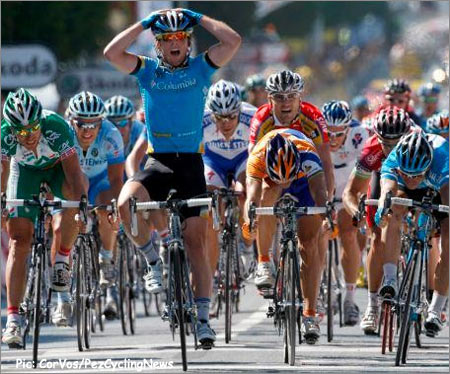 The win happens in an instant, but the set-up takes the whole race.

The opposite works too. If the cars accelerate hard, it’s better to let a few come by you and then swing in behind one further back in the line when the caravan slows again. Depending on what’s going on in the race, it can sometimes take several cycles of this forward-and-back process to make it back to the pack. When that happens, you have to be patient and realize that you’re still saving energy by riding in the cars. Hitting the throttle and trying to time trial back to the pack by yourself would take a lot more energy, and there’s a good chance you wouldn’t make it back at all.

Wait for the right moment
When you finally reach the front of the long line of cars, you’ll find yourself behind the red vehicle carrying the chief officials. These are the people who determine which team cars can pass the peloton to reach breakaway riders, use the race radio to tell team cars when their riders have flat tires or are requesting water, and hand out penalties for illegal drafting or hanging on to cars. Depending on what’s going on in the race, the officials’ car could be 30 meters behind the pack or 200 meters. The larger the gap, the harder it is to cross, so riders try to wait until the officials’ car is relatively close to the back of the pack. They also try to wait until the pack itself is spread across the full width of the road, an indication that the pace is somewhat moderate. If you get to the head of the caravan and see the pack strung out in a long line, you know the race is going full throttle and even if you could cross the open space, it will be hard to get a draft when you get there. Sometimes, riders purposely sit up and let a few cars pass them again so they can stay in the caravan until the pace calms down a bit.

George couldn’t afford to wait for the peloton to slow down before making the final juncture with the back the pack. When he rejoined, the field wasn’t strung out in a single line, but it also wasn’t just cruising along. Regardless, he had a job to do and that job wasn’t at the back, so he wasted no time maneuvering his way through the field to get to the front. Getting through the back half of the field probably wasn’t too difficult, as those riders are just concentrating on staying upright and in contact with the pack. They’ll let you come through without much issue. Further up, riders in the first third of the field are not so generous. They’re fighting for position and riding handlebar-to-handlebar, so it takes a lot of experience and power to get where you want to go. Fortunately for Mark Cavendish, George Hincapie has both.