Tactics: Different teams, different goals, different languages. Regardless of how much you’re trying to beat the other guys, there are times when everyone does favors and helps out their competitors…

For the majority of Stage 13, riders appeared to enjoy reasonably wide roads, but as the pack hurtled toward the finish, the number of roundabouts and traffic islands seemed to increase exponentially. Gerolsteiner’s Sven Krauss fell victim to one such obstacle and struck a curb and low traffic sign at nearly 40mph. Miraculously he got up and finished the stage, but on a spare bike. His original machine was smashed into a half-dozen pieces.

Garmin-Chipotle rider Will Frischkorn frequently writes about his experiences in the peloton, and often describes these high-speed finales as like riding in a video game. You’re completely focused on avoiding obstacles, staying upright, and staying close to the wheel in front of you. The trouble is that if you’re in the middle of the field you can’t see all the obstacles coming at you until you’re right on them. This is where communication and cooperation saves a lot of skin in the peloton. 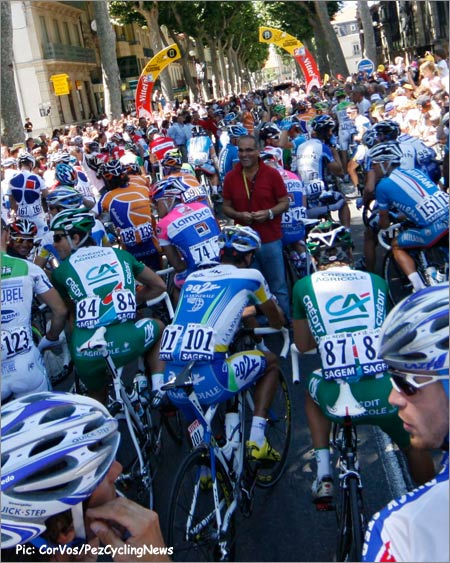 You have to remember that the riders in the Tour de France all know each other quite well. They race against each other at events throughout the year, and many have been competing with each other for more than a decade. Some level of cooperation is necessary in the field, not only to keep everyone safe, but to maintain good relations among riders. If you earn a good reputation in the pack, your career will go a lot smoother, because no matter how strong a rider may be, the larger peloton can make your life hell if you have a reputation for being reckless or careless.

Riders warn each other about upcoming dangers mostly through hand signals. A simple flick of the wrist is all that’s needed to show the riders behind you that there’s a traffic island coming up on the right or left. The same is true of major potholes or large speed bumps.

At the very end of the stage, there’s also another sort of cooperation at the back of the pack. When riders know they can no longer stay on the wheel in front of them, they will often give the rider following them a hand sling to help him cross the gap he’s left open. This is a simple maneuver in which the first rider puts his hand out behind him. The second rider grabs his hand and the first pulls him forward, slinging him toward the rear wheel of the rider ahead. It’s seen as the considerate thing to do when you’re the one who is unable to maintain contact with the pack.

Cooperation among riders and team cars also occurs throughout the stage. When riders get flat tires or are moving through the caravan to get bottles for teammates, the team directors driving the cars – even from rival teams – allow riders to draft behind their vehicles in order to help them get back to the pack. They do this because they know their own riders will benefit from the same kind of cooperation from other team cars. For the same reason, directors will often provide bottles for riders on rival teams during the mountain stages where the pack splits into many small groups.

While looking after yourself and your own teammates is the first priority for riders and the people in the team cars, cooperation and communication between teams is essential for keeping everyone safe and making the peloton run smoothly.