It always helps having a friend on the inside – and Gord’s inaugural Tour went a lot smoother thanks to the ASO’s media interpreter and all-round good-guy Dominik Englert. As part of the organization who puts on the world’s biggest bike race, we thought his story was worth telling… Everybody, meet Dominik …

Pez: Dom, please tell us where you’re from and a little about yourself. 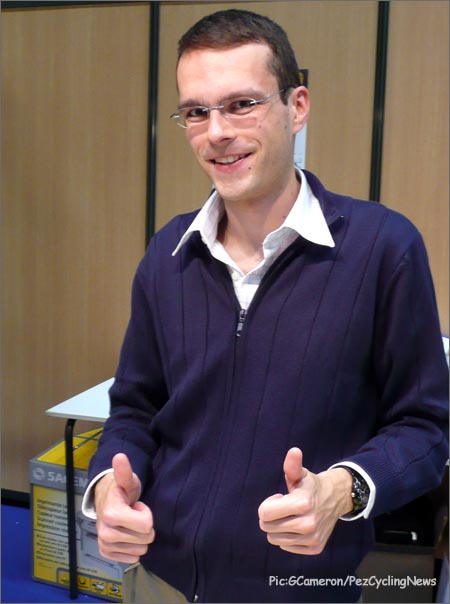 I started out as a political science student in France. I spent two years there, then went on an exchange programme to the University of British Columbia in Vancouver (home of Pez!!) which was the best year of my life. I came back and chose my master’s programme in finance and strategy in Paris and got accepted for a double diploma between my French university and a Swiss one.

At the moment I’ve just finished the first year. Then I go to Switzerland next year to do the second degree in International Affairs as I hope to work in sports event management in the future. My dream would be to get involved in the organisation of the Winter Olympics 2010 in Vancouver.

Pez: What’s your role on the Tour working for the Amaury Sports Organisation (ASO)?

Dom: I have a dual role. On one hand, I got involved in the Tour as a translator for the press conferences and for the interviews of Mr Prudhomme, for French-German and German-French translation.

My second role is managing the timetable of my boss who is the attachй de presse for the ASO. I take the easier things that aren’t too complicated but take up too much time for him. I also manage the motorbikes for the photographers and journalists following the race each day. Another element is helping to deal with the accreditation for journalists and directing the VIP to their interviews with the French media.

Pez: How involved have you been in the press conferences?

Dom: Well, I had a lot of work to do once Stefan Schumacher got the yellow jersey. He was asked to do his whole press conference in English, but with the excitement and the fatigue, he realised it would be easier in German and to have a translator.

He had to answer some very complicated questions about his recent publicised difficulties, such as his car accident and the amphetamine positive. From then on, I translated all of his explanations from German to French.

When there is no German-speaking rider involved, I am present in the media zone and try to help out German press and TV for riders from countries like France, Spain or the UK.

Pez: How did you get involved with ASO?

Dom: Well … right now, I should have been in Sydney organising the World Youth Day, but that project didn’t go ahead. I didn’t want to be lazy all summer, so I decided I’d love to work on the Tour.

One of my French university’s alumni worked for ASO and I got in touch with her. We had a meeting and got on very well. She passed my resume to the press director of ASO who was looking for a multilingual person with German skills … and here I am.

Dom: The day is pretty busy. We have an early start, and we have to be in the ‘village depart’ around an hour before it opens. I have to be present to manage the motorbikes, and to help any journalists with questions and demands.

Just before the race starts, we take the car to the finish and wait for the riders to arrive. Then I’m available for the press conferences and interviews for radio, TV and press. In the evening, we plan the next day.

It’s from about 7am until we get to the hotel at about 9pm or 10pm, then we have dinner. But I don’t consider it as work because it’s so exciting and motivating. I learn so much everyday … it’s really an extraordinary experience!

Pez: What is the ASO like? Do you have a good team?

Dom: What I’ve discovered and really appreciate is that ASO is like a small family … everyone knows each other. You have dinner together, travel together, and joke together. There have been a few parties so far, and at the end of the Tour we’ll have a special get-together for the press team, and a bigger party for everyone involved in the Tour.

There’s a fantastic team spirit, everyone is really motivated and helps each other out since we have one common goal: giving everything so that the Tour becomes a great and successful event.

Judging by this pic of Dom and his boss Stephanie, it really is like working with family.

Pez: Who’s your favorite rider, and favorite for the Tour this year?

Dom: My favorite rider was always Erik Zabel, the great German sprinter. He’s won so many stage wins in the Tour and has won many other great races. But Zabel is coming to the end of his career and has recently acknowledged having made use of drugs in the past. This diminished considerably my appreciation for him. Now I am waiting for the next generation of German stars to come through. A new clean generation that understands that the sport has changed in the last years and can present a good example for youngsters.

For the overall this year, I think Frank Schleck from Luxembourg. He’s only one second off the lead. If he’s clever he’ll avoid the yellow jersey until he reaches the Alps, then grab it and hold it all the way to Paris. Unfortunately, he speaks so many languages that I probably don’t get another chance of translating the official press conference. That’s life!

So there you go … that’s just one of the human faces of ASO. Everyone I dealt with at the Tour was super-helpful from Dominik and Thida who handled the credentials to Clement who guided the car parking to the security guys at the press centre.

Thanks to Dominik for his help and doing the interview. I think I held him back even later to finish it off!