The Tour returned to cycling mad Brittany for its send-off in 2008 and the first stage did not disappoint, as it was underlined by the ritualistically hopeless long break, plenty of wind, crashes, and one helluva finish into the hilltop town of Plumelec.

It was talked about, even predicted – at the top of the tough finishing climbing to Plumelec, the Green Bullet, the Spanish Champion, and a big time favorite for the overall: Alejandro Valverde took the win in foot stomping, barn burning, slam your hand on the table and let em gape at your cards fury. 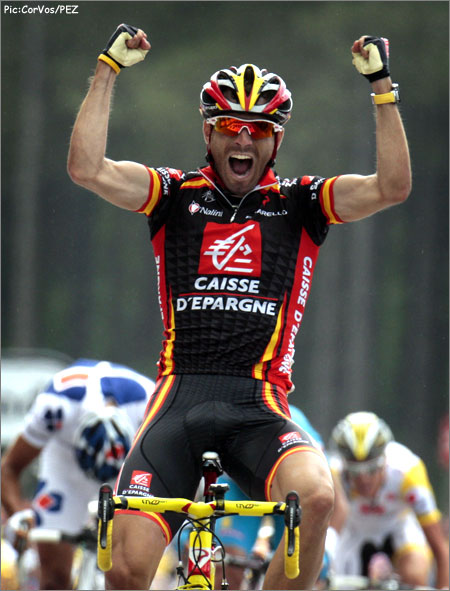 Many tried, they all failed, some fancied themselves in the sprint within the final 200m, but no one, not a soul, had an answer to the song Alejandro Valverde was singing inside the final 400m of the tough opening day of the 2008 Tour de France. The newly minted Spanish Champion is already out of his fiery new kit and into Jaune.

The Finale
High Road, I mean, Columbia, had the leadout well in hand inside of 5k to go, taking full command of the melee. Adam Hansen put in a monster turn on the front, and patrolled his first spot with brutal efficiency as he took a Gerolsteiner rider into the grass who was coming up on the inside with 3k to go.

The Columbia Express took it all the way to the start of the climb with 2k to go. The road tilted up gradually at first and there was a moment when the thought crossed my mind that maybe the sprinters had a chance after all. Then the she-beast bared her long fangs, pulled out her battle axe and started chopping off speed from the greatest the world has to offer with every pedal stroke and the formerly large-ish field began to dry up quickly.

Gentlemen, Commence Firing
Agritubel’s prodigious young sprinter, Roman Feillu, was the first to seek his glory inside the final mile and stormed to a quick gap – fortune favors the brave, right? Sometimes. Feillu’s handsome gap disappeared just as quickly as he got it as Gerolsteiner’s Stefan Schumacher exploded out of the group to an even bigger gap. This was surely to be Schumi’s day, he looked so good, but then just as quickly as he had overtaken the fading Feillu, he detonated, his gap vanished, and HE was overtaken by High Road’s Kim Kirchen. 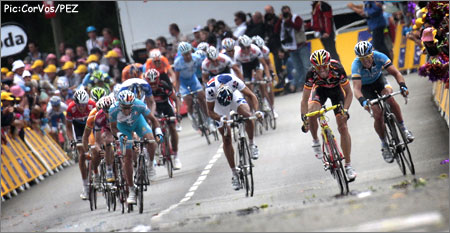 Kirchen looked even better than Schumi as he rounded the final bend into the finishing stretch. The win was surely his. Who could catch a man like Kirchen, a proven hilltop finisher, on a day like this? 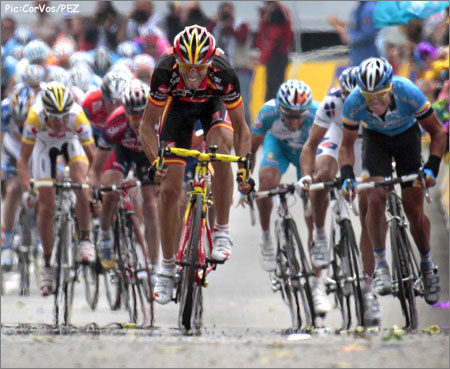 It looks close…but it’s not.

Ah yes, there was one for sure: Alejandro Valverde. For the third time in the span of a mile, a large gap got gone after a rider misjudged and went far too early. Valverde got it right. He blitzed past Kirchen like he was pedaling a Huffy with two flat tires and a broken top tube. The camera view at the line was deceiving – the aerial view showed that Valverde had literally destroyed his rivals by many a meter, and with the win, the Maillot Jaune. There was no need for a time bonus today.

Oh, There Was A Fair Bit Of Bikin Before All Of This
It’s hard to remember sometimes that there was an actual bike race leading into such a thrilling final 2k. There were 195 kilometers to be taken care of before we could see the Great Valverde wind up and knock his rivals right out of the ring. 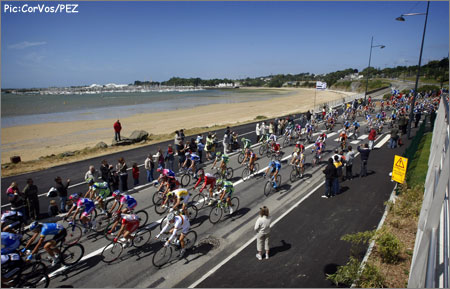 Brittany offered up pretty much all the weather available: sun, clouds, rain, wind. 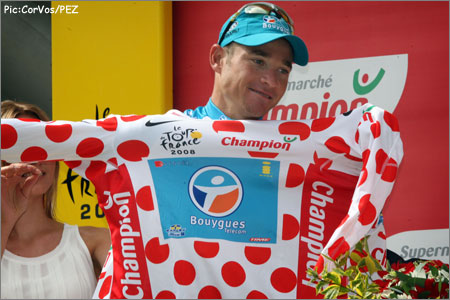 The break’s chances might have been nil, but the first Maillot Pois would be one of the lucky six. Fan fave, Thomas Voeckler, got it on a countback over Milram’s Bjorn Schroder.

So they rode around, got a fair to middlin gap, and then after a certain point, the gap began to fall, and after another very specific point with the field opening its gaping maw wide to swallow the break whole, two of the six split off for some more time off the front for god knows what reason other than to senselessly flog themselves a little while longer. David De La Fuente and Lilian Jegou were the two who hadn’t had enough in the break and they gamely delayed the catch a little while longer. They were chewed up with around 7k to go. 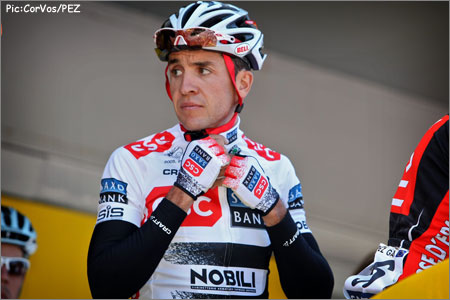 Why the worried expression, Carlos? It’s only the first day of the Tour, nothing ever bad happens today. It’s easy…ish.

There were two significant wrecks on the day: Cofidis’ Herve Duclos-Lassalle took a tumble through the feed zone 100k in and looks to have broken his left wrist. Tour de France over just over 2 hours in. Much later on in the stage, Barloworld’s big hope, Mauricio Soler, wadded it up inside 10k to go and lost gobs of time – over three minutes. Look at the bright side, eh? He appears to be fine, and now it will be easier for Soler to get away the first day in the mountains; he is so far out of GC contention already. 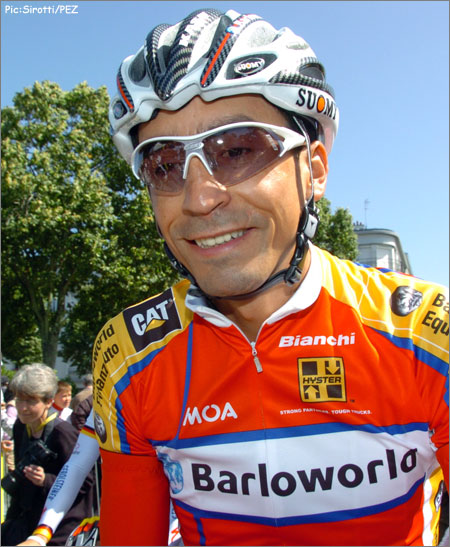 Ah yes, that’s why Sastre looked so worried at the start. He knew something bad was going to happen to somebody’s GC hopes…today’s unfortunate? Mauricio Soler. He lost over 3 minutes.

And back to overall matters: Valverde was granted a second time gap over second place Philippe Gilbert – behind the GC follows in same time order.