Race Report: This could be a very tricky stage, after yesterday’s rest the riders will be raring to do battle on a short stage of only 167.5 kilometers from Lannemezan to Foix over hard, unrelenting countryside with the first cat climb of the Col De Portel after 97 kilometers. There are two smaller hills to cross, but this stages’ course is either up or down, a stage for a “Rouleur.”

At the start Stijn Devolder (Quick-Step) was not too unhappy about losing lots of time at Hautacam and said there are more hard days to come to suit his style. He started the Tour with a fever for two days, but feels much better now. Yellow jersey wearing Cadel Evans is happy to be in the lead, but said “there is a long way to go” and when it’s pointed out to him that he only has 1 second lead, he answers; “I know, remember you are talking to someone who lost the Tour last year by only 23 seconds! So I know I have to be very careful.” 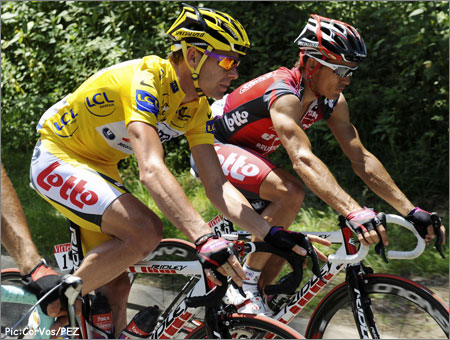 Cadel Evans passed a rather quiet first day in Yellow.

Bad news to break today is the second positive (A test) for EPO, the Barloworld, or soon to be ex-Barloworld, rider; Moisйs Dueсas, he is suspected from a blood test taken after the time trial on stage 4 in Cholet, he has also had his hotel room searched and some banned substances were found. He was sitting in 19th place overall after stage 10 and was looking forward to an overall high position. He turned Pro for the Spanish Relax team before moving on to Agritubel for two seasons and then Barloworld this season.

It also looks like the ProTour is dead! All the ProTour licensed teams that are at the Tour de France (obviously not Astana) have said that they will not register for next years UCI ProTour. So, another round to ASO, the UCI are saying the teams have “succumbed to pressure” from the ASO.

Stage 11
The battle for points towards the green jersey started early, Leonardo Duque (Cofidis) took the first sprint at St. Bertrand de Comminges (19.5 kilometers) from the hopeful Thor Hushovd (Credit Agricole) and the jersey wearer; Oscar Freire (Rabobank). With lots of action early on, three big groups attempted to get away one after the other, but were all brought back by an attentive bunch who was not going to be giving anyone a chance. 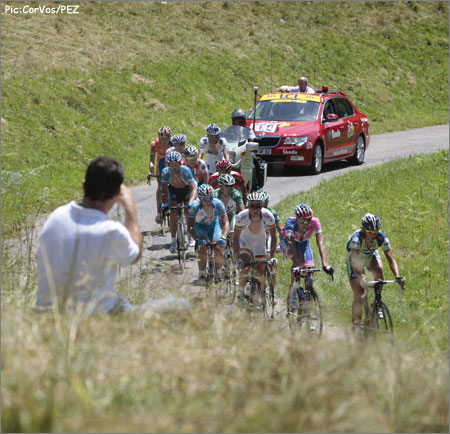 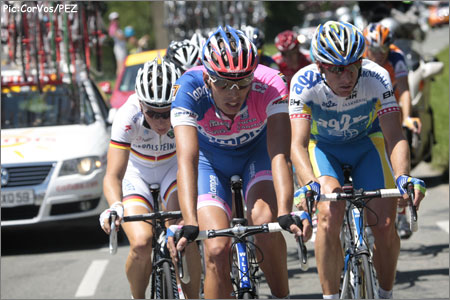 Alessandro Ballan put himself in a great position for the win today, but couldn’t quite get it.

Alexandre Botcharov (Credit Agricole) took the prime from Fedrigo (Bouygues) and Ballan (Lampre); meanwhile the bunch has let them get 6 minutes advantage. Gert Steegmans of Quick-Step was dropped on the climb and Josй Vicente Garcia was trying to cross over to them. At the sprint at Prat Bonrepaux after 69 kilometers, Filippo Pozzato (Liquigas) took the sprint from Marco Velo (Milram) and Koos Moerenhout (Rabobank), the bunch were now nearly 13 minutes behind with 80 kilometers to Foix. Silence-Lotto had the whole team on the front, but was not trying to hard to pull back the break. 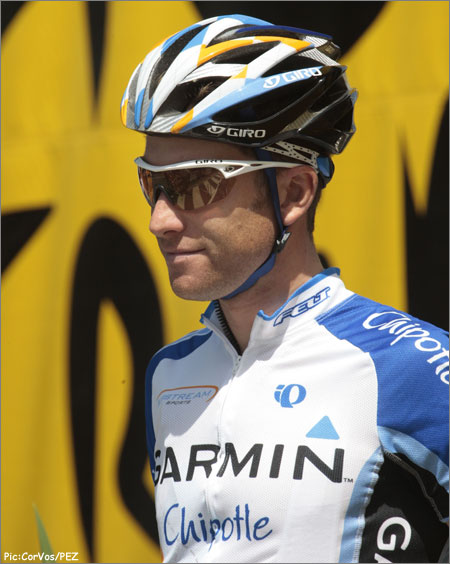 Christian Vandevelde rolled easily onward today – he sits in the impressive spot of 3rd overall, less than a minute behind Evans.

On the climb of the Col de Portel Pozzato looks pretty strong leading most of the way until Amael Moinard (Cofidis) rides away from the others and soon builds up a 40 second gap and the bunch is at an uninterested 15 minutes. Strangely, Oscar Pereiro (Caisse d’Epargne) attacks the main peloton on the climb, if he is thinking of joining the break he as a lot of work in front of him. Moinard crests the top with 1 minute 47 seconds on the break, 14 minutes 15 seconds on Pereiro and 16 minutes 3 seconds on the yellow jersey bunch. 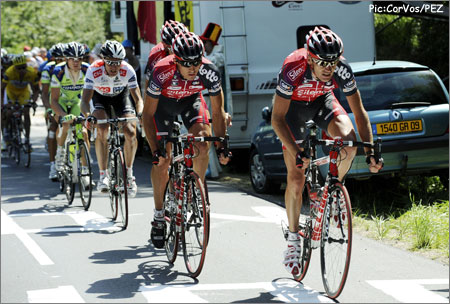 Silence got their first day on the front in defense of Yellow in Stage 11.

On the climb Mark Cavendish (Columbia) was in trouble as Cancellara and the CSC team took over leading the bunch towards the top of the Col as Silence-Lotto had lost any interest in chasing. Pereiro looks strong, but is in 17th place at 6 minutes and 1 second behind Evans, he crosses the top of the Col de Portel 14 and a half minutes behind Moinard, so a solo stage win will be a tall order! Specially as CSC are on the hunt for him. With 30 kilometers to the finish in Foix, Moinard has 16 minutes and 20 seconds on the yellow jersey, this morning he was in 37th place at 26 minutes and 11 seconds down overall, he could move up a few places, but so will the others in the break away, who with 25 kilometers left of the stage are only one and a half minutes behind him. 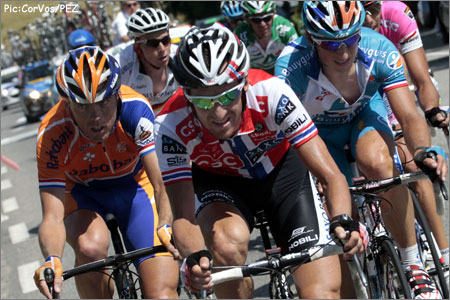 Arvesen takes his turn in the break…

The last hill of the day is the Col del Bouich and is 22.5 downhill kilometers from Foix, Pozzato (Liquigas) is trying to get the chase organized behind the solo Moinard and his advantage is getting smaller, as is Pereiro’s from the main bunch, both have less than a minute and look like they are wasting energy. CSC are still doing all the work behind, but Silence-Lotto are showing a little more interest, this is more to protect Cadel Evans and keep him near the front of the race. 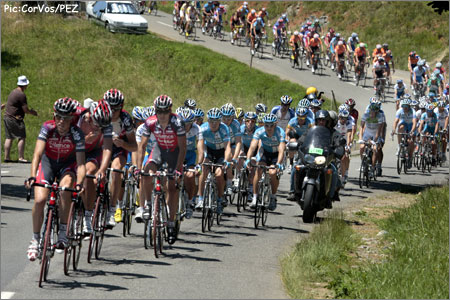 …Silence take their turn on the front pursuing the pesky solo Pereiro.

Pereiro was reeled in by the bunch as they came up to the 20 kilometer to go sign, up-front Moinard was managing to keep the 11 chasers at bay, they could see him and at one point they were so close they could smell his massage oil. Elmiger (Ag2r) attacked taking Arvesen (CSC) with him, just as they were catching the tiring Moinard with 2.5 kilometers to the line. Ballan (Lampre) crosses and Arvesen attacks. The three are together as they go under the red kite (1 km) as Moerenhout (Rabobank) gets to them, then Arvesen opens the sprint but Elmiger and Ballan close on him and all three cross together, Arvesen thinks he has it and raises an unsure hand. The helicopter camera above confirms his hopes and it’s a stage win by a tire width for the crafty CSC rider. 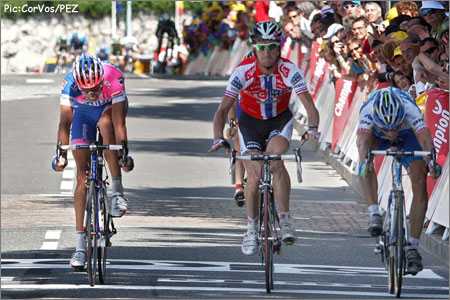 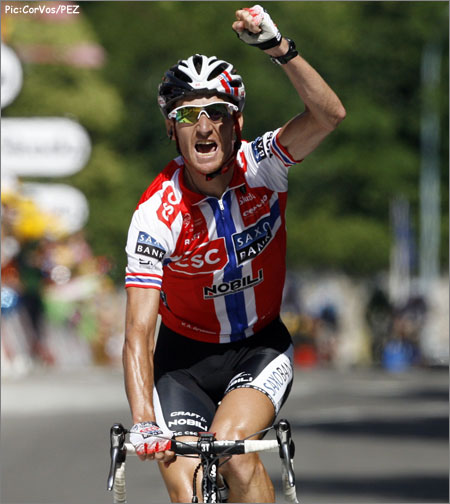 We now have to wait for the peloton to come in, this gives the TV helicopter time to have a good look at the medieval castle Foix, which is very nice. Arvesen said he had not had a great season because of a bad leg, he rode the Tour of Swiss and could feel his form coming, then he won the Norwegian National championships and is now back to full fitness. 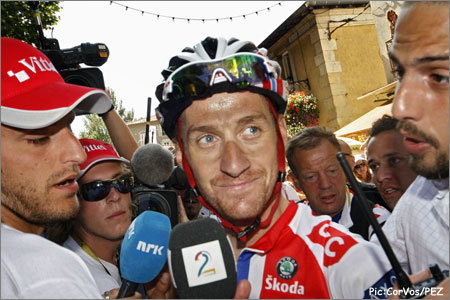 The bunch sprint was lead out by Hushovd (Credit Agricole) with Zabel (Milram) and Freire (Rabobank) on his wheel and that was how they crossed the line, not that important really. The overall hasn’t changed and tomorrows stage to Narbonne shouldn’t affect the overall either, but you never know in this Tour? 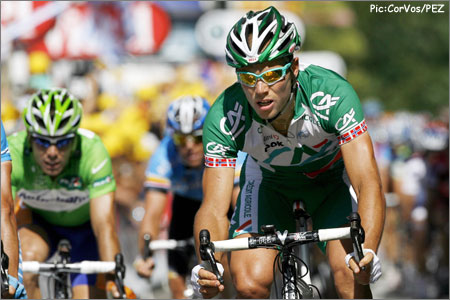 Hushovd grabbed some points on the line and now sits only 8 back of Freire.