Race Report: Paul Sherwen called him the new Robbie McEwen, but after winning 4 stages in only his second Tour, I suspect Mark Cavendish is plenty satisfied with just being his blazingly fast self. After a day of attempted breaks, the real action came to the line with the Tour’s fastmen duking it out.

While a truce until the Alps exists among the big guns, a mildly bumpy course would suit a breakaway attempt. And guess what? That’s exactly what the road to Nimes provided over 182k with only a few Cat 4 pimples for the boys to get over on this transition stage. 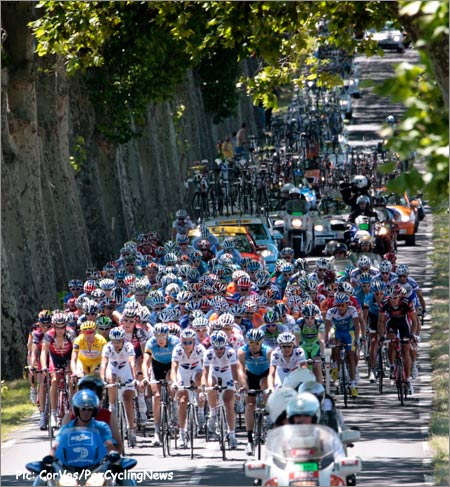 A beautiful sunny day greeted the somewhat cloudy mentality of the Tour de France, as the group lined up without yesterday’s circus act lead by Riccardo Ricco. The news this morning was that Ricco and Piepolo were sacked, Ricco for obvious reasons and Piepoli for violating “ethics codes” in the team.

Here’s the Press Release sent by Saunier Duval-Scott: After Riccardo Riccт’s arrest by French gendarmes, SAUNIER DUVAL-SCOTT General Manager, Mauro Gianetti, said he was shocked and bitter about this sad incident, adding that he understood the Tour chiefґs aggressive words and that he felt sorry for being cheated by riders he trusted. Gianetti did a personal investigation and consequently lost faith in Riccт but also in Piepoli because of a violation of the team’s ethics code. As a result, Mauro Gianetti immediately fired these two riders

By accepting the due course of these procedures, the Team Manager and the team decidedly reject doping practices: “We have always paid close attention to what our riders are doing, and have always demanded an irreproachable attitude to their profession and to our code of ethics. All our riders gave us guarantees that they were clean. Riccт swore on his mother’s head that he had never turned to illegal substances or means to improve his performance. Despite all the efforts made both internally and from outside the team we have failed to avoid this deplorable situation. We are the victims of the deceitful behaviour of those who put our sponsors’ investments and the jobs of so many honest people at risk with the loathsome purpose of improving their cycling performance.”

Early on in the stage, Florent Brard (Cofidis) and Dutchman Nikki Terpstra (Milram) took their leave of their goofily clad colleagues and went clear in the first kilometer, quickly extending their lead to upwards of ten minutes. 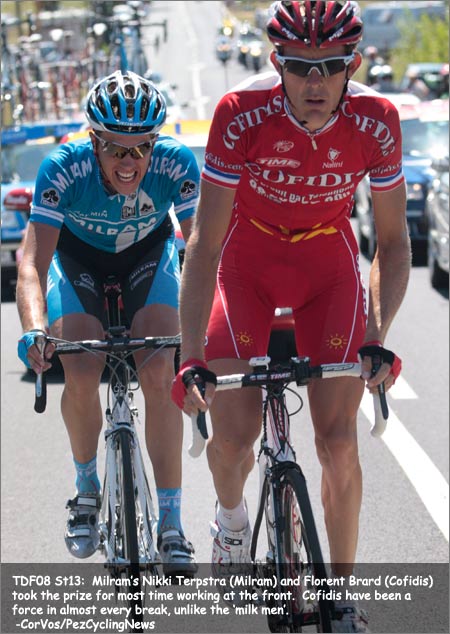 Once the group decided the gameplay (vut gameplay?) was to end, the hooks were set and the reeling began. It was Columbia most evident in bringing the group back, most likely hoping for win number 4 out of Mark Cavendish. FdJ was happy to help out pull the break back, too.

At the sprint point with 40k left, and the escapees’ gap brought down to inside 2 minutes, Brard and Terpstra had a laugh as to who was going to take the points… Brard smiled and nodded and Terpstra pulled through for maximum points. But clearly, the day’s writing was on the wall for the two men. Behind, Friere might be showing a bit of weakness as Rabobank launched Flecha to clean up the lone remaining sprint point. Maybe Oscar wasn’t feeling so hot today? 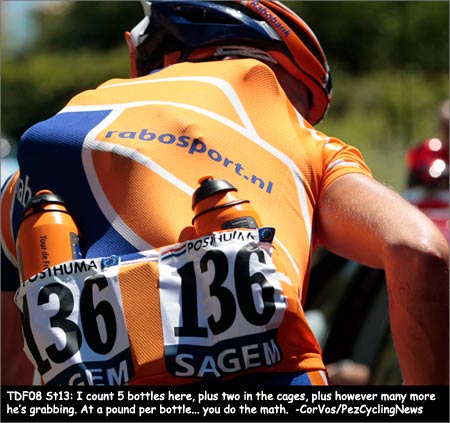 For the last sprint point Terpstra jumped Brard at the 500m mark, and off he went. After taking maximum points, he continued on without Brard, in what appeared to be a solo bid for victory. At 20k, the Milram rider had extended his lead to a minute over Brard, and 1:42 over the peloton.

It wasn’t to be. Terpstra was caught at 10k to go. A “counter” move by Bouygues Telecom’s Stef Clement went away, but was doomed to fail. In the peloton, Milram went to the front en masse and set the pace, obviously hoping to get a piece of glory for elder statesman Erik Zabel. 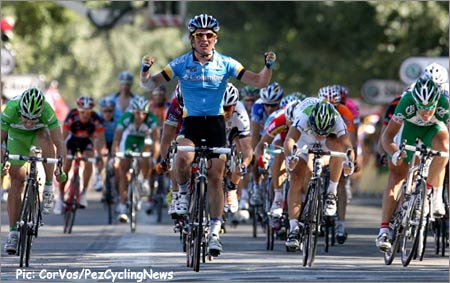 A Gerolsteiner rider had his bike literally broken in half by a piece of road furniture, but the rider was ok. Get Specialized on the phone, we’ll need another ride out here….

Sylvain Chavanel was next to try the funny business, and he split with 8k to go. Behind, Liquigas lent a hand to Milram in the tempo setting. Garmin-Chiplotle moved Julian Dean up near the front, too. The Frenchman was pegged at 10 seconds, a mere carrot in front of the greyhounds behind. At 3k, the break was over, and Columbia took over at the helm, setting up for Cavendish.

At 2k, it had sprung into one line with many teams represented on the business end. Seemingly everyone wanted the stage win today. All the big names were at the front… Zabel had second wheel with 200M to go, Credit Agricole moved Thor up on the left, and as McEwen came out of the pack on the right, Cavendish seemed boxed in. But the man from the Isle of Mann was not to be denied in his bid for a 4th stage win in this Tour de France, as he plowed through the middle to launch his unstoppable sprint. He blasted up the center and showed, yet again, a clean pair of wheels to the biggest names in the sprinting business, continuing Columbia’s Cinderella Tour.
Amazing stuff. 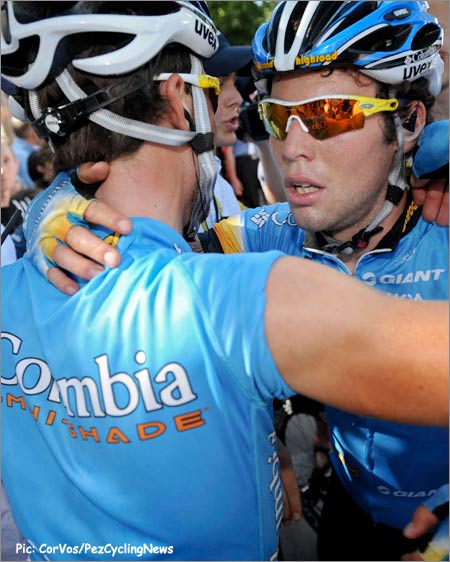