Race Report The Alps, here we come! Today the Tour leaves the south of France and heads towards the mountains, “there’s gold in them thar hills!” Well yellow anyway. From sprinter land to climber land. On today’s menu are 194.5 kilometers from the flatlands of Nimes up into the Alpine foothills of Digne les Bains. The fat lady will sing this week!

Stage 14 Action
An early break of 21 riders managed to get a minutes lead in the first 20 kilometers, and as the bunch got closer, four riders wanted to persist with the move and escaped, leaving four leaders, seven chasers and then the bunch. The four up front were Jose Ivan Gutierrez (Caisse d’Epargne), Sandy Casar (FdJ), William Bonnet (Credit Agricole) and Bram Tankink (Rabobank). The fast moving bunch soon made contact with the seven and were on the heels of the four up front, it looked like no one was getting a chance this early in the day. 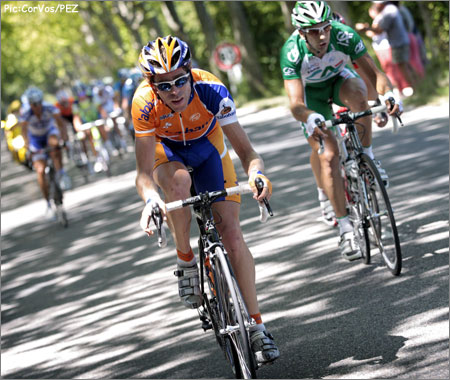 It’s not often that you get to see the picture of the day’s break actually forming – the foursome has attacked the rest of the break and are getting together.

The Bad News
Seems the bad news isn’t going to stop as the company bosses at Saunier Duval are holding the team management responsible for the actions of Ricco & co and maybe looking recompense for the bad publicity, this could be the end of the team. Barloworld has announced that they will pull out of sponsorship because of Moisйs Dueсas and his non-negative result at the “dope” test. There could be many unemployed riders and team staff next year.

Back to the Race
When the seven riders that were left between the bunch and beak were caught the peloton lost interest and the four leaders built up a lead of over three and a half minutes, but there was still 120 mostly up-hill kilometers to Digne les Bains. 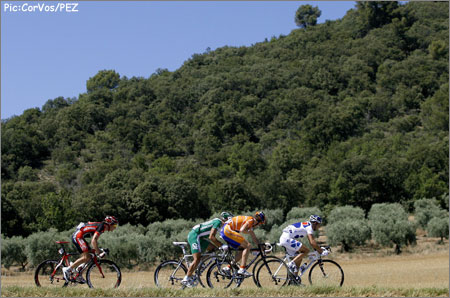 At the start Thor Hushovd said he was feeling better as he had been feeling unwell for the first few days. He said the hill near the finish might give him a chance to hang on where Mark Cavendish might not. Mark Cavendish was asked about his wins, he answered that four stages were more than he expected, but his team is working well. Asked about going to Biejing for the Olympics and whether a stage win on the Champs Elysees would not be a great finish to a great Tour? He agreed it would be good, but he will have to see how it goes as he should be training for the track. He also said his team would not try to control the race today. So he’s not expecting a bunch sprint.

The four break aways had stretched their lead to six minutes on a disinterested bunch lead by Liquigas. This is how things stayed and with 80 kilometers to the finish Bonnet, Gutiйrrez. Tankink and Casar only had 3 minutes in hand as they were climbing the Cфte de Mane (4th cat). Over the top, Gutiйrrez was first and the four hopefuls still had 3 minutes over the chasers who it looked like were happy to keep them at that distance until the last climb of the Col de L’Orme (4th cat), which is crested 10 kilometers from the finish. 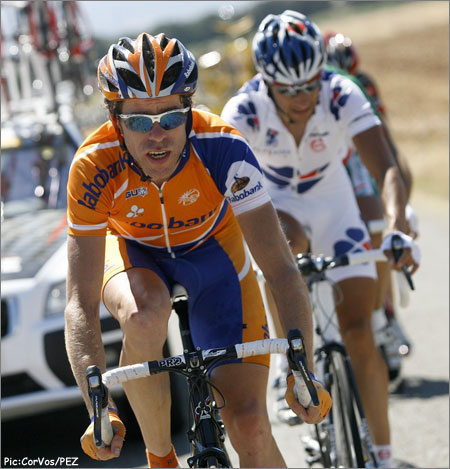 Milram had also started to help behind; they must be thinking that Zabel will be able to hang on for the sprint. After the intermediate sprint at Oraison at 145 kilometers the climb of the Col de L’Orme starts, at first it is quite a gradual rise, but has a sting in the tail with a steep last kilometer.

Gutiйrrez took the sprint at Oraison, but their gap was down to two and a half minutes as Bouygues were now helping Liquigas and Milram. Spanish TV commentators (Perico Delgado & Carlos Andrйs) were worried about Mark Cavendish, they didn’t seem to think that there would be much sun in the Isle of Man and he would not be used to today’s temperatures, yea it was a quiet day! 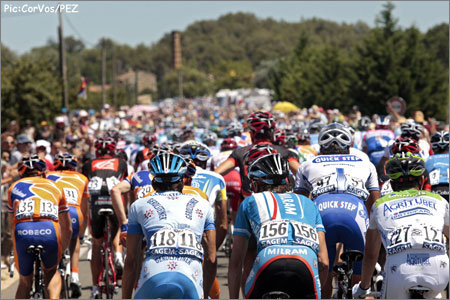 The Last 30 Kilometers
The speed had warmed up by this point and Casar, Tankink, Gutiйrrez and Bonnet only had a minute and it looked like they were on borrowed time. Gutiйrrez thought it would be a good time to attack on the twisting undulations before the climb proper kicks in. He dispatched the other three and headed off on his own, Tankink and Casar persisted with the chase, but just like Bonnet were scooped up.

Gutiйrrez was trying his hardest, probably hoping he could get over the climb before getting caught, with the sweat running off his face he was having a hard time staying out front. Gutiйrrez is caught first by Thomas Voeckler (Bouygues) and then by a flying Lampre rider, this causes splits at the back, including Mark Cavendish (Columbia). Over the top Valverde and Pereiro (Caisse d’Epargne) try to take control of the speeding bunch that is thundering down to the finish, but many riders are having the same idea that they might get away on the descent. 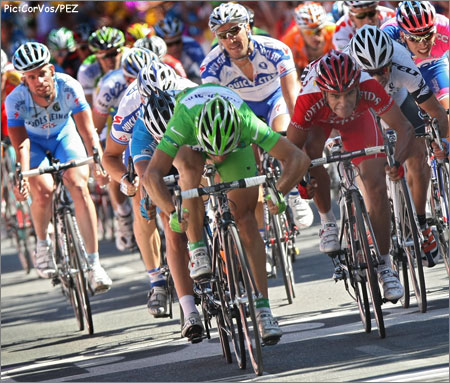 Sylvain Chavanel (Cofidis) makes a good go of it with 5 kilometers to Digne les Bains, swooping through the wide bends causing the peloton to stretch out to one thin line. Columbia do the work to pull him back and lead out the bunch even though Cavendish is not there, Freire and Zabel are and at one point it looks like the old man Zabel has it, but as usual the sneaky Spaniard Oscar Freire comes from about five places back and passes everyone to win clear, helping his aim to keep the green jersey to Paris. 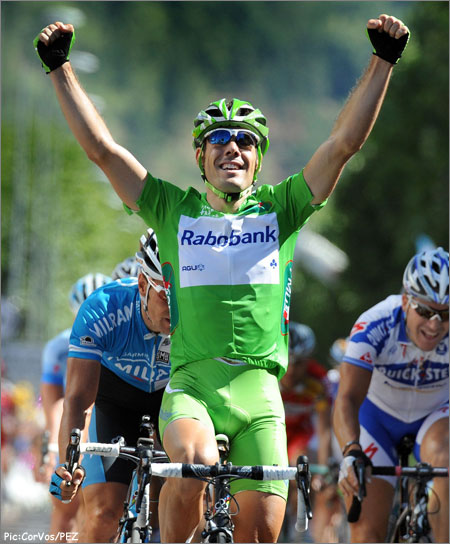 It was a bunch sprint of sorts, but many of the sprinters came in over 6 and 7 minutes down. Freire at the finish said it was a “perfect stage for him as the hill got rid of the sprint favorites like Cavendish. It’s a long way to Paris and with luck I’ll be there in Green, but we have the Alps to come”. Cadel Evans said he hoped to get a good night sleep tonight before it all starts tomorrow in the Alps. 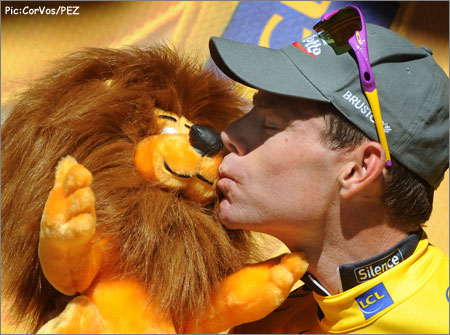