Race Report: The first day in the Alps for the Tour was dominated by bad weather, abandons, crashes, changes in the General Classification and a long four man break that included eventual winner, Aussie, Simon Gerrans. And it all came down to a rock ’em sock ’em road fight on the slopes to Prato Nevoso!

With a finish at altitude, the massive HC category climb of the Col Agnel (2744m) after only 50kms of the stage and atrocious weather, the mood at the start was tense today. One rider choosing not to get wet was four time stage winner Mark Cavendish (Columbia) who decided to go home before the start to rest up for the Olympics whilst two riders who wished they’d decided not to start were Stjin Devolder (Quickstep) and Mark Renshaw (Credit Agricole) who were both said to be ill and abandoned on the huge Col Agnel. 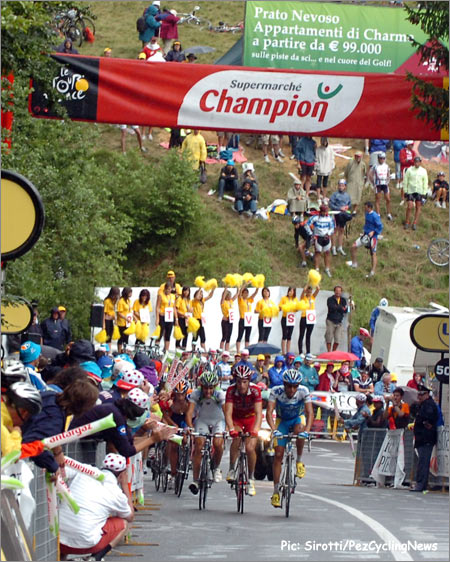 The Italian crowds were huge – wish we could say the same for Italian riders’ performances. 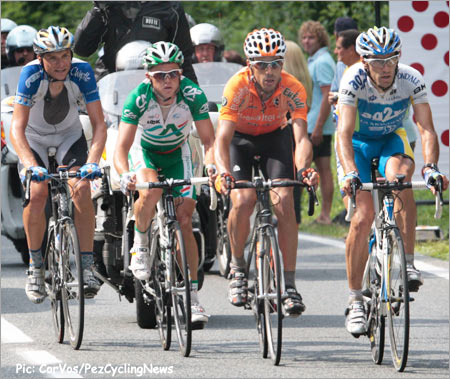 You just never know how the early break will do….

With absolutely no threat to the overall in the break, Cadel Evan’s Silence Lotto boys let them go and the gap quickly elevated to nearly 17minutes before Lampre started chasing. Obviously hoping to set up an Italian win for Cunego at the end of the day, Lampre were chasing hard before the chase was called off following an horrific crash to Oscar Pereiro (Caisse d’Epargne). The 2006 Tour winner fell on a descent, just before a switchback and was catapulted over the guard rail, falling over 5metres onto the road below (after the switchback) where he then lay, not moving as the entire peloton tried to avoid him as they rode past. Visibly shocked by the site, the entire Caisse d’Epargne team stopped for Oscar and the peloton caused a temporary truce on their chase. Luckily for Pereiro he survived, but was quickly evacuated to hospital suffering from numerous injuries including a serious leg injury and a broken shoulder. 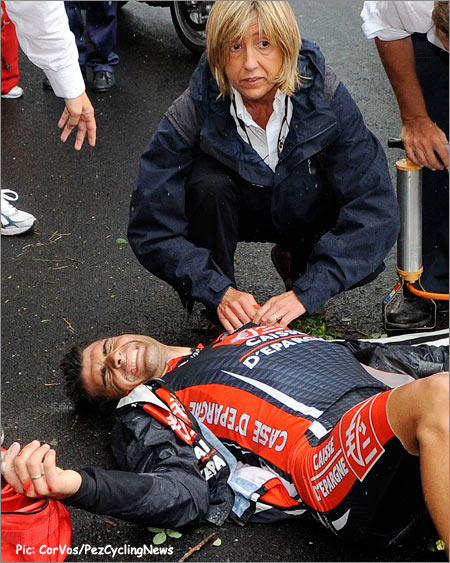 Crashing is always scary, but today was a horror show – . Pereiro broke some bones, while countless others left skin and blood on the roads.

Approximately ten kilometres later, the chase started again by Lampre, but with such a large gap to the leaders it was looking good for the foursome out front. Still the peloton was chasing hard when the second big crash of the day occurred in the peloton with 20 riders crashing at the same time, but in two separate accidents! The peloton was negotiating a roundabout and split into two when 8 riders went down on the left hand side of the roundabout and 12 riders crashed on the right hand side.

As the crash(es) occurred at the front of the peloton, numerous favourites were amongst the fallers including 3rd place overall Vande Velde (Garmin), Cunego (Lampre) and white jersey holder (Nibali). Fortunately everyone was ok, despite the speed and spectacular nature of the crash but once again the chase of the breakaway was neutralised. After this incident everyone realised that the stage victory would be fought amongst the four breakaway riders and it wasn’t until the start of the finishing 1st Category climb of the Prato Nevoso (1440m) that the fireworks started to occur – both in the break and in the peloton. 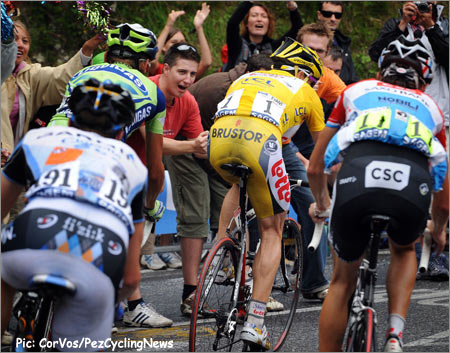 CSC layed the heavies on Evans, but he hung tough. With a long TT still to come, Schleck the Elder is gonna need to do a lot more damage before they leave the Alps.

The best climber on paper in the break, Martinez, attacked early quickly dropping Arrieta but not the strong duo of Pate and Gerrans. The young Aussie was actually in the most difficulty on the climb getting dropped numerous times under the attacks of Martinez and Pate before fighting back each time. A great spirit shown by Simon was well rewarded in the final 400m as he attacked the others finishing 50m ahead of Martinez and a further 100m ahead of an exhausted Pate for a well deserved victory. 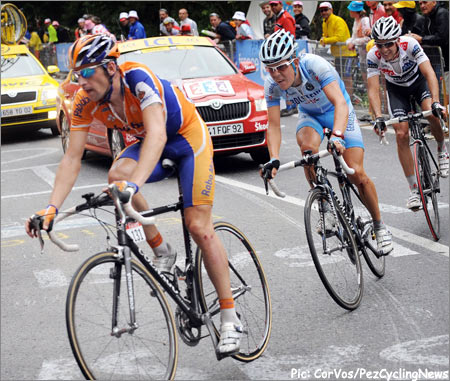 Denis Menchov came out fighting – his first attack on the last climb was nullified by a crash on the rain-slicked roads, so he got back on a rejoined the battle.

Meanwhile back in the peloton , the entire CSC team started breaking things up on the run to the climb reducing the ‘peloton’ to a small group of 10-12 riders by the time the slope got serious. Sastre (CSC) then attacked, before Evans and Menchov (Rabobank) brought him back and things settled down for a short while before Menchov launched an attack of his own. Incredibly this attack failed though as he fell on the slippery roads all by himself whilst climbing!

Luckily for the big Russian he was able to remount and rejoin the group as it rode past with no time lost. Shortly after rejoining the group, Menchov attacked again with Kohl (Gerolsteiner) and Carlos Sastre following. This threesome rode away from all the favourites with only Valverde (Caisse d’Epargne) able to scamper across the gap as Evans, Franck Schleck and Vandevelde all struggled on the finishing kilometres of the climb. The yellow jersey of Cadel Evans looked especially tired in the finishing kilometres unable to respond to the four riders in front as Kohl was seemingly riding away with the yellow jersey. Franck Schleck wasn’t finished though and he attacked in the last kilometre, dropping Evans to claim the yellow jersey for himself by only 7 seconds over Kohl and only 8 seconds over Evans! 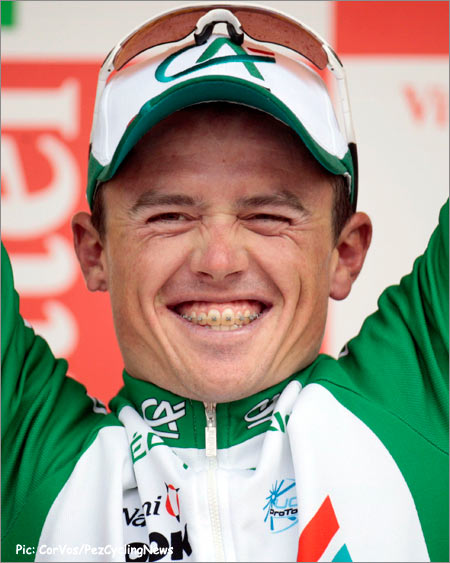 Braces be damned – this one’s worth smiling about!

What a stage! What a Tour! With 6 riders still within a minute of the lead and two Alpine stages and one time trial still to come, this Tour is far from over. Keep it tuned to Pez for all the latest!