Race Report: The penultimate day in the mountains looked to be a doozy on paper – two hors categorie climbs including the highest pass of this year’s Tour in the Bonnette. The race, however, did not finish on the Bonnette, but down the other side in Jausiers, and an entirely different race was had as a result – it was a day for the breakaway. 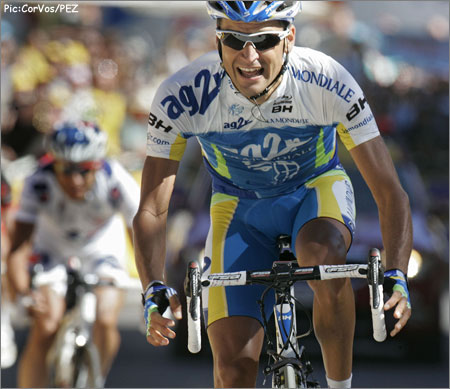 Behind, in the Gruppo Maillot Jaune…there wasn’t too much to talk about. With the closest Tour de France in history nearing its climax, there were big hopes for haymakers, upper cuts, kidney blows, and knock outs, but unfortunately, we got nary a bit of that, save for a few death defying crashes, a lot of status quo, and two victims losing some time within the Great Six – the six who will decide Le Tour.

The big casualty on the day was Christian Vandevelde. The Garmin-Chipotle rider, who is enjoying the ride of his life, ran into a bit of difficulty on the final climb of the Bonnette, but really ran into problems when he dumped it on the descent. Vandevelde lost 2:35 on the day and now sits 6th overall at 3:15 behind…Mr. Frank Schleck. Denis Menchov was the other from the Six to lose time, but his losses weren’t too massive – 35 seconds. Still, this stage was not raced 100%, so for Menchov to lose time – that’s pretty much unacceptable and could well put paid to his chances.

The rest of the six, four that is, came in together: Frank Schleck, Bernhard Kohl, Cadel Evans, and Carlos Sastre. GC remains the same amongst them:

So when you look at it now, there are three climbers and a hybrid in there – indeed, it looks like Cadel Evans might have come out the best of anyone today, as he put time into two time trial rivals in VDV and Menchov, and stayed even with the three mountain specialists. Cadel needs only to get to the top of Alpe d’Huez tomorrow in respectable fashion and it’ll be his to lose.

That’s about all there is to say about THOSE guys. The real story for Stage 16? The breakaway: 35 riders today. True, 35 riders were never actually together, but 35 riders were up the road for most of the day. 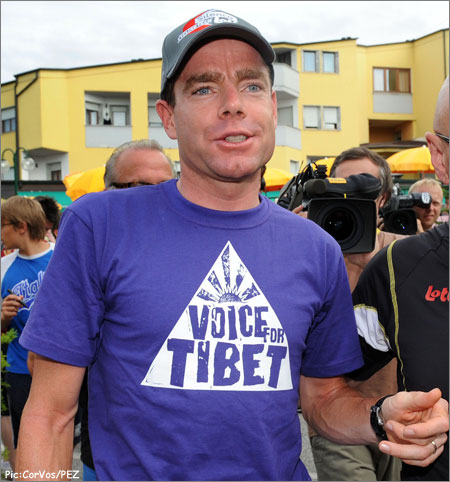 Cadel Evans looked much better today after a rest day to forget about his Stage 15 woes.

A group of five led by today’s hero, Stefan Schumacher, as well as Thomas Voeckler, Samuel Dumoulin, Christoph Le Mevel, and Sebastien Rosseler led the race into the first climb of the day, the Lombarde. Behind, a group teeming with bike racers chased, but took eons to make contact (as in: most of the way up the final climb), and when they did, only a small, tiny, itty bitty piece of the original group was present. The names of the players:

It didn’t take long on the first climb of the Lombarde for the break(s) to shake up. Rosseler, Dumoulin, and Le Mevel were sent packing with their heads hanging low, huffing and puffing, back to the chasing group numbering somewhere near that of a small town. Then there were two: Schumacher and French hero Voeckler. Unfortunately, Voeckler didn’t stand a chance to Schumacher’s GC credentials and he too was cast adrift back to the chasers. 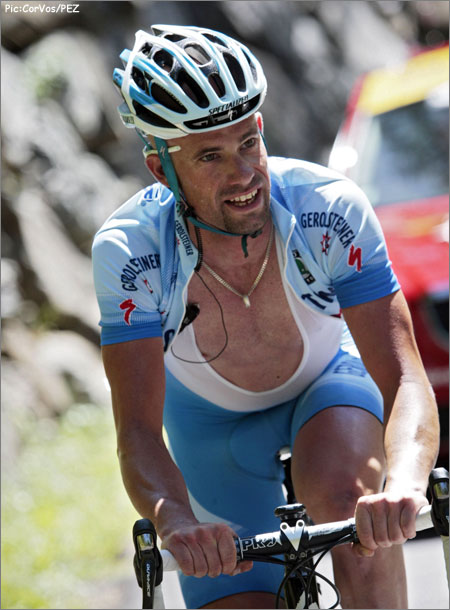 Schumacher was the day’s hero, but he couldn’t quite hold on for the win.

And then it was the shaven German all by his lonesome, galloping ever upward to the summit of the first of two Hors Categorie climbs.

Yes, there were time gaps, the time gap went up quickly at the beginning, leveled out somewhere in the middle, and eventually began to drop. We won’t delve into THOSE specifics, cool? Cool. 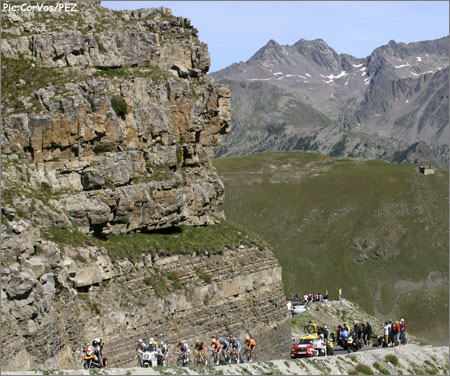 With so many riders representing so many teams back in the village of chasers, there was bound to be some action, and sure enough, there was Damiano Cunego leading a small group in an attempt to bridge up to Schumi. Oh, I’m sorry, your request has been denied Signor Cunego. Indeed, the lone German was too much for the Kid’s group, and it was Schumacher who crossed the top of the Col de la Lombarde alone with a big gap over all comers – doing the two-fold duty of taking the race by its proverbial balls and going for the stage win, whilst sucking up mountain points to defend his teammate Bernhard Kohl’s Maillot Pois. 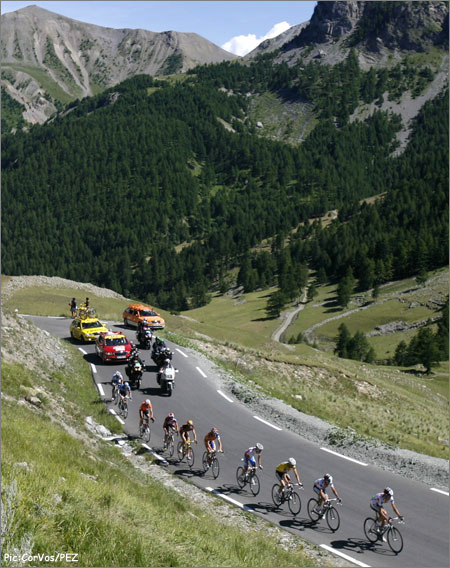 Down Schumi plummeted off the Lombarde crouched low on his top tube, trying desperately to better the time of the falling rock. At the bottom of the descent, after successfully defeating the falling rock, the chip on his shoulder Schumacher (remember that crash that lost him Jaune? Sure you do), cleared the 10 or so miles of valley road with no worries and began the gigantic climb of the Col de la Bonnette with almost three minutes on the ‘Cunego’ group of 30 and 10 minutes on the CSC led field. And yes, CSC was in full control of every bit of the proceedings today: 7 men in the peloton, two up the road in Arvesen and Voigt.

Immediately, Schumacher’s once seemingly guaranteed stage win started to look a little bit further off, a little blurry around the edges. His gap began to erode like a California hillside with a bajillion dollar mansion perched atop…if you will.

6k into the towering ascent, affairs started to take a little better shape. Half of the small migrating village was dispatched to start with, then of the other half, it too was split into half with a group of 8 and a group of 7 chasing the faltering baby blue figure of one Stefan Schumacher…and Cunego’s dismal Tour continues – he was part of the first half drop. 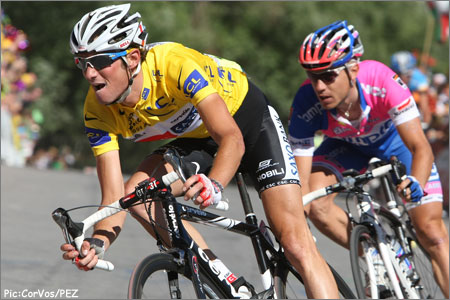 Cunego finished in the group with the favorites…unfortunately, he was only there because he was dropped out of the break.

Towards the top of the Bonnette, the chasers finally caught their much sought after prey and the group at the front end of the race consisted of: Popovych, Arroyo, Portal, Hincapie, Siutsou, Augustyn, Valjavec, Schumacher, and Casar. 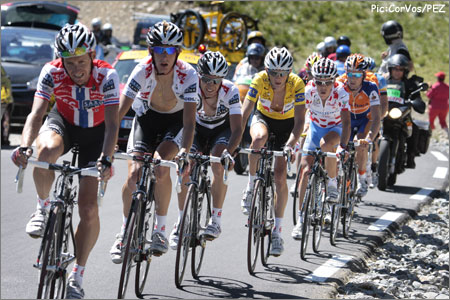 Behind, CSC was flexing some serious muscle and when they finished flexing they started swinging – all of the support riders in the peloton did their job, and when they were done, Kurt Asle-Arvesen and Jens Voigt dropped back from the break to do their part, and by that time, there weren’t all that many survivors that had made it through the daytime bombing of the slopes of the Bonnette.

Up ahead, back in the break, Barloworld’s John-Lee Augustyn made a big move out of the leaders to go for the mountain points and hopefully the stage win beyond that. His brave effort very nearly was his ruin, as he came to grief on a bend on the descent not long after that – he plummeted a solid 25 feet over the edge of the road – and his bike just kept on flying many, many feet below that. It was a jaw-dropping moment of horror, but he was fine – and incredibly came in only 5.5 minutes down on the day. 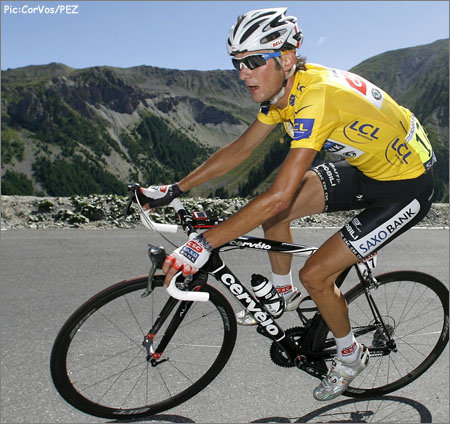 Frank Schleck enjoyed a solid day in Yellow behind the awe-inspiring support of his CSC team.

So with Augustyn out of the picture and a number of riders dropped, the lead group was but four: Dessel, Arroyo, Popovych, and Casar. They safely navigated the descent and Dessel safely took care of his three rivals in the sprint. 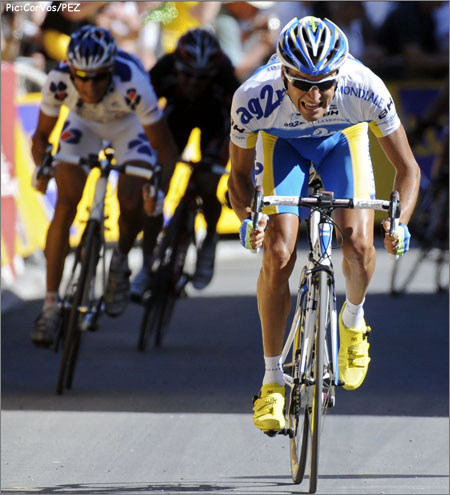 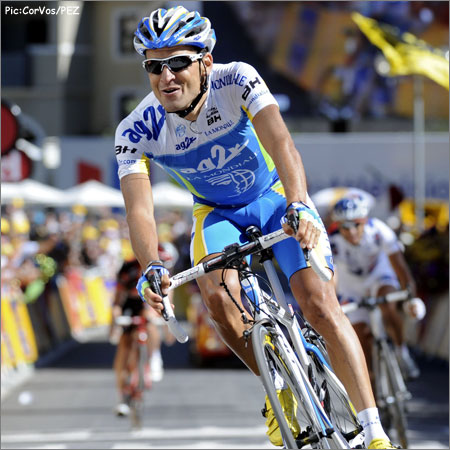 Only 1:28 behind the eight survivors from the 35 that started the day off the front, came the big boys sans Menchov and Vandevelde. 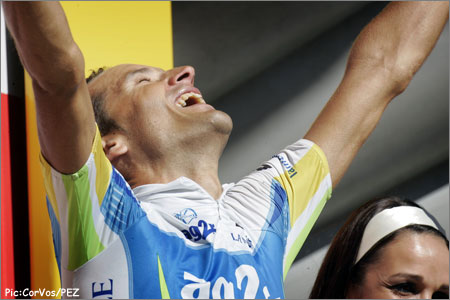 It was a happy Dessel on the podium this afternoon.

And so it was…a fairly interesting day, but nothing like what we had hoped for. Methinks there will be no complaints following tomorrow’s stage. It’s time for Alpe d’Huez boys and girls, so make sure you find yourself some kind of live coverage and then tune in to the PEZ take! 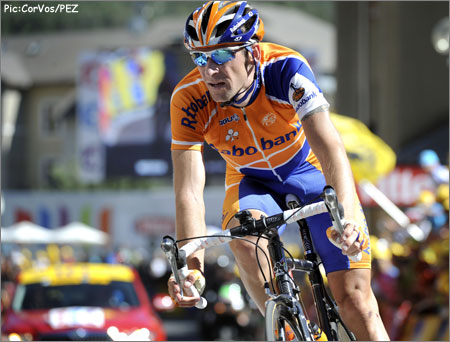 Denis Menchov suffered a very unfortunate 35 second loss to the top 4 on GC today…he has to hope for something great tomorrow.