Race Report: We all hoped for a battle royale of the most epic of proportions on today’s final day in the mountains, which culminated with the illustrious ascent of Alpe d’Huez. Carlos Sastre made it simple though – he nailed it from the bottom and never looked back. An amazing tactical play executed as only CSC would have thought…

Indeed, Senor Sastre has been around close to the lead many times, but he has never made the kind of move that defies belief, that says – I want to win the Tour de France, long time trial and Cadel Evans be damned, but there he was, barely 1k into the climb of l’Alpe, one attack, followed by Denis Menchov, a slowing, a second attack – no one following. 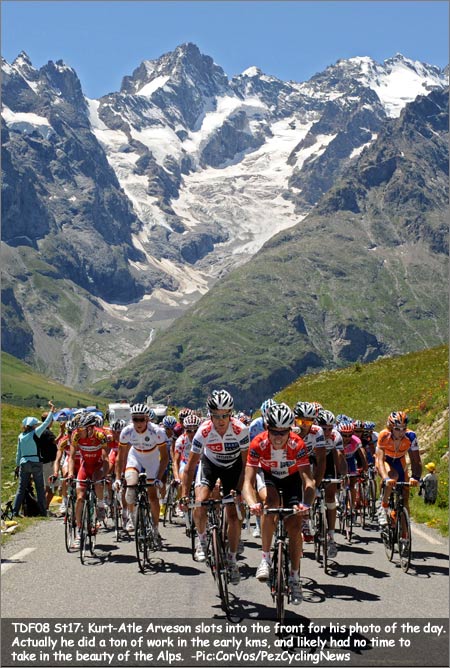 Sastre got out his bricks and began to build his lead, one brick at a time. First 5 seconds, then 10, then 30, then a minute, then two – peaking out at almost 2:30, before coming down to just over 2 minutes on the line. Sastre rode the whole mountain solo and never faltered.

Behind, the race was a comedy of dullness. There were attacks, major slowings, droppings, but then regroupings because no one would take up the pacemaking, and when they did, the pacemaking somehow fell on the shoulders of AG2R’s Stephane Goubert – hardly mountain man material. In fact, most of the animation in the Gruppo Maillot Jaune was provided by AG2R, in the form of a number of attacks from Vladimir Efimkin, and then some strong riding by Goubert as well. There was nothing wrong with it, but at times, the pace in the Yellow Jersey group was agonizingly slow, and for CSC it was perfect. Their trump card up the road, and two incredibly fast brothers there to shut anything and everything down.

When Cadel Evans was finally forced to defend his greatest asset: his time trialing prowess, and not lose everything on Alpe d’Huez, even his pacesetting was barely enough to slow the hemorrhage of time wrought by Sastre.

All the while, CSC just sat there and enjoyed the show. The Brothers Schleck looked invincible. While Evans looked like he had moments to live before the black hood was pulled over his head, Andy and Frank Schleck looked like they were on a weekend group ride. It became apparent early on that only CSC and Evans were dueling…everyone else was in some way unnecessary. Alejandro Valverde put in a few strong accelerations, but who really cares about the Green Bullet anymore? Denis Menchov looked powerful for 30 seconds at the bottom of the climb, but then went straight out the rear end of the group before fighting mightily to catch back on – but it was obvious he was a null factor.

Mountain King, Bernhard Kohl, probably rode the savviest race of the day. He did some early first wheel action looking solid, but it was obvious after each attack, that Kohl was in a bad way. He’d be gapped off a bit, ride back on, and immediately take up residence in 2nd or 3rd wheel, so when the NEXT attack came, he had some bodies to drift through when he experienced yet another mini-detonation. 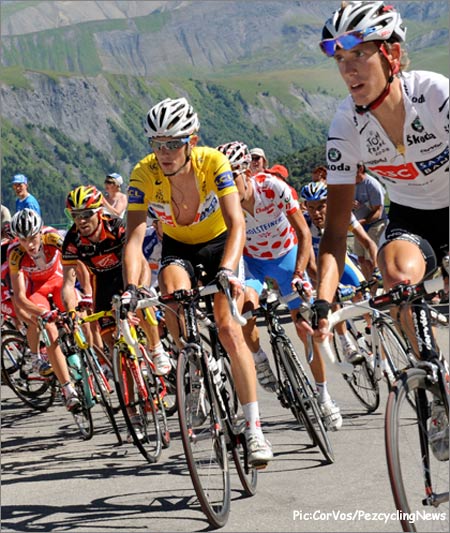 So the CSC master plan was finally laid bare – Carlos Sastre was always the man. He was the one all along. Only the lengthy final time trial will see if putting their eggs in Carlos’ basket will pay off. 1:34 over Cadel Evans isn’t much. It’s a lovely cushion though – don’t get me wrong, but if tradition holds true, Evans could be laughing his way onto the Champs d’Elysees in a few days time. Of course there’s that whole, the Yellow Jersey gives you WINGS bit to deal with.

So There Was A Race Before All Of This
Yes, they raced a good long way today – over six hours over the Col du Galibier, the Col de la Croix de Fer, and finally the She-Beast, Alpe d’Huez.

A break would once again hammer the early proceedings with hard work and perseverance…and not one bit of reward. U23 World Champion Peter Velits, the ever agressive Stefan Schumacher, Remy Di Gregorio, and Ruben Perez made up the main break of the day. Di Gregorio and Perez would meet their demise during the first part of the stage, leaving the day’s work to Velits and Schumacher. Schumacher too couldn’t handle yet another day off the front and succumbed to the pain and suffering of the Pass of the Iron Cross.

…Leaving one Peter Velits out front all by his lonesome.

Over the top of the Croix de Fer, Velits had just under 2 minutes at his disposal when Bouygues Telecom’s Jerome Pineau leapt out of the field and made a miraculously quick bridge to Velits. Pineau immediately went to the front and did the work of two men heading down across the valley road en route to Bourd d’Oisans…and that climb.

Through the valley, it was all CSC, just as it had been all day long. The vastly diminished field, which couldn’t have numbered much more than 30, was a long line, single-file from front to back as Kurt Asle-Arvesen and Fabian Cancellara knocked on the door of the Pain Cave, walked in, and took a seat next to the warm fire of Hell. There, see, that’s a new rendition on a cliche…that’s ok, right?

At last the race hit the lower slopes with 14k to go and immediately Carlos Sastre attacked. I must admit that mine eyebrows did a fair bit of arching when I saw this…even moreso when Denis Menchov followed with apparent ease. Evans was a match for this first little tap to the temple, but had nothing for Sastre’s second move, which saw Denis Menchov go straight back through the remainder of the field, parachute and anchor firmly attached (luckily for Denis, he managed to chop off both and rejoin the party).

And that was the story of the climb – Sastre went from the bottom as he HAD to do to have any hope. He accomplished that first requirement, and then pulled off the hard part: riding the climb of his life.

There was a sort of stasis in the chasing group once Sastre was gone, as we’ve noted before. Sure, there were numerous attacks, moments of nail-biting tension, but no one could make the difference to get away…or no one had the go ahead (the Schlecks) to really have a go of it. 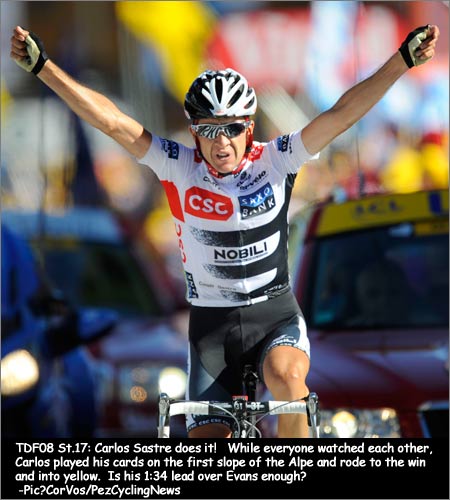 It wasn’t until the final kilometer that some real bike racing was once again had, and everyone’s favorite under-achiever, Sammy Sanchez, provided the show. Sammy attacked in fine fashion over the top of Cadel Evans and instantly got a solid gap. Unfortunately for Sanchez, he had the Schlecks to deal with, not to mention the seemingly god-like A Schleck today. A Schleck covered the move and seemed to have 2nd place wrapped up when SS dug mighty deep and just got by the young Schleck to take 2nd on the day. Not too shabby.

Right behind, everyone was pretty much together, and now all eyes turn with great interest to the final time trial. It seems like we’re always looking to the next decisive day at this Tour, because no one day has yet proven decisive.

Tour De PEZ: The Roof of The Tour