TdF’08 St.2: French Favorites On The Attack But Hushovd Is Back!

Race Report: The two big French housewive’s favorites, Sylvain Chavanel and polka dotted, Thomas Voeckler dominated the day’s action, but it was Thor Hushovd who dominated the final run in with a well timed sprint.

A 164km journey in the North West of France awaited the riders today but unlike the yesterday, the finish was a flatter climb – with a bunch sprint predicted by almost everyone. That prediction didn’t stop the riders from trying for the long range breakaways though, with Jens Voigt (who else?) amongst the first to get in on the action.

Nothing could stick though until just after the first KOM climb at 25km when the two Frenchmen, Sylvain Chavanel (Cofidis) and Thomas Voeckler (Bouygues Telecom) rode away. Voeckler was clearly interested in wrapping up the remaining KOM points throughout the stage after starting the day in the climber’s jersey, whilst Chavanel was thinking of the stage win. 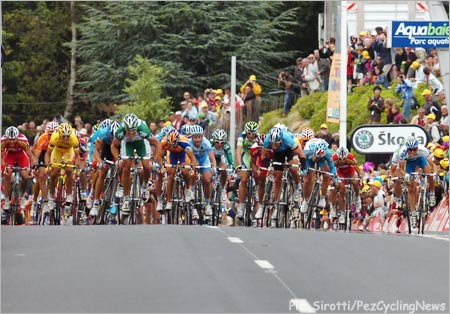 Sure enough Voeckler cleaned up most of the points on offer to take control of the climber’s jersey for at least another day, whilst back in the peloton Christophe Moreau (Agritubel) and his team mate, David Lelay launched on the final climb of the day to take the remaining climber’s points. Seemingly yes, everybody in the peloton looked at each other thinking that was the case, but no – Christophe and David had other ideas and instead made a strong attack, crossing the gap to the two leaders easily with 57km still remaining in the stage and a lead over the peloton of just 3 minutes. 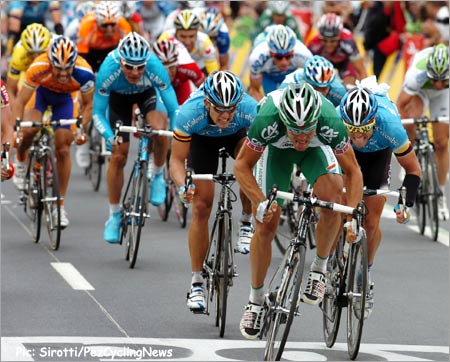 The last time that a Frenchman had won the 2nd stage of the Tour was WAY back in 1984, could one of the four Frenchmen write their name into the history books today? Well, no was the answer as Caisse d’Epargne along with the help of the sprinters’ teams took control bringing back three of the French quartet with just 2.5kms remaining. Sylvain Chavanel had attacked the others just 1km earlier and he gave it his all to take the glory solo but was caught with 1.4km to go. 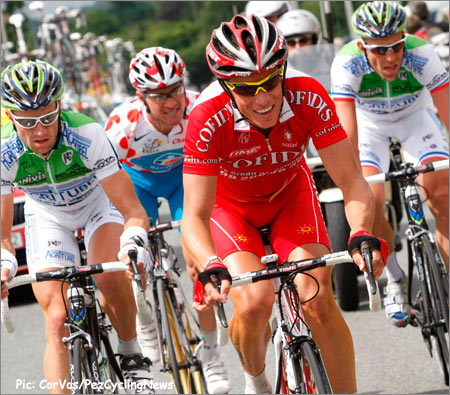 The stage was now set for a sprint royale with Robbie Mac, Zabel, Steegmans, Hushovd, Cavendish and co. all gathering at the front of the peloton to contest the first ‘real’ sprint of the Tour 08. The sprinters were almost upset by another classic attack by Fabian Cancellara (CSC) who shot out of the peloton like a rocket at the 1km to go banner, but it wasn’t to be for Spartacus today as he was swamped with 400m remaining.

Mark Renshaw (Credit Agricole) then provided Thor Hushovd with a perfect leadout which he capitalised on beautifully to take the win over the Team Columbia duo of Kim Kirchen and Gerald Ciolek. The big Norwegian certainly put on a great display of sprinting power, clearly justifying his status as favorite for the green jersey this year. 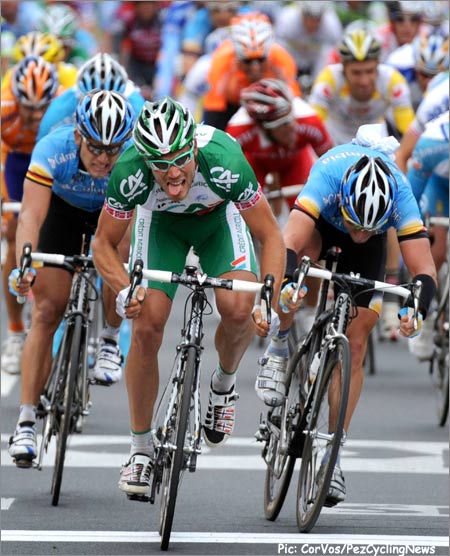 Mighty Thor put his hammer down on the tough uphill finish.

In the race for the yellow jersey there were no major changes in the GC with all the favorites still within reaching distance of Valverde’s yellow jersey, except for yesterday’s big loser, Mauricio Soler (Barloworld) who lost even more time on the run into the finish today (due to a broken bone from yesterday). All that Soler can hope for now is that his motivation, injured wrist and his luck improve before the mountains arrive on Stage 6.

Carmichael Sez: The Impact of Wind