Race Report “Now’s the day and now’s the hour!” This is the day that we find out who will win the 2008 Tour de France, three weeks of surprises and a few disappointments have come down to a 53 kilometer test against the clock. There are six riders within five minutes of the yellow jersey. The present wearer, Carlos Sastre, has a small lead, but is it enough for him to take the yellow to Paris?

The course is slightly undulating over the 53 kilometers from Cйrilly to Saint Amand Montrond, this should suit the bigger, stronger riders, which is not good news for Carlos Sastre, and he has a lead on Cadel Evans of 1 minute, 34 seconds and 2 minutes, 39 seconds over Denis Menchov. Frank Schleck, CSC team mate of Sastre is not known for his time trialing strengths and Bernhard Kohl (Gerolsteiner) is a dark horse, but could pull off a surprise. Vande Velde, Valverde and Sammy Sanchez would have to ride like ten men to upset the apple cart. 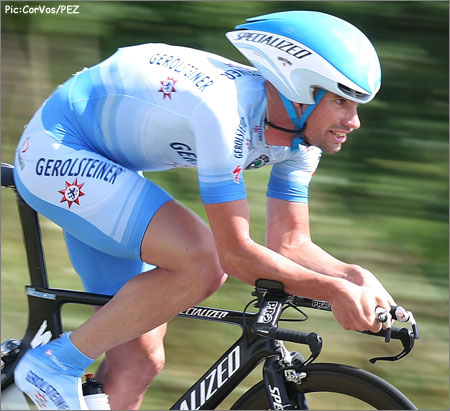 The Podium Battle
First of the contenders was Samuel Sanchez (Euskaltel), he has an outside chance of moving up into the first five, but he would have to have a very good day for that. Alejandro Valverde (Caisse d’Epargne) kicked out of the start gate three minutes after his countryman; Valverde can ride well against the clock, but on occasions can’t perform when needed. Possible winner of the stage; Christian Vande Velde (Garmin) is next up, the long legged American looks serious and will want to get either the stage or possibly into the top five, he has more chance that either of the Spanish riders. 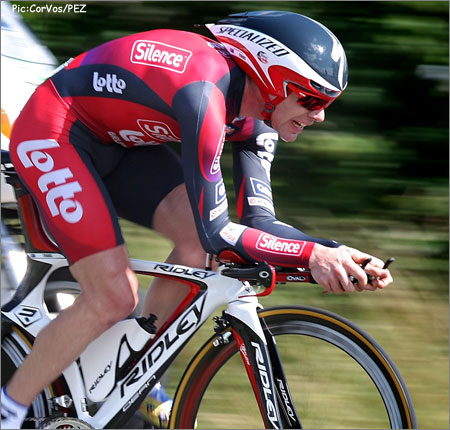 Denis Menchov (Rabobank) and Cadel Evans (Silence) start without any problems, unlike Bernhard Kohl (Gerolsteiner) who crashes before he starts by falling of the ramp up to the sign on; he seems to have hurt his elbow. Frank Schleck and the yellow jersey wearing Carlos Sastre (CSC) both head off to consolidate their positions; it’s all or nothing now! 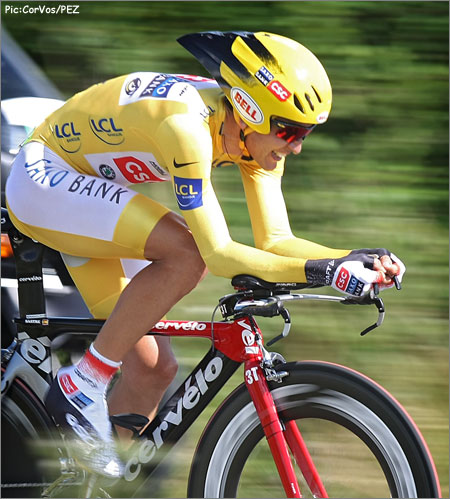 Out on the Course
Evans takes a fast curve through the forest without changing from his aerodynamic position, where as Menchov is more fighting his bike, Sastre still looks calm.

Things were not going Cadel Evans way as he was 4 seconds down on Kohl and only 8 seconds up on Sastre, and at this point it was looking like Menchov was going to be the biggest danger for everyone.

Menchov had slowed slightly over the second section as has Kohl, but Evans is still 3 seconds behind the Austrian and only needs to beat him by 2 seconds to move past him on the overall. Frank Schleck is riding off the podium and a top five place. Evans is not doing enough to take the yellow jersey as he has only taken 23 seconds back from Sastre. Carlos catches Frank on the run in; this show CSC had the right idea of sending Sastre up the road at L’Alpe D’Huez. 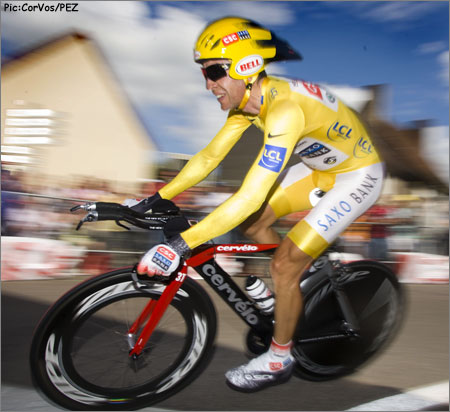 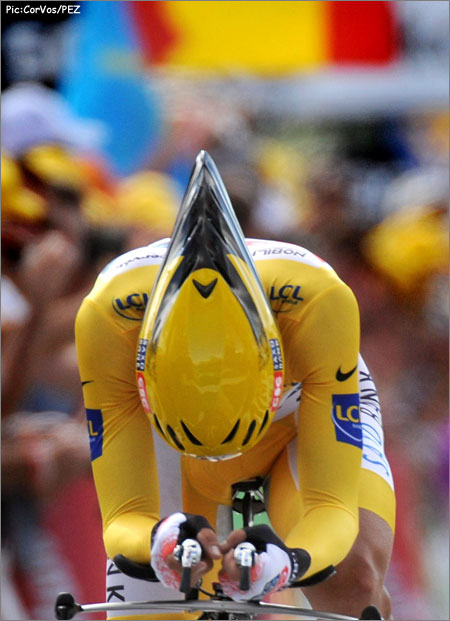 At the finish all of the riders were pushing it to the limit, but Evans didn’t seem to have managed to put all his effort into the test, he is fast, but should have been better and it looks like he has lost the 2008 Tour, he will get on the podium in second position overall for the second year to a Spanish winner. Maybe he will try to attack next year? 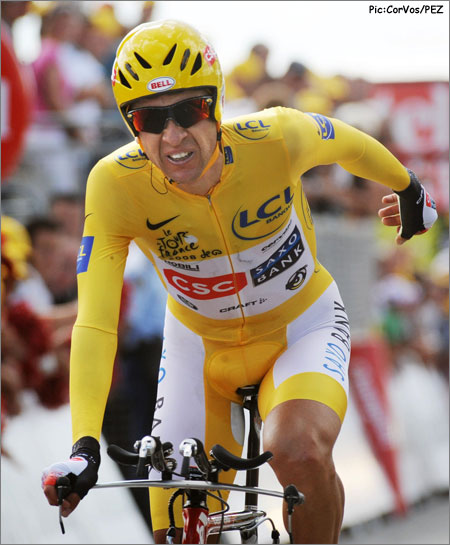 Earlier in the day
The first rider off was at 18 minutes after 11, Bernhard Eisel of the Columbia team, we were not expecting any fireworks until later, maybe Stuart O’Grady (CSC) at 12.22 or Adam Hansen (Columbia) at 12.30 or David Millar (Garmin) at 13.52 and world TT champ; Fabian Cancellara (CSC) off 2 minutes behind Millar. The top ten will not roll down that start ramp until 4 o’clock with a three minute gap between each of the top 20 riders. 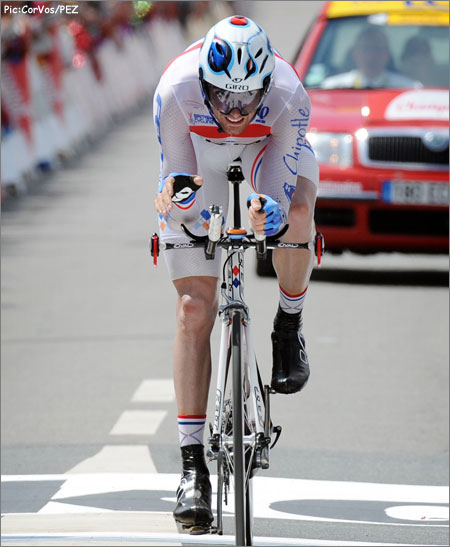 Bernhard Eisel (Columbia) was first on the leader board with a time of 1 hour, 13 minutes, 12 seconds; this for sure didn’t last long. Soon Leif Hoste (Silence-Lotto) was the best rider with a time of 1.07.40, nearly 47 kph, this stayed at the top of the leader board until a list of riders bested his time, first Rosseler (Quick Step), then Pate (Garmin), then Lang (Gerolsteiner), Millar (Garmin) and then world champ; Fabian Cancellara (CSC) with a time of 1.4.11. Stefan Schumacher (Gerolsteiner) who won the earlier time trial gave it his best shot, he was second at the intermediate time checks, then moved into fastest at the last and at the finish with a time of 1.3.50. But in the end it’s not very important in the BIG picture of this Tour. 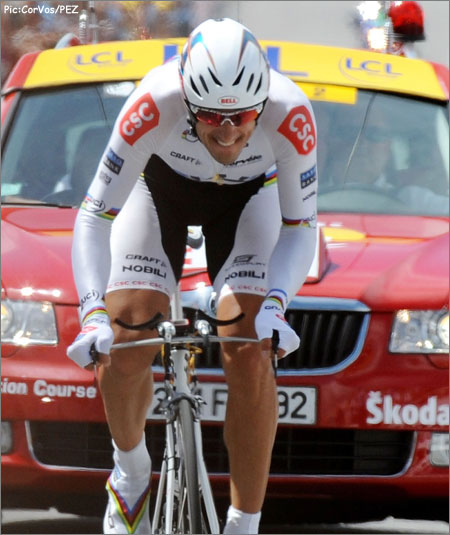 After Cancellara finished he was mobbed by journalists, he said “I feel great today and when I feel like this I can ride very fast” he also thought that Sastre would have a hard time; how right he was, but he did it!

The Power of Yellow
There we have it, Carlos Sastre will ride into Paris tomorrow with the yellow jersey, and many people didn’t think he would hold off the Australian, Cadel Evans, but as we all know that with the magic jersey on your shoulders a rider can do things he has only dreamt of. 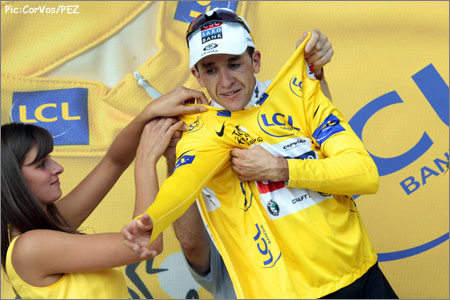 Andy Schleck kept his white jersey, Frank lost his podium place, Kohl is on the podium with the Mountains jersey and third overall, Vande Velde moved into fifth place and Valverde disappeared off the board. Importantly Schumacher showed it wasn’t a flash in the pan win at the first time trial. It was a happy Carlos Sastre that accepted the yellow jersey, relieved, for sure! 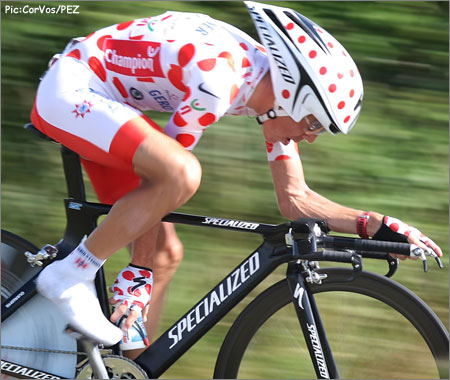