Race Report: Sastre way, uh-huh, uh-huh, I like it, uh-huh, uh-huh! Yep, it’s party time and the sun is shining pretty damn brightly over the CSC-Saxo Bank bus right now. Carlos Sastre finally nails the biggest prize of them all – a lovely yellow jersey is safely added to the Danish squad’s many-hued collection ….

Not too much in the way of suspense this afternoon with all the classifications being sorted out after the time trial 24 hours ago. It was obligatory photo time as the knackered peloton trundled out of Йtampes en route for the Champs Йlysйes … the only question was how the hell are they going to fit all of the CSC jersey collection in? Yellow, white, all the national champions’ kits. It’s quite a show for the best team in the race.

Once the riders were rolling … very slowly … Stephane Auge and little Sammy Dumoulin swapped head gear with the moto guys to comic effect. Christian Prudhomme had his official starter’s flag nicked out of his hands. Sastre and chums rode along quaffing champagne like 18th century aristocrats … school’s nearly out and the teachers are relaxing the rules a bit. 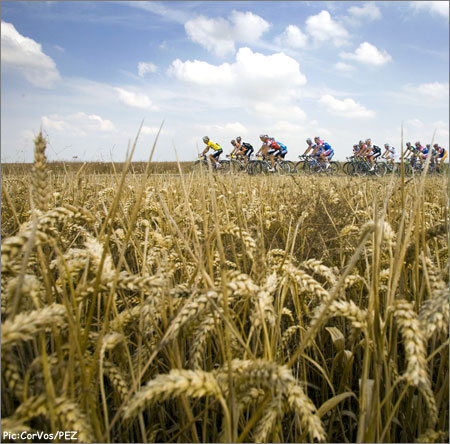 It was a pleasant ride into ‘town’ today. Then they went fast.

It was all a pretty relaxed Sunday afternoon club ride until the peloton grudgingly remembered there was a race to be run and turned the dial from ‘pedestrian’ to ‘screamin’ fast’.

The sun came blazing down to illuminate the last day of the biggest annual sporting show on the planet, and the fans came out in full force to support the riders. Problems early on or not, thanks to Mr Ricco and friends, the Tour makes up one element of French national DNA and the people still live and love every minute. 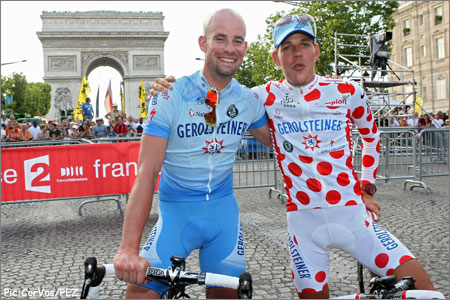 Could Gerolsteiner possibly hope for a better swan song? Two stages, Yellow for a day, Dots in Paris, and Third Overall.

We had a couple of innocuous fourth-category climbs on the route, but nothing that would worry Gerolsteiner’s Bernard Kohl in his polka-dot kit. The Cote de Saint-Remy-les-Chevreuse and the Cote de Chateaufort provided two rapid fire slaps to the chops at kilometres 48 and 51, just to remind the riders they were in a race.

Bernhard Eisel gave Bernard Kohl a shove over the line for the first summit, ahead of that well-known mountain goat Gert Steegmans, while Agritubel’s Freddy Bichot took the final climb of the Tour 2008. 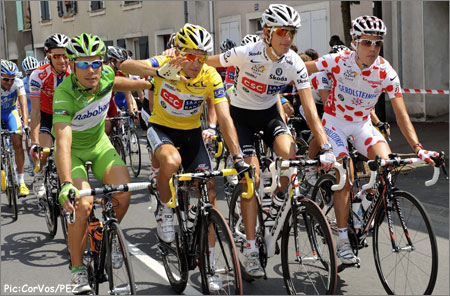 First over the line in the sprints on laps two and five: Ivan Gutierrez of Caisse d’ Epargne ahead of Bouyges Telecom’s Xavier Florencio; Carlos Barredo of QuickStep and Agritubel’s Nicolas Vogondy took the main points in the second as a short-lived breakaway fizzled. 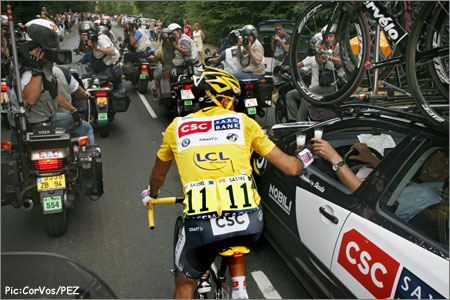 Carlos Sastre was, of course, the man of the day, and had a few cameras following his every move…including the champagne toast.

Also flying their colors off the front were Stefan Schumacher, Laurent Lefevre, Stephane Auge, Alex Botcharov and Konstantin Siutsou. There was really only going to be one outcome today though: a full-on cavalry charge up and down the finishing circuit and a mass sprint. 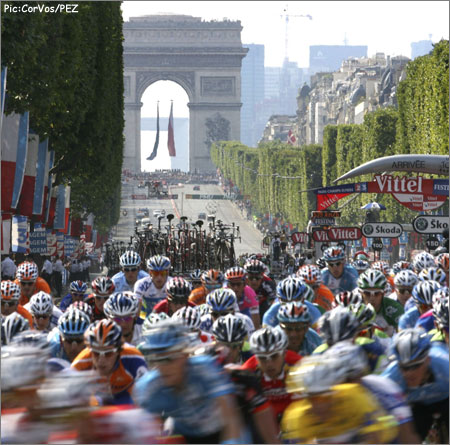 When they reached the Champs, we were all treated to the world’s biggest crit…it never gets old.

Arnaud Gerard from Francaise des Jeux gave it some stick and tried to rewrite the script, leading the peloton by a fistful of seconds through the bell. It always looks cool as a lone rider tries to hold off the bunch when he corners up by the Arc de Triomphe – a mad scramble of photographers firing as the peloton slows to take the hairpin before throwing themselves down the right-hand side gutter. 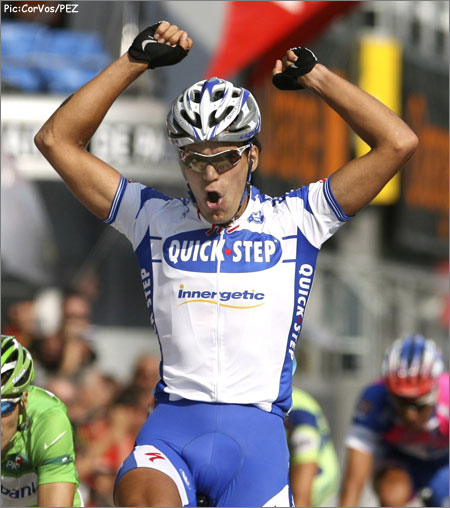 Steegmans came through big on the final day – to go along with his teammates’ wins in Wallonie: Boonen yesterday, Bettini today.

Three kms to go, and ….. what’s this?? QuickStep on the front! Desperation stakes for the erstwhile Belgian super team who’ve had a miserable Tour. One guy that should have been here won a bunch sprint in the Tour of Wallonia yesterday … Tom something, forget the surname now.

Gerard has been swept up and dealt with before Sylvain Chavanel makes sure of his ‘most aggressive rider’ award with a last gasp burst. But QuickStep get it right for once in the race, just. They launch round the final corner, Steegmans goes early and holds off Ciolek who finishes like a TGV. 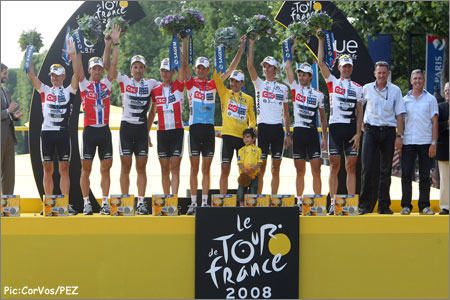 Without a doubt the best team at this year’s Tour: CSC.

Sastre cruises home embraced by his mates O’Grady and the Schlecks, before he rides into the arms of his wife and kids. The overall gaps closed up a little due to a minor split in the peloton but it made no difference to the final placings. 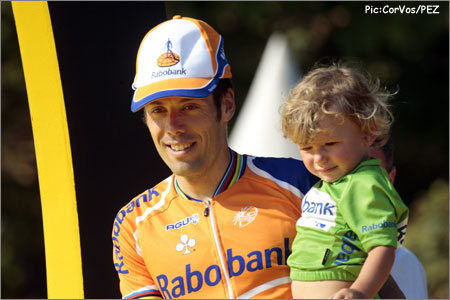 Oscarito can add this to his impressive showcase of cycling accomplishments.

Everyone looked pretty happy on the podium. Freire looks particularly chuffed to add a green jersey to his impressive record. Kohl looked slightly overwhelmed at being congratulated by Hinault after winning the dots. Andy Schleck looked like ….. he’ll be wearing a different colored jersey up there in a year or two.

Sastre had the kids with him, his son brandishing the Credit Lyonnais lion with particular exuberance. it’s a massive win for the Spaniard and for Bjarne Riis’s CSC-Saxo bank outfit. At last, they’ve married tactical astuteness and aggression to come up with the big prize. 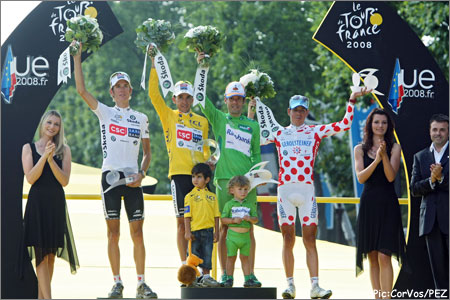 In second place, regardless of what you feel about Cadel Evans, you’ve got to be at least a little sympathetic. Some of the hiring and firing that went on since last summer has back-fired pretty dramatically on Silence-Lotto. Popovych just didn’t perform: in fact, the one day he wasn’t trailing Evans he was so far up the road, he was precisely zero help to his chief.

I wonder what Chris Horner makes of all this, cooling his heels at Astana right now? Evans desperately wanted to keep a guy who always seemed to ride with his heart in the right place. 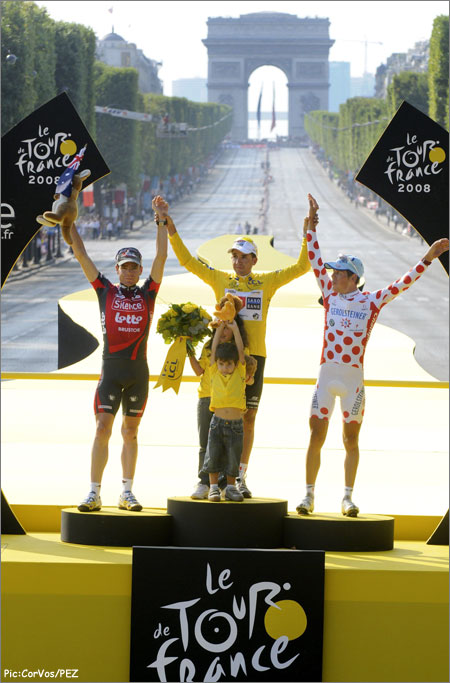 Next year, we hear that (CSC) Saxo Bank will be back with Andy Schleck’s full-on tilt at the title; Contador should be getting a return invite in the post … maybe Evans has got one more realistic shot at yellow before the years catch him up.