The first two Category 1 mountains of the Tour de France were the battlegrounds of today’s stage and what a stage it was. Attacks, crashes and mountains are always a good mix for the spectators, but not such a good mix for most of the riders as they battled over storied Peyresourde and Col d’Aspin. 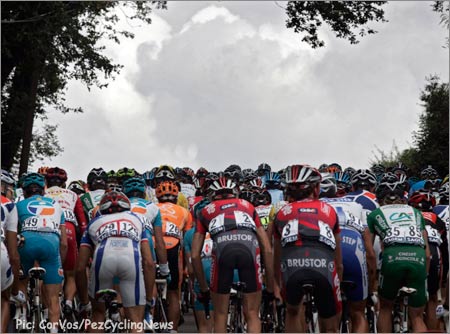 Into the clouds: today’s first day in the ‘Haute-Pyrenees’ saw little change on gc, but still had plenty of action.

Rolling out on this morning’s 224km stage, the attacks started in earnest from kilometer zero but it wasn’t until 22kms into the race that the day’s break got clear with Aleksandr Kuschynski (Liquigas), Sebastian Lang (Gerolsteiner) and Nicolas Jalabert (Agritubel) making an acceptable group for the peloton to let go. This trio quickly built up a maximum lead of 14 minutes before the peloton began their chase.

With Euskatel chasing on the front of the peloton for a possible Sammy Sanchez victory, the bunch was strung out on a seemingly simple, small descent when suddenly Cadel Evans crashed! It was a slight, innocuous left hand corner when the number one favorite for the Tour went down. Panic stations set in at Silence-Lotto with the entire team stopping for Cadel, who was clearly shaken by the incident which seemed to be fairly serious judging by the state of his jersey – completely ripped open the entire length of his back, his shorts ripped open on his left thigh along with some small wounds on his left shoulder, knee, elbow and wrist. Cadel appeared calm though and was quickly back on his bike and chased back into the peloton aided by his Silence-Lotto team mates – including McEwen!

Onto The Peyresourde
One bike change and a rolling visit to the doctor’s car later and Cadel was safely back into his position in the first 20 riders in the peloton as they began to tackle the first big Cat 1 climb, the Col de Peyresourde (1569m). On the climb itself the three breakaways broke apart with Lang leaving the others behind to crest the climb alone 35s ahead of Kuschynski and 3m30s ahead of Jalabert.

Back in the peloton all was calm with the pace being controlled by Euskatel until just before the crest when current KOM champion, David de la Fuente (Saunier Duval-Scott) and Maxime Monfort (Cofidis) attacked to fight for the final mountain points. De la Fuente took the fourth place points to keep control of his jersey for another day whilst the big names of Kirchen, Valverde, Evans and Menchov all crested the col together knowing that the next big climb of the Col d’Aspin (1489m) was where the real action would take place. 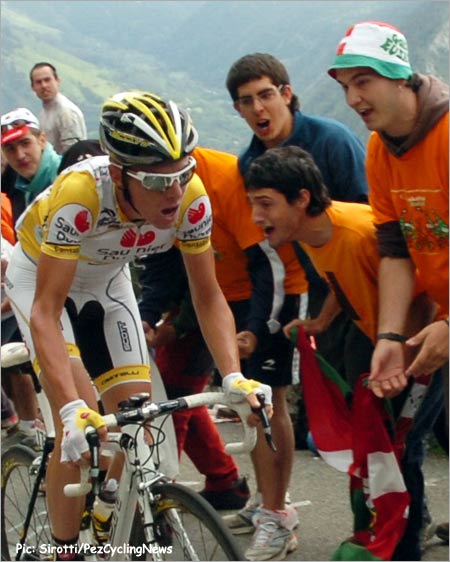 Ricardo Ricco launched a ferocious attack that no one dared follow.

Starting the Aspin, Sebastien Lang still had a 6 minute lead over the peloton and a 5 minute lead over the counter attacking group of De la Fuente, Monfort, Jalabert and Sanchez (Caisse d’Epargne) but it would be a tough ask for the German time trial specialist to hang on.

In the peloton itself the fireworks began early on the climb with Schumacher (Gerolsteiner) the first to attack, quickly followed by the Italian Saunier Duval duo of Pieopli and Ricco, before they were brought back by Silence-Lotto. There was then a flurry of attacks by seemingly everybody but the favorites with riders like Casar, Efimkin, Bruseghin & Nibali all amongst the action thinking they could outclimb the favorites. 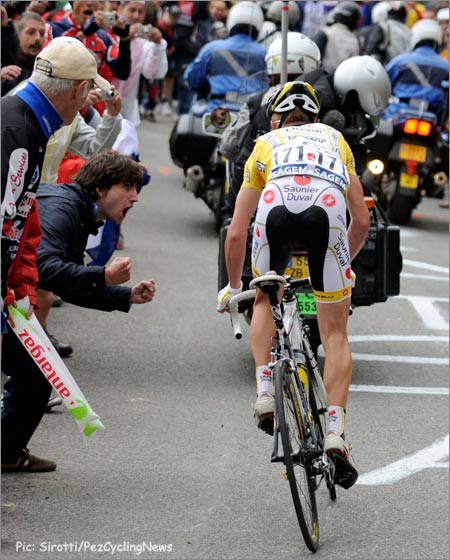 The Cobra didn’t even bother to say goodbye, let alone send a postcard.

The organisation by Caisse d’Epargne and Silence-Lotto was poor, seemingly their two leaders Valverde and Evans weren’t on a good day, yellow jersey holder Kirchen (Columbia) wasn’t looking good either and it was at this moment that Ricardo Ricco attacked again and showed the whole peloton exactly how to climb. The Cobra flew past the early attackers like they were standing still as he set off on his lone effort to catch Sebastien Lang who was still 3 minutes ahead with 30km to go until the finish, 25 of which were downhill. Ricco didn’t need the downhill to catch Lang though, flying past the tiring German with just 1km still to climb on the Aspin and cresting the Col 1m25s ahead of the peloton which still included all the main favorites.

Despite the small peloton of favorites pulling behind, Ricco flew down the backside of the Aspin and turned over his biggest gear like chromo-man, riding solo all the way for the stage win, 1m03s ahead of late attacker Vladimir Efimkin (ag2r) and 1m17s over the peloton. 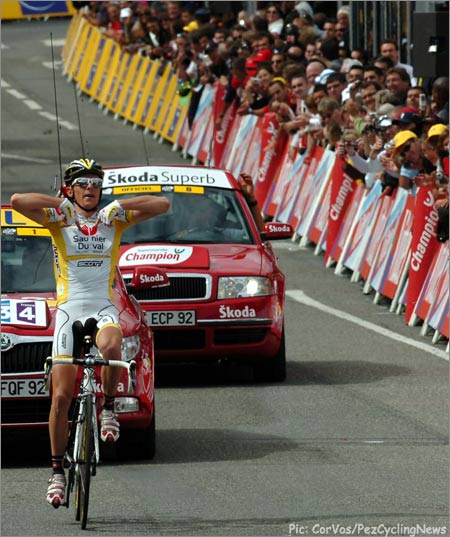 No major changes in the overall with only Millar and Lovkist being the day’s losers, both dropping out of the top 10. The white jersey of best young rider is now on the shoulders of Andy Schleck, whilst Kim Kirchen has retaken the green jersey from Oscar Freire although Freire will wear it again tomorrow with Kirchen in yellow. Garmin-Chipotle’s Christian Vende Velde was right there with the gc boys and moved up to 3rd overall – very nice riding by the American (who’s also one of the nicest guys in the bunch – ed.)

With the favorites seemingly suffering today, Ricco climbing like his idol Marco Pantani and the first two HC mountains of the Tour in the stage tomorrow, what can we expect at tomorrow’s killer day over the Tourmalet and summit finish at Hautacam? Keep it tuned to Pez for all the latest!