Roadside St.3: It’s not just the 20 teams of nine riders who make the Tour. It’s all the other teams that contribute to making up the spectacle, and one of the biggest parts of that is the caravan publicitaire. Today, I got the chance to find out a little more.

I was enjoying a saunter around Saint Malo’s spectacular sea defences last night when I got a call from Pascal Orsini, a long time friend of PezCycling News. Pascal is the man running the Festina online blog to give fans a taste of life on the road and after the show’s over. He’d arranged to give me a little tour of the caravan, explaining what he does, and giving me some mind-boggling facts and figures. 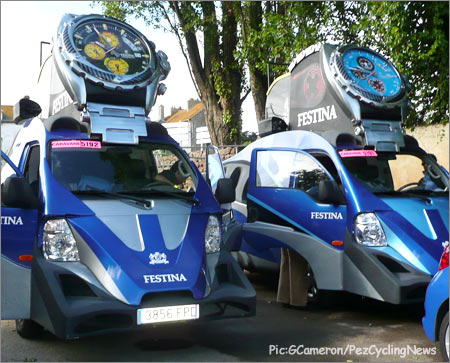 But first, last night …… Saint Malo is a beautiful sea port, with a hallucinogenic one-way traffic system. This is a town designed long before modern traffic was a consideration. I thought my Sat-Nav was having some sort of psychotic episode. “Turn right in 50 metres. Now turn left. Now turn right. Now turn left! Now turn right! Right! Right!!” 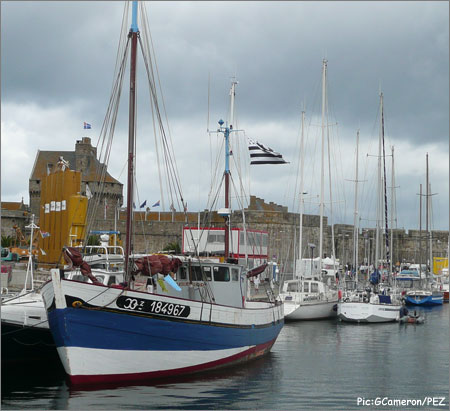 Between us we found both a) the hotel; and b) even more miraculously, a parking space. Then it was out for crиme de poisson maison followed by skate in gherkin sauce at Restaurant Porte St Pierre, washed down with a cheeky little Breton cider, which is practically the regional drink. 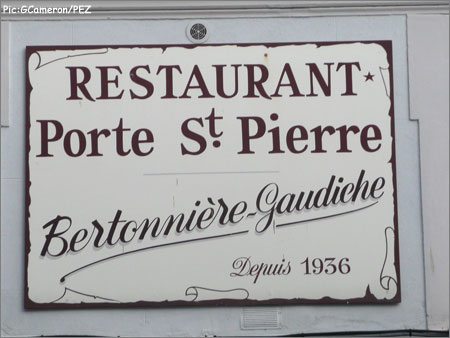 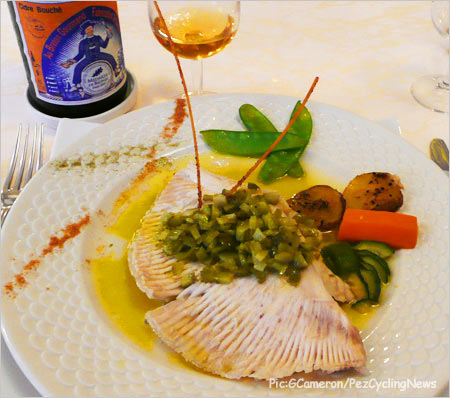 I finally hooked up with Pascal after a sprint out from the press parking area to the Saint Malo Hippodrome where the caravan was parked up ahead of the day’s festivities. Pascal talked me through the ‘typical’ day, if there’s ever such a thing on Le Tour! 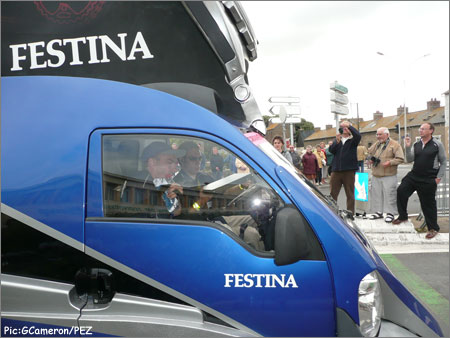 Pascal making a living in the Festina ‘car.’

“Today was a little different because we were able to stay near the start. Sometimes we have to drive up to 100 or even 200km to get to the start town, because the hotels nearby are booked by the officials and the riders. That is really tiring.”

“We’re up by 6am or 7am then we have to get to the caravan parking, clean the vehicles, put flags on, check the ‘goodies’ that we give out. On the course of the Tour, we think the caravan will distribute as many as 12 million items and see that many fans!” 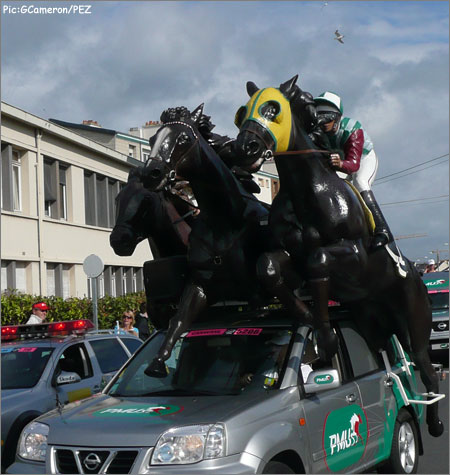 “Then we check the sound system for communicating with the directors of the caravan. We have walkie talkies to communicate within the team.

“There’s 15 of us in total. We’re maybe a middle-sized team here. Festina gives around 2-3million Euros in sponsorship to the Tour. A company like Le Credit Lyonnais contributes around 10 million Euros and they will have maybe 30 to 40 staff on Tour.” 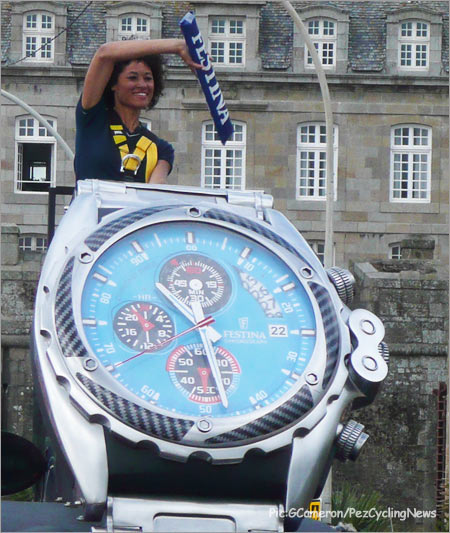 The boss Jeremy drives the lead car. There are two girls handling client and customer liaison in the start village, plus the other drivers and caravan girls (two to each car) who are harnessed into their podiums on top of the cars. 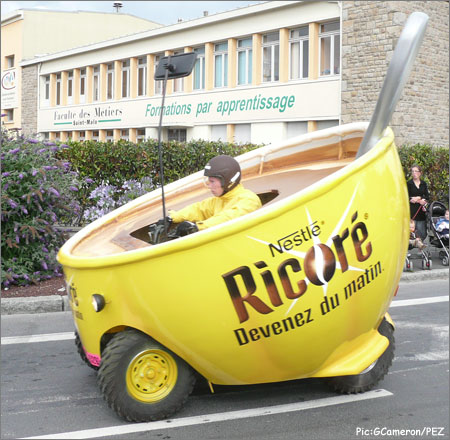 These girls have to ‘animate’ things, and it ain’t easy in weather like we’ve had so far. Pascal said they almost froze yesterday. And next week they could have a whole different problem if the heat arrives.

Pascal said: “It’s a tough job, being positive all the time. Sometimes in the mountains the people have been waiting and partying for two days, and some, not many, throw beer at the girls.” 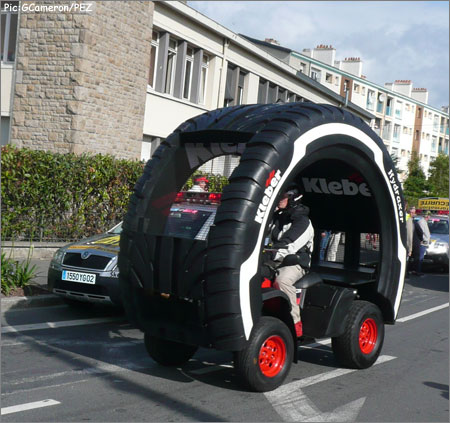 The distribution of goodies only takes place on the move, and benefits from speed regulation to a max of 80kms/h. If the cars are going too fast, anything thrown out tends to bounce back into the road, which is a major danger for grabbing young hands. 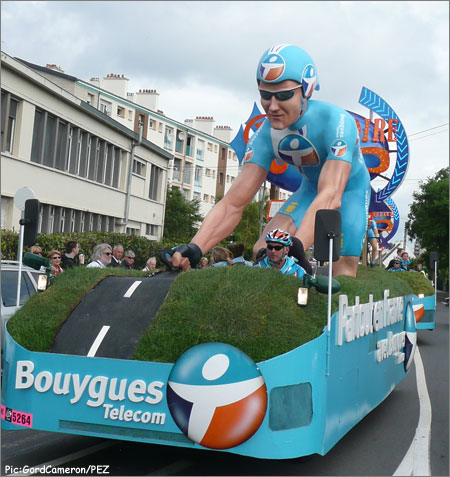 It’s not all dangerous, though. Safety is paramount and the cars are checked each day. Jean-Louis, pictured on duty at the roadside (below), keeps things under control at the start. Out on the road, gendarmes make sure the cars are in the correct order, and will guide any back that have stopped for a natural break! 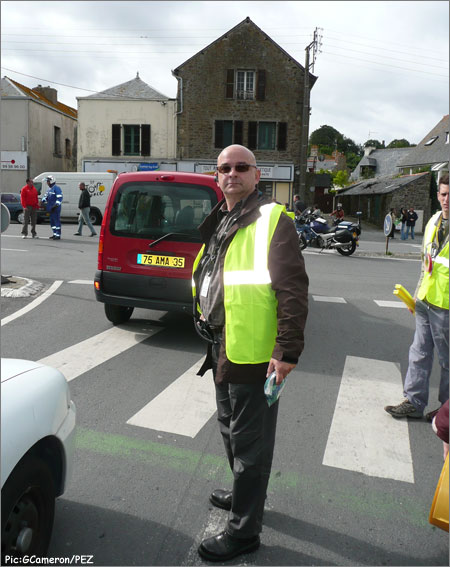 Festina is easy to spot, but you have to wait for them … they occupy the last spot in the caravan, in their capacity as official chronometers of the Tour. Bringing up the rear is a transporter truck, the mechanical version of the racers’ broomwagon. 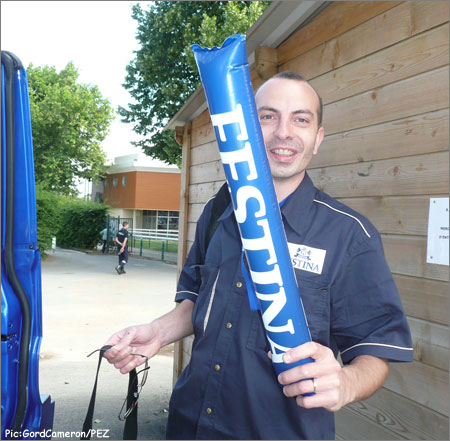 PEZ-Man in the Publicitaire: Pascal Orsini.

And what does Pascal think about it? “It’s a good job, but hard work. I am enjoying it so much though. I have been photographing the caravan since 1989, so I have lived it as a fan, and now I’m working here. It’s like a dream. It’s my first time with Festina, but I’ve been with Skoda before.” 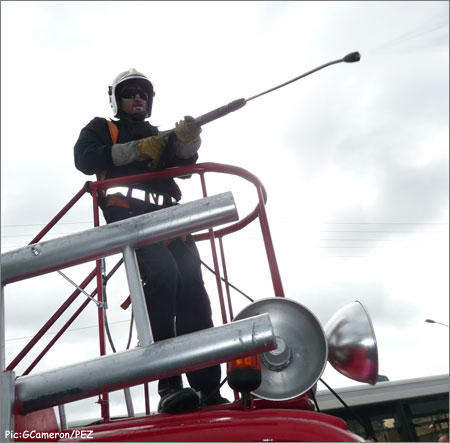 “It’s a bit like being on a team of riders. You have to look after each other and you share the same experiences. Most of the time, the contact with the public is good as Festina is a popular company, and people still love Richard Virenque. There are people who shout at us that the watches on top of the cars are too slow or too fast. It’s the same joke all over France, just with changing accents! But sometimes we get nasty things shouted because of what happened with the team in 1998.”

The cars are fairly unique, and an acquired taste if you love classic marques, but you can’t ignore them. Many aren’t street legal under normal circumstances, such as the Ricore car, so they have to be taken up on trailers at night. 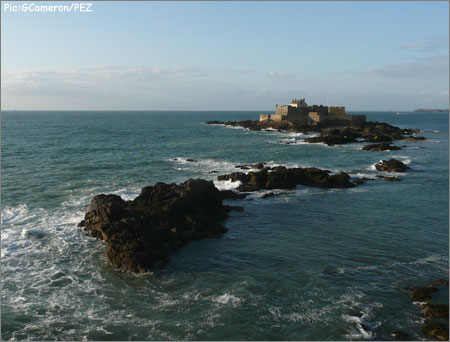 All very different from when Henri Desgrange started up the caravan as a revenue stream when he basically booted out the cycle manufacturers, and with them, their money, back in the late 1920s’. 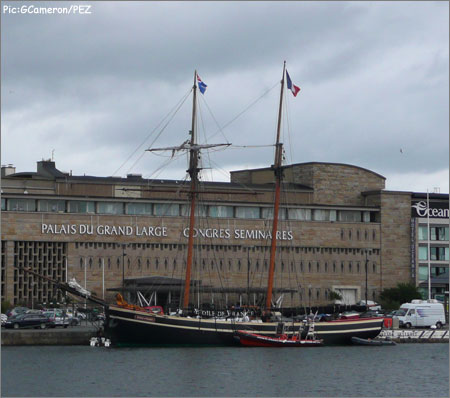 Since the 1990’s the show has increased dramatically and now lasts 45 minutes going by and includes around 400 vehicles. That’s a lot of horsepower, and a lot of selling power! And there is a competition between the teams to see who can do the best … but it’s all friendly. 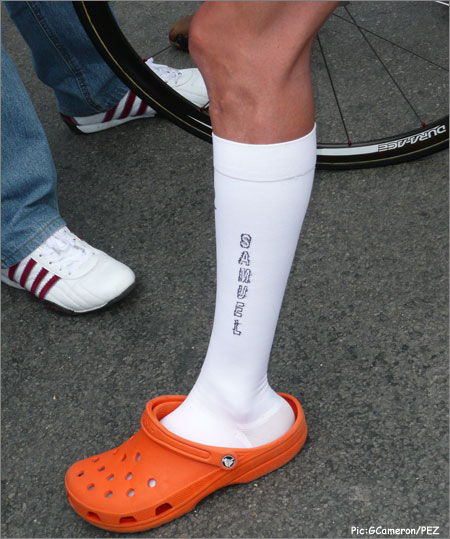 With that Pascal had to jump into the car and set off, but I thanked him for taking the time. Then I wandered down to the start village to check out Sammy Sanchez’s rather intriguing new ‘race wear’, and spotted that Fabian Wegmann needs his sponsors to make him an updated pair of shoes! 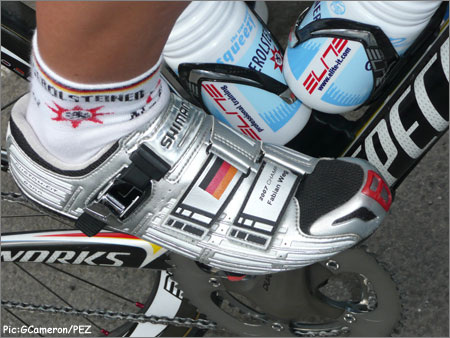 That’s all for now, but tomorrow is TT day so I’ll be seeing what I can come up with down in Cholet. Au revoir et Vive le Tour!
– Gord