At 52 kilometres into the stage, having passed hundreds of Gendarmes and officials, Jean-Paul Loris from ASO throws himself into the road in front of us; “stop, stop, you have the wrong stickers, orange, not blue, you stop now!” 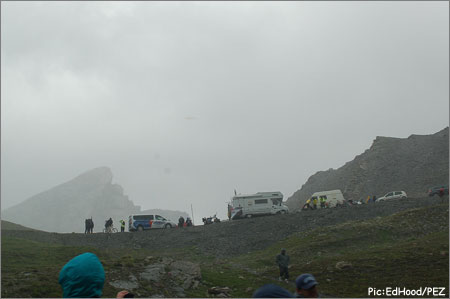 We were desperate for a pizza last night; but the Vietnamese restaurant in Laragne was cool. 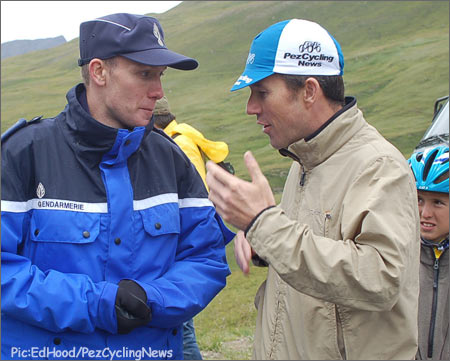 Martin pleads his case with the local gendarme while the lad just laughs.

At breakfast there was French accordion music on the stereo, to get us in the mood for our first ‘real’ day on the race, it almost made us forget how bad the coffee was.

We picked up L’Equipe en route to the start; “Cavendish quitte le Tour” said the one headline – expected, and he’ll have more glory days to come. But another said; “Barloworld quitte le cyclisme” – terrible news. 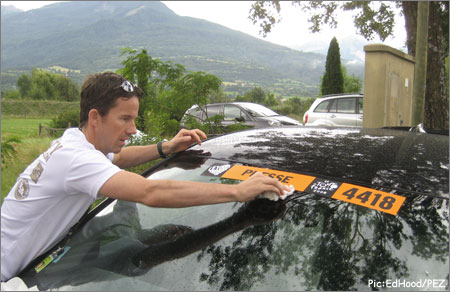 Credentials; the nightmare continued; “we have your badges, but no car stickers!” but once we got hold of ASO’s Stephanie and Dominik, things were sorted out and we had those precious pieces of plastic and strips of vinyl for the Volvo; that’s what we thought, anyway! 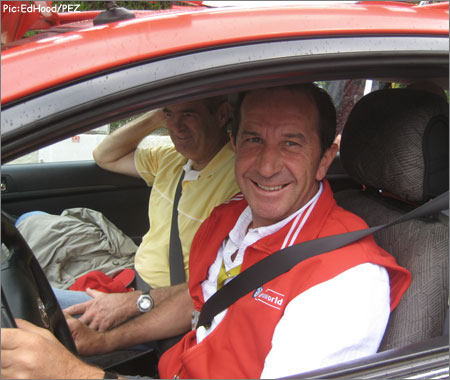 “Ca va, Claudio?” Corti managed a smile and a hand shake, despite his woes, and then it was time to go.

It was raining when we left Embrun, sodden A class roads eased gently up the Alpine valleys, but all around the Alpes rear, jagged and grey.

This is the Route des Grandes Alpes – encouraging for the sprinters!

At 32 K there’s the first hairpins and it’s not far to Italia – and the serious climbing.

The Col d’Agnel – the third highest tarmaced pass in Europe, it’s not the steepest, but it’s long, long, long.

At 43 K, well into the climb, the skies open, just as we spot former British pro champion, Tim Harris – he drives VIP’s for Skoda these days; “with this weather it’s going to be a very hard stage, it’ll be freezing coming down of this col, then they have that climb to Prato, it could be snowing up there!”
Cheers Tim!

The scenery is ever more rugged, the higher we climb, the rain comes and goes, but the sky is angry and there are patches of snow still on the mountainsides. 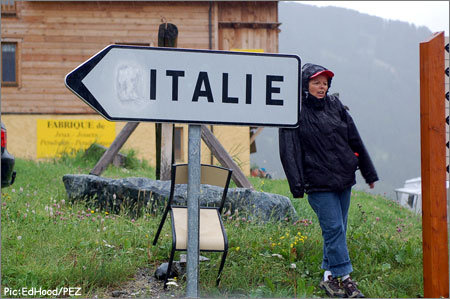 It’s blowing a gale now, but it’s a tail wind, that’s something, at least – and then we met Jean-Paul

It’s plan ‘B’ now, watch the race and take it from there; “plans have to be flexible, when you’re a journalist.” 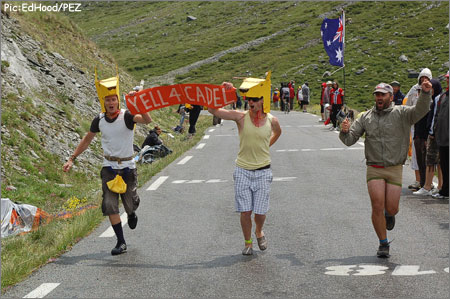 Three distinctly dodgy kangaroos are on our patch; “yell for Cadel!” they implore all and sundry as they hop around, high on red wine.

It’s cold and windy as we await the race, more like the Scottish Hill Climb Championship in October than le Tour in July. Meanwhile, the cop keeps a weathered eye on us to ensure we don’t do a runner. 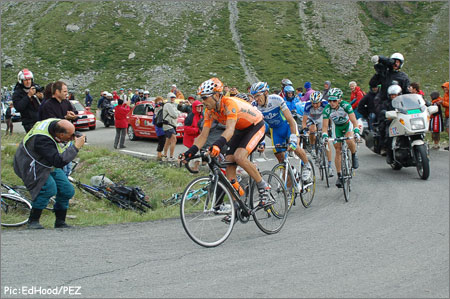 It’s bitterly cold as a group of four remind us that this is a bike race and there’s a stage to be fought for. Simon Gerrans (CA), Egoi Martinez (Euskaltel), Jose Luis Arrieta (AG2R) and a Garmin, whose number we miss, but turns out to be Danny Pate.

The gap is huge, ten minutes plus back to the peloton, which we can see winding up the valley floor below us, like a colourful furry caterpillar. Lampre ride tempo, Cunego must get a stage win from this race, he sacrificed the Giro for it; maybe today is the day. The further back the bunch, the more pain there is in the faces.

Robbie McEwen is off the back; “get out the f***ing way!” he yells at a motorcycle camera. 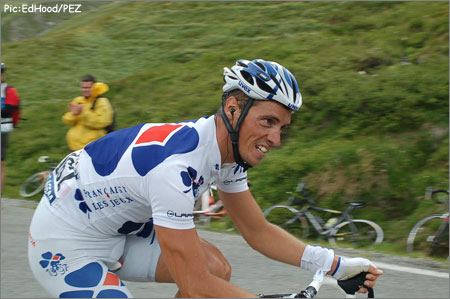 A Francaise des Jeux is last on the road, Sebastien Chavanel, his face shows desperation. He knows that if he let’s the gap get too big, he won’t make it back on the descent and there are 60 fast kilometres from the bottom to the start of the final climb.

We jump on to the tail of the race convoy as soon as the break down truck passes; if we let a gap open, then fans on bikes and cars will fill the spaces and we’ll get snarled up. We’ll have to sort out those damn credentials again at the finish today and we’ll need all the time we can get.

At the summit the wind is gale force and it’s hailing, I open the Volvo window to take a pic and it’s like someone is throwing gravel in my face.

The descent is wild, maniacs on mountain bikes infiltrate the convoy as we drop down, down, down at crazy speeds on the slick, wet tar.

On a right hand hairpin, the traffic suddenly tails back and stops in front of us, the smell of frying disc pads fills the air.

Caisse D’Epargne rider and former Tour winner, Oscar Pereiro is the victim; he’s gone over the edge of the hairpin and landed on the road, maybe five metres below, he’s lying prone, with a medical team around him.

There’s movement in his face and hands, thank God, but it doesn’t look good.
I’m not entirely comfortable with what I’m doing, but I start to take pictures.
This is horrendous, but it’s part of le Tour and our readers have to see what a dangerous sport this really is.

The motor bike camera guys have no such ethical dilemmas, one tries to push me out of the way, another tramples on my toes. Click, click, click, click, their five thousand euro cameras rattle off hundreds of shots.

The medical team are oblivious; they have a neck collar on the rider, a vital signs monitor on his arm and a nurse carefully holds the plasma bag from which a drip leads into his tanned and badly grazed arm. There’s grace in her movements as she allows everyone to work around her, moving this way and that as bandages are applied and a pulse is taken at the wrist and neck.

They ease him on to a flexible stretcher before getting him on a rigid stretcher and sliding it in to the back of the ambulance.

Back on the road, the blue lights of the ambulance flash, a few cars ahead as we realize that having the wrong stickers on the car isn’t that big a deal.

The roads are dry now and it’s 20 degrees, it was around freezing, with the wind chill, at the top.

We’re a bit subdued in the car, we just hope Oscar will be OK, that’s the worst crash I’ve ever seen.

The second hot spot, there’s still 70 K to go, although we don’t know how far ahead the race is, we think it would be bad form to pass the ambulance.

The roads are pan flat now, we’re on the flood plain of the river Stura di Monte; it reminds me of the opening phase of Milan – San Remo, across those endless plains.

Al emails from Espana to say that Pereiro has a broken wrist and collar bone – it looked worse than that to us, but let’s hope that’s all that’s wrong.

The mountain are rearing again, just ahead, as a few cars in front, the F des J car shepherds one of their riders; he must be way, way behind the peloton. We think it’s Chavanel who was last up the Agnel, he’s certainly got spirit, but we just can’t see him beating the time cut, despite his 40 kph average.

We’re on the second last climb of the day, Colle del Morte.

After a long, flat slog across the plains it rears up abruptly, straight and steeply. We have to stop for diesel fuel, but can imagine that Chavanel will be hurting up here.

By the time we get out of the gas station, the road is open and it’s chaos.

We start the climb to Prato Nevoso as the camper vans thunder down towards us. It’s a brute with steep ramps leading from one hairpin to the next.

Far above us, Gerrans wins and Schleck takes yellow.

The guy with the Luxembourg flags got it right and the alcoholic kangaroos got the stage winner right, at least; but maybe not enough folks; “yelled for Cadel.”

We’ve re-caught the tail end of the race, and Chavanel is still battling.

You know you’re in Italy when…

It’s crazy as fans on foot, on bikes, in cars, with prams even, try to get off the hill – meanwhile the pros have the same idea.Dario Cioni remonstrates with a couple of drunken fans who nearly deck him. And here’s McEwen, they better not have a go at him, or they’ll be on the deck!

Eventually we battle through to the top and it’s time to start work.