Stage 18 Start: The day after Sastre had the best day of his career, the question was; “did he do enough?” We braved the blazing sun at the stage start in Borg-D’Oisans to get the juice from those who know. 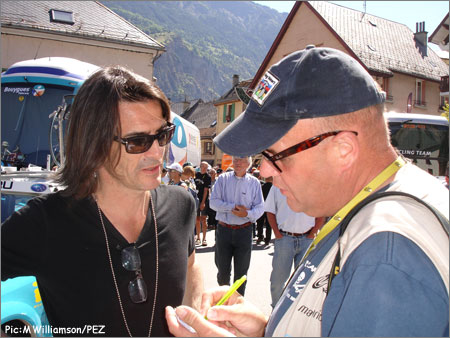 Philippe Brunel, journalistic legend who is ‘envoyй spйcial’ for L’Equipe: I really don’t know, I think it may be Evans; Sastre perhaps, but if that is to be, then Frank (Schleck) must attack today. For me it is an average Tour. If Evans wins he will do so without winning a stage, for a Tour to be great, the winner must impose himself upon the race and conquer it! 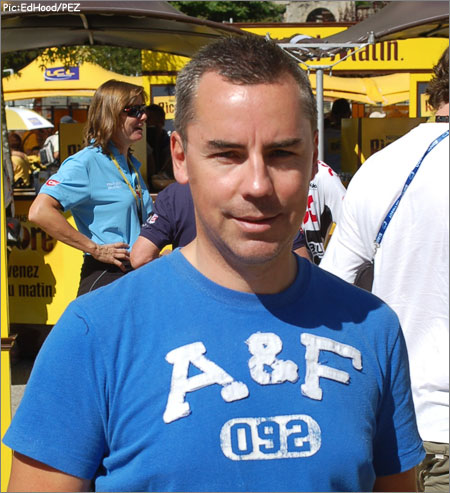 Brian Smith, former Lance team mate at Motorola and now Cycling TV commentator: Schleck has to go on the offensive today, there’s a second category climb (Croix de Montvieux) and CSC must attack there. They have to keep attacking Cadel, it’s the last week, riders are getting tired. They have to take the race to the Aussie, if the next two days are easy, Evans has won the Tour. 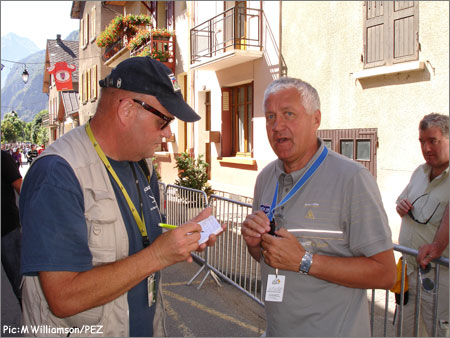 Patrick Lefevre, former Kuurne-Brussels-Kuurne winner and now manager at Quickstep: You journalists, you all think I have a chrystal ball, ask me in Paris on Sunday night and I will tell you! I think that CSC will not win, their opportunity was missed, Evans was in crisis on the climb to Prato Nevoso and they did not capitilise upon it – for me, it’s Evans. 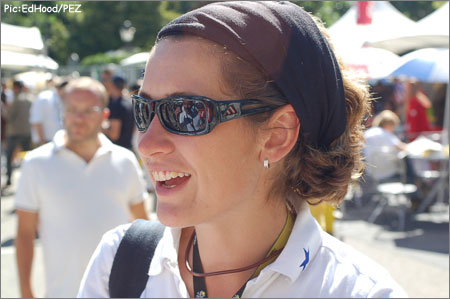 Emma Davies Jones, ex GB ladies squad star and now Eurosport commentator: CSC will put up a massive fight between now and Sunday; I hope they pull it off because I don’t want to see Evans win. Early in the season I thought we were seeing a new Cadel, he rode an aggressive Paris – Nice and I thought he’d ride an attacking Tour but all he’s done is follow, follow, follow. CSC were quiet in the first week but now they’ve taken it on – I hope it’s Carlos or Frank in Paris. 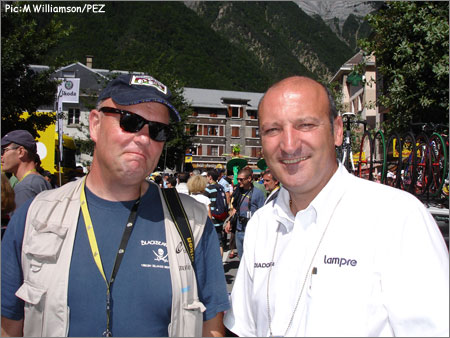 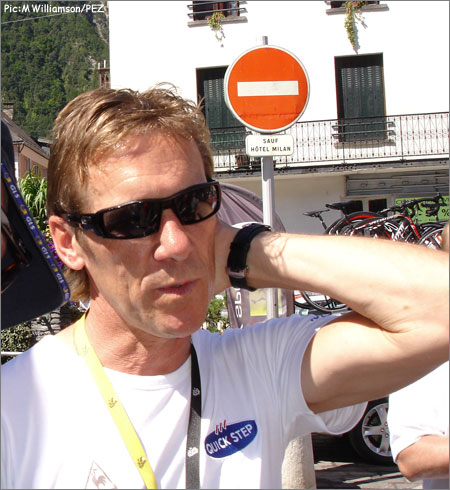 Dirk Demol, former Paris – Roubaix winner and Quickstep DS: Evans, why do I say that? Because you asked me! Sastre didn’t do enough yesterday and Evans is by far the better time triallist. I don’t think that CSC can take any more time today.

For us it’s been OK, we knew it would be hard without Tom and Stijn Devolder was sick before the race started. He tried hard to remain in contention but those first days in Bretagne were very tough. On the Hautacam stage Stijn cracked, not just physically but mentally. Like I said, we knew it wouldn’t be an easy Tour for us. 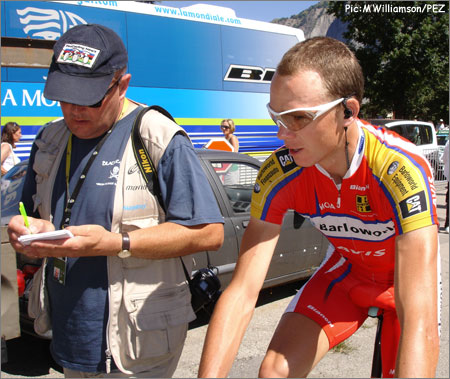 Chris Froome, Barloworld climbing revelation: I thought previously that it would be Cadel, but the way CSC are riding I thnk they can win. It’s not as if Sastre is a bad time triallist, I think he’ll hang on. 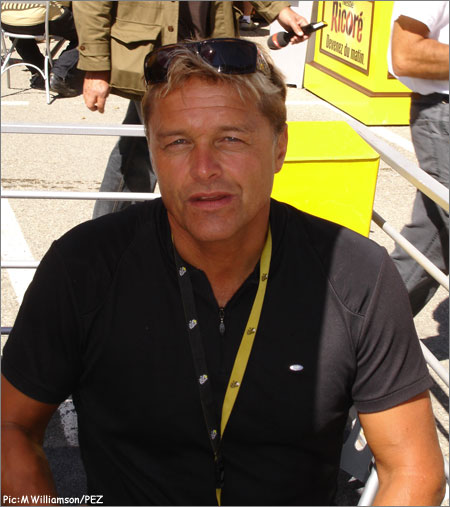 Dag-Otto Lauritzen, former stage winner on L’Alpe D’Huez and now Norwegian TV pundit: Has Sastre done enough? I hope so, I’d like to see him win, but I don’t think so. I have nothing against Evans, but CSC have ridden such an attacking race, and of course we have Kurt-Asle Arvesen (Norwegian champion) in the squad, he’s a good friend of ours and we’d like to see his team win. 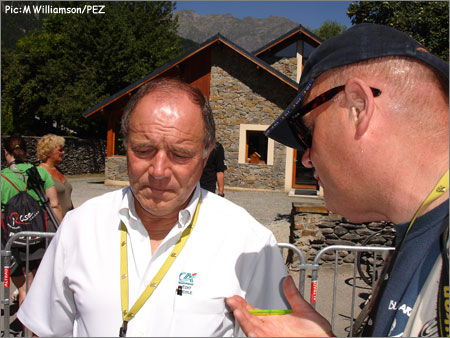 Roger Legeay, Manager with Crйdit Agricole: I don’t know, but if I had to say one name – Evans. Our Tour? It’s been good, we had no GC ambitions, our riders have shown strongly and we have had two stage wins, from Hushovd and Gerrans, so I have no complaints. 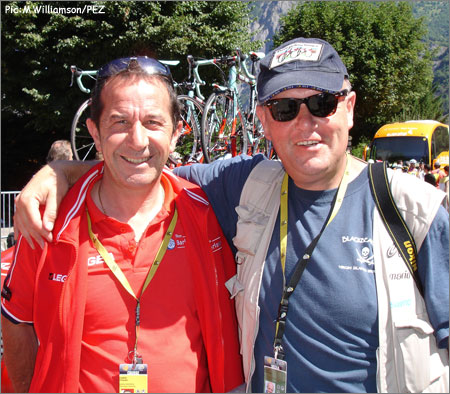 Claudio Corti, former worlds pro champs silver medallist and now manager at Barloworld: I do not think for Sastre that he has enough time on Evans going into the chrono. The next two days are not hard enough for CSC to get more time, and anyway, a break will go early today.

For us the Tour started badly with crashes and broken bones for Soler, Longo, Cardenas and Cooke. It’s disappointing because L’Alpe D’Huez stage was made for Soler. I’m very pleased with Froome and Augustyn, they are strong, young riders with big futures.

And what do the Pez guys say?

Ale Federico: Sastre; Frank will launch a big attack today to weaken Evans, Sastre will hold on in the time trial.

Al Hamilton: I’d like to see Sastre win but I don’t think he did enough yesterday – it’s going to be Evans or Menchov.

Martin: Evans, I don’t think much will happen today; despite CSC trying hard it’ll all be down to the time trial and Evans will win.

Pez: I’ve been rooting for Cadel, but I’d say CSC have done more to earn this win than anybody. Sastre is the underdog come Saturday, and I’ve got a sweet-spot for those underdogs!