We know you’ve been missing him, there’s no getting around it – it’s not a Grand Tour without our roving scribe Ed Hood doing the rounds for a week or so. The travel from the northlands all the way to almost the Mediterranean was anything but simple, but fortunately there’s oh so much to talk about when it comes to Le Tour, so grab a chair and READ ON!

We missed the stage, but we did get the Forigoule; it’s a digestif made in Forcalquier; and mighty nice it is too. 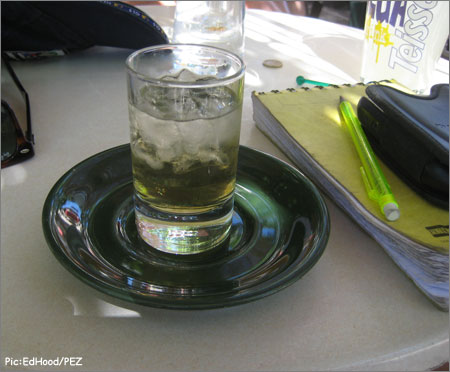 The plan was to meet Berkley Cal. ex-pat and Pez reader, John Larsen in Forcalquier, then watch stage 14 hurtle past en route Digne-les-Bains.

The plan was going fine, right up until Jet2.com left us sitting on the tarmac for an hour at Edinburgh airport!

Always ‘up’ for a challenge, Martin hustled our Volvo hire car out of the airport car park at Avignon under cloudless skies with the chicaddas hard at work; the temperature in the 30’s and Kid Rock’s, “All Summer Long” as the sound track. 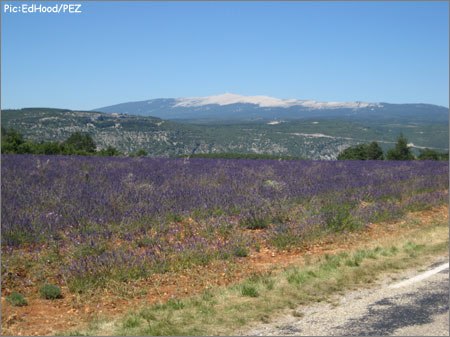 This is ‘Roman France’ green, but a parched green, not like our rain forest green, back in Scotland. As the BlackBerry satnav struggled with the Tour ‘deviations,’ way over on our left we could see mighty Mont Ventoux’s limestone cap reflecting the hot Provencal sun. The vineyards spread out around us as we climbed into the limestone hills, trying to beat the peloton to Forcalquier. 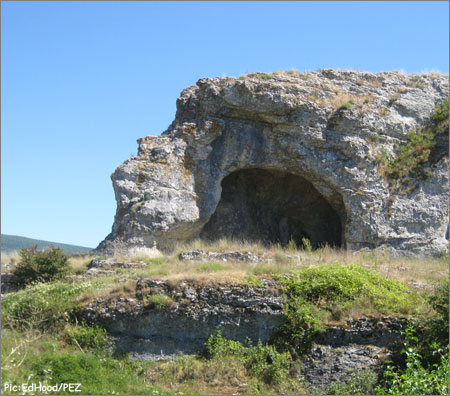 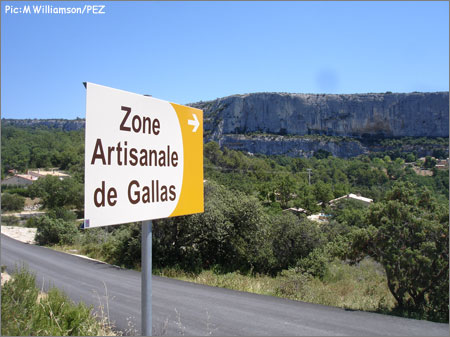 We crested a hill and there, across fields of lavender, with the air warm and sweet, was The Ventoux, much closer now and completely living up to it’s ‘Giant of Provence’ tag. 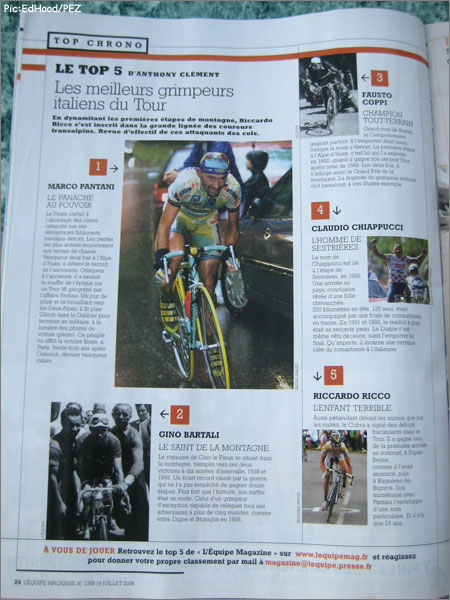 A quick stop and a sprint into a ‘Tabac’ shop in Sault to grab L’Equipe. There’s a magazine with it on a Saturday, this must have been printed before the Ricco scandal; there’s a feature in there; ‘Italy’s five greatest Tour climbers,’ and who’s number five – yeah, snake boy himself. During the Tour they always reprint a L’Equipe headline page from years gone by. Today, from 1978, we had; “Pollentier en Jaune et Banni,” that’s; “in yellow and banished.” For those of you who don’t remember that far back, this episode involved a dope check sample, a rubber tube and someone else’s urine; ah, the good old days! 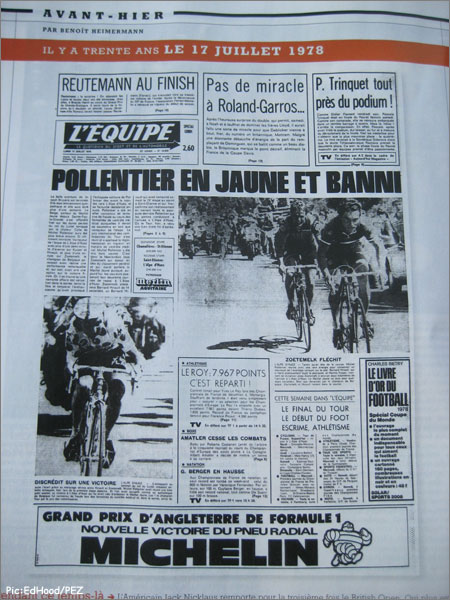 The paper section carried a picture of Cav’s fourth win, taken from behind – he was lengths clear.

The race passed through Forcalquier only minutes before us – thank’s very much, Jet2.com. John Larsen met us, and we sat down with a Forigoule in front of us and the church bells chiming, to talk Tour and living in France. John reckoned that the locals are blasй about the drugs aspect; “they view it as a show, not so much from the sporting angle, it’s the Tour and everyone goes to see it.” 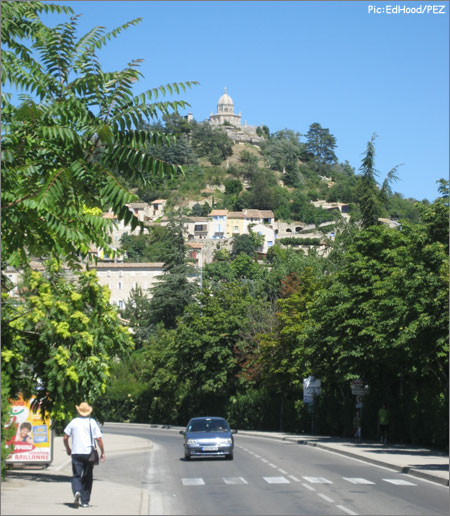 And living in la Belle France, compared to the US of A?; “Forcalquier is a bit ‘out there’ – a lot of artists live here and it’s much more laid back, like when you go to the bakers to get the bread, it should take five minutes, but it takes half-an-hour because so many people stop to talk to you!” 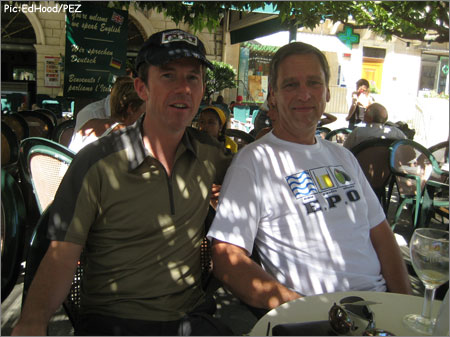 We asked about how business is done in France; “it’s less formal, there’s a lot of hand shakes and going for a beer. Deals tend to be done with friends.” John misses Lance, likes Cav and hope Christian Vandevelde will make the podium.

As we hit the road to Digne, I received a text from my buddy and Giro pilot, Dave, watching the action on TV whilst on his vacation “Oscar wins, Cav not in top ten – you can’t win them all!” 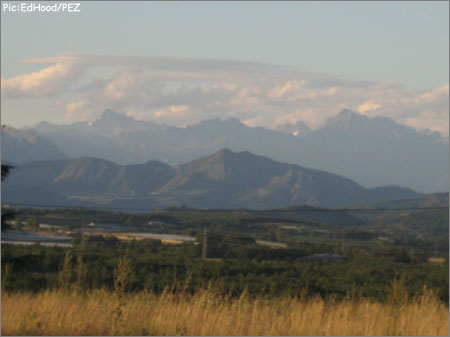 Mйes, and the cliffs tower over the town as the Alpes de Provence begin to fil the windscreen.

Digne isn’t far now as the team busses roll past with police escorts; “didn’t see the Saunier bus there, Martin?” 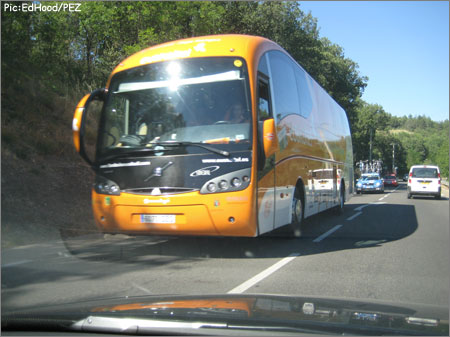 It’s 38 degrees in Digne as the barrier crews tear apart what they spent all last night building. 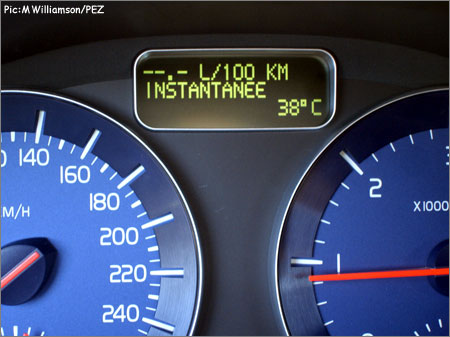 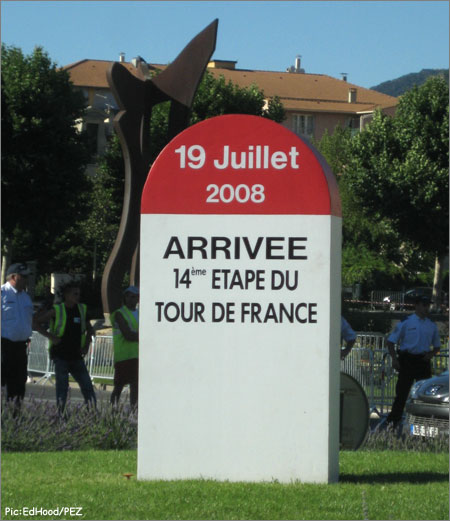 It’s the usual hassle to find the permanence, a school tucked away in the back streets. The “Media’ folks who issue the creds have bolted, but Stephanie comes to the rescue, organises us road books and tells us that she’s arranged for our creds to be at the start for us, tomorrow; “merci beaucoup, Stephanie!” 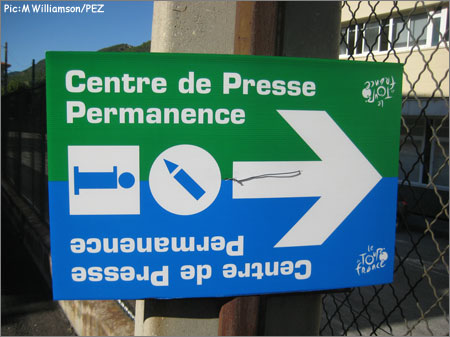 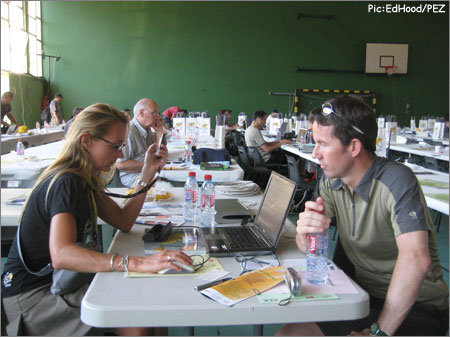 The journo from a “certain mag,” who a couple of minutes ago was too sexy to talk to us is now or buddy, because we’ve managed to get organised and he’s trying to do the same, with less success; it’s a bitchy business! 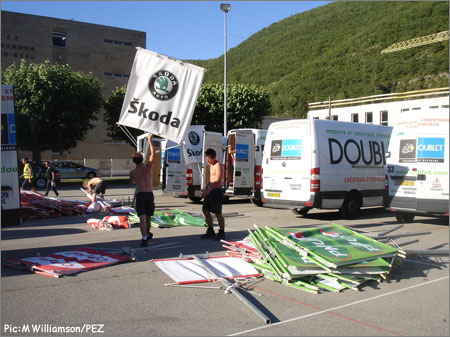 The satnav is cool, as I sit tapping at the BlackBerry key pad, the maps snuggled in the glove compartment, our girl gives us the wire; “in 500 metres, at the roundabout, take the second exit” or, our fave; “follow the road until further instructed,” you bet, girl.