PEZ Roadside Final #2: Two weeks inside the Pez/Tour bubble, and every second an adventure. The whole time was kinda like a mountain descent. You never know exactly what’s around the corner, you’re never sure if you’ll run out of road, you never forget that you’re high-wiring on the ‘going smoothly/going horribly’ tightrope.

Pez had given me the call, so clambering onto the plane in the beautiful Highlands of Scotland the Thursday prior to the Grand Depart felt like a bleary-eyed honor – the next time I’d be tasting fresh air, I’d be in Brest for the Tour and learning how to survive the biggest show in cycling. 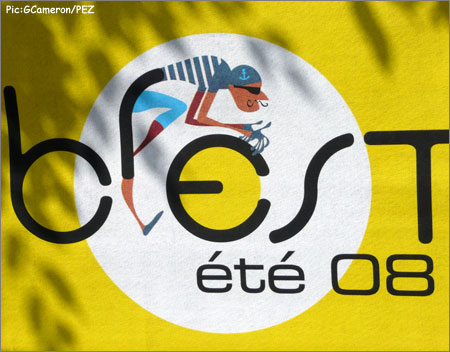 It’s a massive sink or swim ocean of possibilities – could I deliver the goods on time? Can I even get the goods in the first place? Finding out is the biggest journey …

Things started brightly, with a helping hand from Dominik at ASO who sorted the credentials out in a flash. It’s always …. always …. a worry until you get your car stickers, road books, press pass, etc. It never hurts to ask if you’re not sure – Dominik answered my queries about the car sticker permissions and hors course itineraries.

It also never hurts to be polite to everyone. I’ve learnt it’s better to play safe and ask the cops for permission to abandon the car on the roadside for a quick picture.

By the time I’d navigated from Morlaix to Brest’s Penfeld exhibition centre for the pre-race press conferences, I felt like I was truly on the inside. These are some of the world’s most finely tuned athletes, and they’re mucking around before the biggest race of the year. Kim Kirchen, who would go on to have a pretty fine Tour, is standing in front of me wearing a Stetson rather than his race face and a yellow jersey. 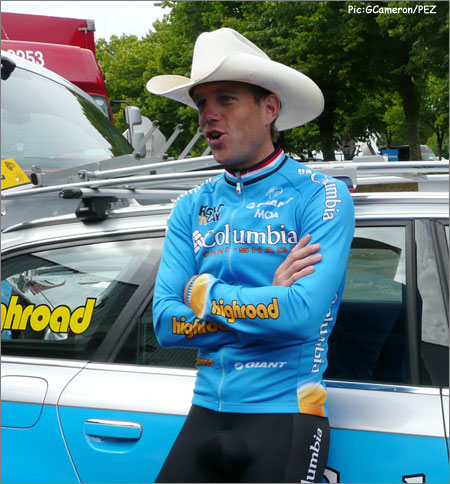 Wandering around inside the barriers, looking out at the mass of faces, is a weird thing to get used to. Nearly everyone there wants to take your place, but you’ve got a job to do because Pez and Jered are waiting for pics so PEZ-Fans can see what I saw …

I spot Robbie McEwen chatting to a former team-mate Josep Jufre … JJ got the chop from the Predictor-Lotto team as his results weren’t good enough. It’s going to be double frustration for the Spaniard – he couldn’t have been worse for Evans than his expensive replacement, or who knows what he could have done in the Tour full-stop if Ricco and Piepoli hadn’t been so stupid.

But that’s the Tour for riders, journos and followers … are plans made and abandoned. Sometimes you go by ifs and maybes. 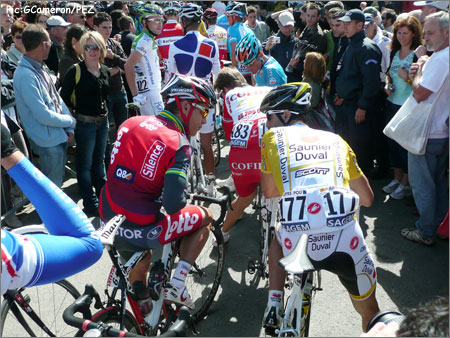 The Tour is rolling, and I am too … living by the road book, the Sat-Nav and the deadlines. There’s time to stop for some scenic shots. Apologies for hogging the foreground, in Gouareg village. 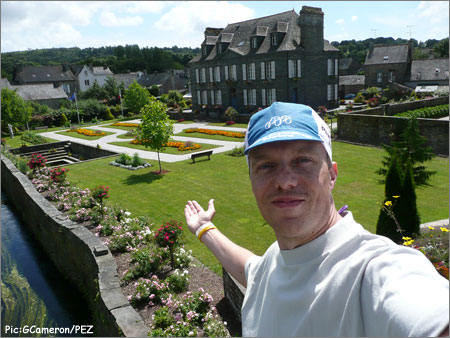 With a sore head after getting belted on Chouchen the night before, it’s an early start for stage two to Saint Brieuc, snapping pics of the memorabilia the Bretons, some of Europe’s most passionate fans have brought to the roadside. 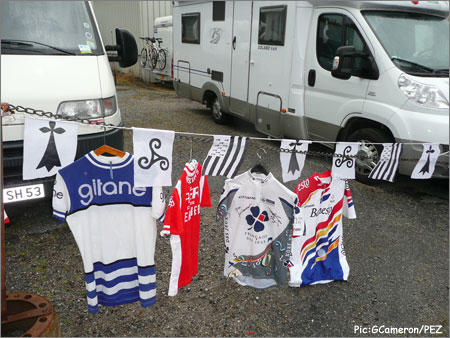 The sage advice you get from the veterans makes perfect sense by day four. Sleep when you can, conserve your energy, don’t have (m)any big nights out … you’ll need to be sharp for the next day.

Grab a decent meal when you can, better if it’s on the race route – saves time and hassle. 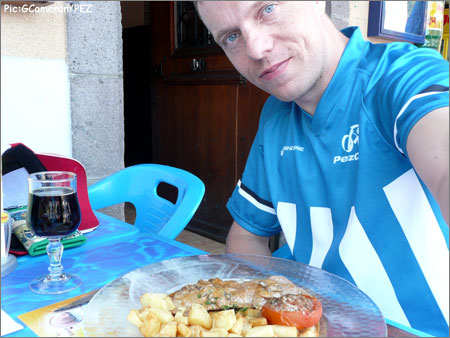 It’s not too much of a consideration for me these days, but there aren’t too many sporting events where need a mobile hair salon. Luckily for the immaculately turned out Champion girls there was always help at hand. 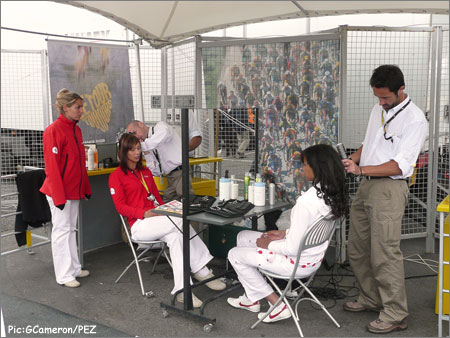 A major highlight of my Tour was the amazing ‘Cannonball Run’-style trip in the Agritubel team car. Following Eduardo Gonzalo Ramirez in the Cholet time trial, piloted by the expert Denis Leproux was an incredible experience. 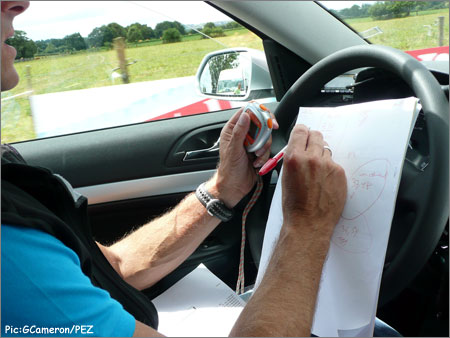 Denis seemed to be some highly evolved part-Directeur Sportif/part-team car as he disproved the theory that men can’t multitask. Taking time checks, navigating, cajoling Eduardo, radioing instructions, driving at speed … impressive stuff, and thanks to my gig with PEZ, I was there to check it out!

TV doesn’t do justice to how fast these guys can hammer their bikes and bodies round a TT course. 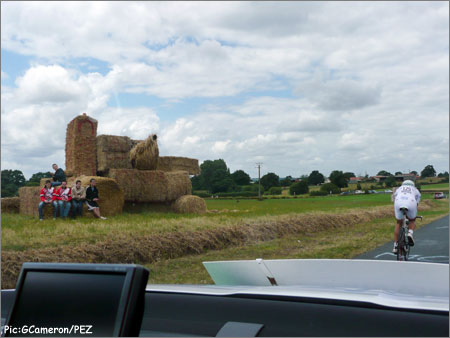 It’s not only the TT that surprises with the speed. Even the mountain stragglers would put me thoroughly to shame. On the stage to Aurillac which wasn’t even that “tough”, the shelled out looked like they’d rather be anywhere else but there … and they were still flying. 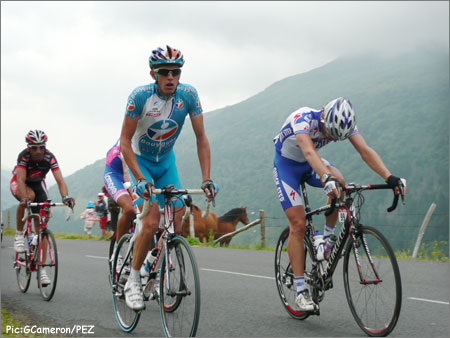 By the sprint finish in Nantes, it’s not Tour weather and the stragglers behind Mark Cavendish’s blazing finale are a Technicolor raindrop and fatigue is setting in. 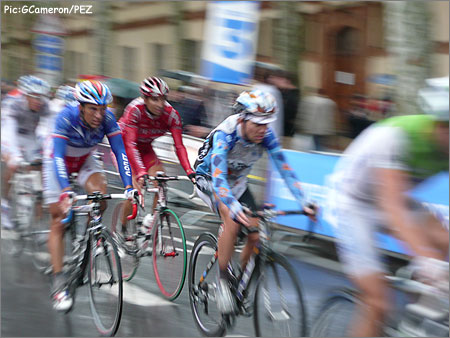 Wim Vansevenant doesn’t know which way to turn. The ace domestique and lanterne rouge is used to chumming along with Robbie McEwen, but to pay the bills this year he has to look out for Cadel Evans.

That’s a little like the feeling for me. There are things that would be cool to do, but there are priorities. I can’t squander time chasing dead leads. Everything has to lead to a viable PEZ-worthy story.

It’s in the looking back at photos that you see things that seemed unimportant at the time … on stage nine, I was hanging out in the Espace Presse, the press tent just beyond the finish line. 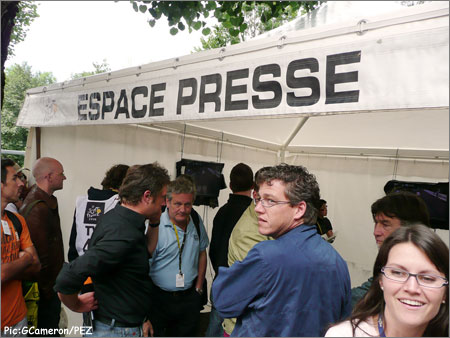 Earlier, I’d been sitting in the press room watching as Ricco attacked on the Aspin. His move was met by an arched eyebrows mix of delight, laughter and amazement.

As the splintered peloton chased Ricco home, the chatter was that the big battle should be for second because 99% of the journos seem convinced that Ricco would be DQed. I snap a shot of the doping control list … by now of course, the shit coursing through Ricco has been picked up. 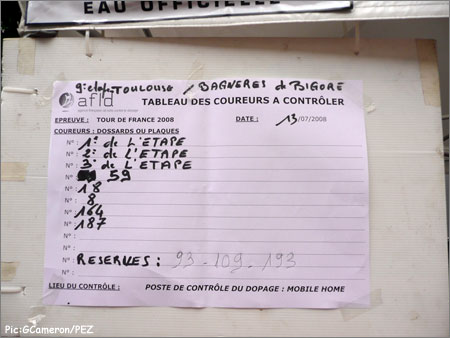 Ricco’s soon to inherit the white jersey from Andy Schleck who coasts over the line looking knackered. It’s seeing the looks on the different faces after a stage that’s fascinating, hearing the rumour mill cranking up that makes you wonder what you can speculate about in print. Who’s clean and who’s juiced? When you’re inside, some things start to make a little more sense. 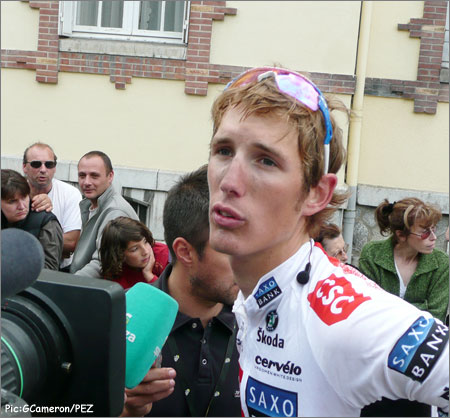 Another highlight – the start village. The first few times I walked in, I was like a paranoid at the airport security … they’re going to stop me, they will.

But they don’t. They’ve got other fish to fry, and as long as I don’t lose my pass, I’m in. The Tour painter is back again, knocking out a casual delight. If he had a tip box or charged by the photograph every time someone wielded a camera he’d have made more cash than CSC did at the race. 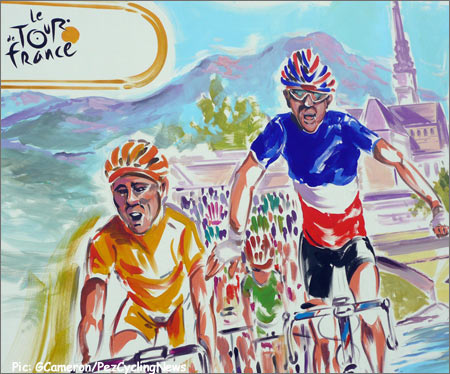 Fans are gawping at the largesse of the sponsors, picking up freebies and grabbing the autographs when the riders brave the start village. I snapped a pic of Lilian Jegou chilling out with a copy of L’Equipe … hours later he was out with a broken wrist. It’s another reminder to me that the Tour requires total concentration whether on bike or not. 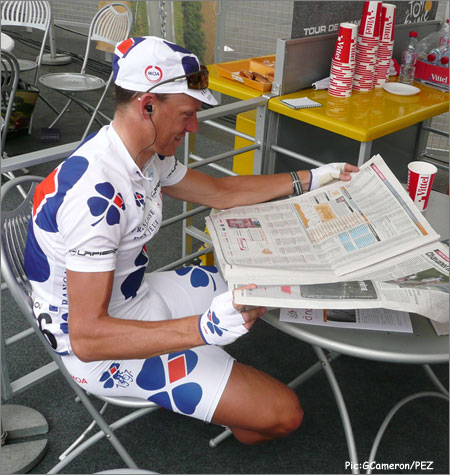 Rest day, journee du repose, whatever you want to call it … is a rest for some. But there are press conferences to attend, reviews to check out. It’s the inside track once again at the Team Columbia press day.

Christian Prudhomme and Bernard Hinault are staying in the background while new heroes get their time in the spotlight. One guy who seems like he could have done without it that day was Mark Cavendish, who emerges from the team hotel with some choice words. 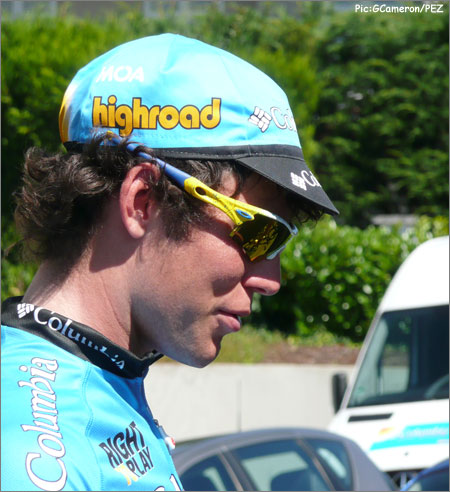 The mechanics mock order him over: “Mr Cavendish, apologise for your language! Why are you swearing, Mr Cavendish?” “F**kin’ journalists and their stupid f**kin’ questions!” By this point, everyone in earshot is laughing.

After chuckling over Cav’s less than sunny mood, it’s rumour time again. A source tips me that Ricco’s a walking bullseye. The AFLD are apparently convinced he’s “at it”, and that it’s only a matter of time before he makes a mistake.

It’s this, depressing as it briefly is, that helps to make the trip real. You feel like you’re really getting closer to the heart of the experience. You hear first hand, rather than the Chinese whispers that are sometimes what reaches the papers days later.

My last day on the Tour, and it’s scandal time again as Barloworld find out they’ve got a walking pharmaceutical experiment in their midst. Meanwhile, yards away on the sign-in podium, Riccardo Ricco is looking a bit smug. It isn’t going to last … ‘rather lacking in venom now, ‘The Cobra’ is back home before I am. 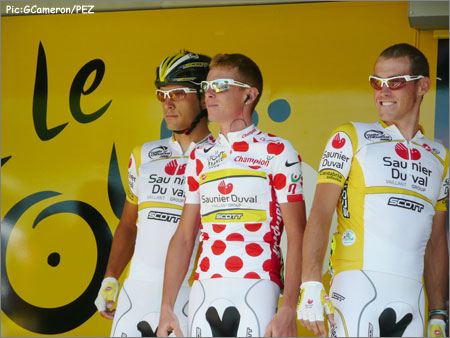 As Ricco was getting spruced up for his final podium appearance, the field was still coming in and grabbing drinks to stave off the blistering heat in Foix. Sweat streaked faces, hollowed cheekbones and Jens Voigt yelling at riders to get out of his way! This is the Tour. 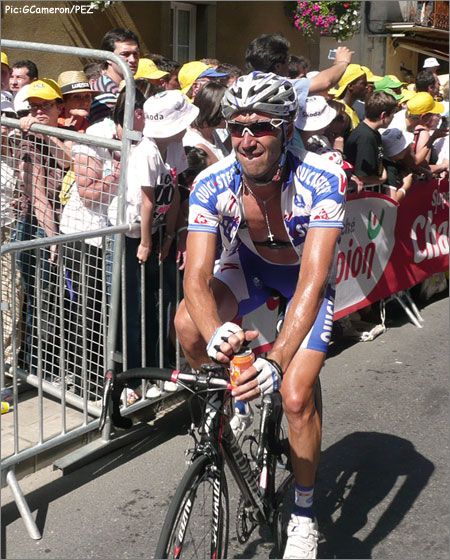 Sometimes, though, the good guys win … Kurt-Asle Arvesen finally nailed a Tour stage just as I was leaving. As I sneaked a look out of the Video Conference unit, he’s there, flanked by Oscar Friere, explaining to the assembled press just how close he came to losing it on the line. 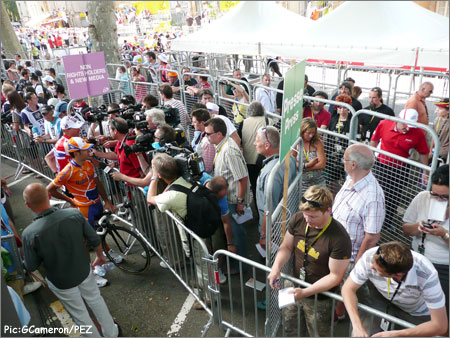 It’s a big assignment, it’s a challenge, it’s a coming of age to follow the Tour. Knowing what I know now, would I go again? I’ll be waiting for the call until next summer …

I have to pass on my thanks to everyone who made it all possible: Pez and the crew around the globe; Dominik, Thida and Clement at ASO; the unfailingly helpful guys from Orange Telecom at the Salle de Presse who handed out croissants to all the journos pulling a late shift after stage nine; Pez pal Pascal Orsini; Xavier Benoit at Skoda France; Elisabeth Petzl and her podium girl colleagues … and my girlfriend for putting up with pictures of the podium girls.