PEZ Roadside Stage 10: The Hautacam looms into view today…a major rendezvous for the race favorites. While the Tour won’t be won, someone will definitely fall out of contention. After checking out the start line activities, I ambled along to the base of the climb to see what was going on.

As always, there’s stuff happening at the start village – chit-chat being exchanged, varying degrees of tat being given out and a general air of anticipation. 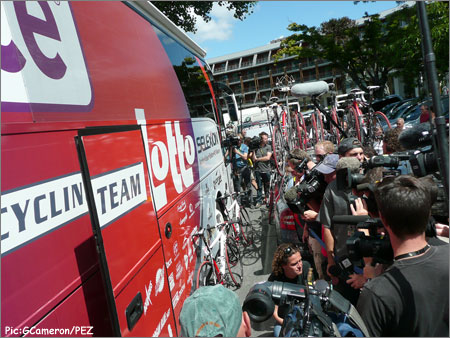 Especially outside the Silence-Lotto bus – every film crew, every radio crew, half the journos – all patiently hanging around for Cadel and his sore arm to emerge. It wasn’t worth my while staying because a much more attractive proposition had presented itself.

I’d bumped into PEZ pal Pascal Orsini in the Village Depart. Did I want to interview a podium girl, Pascal wondered? How can you wonder such a thing? The answer is obvious. Pascal pointed me in the right direction. We cleared it with Xavier Benoit from Skoda …. but you’ll just have to wait to be introduced to Elizabeth Petzl …… 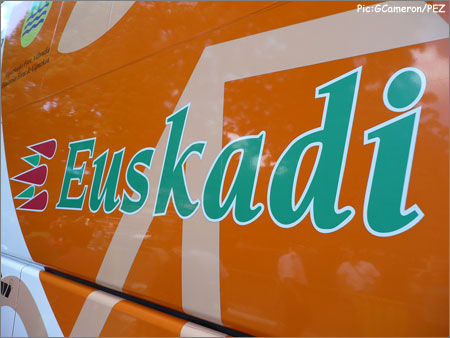 Next up, a quick word with Scott Sunderland down by the CSC-Saxo Bank bus. His guys came out of yesterday OK and the team have cards to play: “Yeah, let’s hope they’re the right cards. The guys are in good shape and confident, so we’ll see.”

I’d parked the Pez wagon off-course so it was a bit like the Cannonball Run as the press left the start and piled onto the A64 for Lourdes and on to Argeles-Gazost. Toll tickets and credit cards are slammed into the toll booths – and the cars screech away like F1 cars after a pitstop.

A couple of Ks down the road, though, it’s all very different. The Aire des Pyrenees rest stop was like a cycling journalists’ outdoor convention – half the press corps had all stopped together for much refuelling on gas, biscuits and general rubbish. Loads of journos I now recognise or are on nodding terms with stocked up on crap before it was back into the cars to cross the race route at Lourdes before the riders come through. 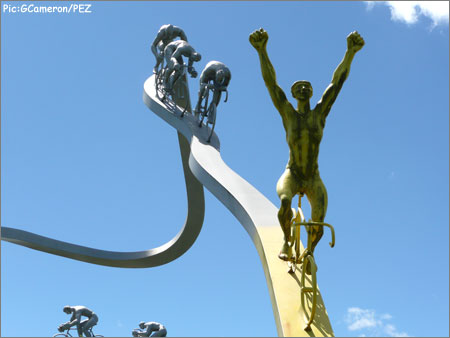 A very cool, very large sculpture of a yellow-jerseyed rider leading his silver competitors dominates making it one truck-stop worth visiting – if you like that sort of thing. 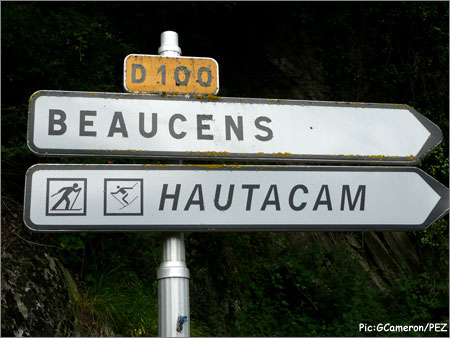 The jaunt in to Argeles-Gazost was pretty swift. Then time to get set up in the press centre, grab a couple of complimentary bottles of Vittel and make my way to the climb. Not everyone did the same … for a lot of the print and web guys, it’s a case of watching the race on big screens in the salle de presse. Most of them only ever see parts of a TT in the flesh… if they even see that.

It was a long, long walk from the Salle de Presse along to Route de Hautacam and up onto the climb. I wanted to see the riders in action, gauge who was going well and get some half-decent pictures so I picked a spot about 2kms up the climb.

Everything was pretty relaxed where I was: most folks choosing to sit in the shade out of the baking sun. There were a lot of very sunburned bodies, but I won’t subject you to the horror film – a lot of guys who rarely take their shirts off won’t forget this Bastille day for a few weeks. 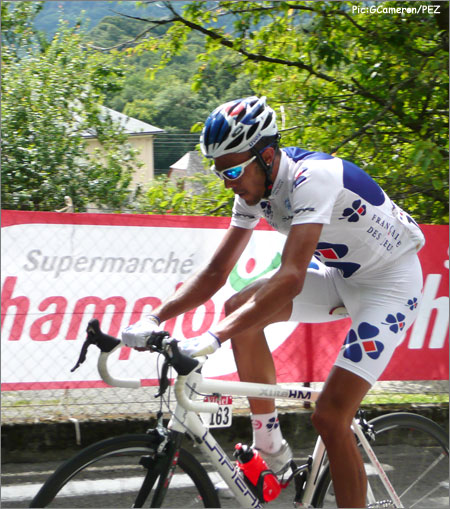 For a national holiday, it needed a Frenchman to try and make an attack stick. Remy Di Gregorio was the guy the fans were hoping for today. He heaved into view round a tight right-hander, flanked by motorbikes. Next up, the chase group tearing his lead to pieces. I see Evans, Schleck, Sastre and Ricco but Kirchen is already at the back.

Di Gregorio’s already been over the Col du Tourmalet, don’t forget, where he pocketed 5000 Euros for topping it first. He deserves to add another zero to that: 17.7km long, average gradient of 7.5% to an altitude of 2,115 metres. It didn’t look to me that he’d got enough in his legs to hang on and win.

Maybe that’s not a bad thing. All the previous Hautacam winners have had problems of varying severity, but arguably only Bjarne Riis’s were self-inflicted. Luc Leblanc’s career went into meltdown not long after his world title win when his team folded. Javier Otxoa lost his career and his twin brother to a car driver’s inattention. Let’s hope the fourth winner has a better time. 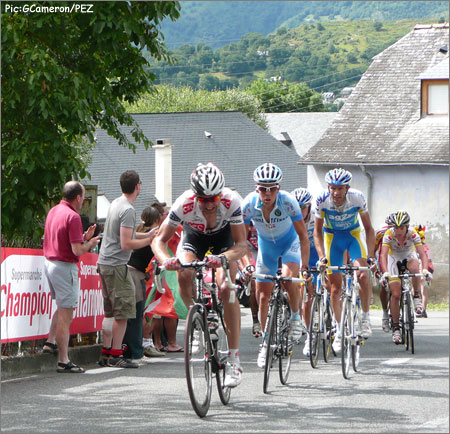 The Hautacam’s a horror show, resulting from two tectonic plates rubbing each other up the wrong way – 14.2km of suffering at 7.2%. The finish might only be at 1520 metres, but it’s nasty. 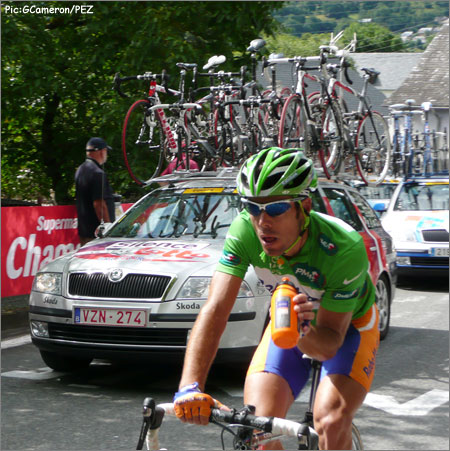 The Tourmalet obviously hasn’t caused the wreckage a more climb-filled stage would. The big breakaway group probably let the big guys keep their powder dry, and there’s not many stragglers going by – just three pretty big groups sticking together. 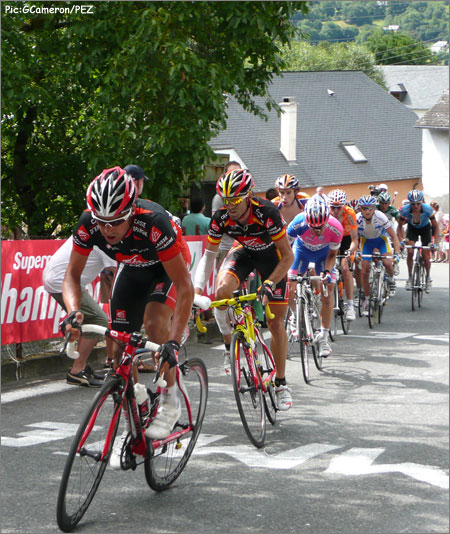 The one guy struggling is Alejandro Valverde …. paced by a domestique, he’s already losing minutes to the leaders. Most people seem to think it’s just two Caisse d’ Epargne domestiques struggling though, so the reaction to this is a bit muted. 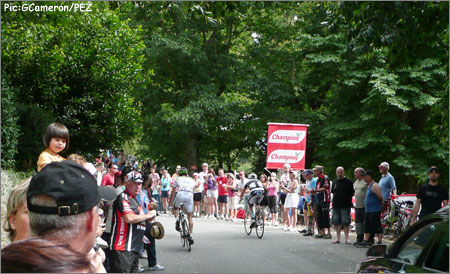 It’s pretty family friendly where I am – the hardcore fans are further up, at the top. You can go as a press member, but you’re going to have to wait there until the last guy has come in for an escort down. Could take a while … 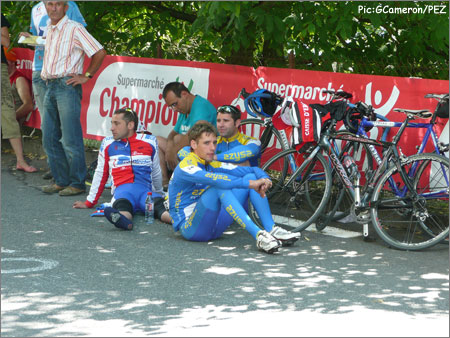 Bike groups have abandoned their attempts to get higher and are just sitting shooting the breeze. It’s a better Monday than being in the office. 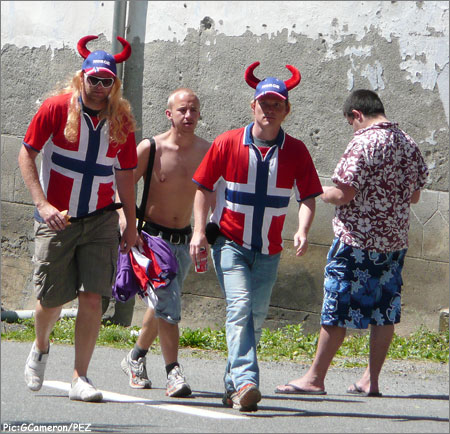 The only Viking warriors I see today are less marauding, and more mellow. They meander past rather than pillage, but I suspect some of their countrymen further up might be acting closer to the old spirit. 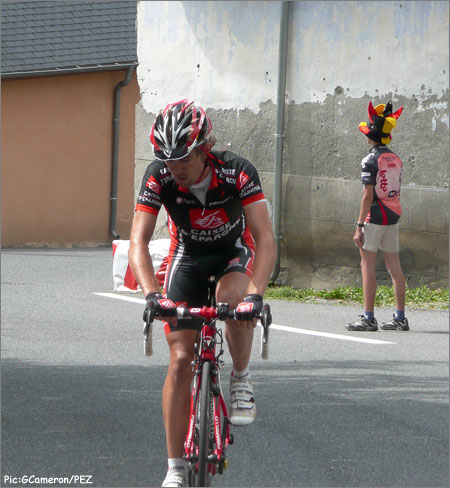 It’s amusing to see how different fans react – David Arroyo has done his best for Valverde, but the young Silence-Lotto fan only gives him the briefest notice. A little later, Julian Dean gets a big cheer as he goes slogging up a good 20 minutes after Di Gregorio passes. 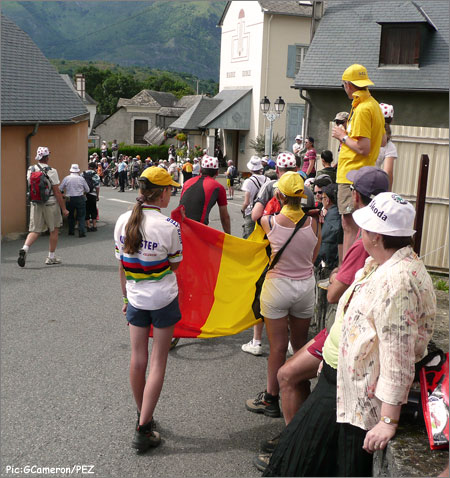 I watch a QuickStep family get very excited when the sprinters’ group appears. The daughter gets even happier when someone in Scott Sunderland’s CSC car throws her a musette …. pretty cool souvenir! 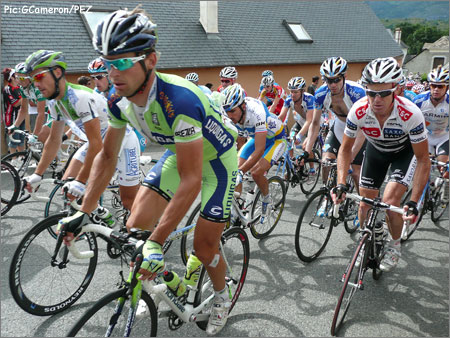 Higher up the climb, some fans have been there for days and the riders will get the full blast of enthusiasm. I was pretty happy with my chilled out day at the foot of the Hautacam, though – seeing the race start to take shape on the slopes is what the Tour’s all about. 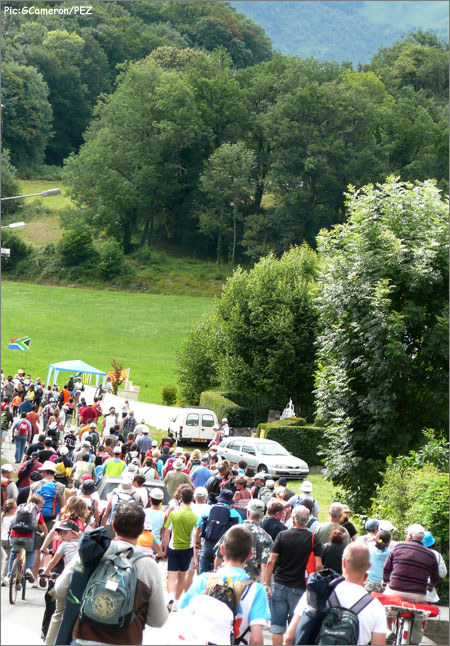