Time to join the heaving throngs of fans, technical staff, organizers, hangers-on and hangers-out with a desire to pass through the Village Depart’s gates and into cycling celeb heaven. It’s the Grand Depart of Le Tour de France! 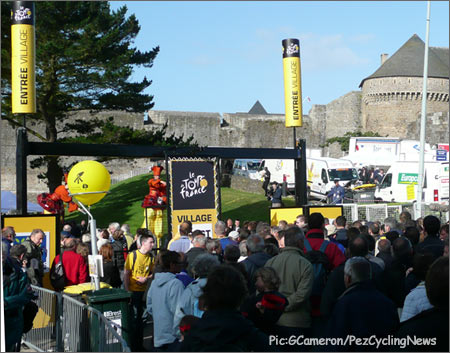 If a fault line opened up in the ground right outside those barriers at around 9.15 this morning, so many people would be lost they’d have to restart pro racing from scratch. I saw, in the distance, Christian Prudhomme beaming as he glided forward to open the gates with an organizational flourish – then it was like some Biblical migration as a horde stormed down to the holiest of holies. 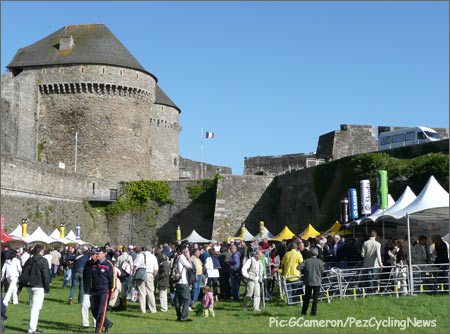 This being my inaugural visit to the Tour, I cleared it with the Pez to just hang out in the Village Depart to soak up the atmosphere. Not knowing exactly how everything would pan out, I was up and on the road early, gone from Morlaix by 7.45am. Luckily, things were running with the normal Tour efficiency that I’ve found so far and I was guided to a miraculous parking spot a bidon throw from the start line. 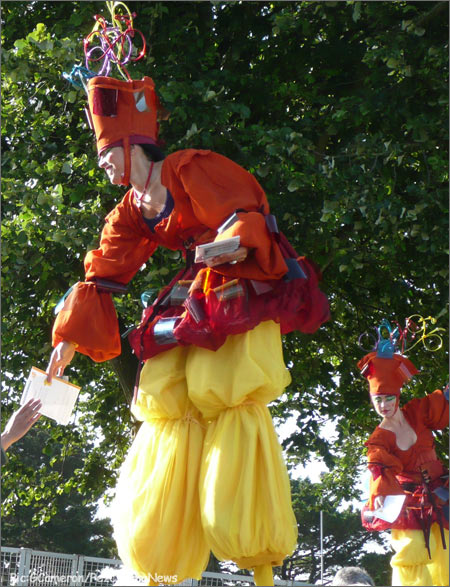 It’s a pretty impressive setting to kick off the world’s biggest annual sporting extravagana – seaside setting and castle ramparts, and a howling tailwind to push the riders on their way and make life awkward for those manning the stands. 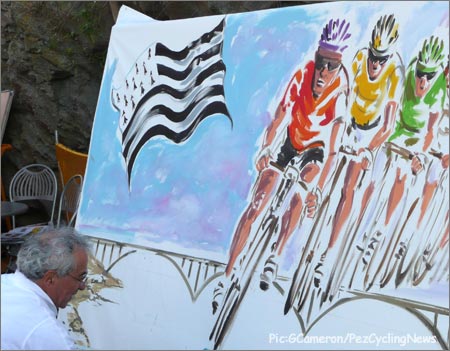 There were familiar faces all around as former riders like Cedric Vasseur (riders’ rep), Richard Virenque (Eurosport), Pascal Lino and even Raymond Poulidour (Tour workers now) were there to press the flesh. 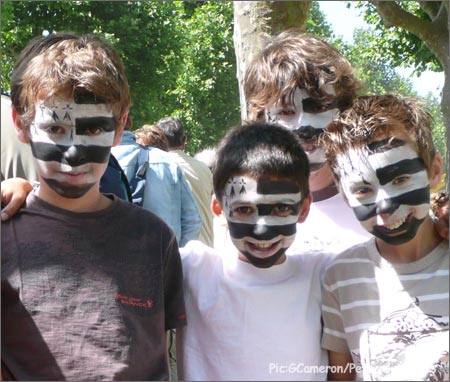 For me, great though it was to see those guys, it was the fun of the ordinary people that caught me up. The couple filling in their betting forms at the PMU stand, the kids with Breton flags and even painted faces.

Passion for cycling isn’t dying yet – especially here in one of the sport’s real heartlands. It’s great that the younger fans get to fall in love with the Tour in their home region while they display a passion for their homes and culture. 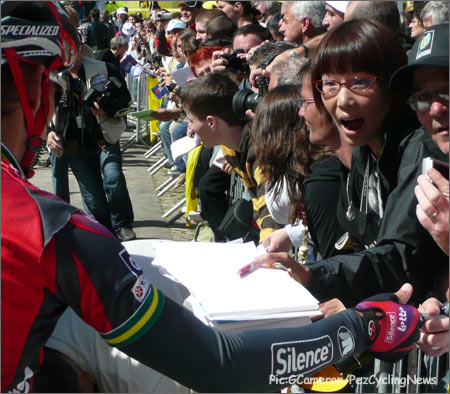 Families of all demographic categories, kids done up in (mostly) Bouyges Telecom kit, young and old, and even the people normally ‘too cool for school’ were getting caught up in the excitement as buses rolled up and riders started to meander to the sign-on. 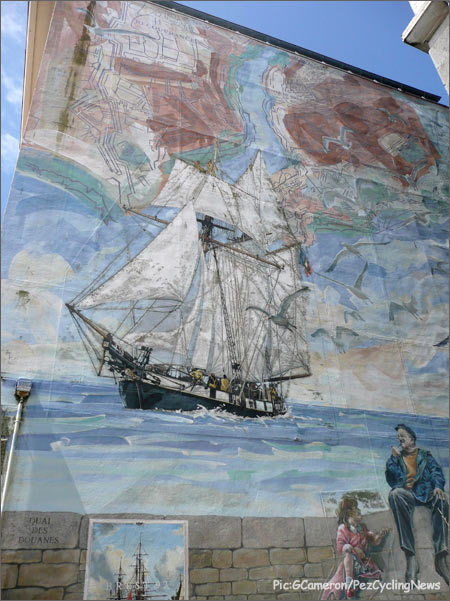 Young kids racing up and down looking for autographs, signatures all over caps, shirts and flags. Veteran fans looking a little teary eyed as they got a moment of Poulidor’s time. The great man smiled, nodded and handed out cards from a massive stack of cards that he had to keep replenishing. 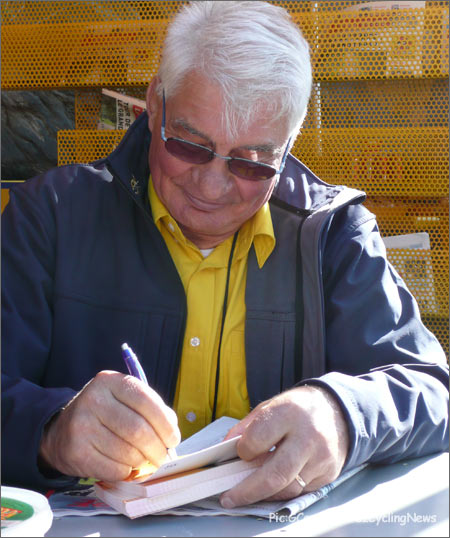 Raymond Poulidor might have found the most ingenious series of ways never to win the Tour, but they still love him here. 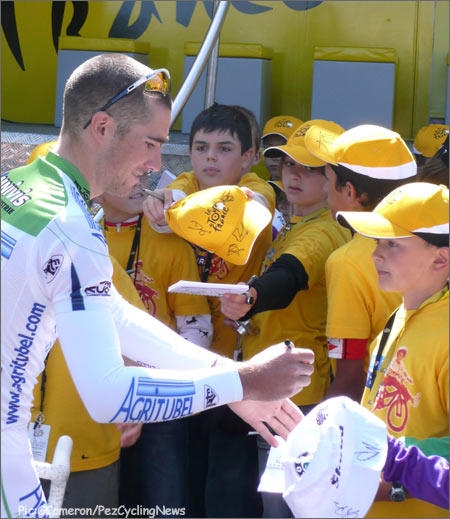 There were fans everywhere … jammed against the barriers in front of the stage, and all the way around the team buses. Lots of people desperate to see anything move in the Bouyges Telecom bus – admittedly fewer outside the Euskaltel bus – but their fans will be showing up in droves about a week from now.

Aside from snapping pics of the stars, I got a chance to hang out with Hubert, the press relations man for Vittel and sample the fine coffee and doughnuts they offered. Better go back for water tomorrow though as I was distracted by Miss Sport Belgium and her pals walking in. 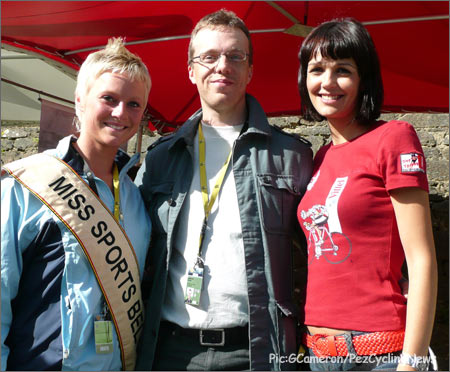 I got to carry out my journalistic mission by having my picture taken with women who I probably wouldn’t even dare speak to in ‘normal’ life. But this is the Tour so it’s allowed … I think. Someone I love is rolling her eyes back home in Scotland. 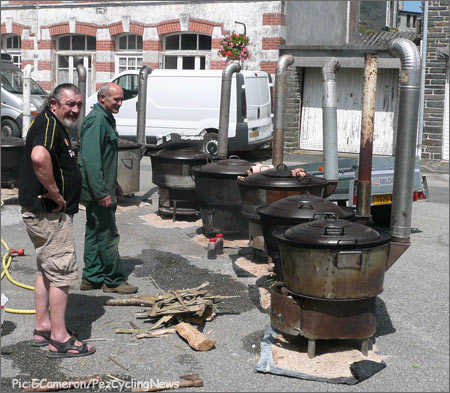 In between times, a quick slot on BBC Radio’s Gaelic station, live from the Tour, to put in my tip for the win – I went for Valverde, so I’m 100% right so far! But it’s not so easy to concentrate when the tannoy is belting out Europop like Ace of Base – 15 years on from their peak, I don’t know if that qualifies as classic rock yet. 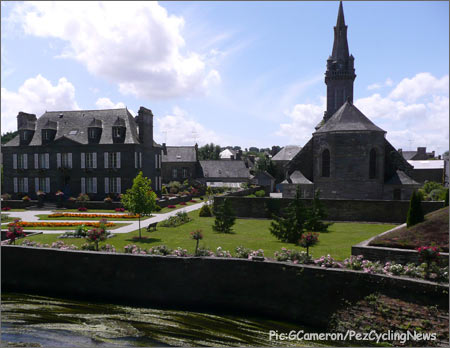 Of course, once the riders were off, things quieted down pretty quickly, and it was a case of a meander down to the seafront for a crepe or two before jumping in the car again. There’s a lot of driving to be done, and I’m now holed up in Pontivy, which gets a visit from the Tour tomorrow, en route to Saint Brieuc.

Not wanting to smash myself in completely, I opted to skip the trek all the way to Plumelec. And now that this is posted, I’m off to read the race manual for tomorrow’s journey. 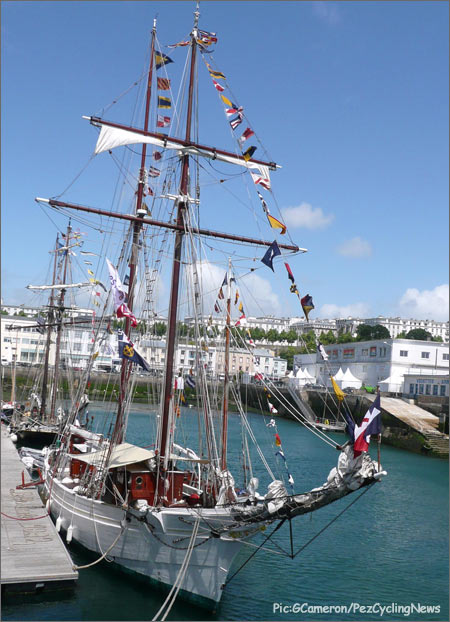 Lesson learned today: Do what the manual says and read what you need to for the next day. If you don’t follow the right route in, via the ‘Mandatory Passing Point’, you’re in trouble.

Laughs of the day: The publicity-tolerant bunny girl on her balcony, with fur-pimped bike, waving across to the riders on the start line. I think she brightened a lot of people’s day. (See today’s Distraction du Tour).

One of the girls advertising an eco campaign for the Morbihan region has spent her last few days dressed as a giant carrot. I asked what her name was and she’d only confirm it as ‘Carrot’. Maybe it actually was, though ….

TdF’08 St.2: French Favorites On The Attack But Hushovd Is Back!