PEZ Roadside Stage 5: It’s easy to lose track of the days when chasing a Grand Tour, and even more so when crossing the vast expanses of northern France. But there’s always a start, a finish, and an adventure in between, even on the flattest stages as Gord reports from Chвteauroux.

From one extreme to the other – yesterday’s press room was on an ice rink, so it was jackets on. Today, the temperature has shot up and I’m baking. The salle de presse is a giant sports hall-cum-oven! Here’s how the day went down for me. 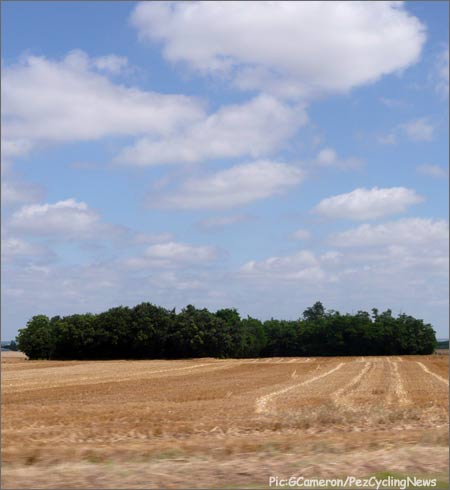 We’re in farm country – the fields stretch beyond the horizon.

Another early start to drive to Cholet. Thank God I don’t live in Nantes – nose to tail lorries all the way in, and not much moving this morning. I got parked just up from the finish line, and then meandered down to the village to take some photos as per Pez instructions. Bikes and girls – a lethal combination. 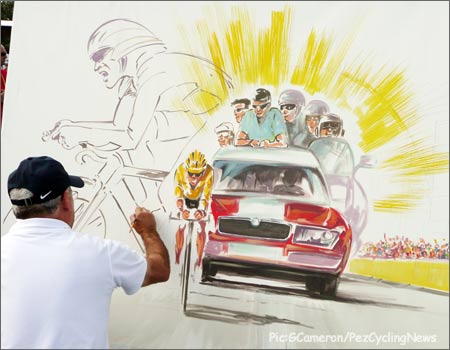 The Tour painter was back in action again, showcasing a phenomenal speed painting talent. Today’s effort was an 8 feet by 6 feet homage to Romain Feillu’s TT in yellow, which he rattled off in around the time it took the Agritubel star to smash his way round Cholet yesterday.

Otherwise things were pretty quiet, as the day hadn’t heated up too much by then. The stilt walkers were in action again, terrifying and thrilling the kids in equal measure.

I dropped in at the Credit Agricole tent for a chat with Maxime Le Franзois, one of the CA girls on the Tour this year. This is only part of her job with the company – she works in the press relations side of CA’s sponsorship activities on the soccer side most of the time. That’s because CA is an official partner of ‘Les Bleus’, the national team, who had a meltdown at the recent Euro championships.

What does Maxime make of the differences between cyclists and soccer players? “Money! Many of the footballers are wealthy compared to the cyclists, and this makes some a bit ….” She motions pushing someone away, meaning the bike riders are usually a bit more approachable and friendly. 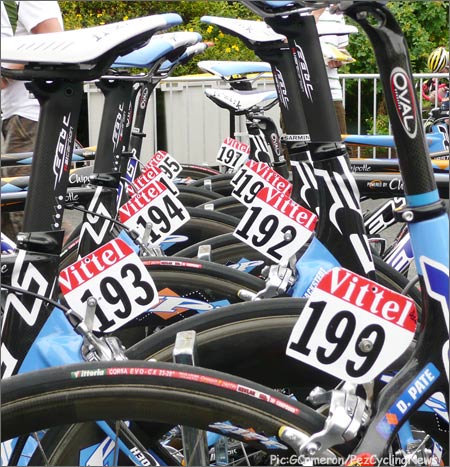 What’s it like working on Le Tour? “Exciting! It’s interesting to meet the public, the clients and the riders, and it’s different from my normal job.” And is it tiring? “A bit …. I’m up at 7 every day, but I sleep by 11 at night so I have plenty energy!” She needs the energy – she’s working all the way to Paris.

Then a final meander round to grab a few cakes and bits of fruit for the road – a smart move as it turned out. 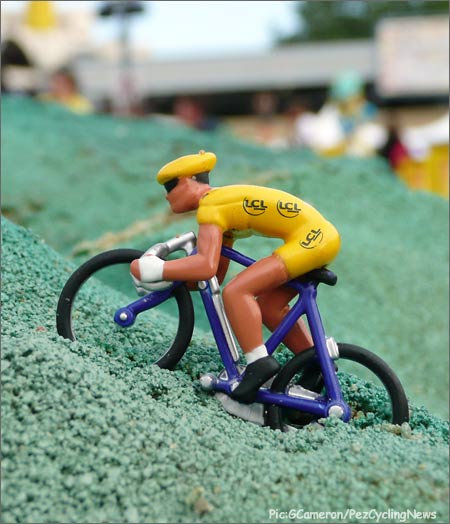 If you’re going to make ‘mistakes’, better to make them on your first trip to the Tour and learn fast. I decided to drive the stage parcours today – not the cleverest idea on the longest day of the race. Myself, a crew from a Norwegian site, and a couple of French guys found ourselves sitting just behind the publicity caravan. And we were able to see, on the long stretches visible, just how much traffic sat ahead. 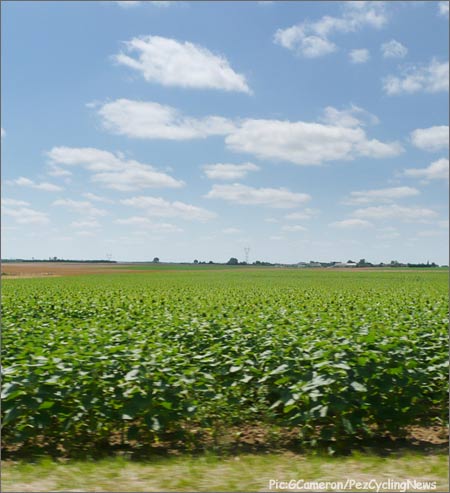 No sunflowers here… just yet.

With our ‘laissez-bleu’ passes, we’re not permitted to overtake the caravan, so it was long steady progress. It would have been smarter to take the ‘Hors course’ direction to zip along the highways the next time there’s a sprint finish. 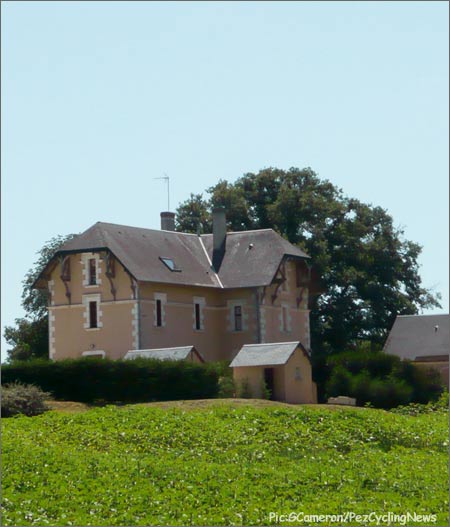 The peloton was belting along today, and I was starting to wonder just how far ahead we’d arrive. It was about 20 minutes as it turned out! The way the sprinters swept into town was amazing considering the slope and the wind in the last 2 kms. 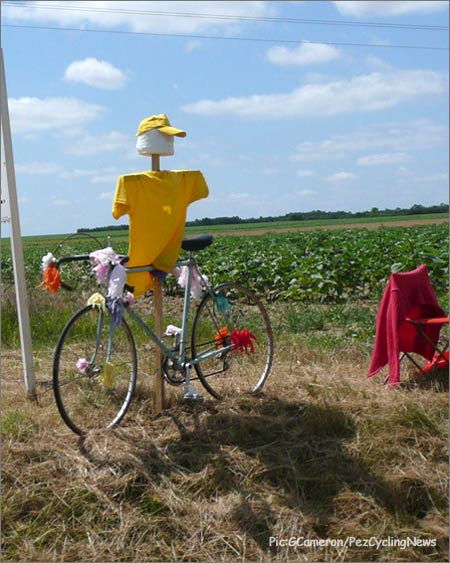 It was a pretty cool experience to drive the route, though – the fans were out in massive numbers right from the start line and they were all partying. Dining by the roadside, picnics in fields, and a hell of a noise.

Most of the kids had been thoroughly equipped with cardboard horns bearing the RMC logo, and were giving it full belt. I eventually decided to drive with the windows shut and the A/C cranked up to the max – not so lucky will be the thousands of parents between Cholet and Chateauroux who’ll have a hell of a job putting up with that racket for the next few days.

Everyone was in super spirits, and I felt a little of what it must be like in the peloton. People waving at the car from the roadside, clapping and cheering. I even heard one old guy shout: “Allez les presse!” Not something you tend to hear too often, so that was pretty cool.

It’s that magical bubble that ‘privilege’ of any kind gives you. With my press pass and car stickers, I’ve got access. The fans on the side of the road wish they had access, so there’s lots of envious glances. Once again, I’m reminded how lucky I am to be on this adventure. 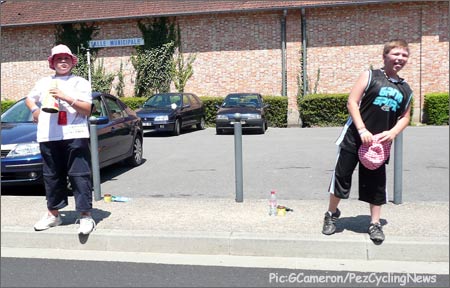 The kids are dancing and waving, and the race is still an hour from reaching them. As well as RMC, the betting organisation PMU have been dishing the freebies like nobody’s business. There are celebrations of giant green hands everywhere.

Funnily enough, there are enclaves of white with red polka dots where Champion supermarkets have had their crews in operation. It’s a micro-advertising war waiting to be studied.

Regional productivity has clearly taken a nose dive because everywhere seems shut down. Tractors and combines are idle in the fields and there’s people lolling around on massive hay bales. 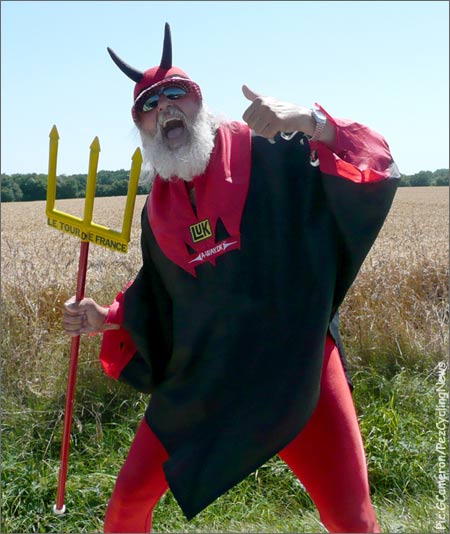 Spotted at last – Gord is officially on the Tour.

This Le Tour is a national party, and everyone’s welcome. And if it makes everyone feel a bit better about themselves and their country, where’s the harm in that? It all looked pretty nice from where I was sitting.

The last significant thing I saw? Parked up at 20kms to go, Didi the Devil, the ace self-promoter. He probably gets photographed as much as the maillot jaune does each year …. and what harm’s another shot for Pez?!

After that, it’s a straight if slow shoot to the parking area and into the press room.

Tomorrow, it’s another big day. I make my Tour debut in the mountains, as stage 6 heads for Super-Besse. With so many guys close on the overall, I’m sure someone will want to relieve Schumacher of his yellow jersey, so excitement is on the cards.