Ed Hood’s right hand man at this year’s Tour de France, Martin Williamson, got quite the eyeful throughout his journey through the second half of the Tour, and lets us in on a few of his thoughts and observations, as we enjoy our final Tour de France wrap.

“Une Annee de Transition” muses L’Equipe this morning. They reckon that this year’s Tour represents a year of transition for cycling, where the “old school” characters involved in the sport either finally have the penny drop that doping is absolutely not the norm anymore, or they get out.

I certainly hope so. The Tour had started hopefully enough, and from a British perspective with Cavendish apparently winning at will, it was great to watch on TV. I’m sorry to have missed seeing those record-breaking days live, but I’m very grateful to Pez for giving me the chance to work on the race for the last week. When Ed and I arrived in Avignon to take over the daily reporting from Gordan, we had missed the doping scandals (and more than ever that’s the correct word, it is scandalous that people are still trying to defraud us), and had the opportunity to witness some good racing and some amazing scenery. I wouldn’t say it has been a fantastic Tour from a racing point of view, but maybe a good one. 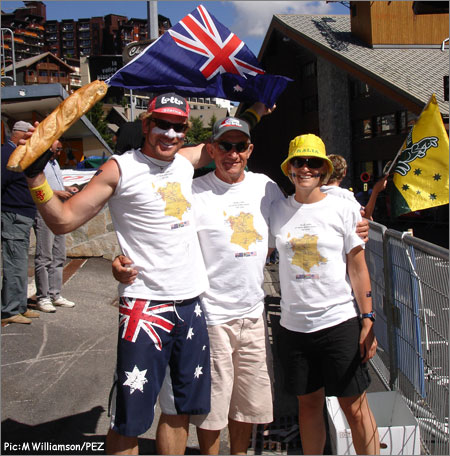 Sastre deserved his win, since he laid the foundations for it with a decisive and brave attack on L’Alpe D’Huez – whilst the rest of the favourites seemed to spend a lot of time riding to each other’s plans, watching one another. As Ed has mentioned before, the famous L’Equipe reporter, sorry – “Special Envoy” – Philippe Brunel reckons that for a Tour to be considered a great one, the winner must “conquer” the race.

As a cycling fan whose seen heroes and people I admire fall foul, get caught, admit transgressions over the years, it’s a struggle to “keep the faith”, to believe fully in what you see. Sometimes it’s hard – Schumacher the best time triallist in the race; twice?

It’s been a quick week, for sure. It’s funny how – without looking at the hundreds of photos we’ve taken to help – each day, unique in it’s own way, tends to blend into the others in retrospect.

Apart from two that is; the Rest Day, when we spoke to several people and had time to catch up with our work, and the day the race went over the Restefond. 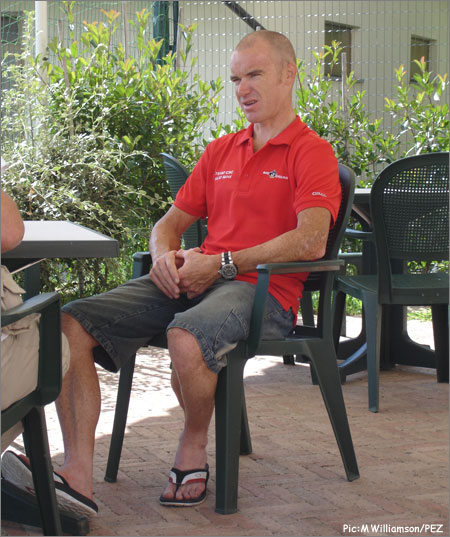 We had arranged interviews with riders Stuey O’Grady (CSC), Dario Cioni (Silence-Lotto) and Adam Hansen (Colombia) on their day off, and with Garmin DS Matt White. To a man, they were generous with their time, open, funny, interesting and good company.

Stuey made sure we got a great interview with him, despite other journo’s butting rudely in and insisting they spoke to him first. 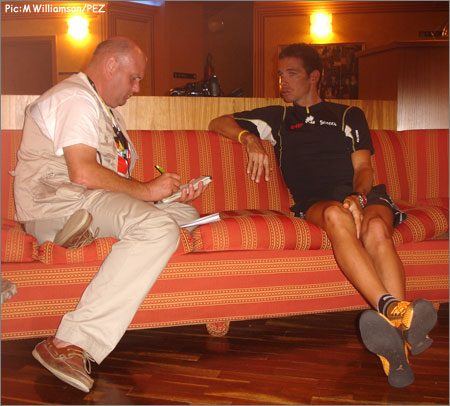 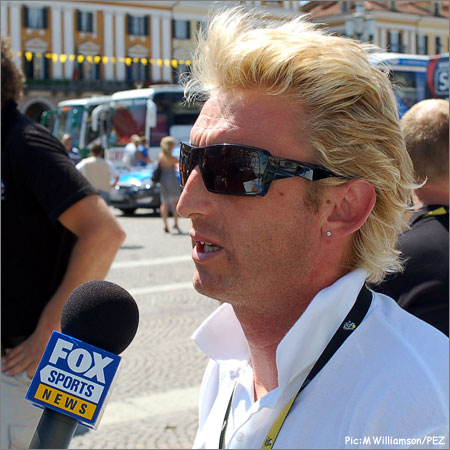 Dario was his usual calm and insightful self. Adam even interupted his dinner to come out and talk to us after we were held up and missed our arranged time, whilst Matty, despite being obviously very busy, chatted openly about team tactics, how happy he was with his boys’ performance in the race so far, and his wife’s chances in the Olympics in the speed walking events. Catching the Lampre boys pottering around Fossano in their bottom gears was cool. 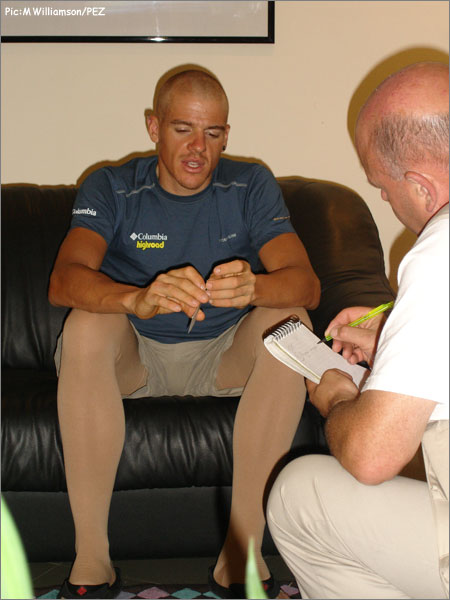 Sitting in the hotel Team Columbia were using that day, using the pc in the lobby, when veteran rider and one of Big Mig’s loyal men Jose-Louis Arrieta (AG2R) – joined us and started talking about computers and websites was great too. He had only been out on his bike for an hour, “…but not hard – only coffee and a look at the chicas” he told us with a smile. He’s been a pro for 17 years so I guess he knows what works for him. 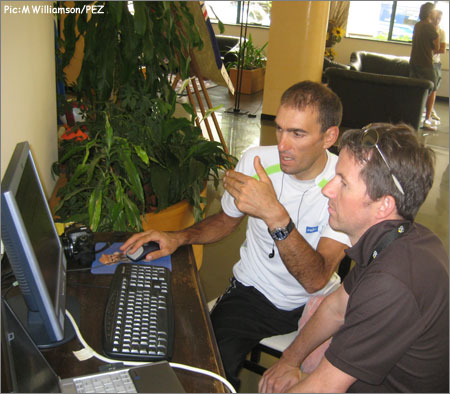 The day the race went to Jausiers was special. We drove the entire course, all but the last 30k of it between the Publicity Caravan and the race. Experiencing the hundreds of thousands of people lining the route, seeing how steep and long the climbs were for ourselves was amazing. We parked the car 3k from the top of the Restefond, and waited for the race to pass. 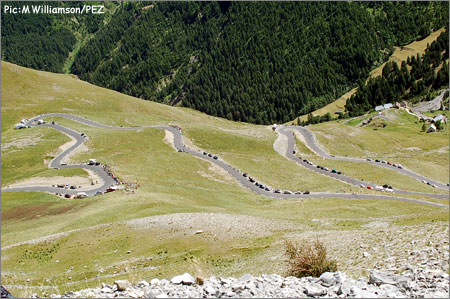 In a flash the break, the chasing group, solo riders and little groups all sped past. Some of the riders sitting up, eating and cruising, safe in the knowledge that once over the top, 18 miles of downhill to the finish meant they wouldn’t lose much more time, and they could start to recover a little, whilst others seemed determined to get back to the group in front and were “paneling” themselves, as we’d say in Bonnie Scotland. I got a great photo (if I say so myself!) of Seb Lang (Gerolsteiner) passing us in a small group and pointing at the road in the distance, “F***ing Hell! We’re going up there!” he informed his colleagues, as they smiled – or was that grimaced – in agreement. 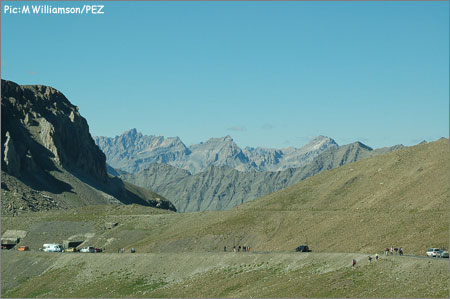 Certainly, Ed and I had muttered the word “Wow” more often today than in the rest of the entire week, as our senses had been continuously assaulted by the hugeness of the scenery that day. We really did feel like we were on the top of the world.

When the Autobus with it’s sprinter-type passengers passed us, we nicked in immediately behind the team cars – once the race is past and the hundreds of camper vans spill onto the road any chance of fast progress disappears.

We hurtled at over 100kph down through the beautiful alpine vista in the convoy of cars, trying in vain to keep up with the riders: absolutely mad driving, very dangerous but totally exhilarating. Bend! Change gear, 2nd, force the Volvo round the hairpin, change up, 3rd, shortshift to 4th… BRAKE!, back to 2nd, force the front wheels to grip, and repeat. For 30k. 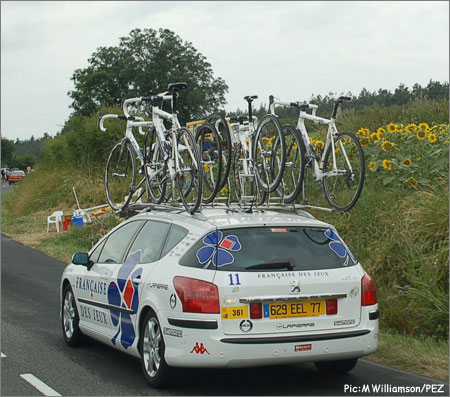 Incongruous amongst the lush countryside the Dukes of Hazzard car horn blasts out from behind us, as the FdJ Team car lets us know they want past! I back off on one of the hailpin bends, and in a flash the driver, in an amazing demonstration of skill and confidence, squeezes the large white Peugeot estate car past us. Within a few bends, he’s past most of the cars, and is sitting pretty behind his riders in the group. 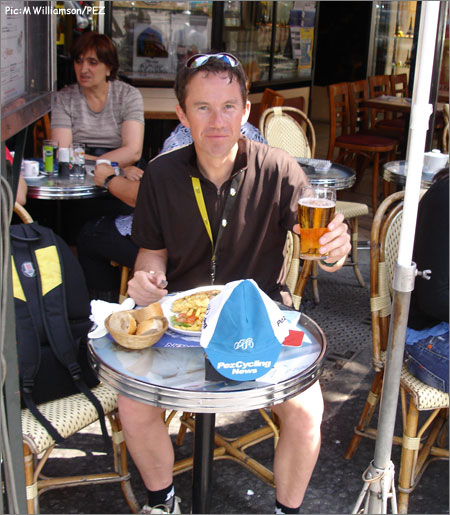 Sitting here outside a cafй in Paris the day after the race has finished, these are the things that will stay with me for a long a time. Here’s hoping there’s no postscript to the race results either.