PEZ Roadside Stage 6: There is an evacuation plan for getting off the summit finish at Super-Besse – riders and buses first. For the rest of us, it’ll be a bit of a wait tonight, but that’s no problem. PEZ had promised me something explosive on the final climb in this volcanic region, so I was fired up for my first real sight of Tour racing! 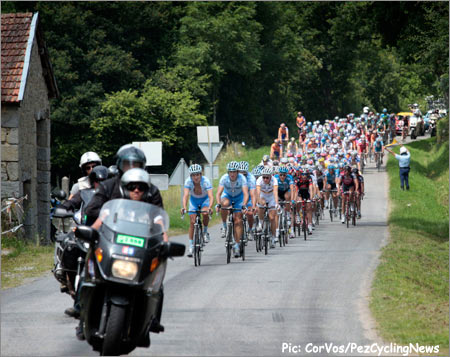 Gord’s day – like the bunch’s – started at a more relaxed pace.

The roll-out was not too early for me today, about 8.45am. I had an ‘itineraire hors course’ to follow which skipped all but the final climb. It’s just a pity there were so many gendarmes moving people on as the scenery demanded its own 4Gb memory card. 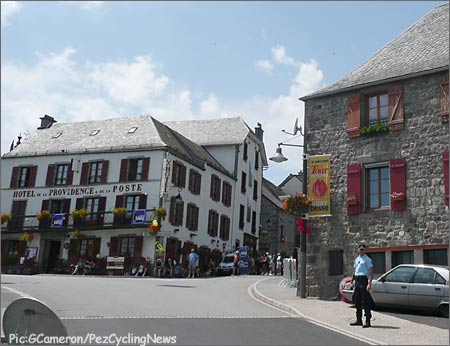 At 4km to go, even we’re only allowed one pic.

I promised one policeman that I’d be a good boy and not leave my car parked on the roadside for more than 20 seconds – but he still followed me just to make sure that I’d take one pic at 4 kms to go and then clear off!

The road up to Super-Besse starts steady then suddenly pitches up. The roads get really narrow too, meaning someone might get into trouble if they’re not right at the front in the last 5 kms. It’s going to be awesome… 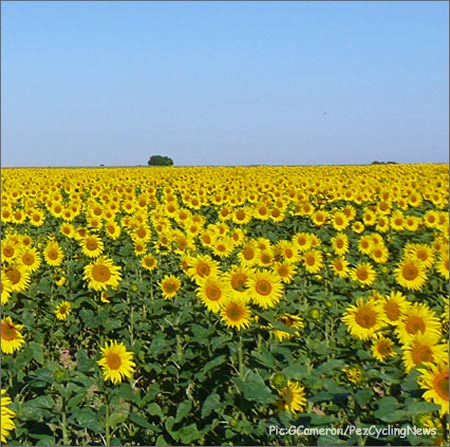 On the way here, I’d stopped just outside Issodoun to take the mandatory TDF sunflowers shot, and one of a Chateau/Museum. Then a break in Pauzat to check out some beautiful, crumbling old buildings and twisty sidestreets, where a squad of Italian journalists stopped for pizza and coffee. 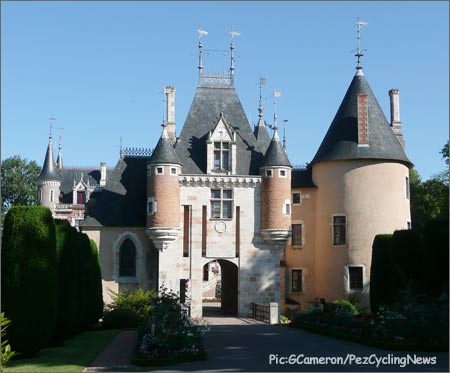 Then into Chameix for the ‘plat du jour’ at the Hotel du Centre. Despite the expression in the self-portrait, the freshest melon, followed by escalope de veau with pates du maison was excellent, if morally dubious nowadays. Strictly no ‘vin du maison’ though. The Tour rule book is correctly explicit about the consequences of this particular sin. 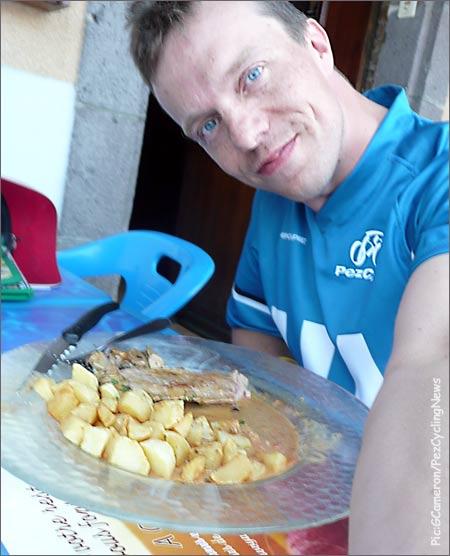 I’d cruised on to the top and then down the other side. The press centre seems miles away, and I’d just parked when a guy from one of the French TV channels came running over. Can I do a favor? Depends. “See that lady …?” – a speck puffing up the road in the distance. “Can you take her to back to the summit?”

I think she was having some sort of asthma episode, so it was no problem. “Au sommet?” She just nodded and climbed in before we ran the uncaring gauntlet of spectators to return to the finish line. Good deed for the day. 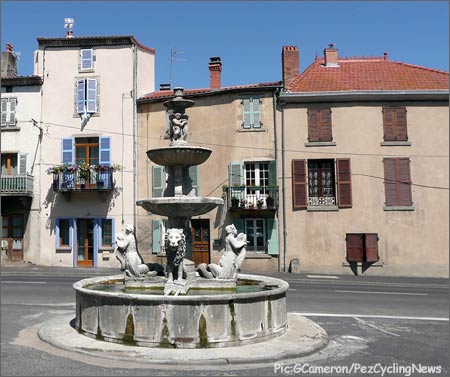 After sorting out my kit at the press room, it was time to stock up on Vittel, plaster on the factor 70 and race back up the climb. Just as I’m stepping out the door, a murmur and some laughter in the press room – Evans has a mechanical. There’s a few partisan souls in here who wear their allegiances proudly, but I can’t say which country they were from…

It was a fair hike, but the crowds weren’t as heavy as up in Brittany, so a comfortable spot was secured at 500m to go. 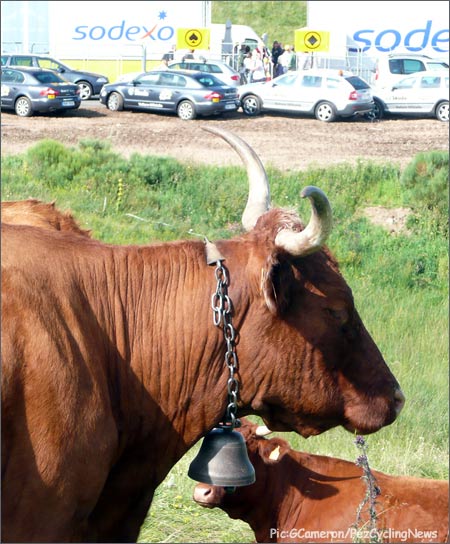 With so many guys close to the yellow jersey, I wanted to be right there to see the action blow up in the final kilometer. I’ve never seen a mountain stage in the flesh before and I reckoned this sweeping curve after the straight drag up to the red kite would be a cool vantage point.

The kids are a bit more restless today because it’s hot and the caravan has gone by. I caught the final unseemly melee as grown men scrabbled for inflatable ‘Tap-Taps’ – maybe they reckon their kids will love them less if they can’t provide some ‘Antargaz’-branded plastic? Or maybe it’s not for the kids? 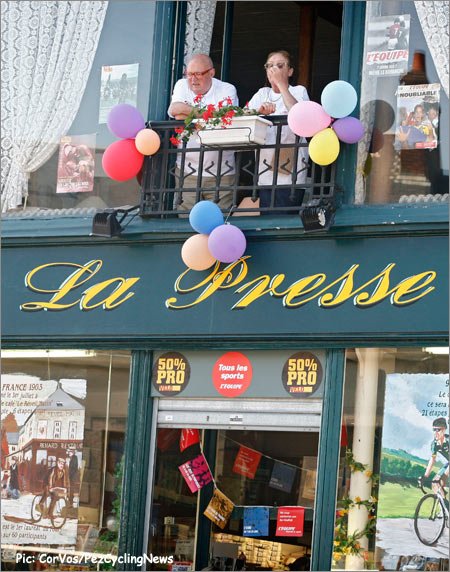 Okay – this is NOT really the press room…

The helicopter thrums into view in the distance as the commentary booms out that there’s seven Ks to go. Folks are packing away their snacks and magazines, except for one little girl nearby who refused to accept that the most famous bike race in the world is bigger than Mickey Mouse.

Cameras are checked, focused, refocused – the motorcycle outriders are as photographed as the riders, mechanical stand-ins for the real thing.

The press cars roar by. The Gerolsteiner bus (with Credit Lyonnais lion in aqua blue hat) toots past. The camera copters roar into position above us …… 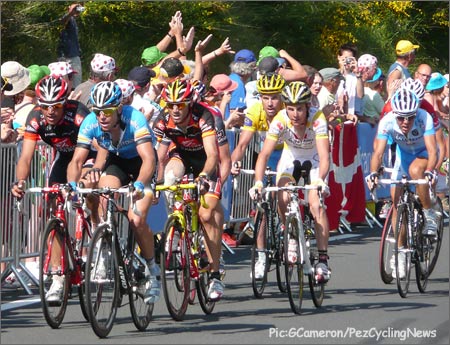 …and there they are! All the favorites going shoulder to shoulder. Ricco’s eyeing Evans and Valverde. Kirchen’s in the frame. A Liquigas – a brilliant Kreuziger, and a Barloworld. Although I can’t see Millar, this looks like a real shootout. I just set the camera to burst and fire, hoping I’ll get one good snap for the story.

Immediately, I spin round to watch them shoot by – it’s not the steepest finish but they’re still out of sight bloody fast. 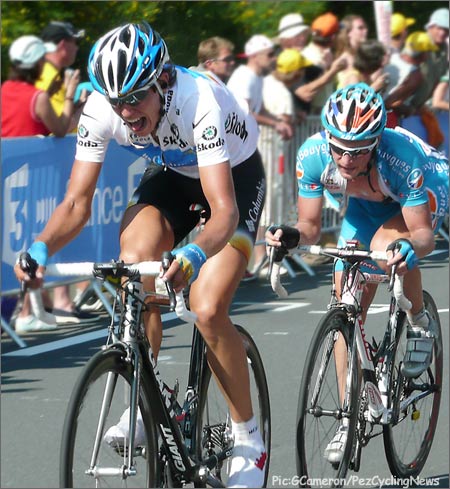 Next up, Lovkvist wrestling with his bike, desperate to stay close, followed seconds later by Eduardo Gonzalo Ramirez, our Agritubel buddy. It’s an impressive ride by both young guys, although one other kid is crucially further up the road. 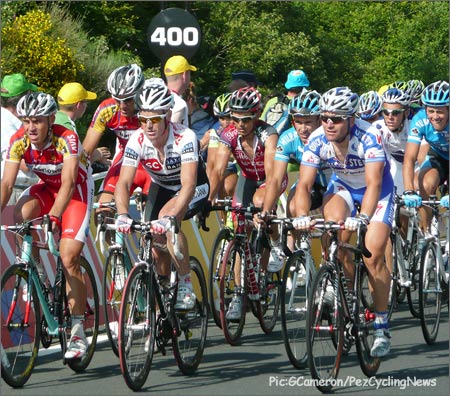 Pozzato coasts past, with not a hair out of place. Not his sort of day today, but he doesn’t seem to be in any great difficulty. Also having a day off of sorts are the sprinters – McEwen, O’Grady, Steegmans all ride by at the head of the ‘autobus’. 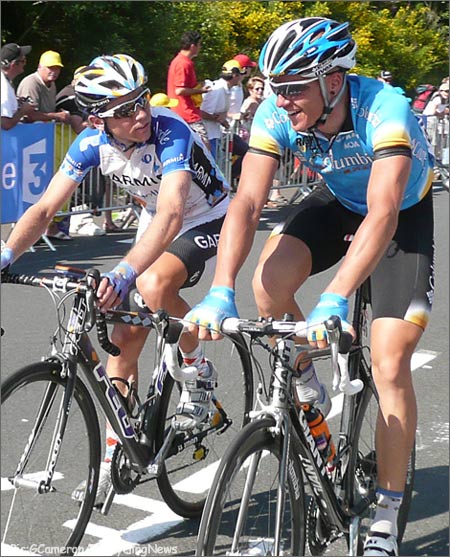 A Slipstream rider chats calmly to Adam Hansen of Columbia, and a Rabobank rider shoots the breeze with a QuickStep as if they’re just starting the stage. 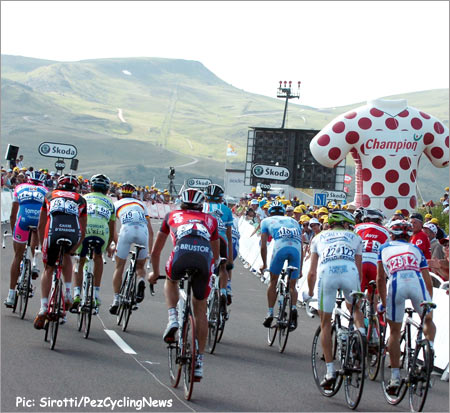 It looked like Fabian Wegmann had had a harder day – either that or he’d forgotten to turn the gas off at home.

It’s been a cracker of a finish, and there’s plenty entertainment for the walk back to the press centre. The bike handling skills of these guys are amazing as they chat, eat, drink, put on warm clothes – all while flying downhill at 70kms/h avoiding the knackered/drunk/inattentive pedestrians also descending. 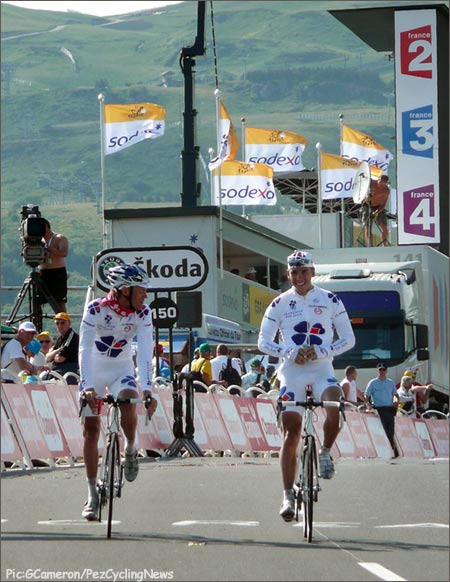 Gilbert casually drank out of a can and laughed with his mate. Voigt and Arvesen looked like they’d been working harder and were still in race mode. 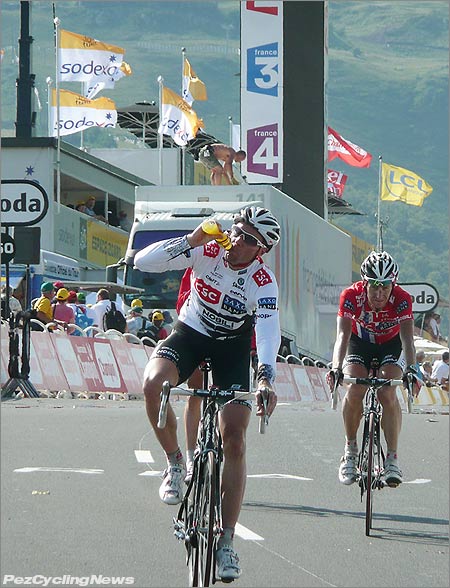 Even the cops seemed to be in a good mood – maybe this guy was getting paid overtime WITHOUT having to direct traffic. 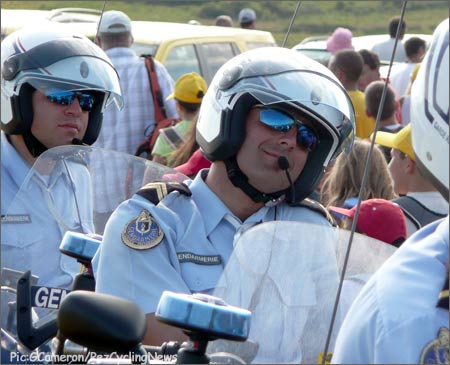 All in all a cracking day in the mountains which has set things up very nicely for Sunday and Monday in the Pyrenees – although tomorrow’s lumps and bumps could cause a surprise if anyone’s under the weather.