Their rivals, Evans and Menchov – the men with the big, slow pumping hearts – will be on the long cranks with the 55 x 11 ratio, maybe even risking silk tyres and praying for one of those, “good legs” days.

Sastre and Schleck will be doing the same, but they will be at a pyschological disadvantage, knowing that the specialists will be clawing time back like hungry dingos, ripping at a carcass.

Sastre only has 1-34 on Evans, that’s less than two seconds per kilometre.
But, if that gap can be widened, or Evans forced to stop following wheels and ride hard, then it’s possible that the Antipodean’s yearly rise up the GC will stall at second.

More importantly, it’s my first chance to sit down with a cafй au lait and a Cognac, watch the racing – and just maybe catch the key moment of the 2008 Tour de France.

At Chavanay just where the climb starts, the hairdresser is coiffing her customers out on the street so they can watch le Tour as the perm lotion does it’s thing; “photo mes dames?”

Pelussin, half way up the col – Restaurant Le 107, the coffee isn’t the best, but the Cognac is ‘parfait!’

My fellow patrons are bierre drinkers, but there’s a bit of creme de menthe about too. It’ll be ‘compatto’ or chaos here, as far as the race goes. If an йchappe goes, then a big bunch will amble up, many minutes behind the break. If CSC are on an ‘exploit’ then it’ll be Jens Voigt’s big square shoulders that coming rocking up the climb first. Cancellara will be gone, he’ll have driven it into the climb and sat up.

Martin has deserted me for two nubile French ladies; I don’t mind, my Cognac has kicked in…

The local guys are impressed that we followed Millar in the time trial at Albi last year and we agree that Vino is a ‘mauvais garcon’ – bad boy! The VIP’s whistle past in big red ASO Skodas as the beers continue to slide over the bar.

Meanwhile, one of my new buddies does the first edit on my piece, carefully reading my notebook and translating for the other two.

I’m not allowed to pay for my next coffee as down the road, the local band gives us Donna Summer’s “Hot Stuff.” The helicopter rotors chop at the warm, heavy air, official cars hurtle past, we go from ‘tranquil’ to ‘attente’ status; all but the most experienced drinkers stand up.

And there they are; a Columbia, and a Quickstep – Burghardt and Barredo.

This morning, we spoke to a whole lot of different people about what would happen today. Many spoke of a CSC mega-attack, after all, that’s why we’re in Pelussin. Barloworld Manager, Claudio Corti saw it differently; “nothing will happen today, everyone is too tired now and the break will go early. But of all the folks we spoke to, he’s the only one who’s been second in the pro championship of the World; he just knows.

In the gap between the break and the chasers I find myself arguing the case for the Loch Ness monster, jeez, that Cognac was strong.

Then there are three more, several minutes back, an Agritubel, a CA and an Euskaltel – Feillu (he’s game, for a sprinter), Le Mevel and Astarloza, his orange jersey completely unzipped and flapping in the breeze, he looks cool. 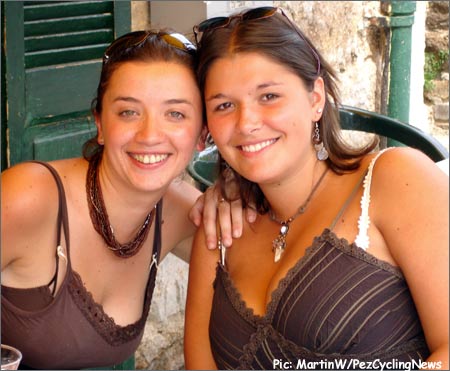 There’s a huge gap to the peloton and Martin’s two female chums are anxious that I include them in my piece; “Laetitia et Noemie” they spell out their names for me as they press their brown bodies against me. “Yes! And I am Maurice!” Growls the larger of the two big boy friends.

It’s a long, long way back to the bunch, it’s tranquil, the maillot jaune is on the front and Oscar Freire sits comfortably, his maillot vert looking safer by the day.

It’s ‘good bye’ time with my proof reading buddies and the girls, the boyfriends lighten up when they see we are going – kisses and hand shakes all round.

Back to the car, but the sag wagon hasn’t passed; another big gap – Lampre!

Five of them, and there’s Cunego, being pushed by a team mate, a nasty looking wound on his chin. [Pez Note: Cunego would later abandon the race after visiting the hospital. Although no broken bones, the scrapes and cuts were bad enough, and he’ll not start stage 19.]

That’s the thing about the Tour, fun, pleasure and laughs roadside, just centimetres away from pain, disappointment and failure out on the tarmac.

Oh! And I think Cadel just won the Tour.