Tour De PEZ: The Roof of The Tour

PEZ Roadside Stage 16: “F***ing hell!” hollers Gerolsteiner’s Sebastian Lang as he points to the road ahead, which disappears around the mountain side, way above us; just like us, he thought you couldn’t go any higher. Welcome to the Col de la Bonette-Restefond, Sven – the “roof of the world!” 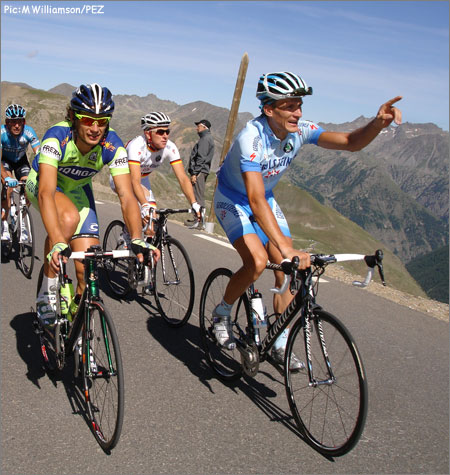 Seven hours previous, I had just ambled out of the Tour Village, the digestion of my fruit salad, sausages and rye bread aided by some nice local red wine.

“How are you, today?” I ask CSC ‘fixer’ and PR guy, Brian Nygaard; “Stressed.” He replies quietly, Jeez, he is human! I can’t complain because he’s just organized for me to get pics of ‘Stuey’s’ bike to go with yesterday’s interview.

Over at Silence-Lotto, our old pal, spanner man Bart Leysens makes no drama out of giving us Dario’s velo to snap. Adam Hansen models his own Giant for us at Columbia, but he’s instantly besieged with fans wanting their picture taken with a Tour star.

Martin becomes Adam’s official photographer as one fan after another hands him a pocket digital and then goes for a cuddle from Adam; “this isn’t my job, guys!”

Dag Otto Lauritzen interviews Jonathan Vaughters over at Garmin; “hey! Dag Otto! I need a photo of an Alpe D’Huez winner!”
He gives me a smile and a thumbs up.

It’s hot and flat out of Cuneo and around 24 K before it starts to climb, nothing drastic, tracking the river valleys, but the peaks to the left and right issue a warning of pain to come. 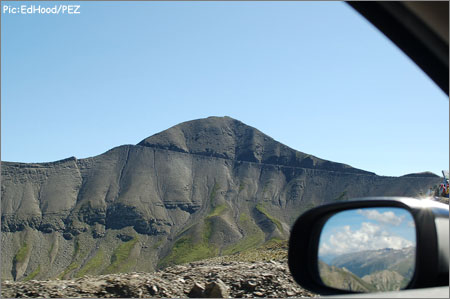 The top of the “Bonette” looms.

It’s wonderful cycling country, nothing too severe in the way of bends or hills, nicely surfaced, cute villages, lots of greenery.

Little shrines and chapels dot the road side, a story to go with every one of them somewhere, no doubt.

A 90km left, the road width shrinks, the mountains aren’t on each side, we’re amongst them – La Lombarda Passe, it goes brutal very quickly, hairpin follows hairpin.

This is the first time the race has been up here, it’s hors category and after a rest day will be a monstrous shock to the system.

The crowd is sparse, but the scenery spell binding as we chase the horizon ahead of us, high and jagged.

We hit a “kids corner” and we get a song from them as the smell of pine needles wafts through the window. It gets narrower as it gets higher, the trees thin and the sky gets ever bluer. 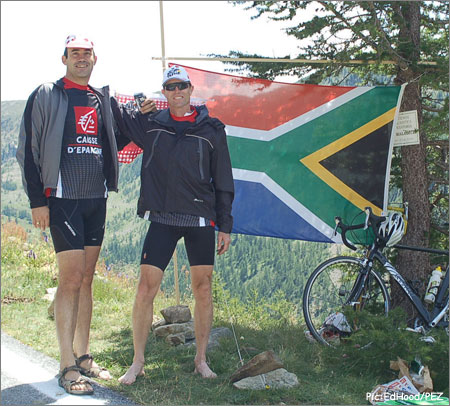 We stop to say “hello” to some Robbie Hunter fans, we’re too polite to mention Duenas. 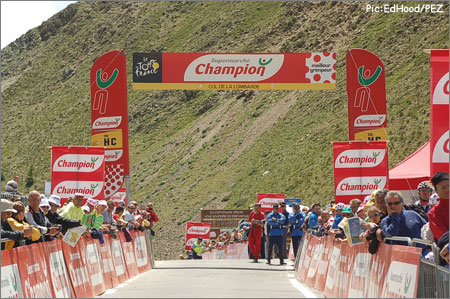 There’s a sign – 5km still to go, wow. The rock formations are spectacular, spikey, with scree slopes, but the ranges stretch away, one behind another, like giant theatre props.

The top is the top, and no messin’ – it’s like the funfare, ‘all the way up, then all the way down;’ we drop back, “en France” just over the top. 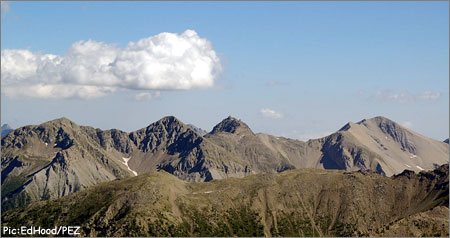 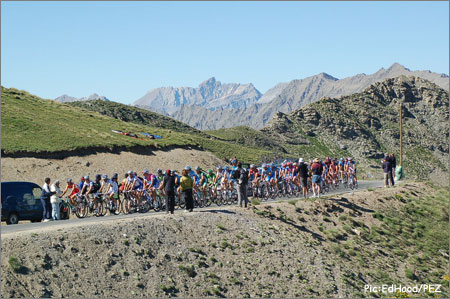 The views are beautiful, but as the clichй goes; “the riders will have no time to enjoy them.”

On the way down we pass through the ski resort of Isola 2000, some of the chalets are beautiful as we drop, ever downwards on empty roads – not a soul in sight.

Former world pro road race champion, Luc Leblanc sums up the feelings of many, certainly the guys at Lotto, when he says; “Menchov, l’adversaire numйro 1.”

Down, down, down we go, to Isola and the feed, if you’re a gallus (Scots word, meaning ‘bold’) descender, a lot of lost time could be clawed back on that drop to the valley floor. 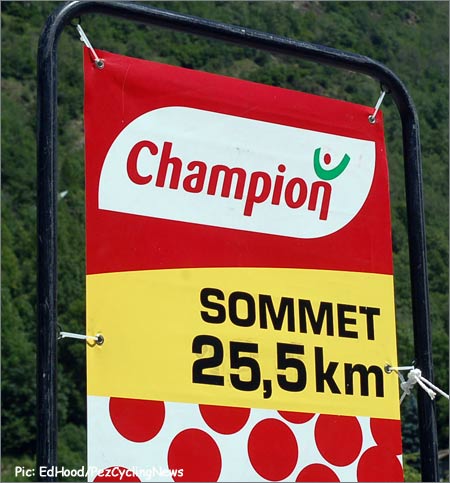 There’s around 24 K from the top to the finis, local man and twice Tour winner, Bernard Thevenet reckons it’s perhaps the most important stage of the race and there’s little time to repair damage done on the climb, on the fast descent to the line.

There’s a Scottish connection here, in 1993 Robert Millar slogged his TVM Gazelle – which he hated, because it was so heavy – over the top in front of the likes of Indurain and Rominger to snaffle the big prime at the top.

Early, it’s long, open, sun baked straights, not too steep, but relentless. The higher we go, the steeper it gets, but with more hairpins in the mix. It’s hard to take in how high it is, we think we’re nearing the top when we spot the board, there are still seven kilometres to the top. 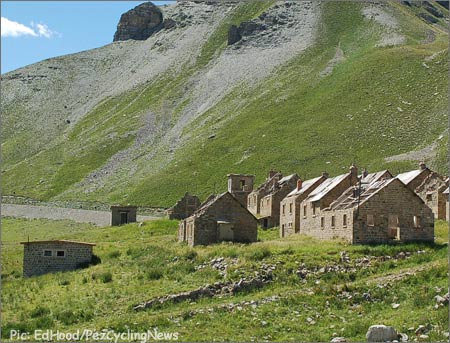 We pass a derelict village, I wouldn’t want to be here at night.

The road is sliced out of the hillside and adjectives become ever more scarce to describe the feeling of other-worldliness, it reminds me of TV programmes about Tibet.

We stop, maybe two kilometres from the top, it’s not just quite so steep here, we want space to see the race and take pictures. The word is that time trial winner Schumacher is ten minutes ahead, with a group, but there are others bridging – including Vande Velde – in the gap.

We get an update, Christian has cracked and is sliding backwards through the bunch, there are nine kilometres of climbing to go, it’s not good news for his DS Matt White who we interviewed yesterday.

Way, way down below us, looking like the models that kids fly in the park, are the helicopters; not long now. The breeze is cool, but the sun blinding at this altitude.

– And here’s what he snapped!

And there’s the leaders, maybe a dozen, Portal, Casar, Big George, a Barloworld. The breeze is behind them and they whistle past pretty quickly for having climbed for 23 kilometres.

Two Lampres drive a little group of around eight, some 45 seconds later, they could catch the leaders on the descent for sure. 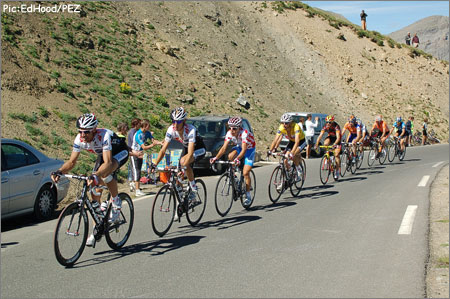 It’s 1-50 before the maillot jaune group arrives, it looks like the main men are all there, but I don’t see Vande Velde.

Nibali, in the white jersey is around four minutes down and French darling, David Moncoutie who’s supposed to win stages like this, trails past at six minutes plus.

Lang – and his fine command of English – comes past in a little group, then there are ones and twos; the gruppetto is more than 25 minutes back.

We hop in the car and tuck in behind the gruppetto.

The last kilometre slices diagonally across the summit, which looks like the old pit ‘bings’ (waste hills) we still have a few of back in Scotland. The crowd is thicker here, but not in my opinion, of the size a stage like this deserves.

The descent is another ‘no messer,’ it starts straight off the top. Photos are a no-no as Martin saws at the Volvo wheel to keep our position in the string; it’s fatal if you lose it and let the ‘civilians’ in.

“Dessel’s Day After Dramatic Descent!” says the Tour communique. For once, it’s simple to find the press room, it’s right beside the ‘run-off’ for the cars, just before the finish.

It’s over today for Brandt, Astarloza, Hushovd, Lefevre, Coyot, Garcia Acosta, Monfort, Augustyn and Chavanel – who’s gallant effort to beat the cut on the stage to Prato means nothing now.

Schleck is still in yellow, Kohl and Cadel are still there at 8 and 9 seconds, but Menchov has lost time and it’s been “Bad day at Black Rock” for Christian.

It’s still wide open, and we have L’Alpe D’Huez tomorrow – I can’t wait!