PEZ Roadside Stage 7: Before heading for the hills again today, I decided to have a roll around the Village Depart to see who was around. I managed to hook up with some folks separated by some weird ‘Six Degrees Of Separation’-type link … then it was off to the misty heights of the Auvergne to watch the latest installment of Tour action …..

…. unaware of the unfolding nonsense down at ground level. The press room is not exactly a-flutter with the news of Beltran’s positive. Resigned faces all around. The guys are just waiting for the official press communique to pop out before they go and recalculate what to write. 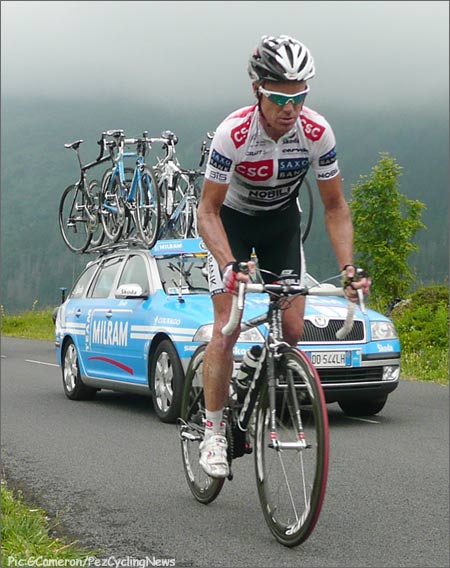 Stuart O’Grady grinds out a lonely tempo on the Puy Mary.

Beltran’s not the only one in the net, apparently. Word is that ‘a few’ guys have been fingered and told to ‘speak to their doctors’. Unfortunately, I reckon we’ll be hearing more of this later.

Things were brighter in the village early on though. I spotted Douglas and Theresa Johnson and little McEwen Louis, named after the great man because he was a last minute arrival with perfect timing. The little guy apparently loves the caravan, but isn’t sold on the riders yet. 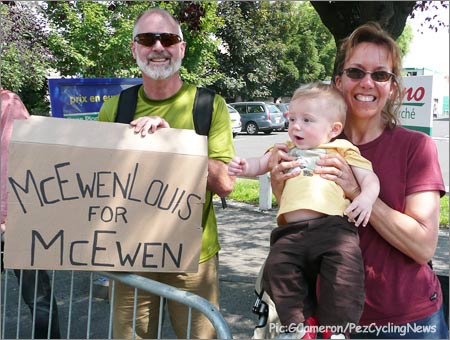 “We decided on the name after watching Robbie win in Canterbury last year! We’re big fans and we want to meet him but we’ve not done it yet.”

How long are you in town? “We’re here for the middle portion … a few stages. This is our second trip to the Tour, but this guy’s first. We’re from Boulder, Co., and we’re looking out for Frankie Andreu, too – our neighbour is a good friend of his.” 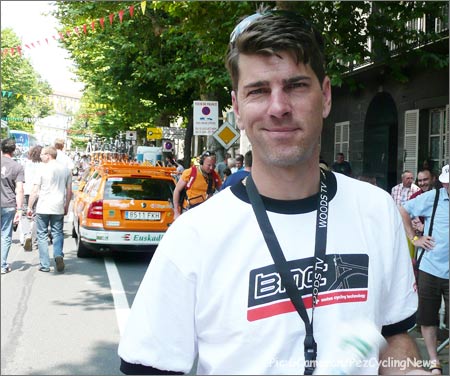 And as if by fate, the next guy I see is Frankie himself! I tell him the folks are around and he says he’ll see if he can swing it to find them. But he’s busy prepping for shooting action. “I’m trying to do Voigt and Schumacher today. Schumacher was almost in tears yesterday, and it’s no wonder. That was a horrible way to lose the yellow jersey.”

How’s the Tour by the way? “Good, working hard. Things are going well. This is your first Tour? There’s a lot to take in isn’t there, a lot of logistics?” 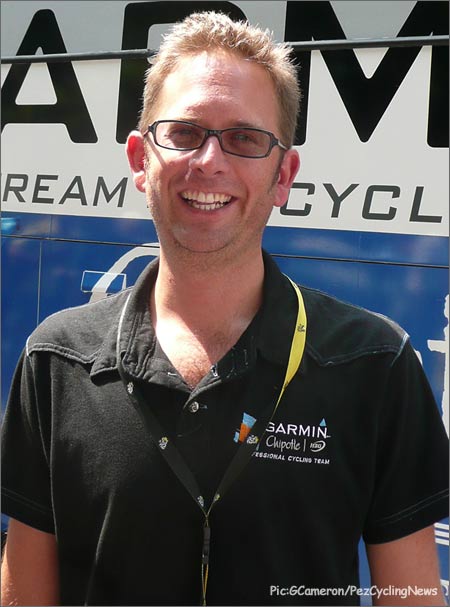 JV cracks a smile for PEZ-Fans!

Nice guy, Frankie – then I hooked up with his old team-mate Jonathan Vaughters. How’s it going? “Good …. morale is great. Everyone seems happy which is good. We’ll just have to see how things go today, and how Christian and David hold up.” 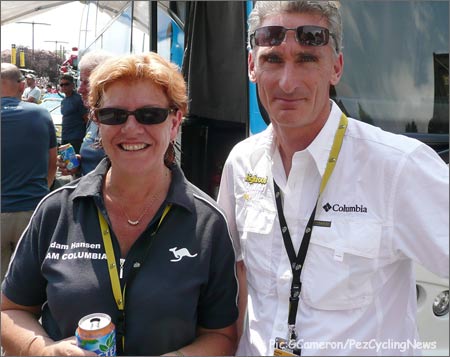 A stroll down to the Columbia bus had me bumping into Gelma Meoli – a daily reader of the site. Why? Because her little boy Adam Hansen was one of our diarists at the Giro. “I’m here for the whole race … it’s awesome Adam’s doing really well and the team’s great. We get to see him a little every night which is nice, but we can’t stay too long.”

“Today is going to be hard. Adam’s expecting a lot of work, because the team thinks attacks will come against Kim.” A quick snap of Gelma and Columbia DS Allan Peiper, then it’s back to the village to see who’s around. 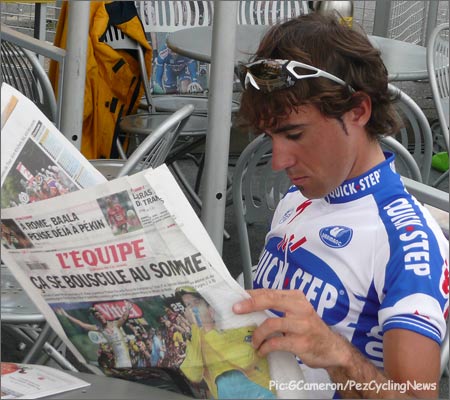 Lots of riders is the answer – Lilian Jegou catching up with his newspapers, just like Carlos Barredo. 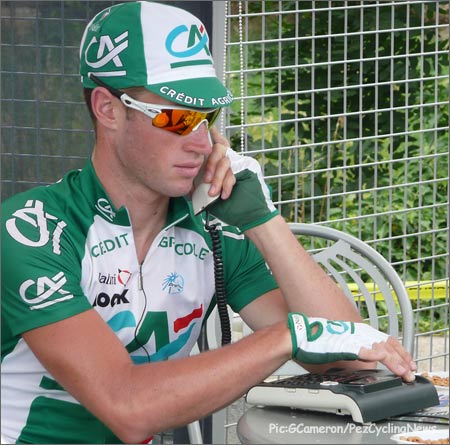 Mark Renshaw was trying to call home – hopefully his folks were still up in Australia.

Brian Holm was also around, grabbing a coffee – “The Tour is going well, but the bosses aren’t happy.” No?!? Why?! “Because we haven’t got the mountains jersey as well!” Boom, boom.

What’s the programme for today? “Well, we expect a hard day …. but we won’t burn the team out defending the jersey. It doesn’t matter just now whether we keep it one day or three days – to have had it is the important thing.” 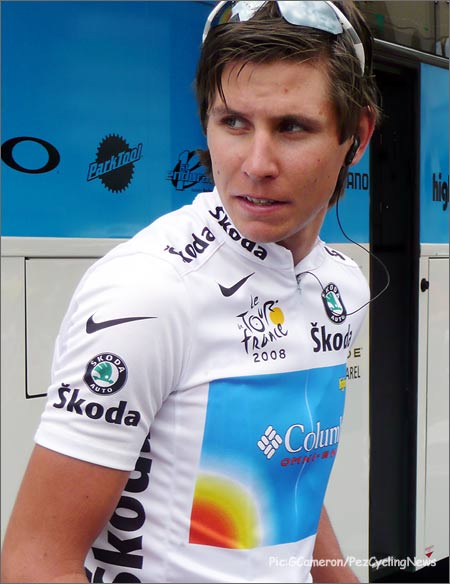 The team’s looking strong with Kim and Lovkvist. “Thomas is super …. the most stylish rider on the bike in the whole peloton.” He could be a grand tour winner one day, I venture. Brian just smiles “Maybe …. maybe. He has a big future.” 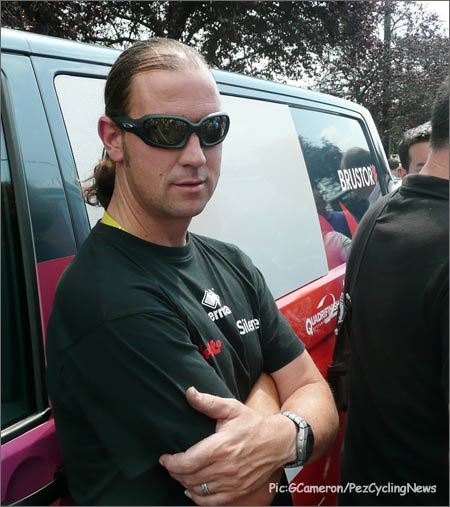 I spoke to Bart Leysen, the Silence-Lotto mechanic, to see how long time Pez friend Bert Roesems is doing. “He’s better … but not quite as good as he was. He had a very bad accident. I hope for him he comes back.” We send Bert our best.

How is Cadel? Is he happy? Bart’s expression doesn’t change, and I can’t tell what he’s thinking behind the shades: “For the moment ….” 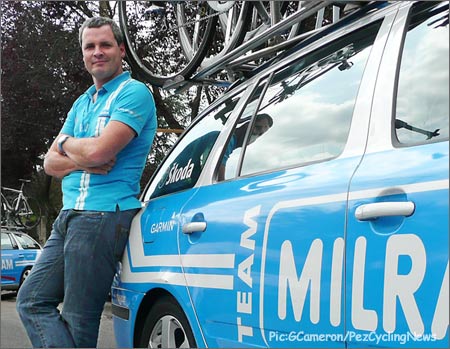 I also grabbed a quick chat with Milram DS Joken Hann. “We’re satisfied so far with how things have gone. Erik is so close … so close in the sprints. The margins are small, and we hope for Erik to win. Also for a breakaway and a stage win. And it would be our target to keep Christian Knees in the top 20.”

Today, Joken was tipping a break to go and maybe stay the distance. 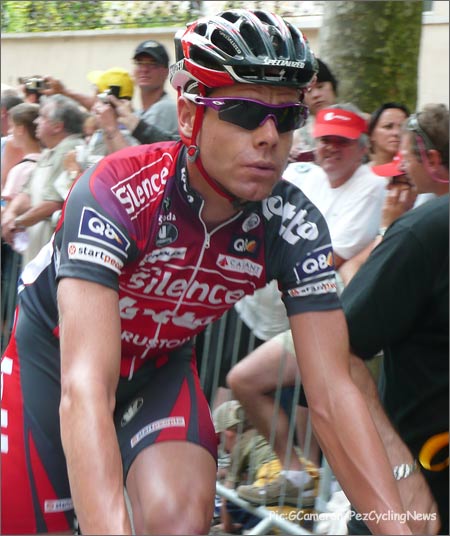 As I was ambling down to the start line, Evans and Valverde were looking ruthlessly confident and happily confident respectively. 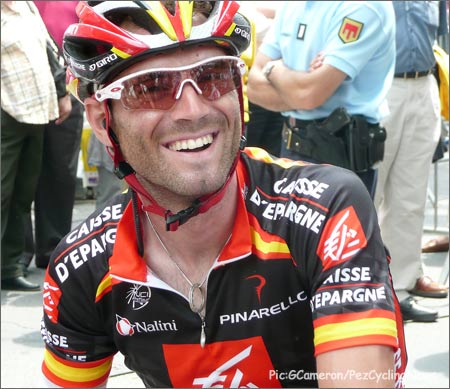 Koos Moerenhout was teasing Nicolas Jalabert:: “Today is your day. All your team-mates have been in breaks. Now, your turn …!”

“It was nearly me yesterday!” laughed the younger brother of Jaja. 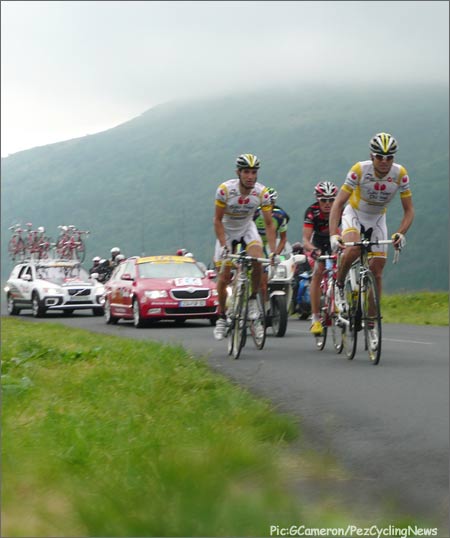 With that it was off to the car, and a race along the off-course itinerary. The stage was only 159kms so there wasn’t a huge amount of leeway to get where I wanted to be. Unfortunately, I got directed in behind the caravan when the race route and the off-race route came together in Murat. Not part of the plan at all, but it gave me time to spot a decent photo location as the little KIA car crept skywards. 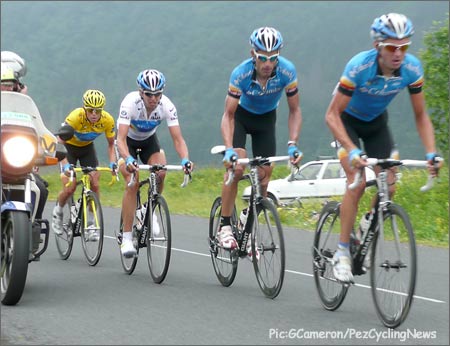 Kirchen is well looked after.

I opted for a lay-by about 2.5kms from home – easy parking, and not too many crazies jumping in front of the lens. It was all pretty tame in the end. The break came by. 11 minutes or so later, the bunch, with Columbia stringing it out. The air was chilly and the sky grey … it was a portent of the bad news to come. 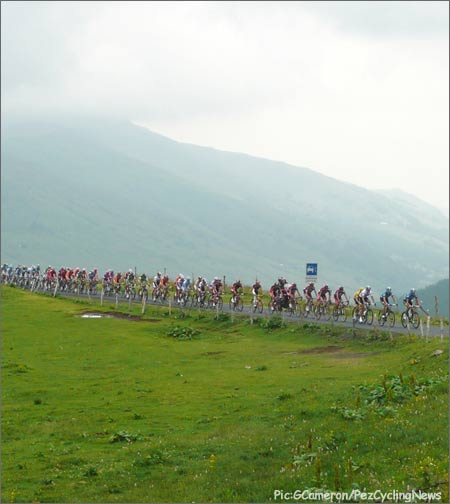 Then a couple of stragglers which the horses in the fields came to check out. The mist closed in a bit so the scenery turned into an ominous haze, which made for tricky driving – combined with the odd spectator ambling contentedly down the middle of the road. 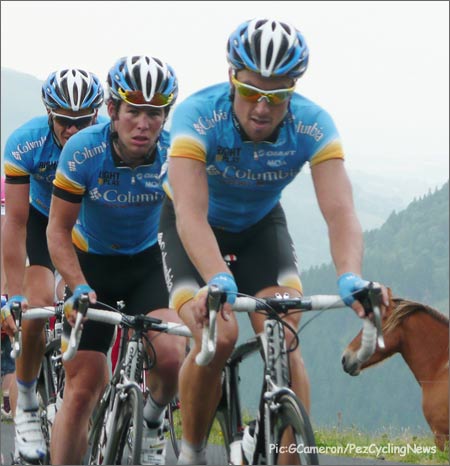 Two things to see here: Cav’s face as he clings to life through the mountains, and the horse.

A mountain day which has all ended in a bit of an anti-climax back down in reality. The official press communique has just arrived: “The organization appreciate the efficiency of the system set up by the AFLD but regret that some insensible riders have not understood yet that the fight against doping was total, and that the noose is tightening on the cheaters.”

One of the British guys here said that Liquigas were packing up and going home en-masse but I’m not sure if that’s the case yet. No-one seems in any way surprised. We should all just cross our fingers and hope that teams up at the top of the squad classification are genuinely doing the right thing.

——- Just in at posting- —-
Press Release
Liquigas Team retires Manuel Beltrаn from the Tour de France and suspends him. If the counter-dope test will be positive, the rider will be immediately dismissed

11 July – After the announcement that Manuel Beltrаn resulted ‘positive’ after a dope-test carried out at the end of the first stage of the Tour de France, Liquigas Sport S.p.A. makes arrangements for down revocation of the athlete from the race and his suspension – as agreed with organizing – to be done. If the counter-dope test will confirm Beltrаn positiveness, the Team will act with his down dismissal and could sue the rider for damages.

Team manager Roberto Amadio says that he is “shocked for the news. We wait for the result of further provided checks and at the same time, even though with regret, we prepare ourselves to take on strict disciplinary measures, according with the values that our team has always respected”.
————