Tour De PEZ: Quite A Day!

Ed Hood’s partner in crime at the Tour de France, Martin Williamson, checks in today with his perspective on what proved to be once again a wild day on Alpe d’Huez. “It was quite a day today – some great racing, and a new yellow jersey. For me personally, it was a day of good fun, and some surprises.” 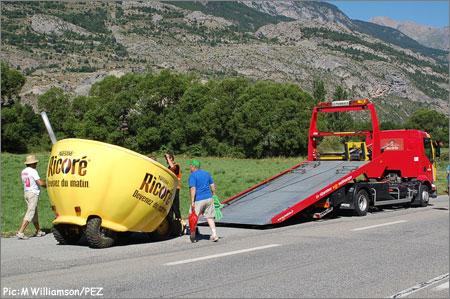 We set off at 8.00am sharp this morning, to head to the start and drive the course – but only as far as the start of the Galibier – where we took a shortcut over to Bourg D’Oisans and Alpe D’Huez. ASO had issued a communique asking all the race followers to be at the foot of the Alpe by 12:30, to make sure that everything went smoothly for the race. 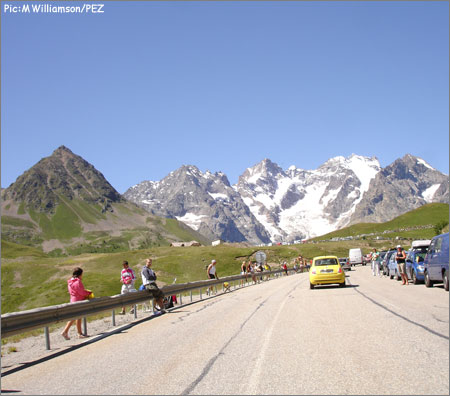 The scenery was amazing as we approached the Galibier. The car reported that the day was already very hot: 24 degrees, and yet there’s snow on them thar hills! 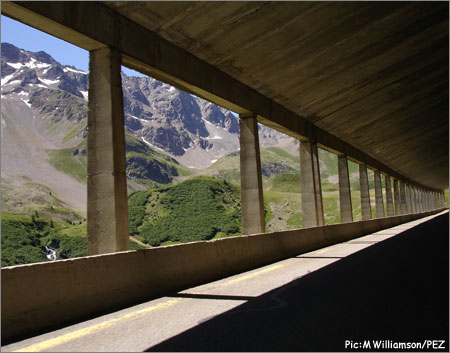 I had to take a photo from the famous Galibier tunnel as we drove just behind the Publicity Caravan. Ed’s written about the Car Press Creds (stickers to you and me) before, and it can get quite complicated, but the short version is: we didn’t have the correct colour to pass the Caravan, but we could be between it and the race, no problem. 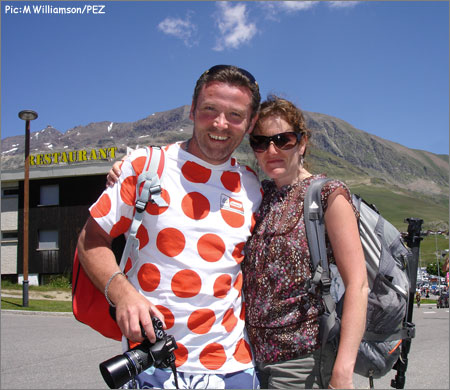 I’d arranged to meet a good friend of mine Steve, and his lovely new wife Katharine, on their honeymoon, at Turn 9 on the Alpe. And there they were! Looking very happy and relaxed, they climbed into the car as Ed got out. He was going to walk to the summit and do his own thing today, and Steve and Kath wanted to see the top. Finding the Press Car Park was easy, and we headed for a beer, and a Croque Monsieur, and a catchup. 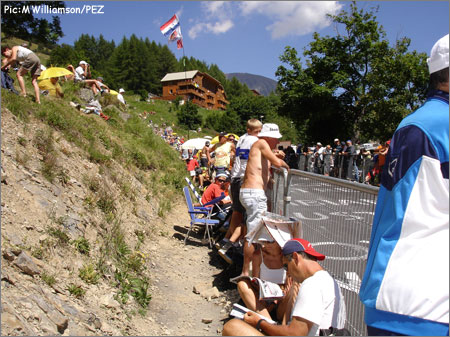 We decided to wander down the hill towards Ed – it’s only a few k’s right? – piece of toffee. Wrong. Even though the crowd was only one deep for most of the way, it wasn’t possible to make fast progress. Whereas the last 2k’s of most stages are “barriered”, on the Alpe the race had put barriers up for the last 5k’s – presumably to prevent any Guerini – type incidents happening again, and these barriers left only a couple of feet spare.

After 2k of this, I realised that when I met Ed, I was only going to have to traipse (Scottish: meaning walk under duress and in some discomfort) all the way back up again, so I decided to phone him and say “see you at the finish”.

Steve and Katharine continued their own trek down the mountain, with Katharine unsure that walking all those dogs everyday was sufficient training for this. They had parked their camper in Bourg d’Oisans, and so had about 9 miles to go, so I said my cheerios, and agreed to meet up again in Paris, if our schedules allowed. 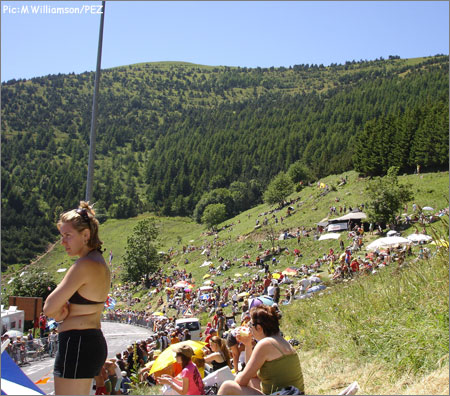 Walking up the hill, I was aware how quiet everyone was. That is, until I turned a corner and saw hundreds of Flemish folk parked up on the hill. There were a couple of tents higher up, with a great sound-system belting out what are presumably Belgian hits from the past (or maybe it was the current top 10, I’m not sure). In any case, everyone around me knew the words, and were clapping and singing along – a great atmosphere.

The smell of burgers and onions on the barbeques filled my nostrils, and I suddenly realised that I hadn’t eaten anything today – we skipped breakfast at last night’s hotel because the place just didn’t inspire us at all and got on the road as soon as we could. I said to Ed this morning that the hotel reminded me of what a borstal would be like (a “bad boy’s school” as my mum would have called it).

I made it to the last K, and the going got a little easier, due to slightly more room behind the folk, and due to there not being the hundreds and hundreds of people that I’d expected. I remember watching Lance charging up the Alpe a few years ago and seeing what was apparently a million fans at the roadside, 10 deep. Today, I don’t think I saw anymore than one deep, apart from a couple of corners where the Dutch and the Flemish folk were partying. 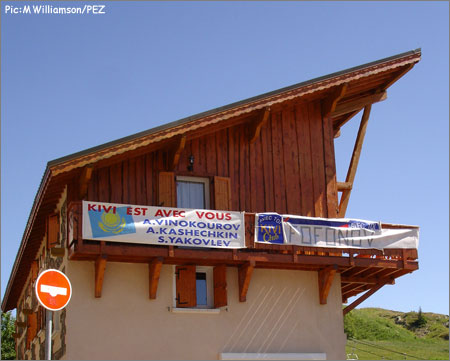 Ed and I had chatted earlier about his experiences on the mountain, and when we were driving up the first few turns he was amazed at the lack of numbers. I wonder if the sport’s constant battle against against the dopers and the continual disappointments fans have to put up with is having an impact. 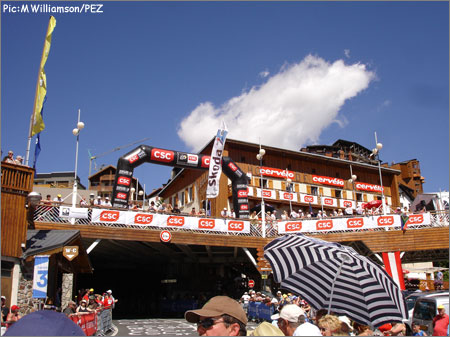 Just inside the final kilometre, I heard Dave Harmon’s familiar voice coming from above me, and looking up I saw the entire bridge across the race course had been taken over by the CSC and Cervelo corporate hospitality efforts. What a great view these guys would have of the race. It wasn’t Dave in person, but the VIP’s watching Eurosport in their exclusive viewpoint. I loitered for a while to get an update of the race – Sastre out front and a minute 30 up – wow.

Meeting an Australian couple living in Edinburgh (where I live) was really good fun, nice guys. After sitting next to someone on the plane on the way over to Avignon last Saturday who works in the same company as me, I wondered if there were any more coincidences to happen. 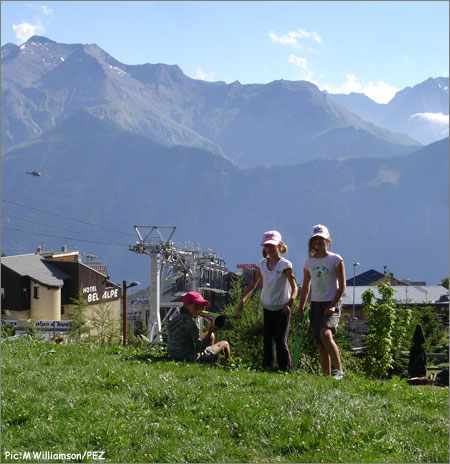 I spotted Ed meandering up the road, and we hooked up. We found a spot on the barriers with about 500m to go, and a lady next to me asked about the working on my Triathlon T-shirt. She’s Scottish, like me, and called Joanne. Turns out, my girlfriend taught her two girls to swim.

While Ed practices his zoom and motor-drive camera tactics on the motorbikes tearing past, I find myself telling Joanne about cycling, and the Tour – she knows nothing about it but has a house nearby! Wow #2. 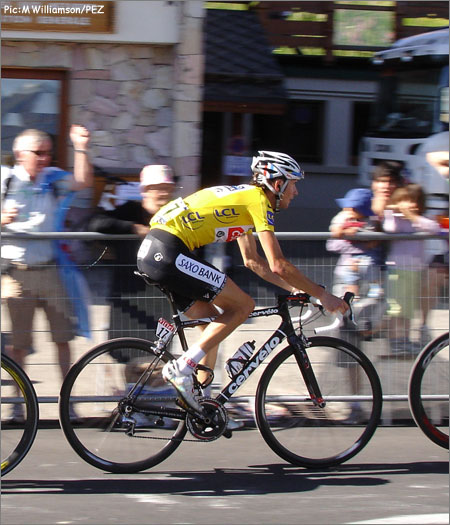 All of a sudden, the police bikes are past, and here’s the race. Sastre, on his own, looking really smooth. We’ve a watch on him, and it’s 2 minutes before Schlek and co. are ripping past, He must know he’s handing over the lead to his teammate now.

We wander around the back of the finishing enclosure, where the press grab riders as they cross the line and try to get a word from them. The ASO security guys are on the case here, and seeing our pass colour is a lowly green, they invite us to move away.

Undeterred, we go further along the fencing, and try our luck with a Gendarme. He doesn’t scrutinise the passes as much as the others, and waves us through, whilst holding back the fans. Ed whispers “I love it when the police aren’t gen’d up on the pass colours”. We watch as riders filter through the police corridor and out towards their team cars, each face telling the same story: “that was brutal”.

Back to the Salle de Press, and the hardest job of all – scan through the hundreds of photos we’ve taken, and choose just 10 to send to Pez. As you can see, I didn’t quite manage that! The Press Room is quite an experience in itself – hundreds of journo’s typing away, focused on beating those deadlines.

Tour De PEZ: On The ALPE!