1984 was a banner year for the wiry Scotsman, Robert Millar. A stage win, the King of the Mountains, and a spot just off the podium further stamped the seal of greatness on his slight shoulders. Ed Hood looks back at the 1984 Tour and the man who seems to have defined the word, enigma, for bike racers: Robert Millar.

Peatman’s Brae; the long drag that hauls up from the village of Thornton to my home town, Kirkcaldy in Scotland. It’s the last mile of the Kirkcaldy and District Cycling Club’s 40 mile road race; the year is around 1976 and I’m on the attack from the winning break. I know that my former club mate and ex-Scottish junior champion, John Davidson will beat me in the sprint, so I have to try and go it alone. They pull me back and have to settle for fourth, but John doesn’t win. The victory goes to a skinny, unhealthy looking junior from the Glasgow Wheelers – Robert Millar.

Fast forward a handful of years to 1984 and there, filling the TV screen in front of me is the same Robert Millar. It’s the final time trial of the Tour de France and Millar is clad in a red and white polka dot skinsuit; defending his fourth overall with great panache, the King of the Mountains is in the bag.

Tomorrow he’ll stand on the podium in Paris as the first – and still the only – English speaking winner of the ultimate climber’s accolade. 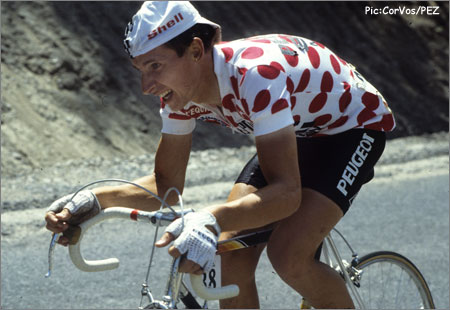 I can’t remember what I did that Sunday.

Millar was an enigma; smart, dedicated, talented, fast, reed slim but strong – his tiny body just soaked up the training hours – introverted, solitary, sometimes extremely rude but defended staunchly by his friends. He was a quality bike rider; despite his never having the personality to impose himself upon a team and be a proper ‘capo,’ he managed two overall second places in the Vuelta; a second place in the Giro and a fourth in the Tour. He also achieved stage wins in all of these races, not to mention a clutch of excellent results in ‘lesser’ stage races, including overall wins in the Dauphine and Vuelta a Catalonia plus runner-up spots in the Tour de Suisse and Tour de Romandie (twice). 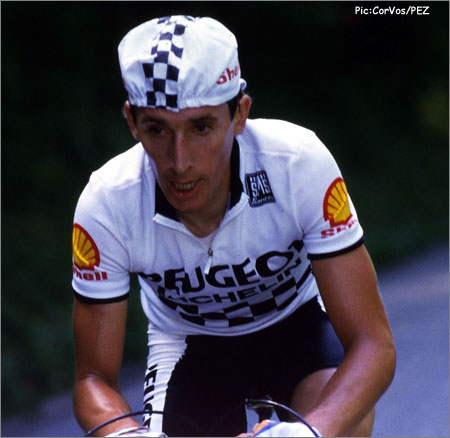 The 1984 Tour kicked off with a prologue in the Paris suburb of Noisy le Sec, where ‘The Badger,’ Bernard Hinault took the fourth of his five prologue wins.

It was a sprint-fest for a day or two after that – BIG Frank Hoste; Marc Madiot (the same!); the ttt went to Renault; Ferdi Van Den Haute kept the Belgians happy and then came the big surprise – Renault’s Vincent Barteau was part of a three man break which was allowed to go to 17-45 and stay there. Much of the rest of the race would consist of the “heads” – including Barteau’s Renault boss and eventual overall winner, Laurent Fignon – chipping away at those 17 minutes.

Stage six saw Stephen Roche stop at the roadside to see his new born son, Nicholas (now a pro with Credit Agricole). But the bunch stepped on the gas and Roche had to chase hard to rejoin – there’s not much sentiment among those pros.

Fignon won the time trial, and Jan Raas won the – wait for it – 338 kilometre etape from Nantes to Bordeaux in nine hours and forty minutes; that’s a man’s stage!

It would be stage 11 before Millar laid down his first hand – a royal flush in the form of a stunning solo victory at Guzet Neige, second was Luis Herrera and third Pedro Delgado. Jean Renй Bernaudeau was fourth on the stage and was wearing the polka dot jersey of best climber; but Robert had plans for that jersey. 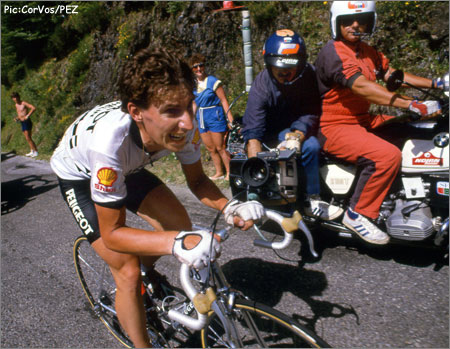 There were French stage wins for Pascal Poisson, Pierre-Henry Mentheour and Frederic Vichot – yeah, the home boys used to win a lot of stages back then! And Fons De Wolf of Belgium forgot about cars and girls long enough to win one too.

Fignon won his second time trial and the scene was set for stage 17 to L’Alpe D’Huez.

Millar didn’t disappoint, on the offensive all day he finished the stage fourth behind Fignon, Hinault and Lemond. But more importantly, he’d amassed enough points to take the polka dot jersey.

The next day was another beast, 185 kilometres to La Plagne with a mountain top finish. Millar’s future boss, Panasonic manager Peter Post predicted that the Glasgow man would collapse after his efforts of the previous day. Millar responded with fifth place on the stage and a consolidation of his King of the Mountains lead over Pedro Delgado. 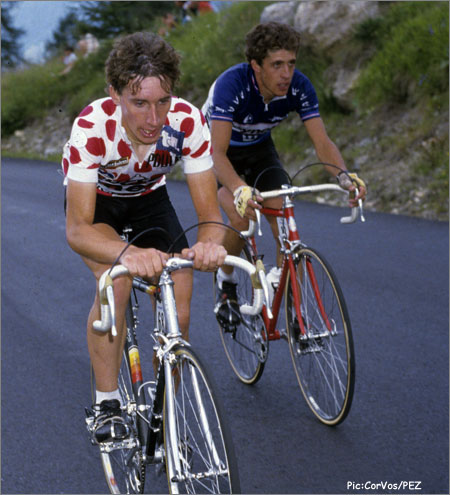 Hoste took another sprint – he would win the final green jersey. And Fignon took the last time trial, albeit on the same second as Sean Kelly. The Irishman was diplomatic in defeat; “I am convinced it was fixed in the favour of Fignon!” Millar was an excellent seventh, consolidating his fourth on GC.

All that remained was for Eric Vanderaerden to win a desperate sprint on the Champs Elysees and for Laurent Fignon, Frank Hoste and Robert Millar to enjoy the view from the podium.

Like I said, I can’t remember exactly what I did that Sunday, but I remember the lump in my throat as Millar waved those flowers!